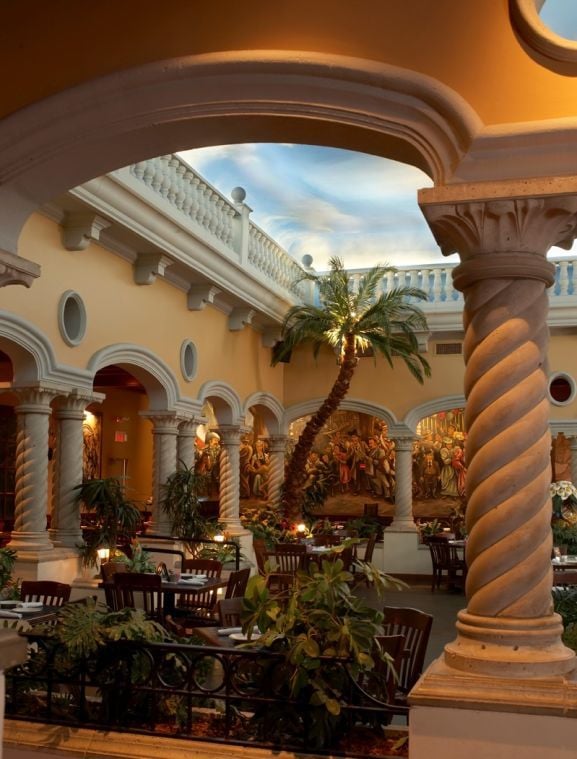 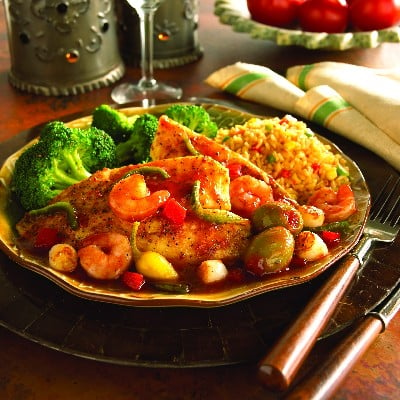 The Tilapia Veracruz is a filet of tilapia sauteed with shrimp, scallops, tomatoes, roasted Poblano strips and olives,

The Tilapia Veracruz is a filet of tilapia sauteed with shrimp, scallops, tomatoes, roasted Poblano strips and olives,

Walking into Abuelo's Mexican Restaurant is like stepping foot into a Mexican oasis. Thick, swirled white columns and arched walls surround the dining room. Leafy green plants and tall Mexican statues can be found throughout the building.

But the crown jewel is the domed ceiling in the center of the restaurant that's adorned with a sky mural hand painted by Texas muralist John Russell Thomasson. The ceilings are done in the style of Diego Rivera, a prominent Mexican muralist from the early 20th century.

"The whole restaurant is supposed to be an homage to Mexican art history and Mexican history," said Kevin Barthauer, general manager of Abuelo's in Warrensville Heights.

Abuelo's, specializing in authentic and creative Mexican cuisine, first opened its doors in 1989 in Amarillo, Texas. Since then, the casual-dining chain has expanded to 40 restaurants located in 15 different U.S. states.

The first Abuelo's opened in Ohio was in 2004 in Columbus, followed by a restaurant in Mason, near Cincinnati, later that year, and Dayton in 2005. The Abuelo's in Warrensville Heights opened in 2006.

Barthauer, a native of Dayton who lives in Mayfield Heights, has been with the company for seven years. He was first hired as a manager in Indianapolis.

"I found the company and they really impressed me," Barthauer said.

He spent a couple years at an Abuelo's in Detroit before transferring to the Warrensville Heights location, where he has been worked for three years.

Abuelo's brands itself as being on the leading edge of Mexican cuisine. The restaurant uses fresh produce and almost every meal is made from scratch.

"The cooks literally make all the sauces every day from scratch ingredients," Barthauer said. "It's actually quite impressive to watch these guys cook."

The restaurant typically draws in families and Barthauer said children love the restaurant. Besides a kids menu filled with Mexican and more conventional options, the decor always catches their eye.

"I have little boys and when they were fairly young I would tell them that Abuelo's cut out a piece of the sky," said Barthauer referring to the sky painted ceiling. "It's a sense of wonder when the kids walk in."

Barthauer believes what sets Abuelo's apart from other restaurants is its house specialties. He said the restaurant uses Mexican ingredients, but experiments and tries to use the ingredients in creative ways. For instance, the restaurant takes advantage of the French influences that are often found in Mexican cuisine. Barthauer said that the menu at Abuelo's includes special sauteed and grilled items that are not typically found in other Mexican restaurants in Cleveland.

One of the most popular items on the menu consistently is the Tilapia Veracruz, a filet of tilapia sauteed with shrimp, scallops, tomatoes, roasted Poblano strips and olives, and served with a spicy red sauce, seasonal vegetable medley and cilantro lime rice. The menu item started out years ago as a chef's special and due its popularity has been a menu staple ever since.

"I've never had anything like it anywhere else," Barthauer said.

With an emphasis on authentic Mexican food, Abuelo's is doing its part to represent Mexican heritage.

"The point is there's a lot more to Mexico than what's presented in most Mexican restaurants," Barthauer said. "The Mexican people have a great and proud tradition."