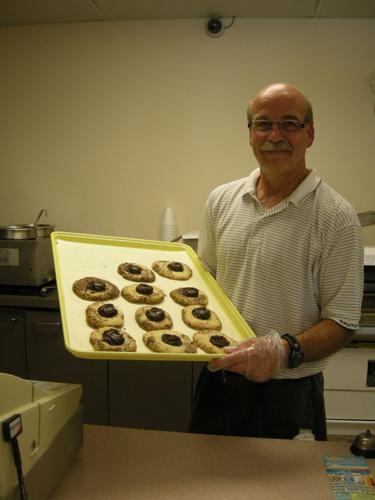 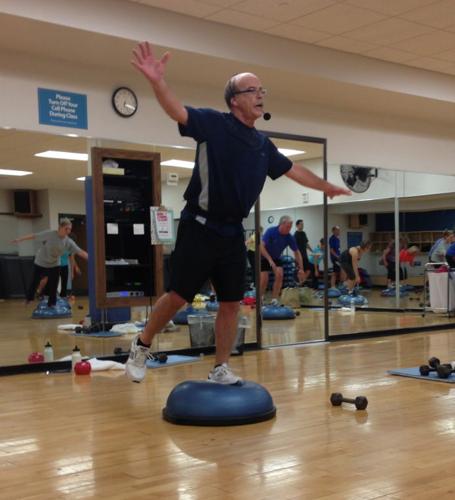 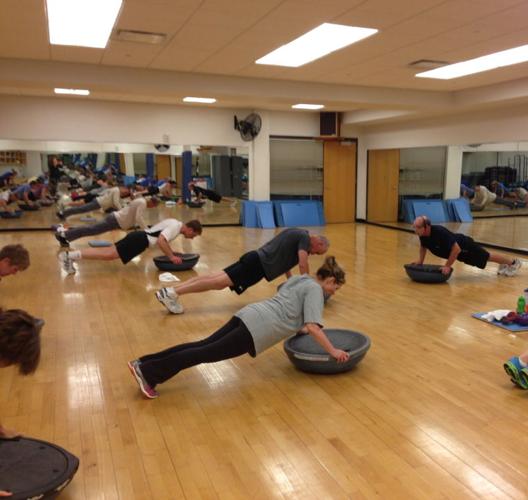 Joel Davis conducts his 6 a.m. BOSU sports conditioning class at the Mandel Jewish Community Center. He has been an instructor at the JCC for almost seven years.

Joel Davis conducts his 6 a.m. BOSU sports conditioning class at the Mandel Jewish Community Center. He has been an instructor at the JCC for almost seven years.

At 6 every Thursday morning, a booming, drill sergeant-like voice can be heard echoing throughout the lower level of the Mandel Jewish Community Center in Beachwood.

“Let’s go. Come on. Push it!” shouts Joel Davis over the pulsating, aerobic beats that accompany the BOSU sports conditioning class he conducts.

The “6 a.m. group,” as the class dubbed itself, follows Davis’ lead throughout the one-hour class, standing on the half-moon shaped BOSU balance ball while lifting weights, stepping up, down and side to side and engaging their core muscles, all for the sake of better balance.

As in his exercise class, Davis runs Cleveland’s iconic Davis Bakery & Deli with one goal in mind: customer satisfaction.

“Your goal is to keep them happy,” Davis said. “I try to keep my customers at the bakery happy, and I want the people taking the class at the end to feel like it is a rewarding experience.”

Davis’ passion for fitness is one and the same as his passion for his family and the legacy bakery his father and his brothers started. After his exercise class, Davis arrives at the bakery at 7:30 a.m. to make sure everything is where it's supposed to be before he begins the administrative duties he learned from his uncle upon joining the family business about 38 years ago.

Growing up in the bakery business

As a kid, Davis used his class-clown antics and sense of humor as a sales technique at the bakery.

“I remember as a kid working the sidewalk sales at the shopping centers,” he said of his boisterous 11-year-old self. "I wasn't shy and wasn't afraid to get in front of customers. We would actually have a microphone and I would get on the microphone chanting, five loaves of bread for a dollar. When I was a kid, we had a lot of stores and a lot of sidewalk sales.”

The bakery had 39 stores and 450 employees when Davis was a teenager. “North, east, south, west, Davis Bakery is the best” was the fitting slogan found on bakery boxes at the time.

Davis, his sister Janice, Ben Davis’ son Sheldon, and Julius’ son-in-law, Sam Perkul, composed the second generation of Davis Bakery & Deli, each of them with 35 to 40 years working in the family business.

Davis, 60, claims to not have been an all-star athlete at Cleveland Heights High School, but he was a member of the football team, swim team and band.

"I never was fat. I wasn’t bald in high school, either," said Davis, a trim man who sports a grey mustache and wears glasses. "It wasn’t until college that I started losing my hair. I had a full head of brown hair and let it grow long. We did that '70s thing."

Heights High was also where he met Cindi Caswell, his high school sweetheart, whom he married in 1974.

“We met in 11th-grade English class,” Davis said. “I think one day after class I hung around and waited for her, and we started talking and then I asked her out.”

Davis graduated from Heights High in 1971. He spent his freshman year of college at The Ohio State University before he transferred to Kent State University, where Cindi was enrolled in the nursing program.

Davis majored in finance and business management and minored in accounting. He worked as an accounting proctor; he chuckled when he recalled making $11 a week for spending money.

Scuba and life under the sea

The summer between Davis’ sophomore and junior year of college, he and cousin Alan Rivin took Scuba classes at the YMCA in Cleveland Heights.

"We were always swimmers," Davis said about the summers he and his cousins spent in the water. "We just started talking about it and said, why not try it?"

Their first dive was at Nelson’s Ledges Quarry Park in Portage County. The purpose? To receive their certification.

During their spring break the next year, the pair went to the Bahamas.

“It was March, 18 1973. Our average depth was 55 feet and that dive was 50 minutes, and it was clear, sunny and windy,” said Davis, reading from his dive book. “We were surveying coral reefs," he said, noting he had written about "plant life numerous and very colorful, fish life numerous and beautiful. I said I wish I could set up an aquarium with these fish.”

Since then, Davis has logged 36 dives in his dive book, describing the place, its weather and what he saw during the dive. He has traveled to the Bahamas, St. Lucia and Hawaii multiple times for dives, as well as to Cancun and Riviera Maya in Mexico and Punta Cana in the Dominican Republic.

The adventurous Davis has also done night dives and deep-sea dives more than 100 feet below the surface. His craziest dive was a shark dive he did eight years ago in Nassau in the Bahamas.

“It was such a surreal experience,” he said. “The sharks looked so mechanical, almost unreal.”

Back to the bakery

In 1975, Davis became the first in his family to graduate from Kent State. He found a job working at J.B. Robinson Jewelers as an assistant to the controller. Store owner Larry Robinson introduced Davis to morning workouts at the JCC.

“When your boss asks you to run with him at 5:30 in the morning, you don’t exactly say no,” Davis said.

After a year and a half at J.B. Robinson, Davis discovered that working at the family Bakery was his “true love.”

Stu serves as head of production and his younger brother, Jay, has taken control of the store. Both graduated from The Ohio State University and had other jobs before returning to the bakery. Beth, who lives in Houston with her husband, is an OB/GYN physician at the Texas Children's Pavilion for Women Obstetrics and Gynecology.

Davis, who is a member of Temple Emanu El in Orange, said all of his kids had their bar and bat mitzvahs at the synagogue, where Davis' grandparents were charter members.

Davis has always kept up with his 6 a.m. workout routine despite often working seven days and 70 hours per week.

“I’ve always been an early morning person because I’ve found that if I didn’t get to the gym early in the morning, once I left and entered the bakery, I would never make it,” he said.

Seven years ago, Davis was enrolled in an early-morning BOSU class when the instructor sustained a non-BOSU-related injury.

Davis said Kim Gottlieb, the JCC’s group fitness and Pilates manager, told him that if he wanted to continue teaching the class, he would have to be certified. Davis enrolled in a class to get certified the weekend before Rosh Hashanah, one of the busiest times of year for the bakery.

“I figured I probably wouldn’t make it to the class anyways because we were going to be so crazy at the bakery, so I didn’t tell anyone I signed up,” he said. “Anyways, I was able to sneak away from the bakery, and I went to the class, and ended up getting certified as a group fitness instructor. I continued teaching, but now I was on the payroll.”

While Davis substitute teaches for step, boot camp and aerobic interval classes, his main focus continues to be his BOSU class.

“It’s a neat little group we have. It's close-knit. We’ve developed a camaraderie,” Davis said. “If you don’t show up, you might get a call or text saying, 'Where were you this morning? We missed you.' ”

Davis said the group has grown so close its members get together outside of class three to four times per year to catch up on each other’s personal lives.

“We party outside of here,” said Don Burck, who has been taking Davis’ class since he started teaching it. “We meet at people’s homes and have drinks, appetizers, dinner and desserts. We really have a nice time and enjoy each other’s company.”

Burck, an Orange resident, said that as the leader of the group, Davis has an all-inclusive mentality.

“He’s pushing us while having empathy,” he said. “It’s not just that he’s working out and we’re here. It’s really that we work out together. He’s the instructor, but he’s able to make you feel like we’re all in this together.”

Gottlieb, the group fitness manager at the JCC, knew of Davis’ passion for exercise since he was her student. She said Davis’ class communicated an unusual sense of community, as he connects with his students, ranging from college age to those in their 70s.

“The biggest challenge for any instructor is that you want people to feel good about what they do,” said Gottlieb, a Solon resident. “You have to give people alternate ways to accomplish fitness goals. At some facilities everyone is at the same level; here it’s not. Joel does that, and he connects with people. I’m sure he knows everyone’s name in that class.”

Fitness in the bakery

As head of “quality control” for the bakery’s goods, Davis says he works out daily and plays tennis once a week.

“Don’t a lot of people say that’s why they work out, so that they they can eat?” he joked. “I have to sample and eat the different things. I’d be 500 pounds if I didn’t work out.”

Davis’ son, Stuart, who joined the bakery as head of production in 2006, said bakers have to be fit, especially at Davis Bakery when Rosh Hashanah calls for 5,000 pounds of challah to be made.

“You’re constantly moving. You’re on your feet, especially in my role where you’re producing a lot,” said Stu, who attends weekly spinning classes at the JCC with his dad. “It starts with lifting heavy boxes because we’re making big-size doughs. The lightest stuff we’re carrying around is 50 pounds.”

Both of Davis’ sons have adopted both his passion for fitness and for the family business.

“I feel that it’s a really unique situation to be able to work alongside my dad and brother,” Jay said. “You go through adversity together and experience success together.”

Stu and Jay, and Jay’s Israeli wife, Yael, make up the third generation of Davis Bakery & Deli as they plan to carry on its legacy. Matt Martin, 22, Davis’ great-nephew, comprises the bakery’s fourth generation, working in customer service and production.

Davis said he still performs the administrative and financial duties his Uncle Julius taught him.

“You never saw a family that was as close as my dad and his brothers,” Davis said. “Whenever they made major decisions, it was always unanimous. They were all in accord or they wouldn’t do it.

“I think what made them so unique was that there was no jealousy between them. They never had the big houses, they never had the fancy stuff, and they are really down to earth people. The second generation was the same. Let’s see what happens with these young guys.”