Jamie Reigle stands next to the display case of his most valuable and oldest Superman collectibles. 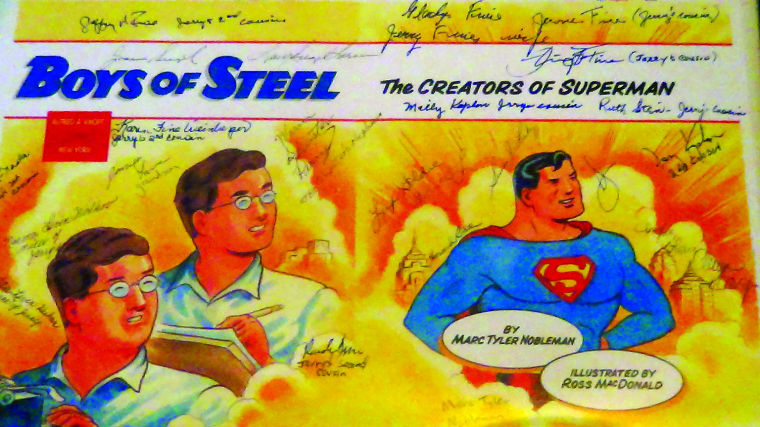 The “Boys of Steel: The Creators of Superman,” original proof page signed by members of both the Siegel and Shuster families. 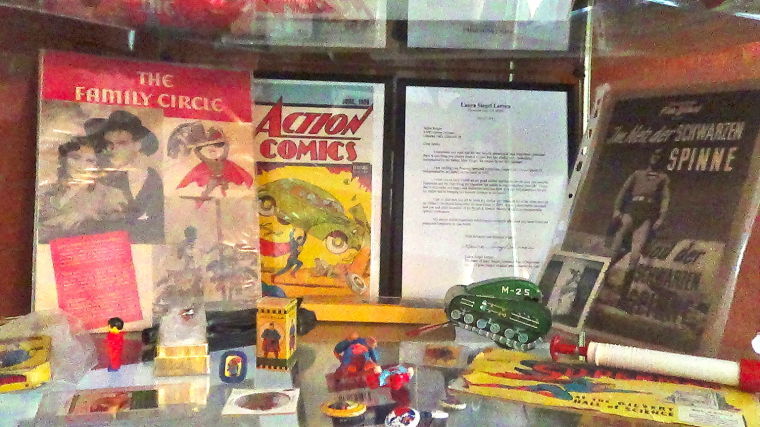 Among Jamie Reigle’s collectibles is a reproduction of Action Comics No. 1 signed by Superman co-creator Jerry Siegel. 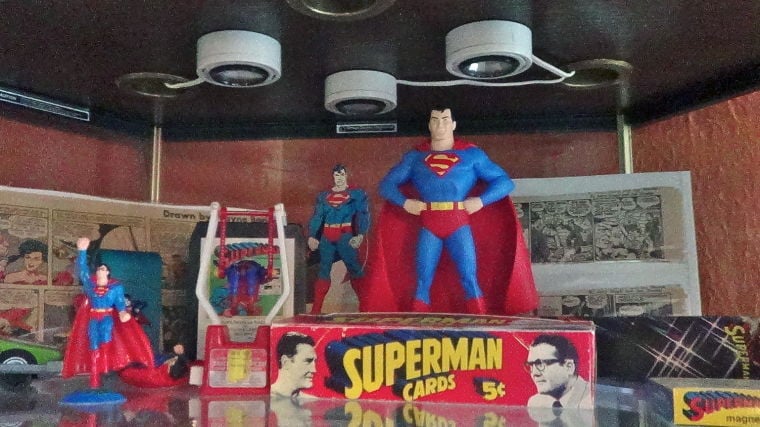 Jamie Reigle’s collection consists of old newspaper strips and Superman comics from countries all over the world, written in different languages. 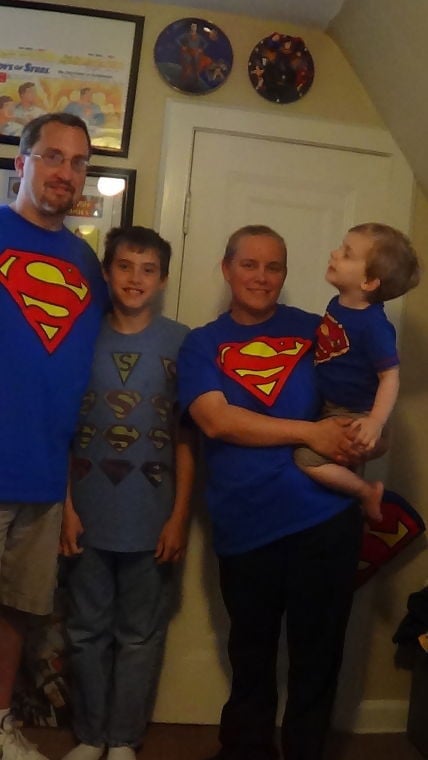 Jamie Reigle stands next to the display case of his most valuable and oldest Superman collectibles.

The “Boys of Steel: The Creators of Superman,” original proof page signed by members of both the Siegel and Shuster families.

Among Jamie Reigle’s collectibles is a reproduction of Action Comics No. 1 signed by Superman co-creator Jerry Siegel.

Jamie Reigle’s collection consists of old newspaper strips and Superman comics from countries all over the world, written in different languages.

A Chevrolet SUV with the license plate Kalel-1 sits in Jaime Reigle’s driveway, fresh off a 12-hour trip from Metropolis, Ill.

Reigle, 39, spent four days in the “Hometown of Superman” selling some of his 40,000 items of Superman memorabilia, comics and collectibles at the city’s 35th Superman Celebration.

“For 10 years, I set up in the streets there (Metropolis) with 150 feet of tables,” said Reigle, owner of www.supercollectibles.com. “This year, the opportunity came up for me and a couple of artists and comic book dealers to do a Super mini-con in a 2,500-square-foot building there. Half of it was Superman memorabilia.”

Reigle’s Cleveland-area home serves as a shrine for his Superman collection. Above his couch hangs a $5,000 frame with the first Superman issue signed by Jerry Siegel, one of the last things Superman’s co-creator signed before he died in 1992. In his dining room stands a 6-foot-tall glass case displaying his most prized Superman memorabilia, which he calls his “holy grails.”

“A lot of that stuff in there, you wouldn’t see another one in the world,” Reigle said. “The old stuff is really what people want and what’s going to hold its value.”

1940s-era Superman figurines, comics in different languages and newspaper clippings are among his prized collectibles. He also owns a hand-painted Superman animation cel (a celluloid sheet) used in a sequence for a Superman flying scene. A 1940s Macy’s game box with a Superman promotional sticker is on the top shelf. Reigle bought it for a bargain.

Above his fireplace, Superman picture frames fill the mantel showing his kids, Kalel, 11, and Lex, 2. Kalel is named after Superman’s birth name, Kal-El, Lex after Superman’s archenemy, Lex Luthor. Reigle told his wife when they started dating that he wanted his kids named after the comic’s characters.

“They were different, so I went with it,” said Reigle’s wife, Dawn, who attended a Superman convention just two days before she delivered her first-born.

Among the most expensive items in Reigle’s collection is a 1939 Brazilian magazine promoting the Superman comic book overseas, priced at $7,499.95 on his website. The most unusual are Superman condoms from Japan. Reigle also has a tattoo of the Superman “S” on his left calf.

Reigle said the piece most valuable to him is Siegel’s bedroom window, which he salvaged when the Siegel and Shuster Society restored Siegel’s former home in Glenville in 2009.

“If you listen to any of his old interviews, he would say stuff about sitting at his typewriter and staring out his window,” he said. “I figured that’s the window he looked out and dreamed up Superman.”

In his office, boxes of Superman collectibles abound, from Pringle’s cans with Superman’s “S” logo to Superman pillows Reigle purchased from a dealer in Australia. On the wall closest to his desk, the original proof sheet from Mark Tyler Nobleman’s book “Boys of Steel: The Creators of Superman” hangs, signed by various members of the Siegel and Shuster families.

“I tracked down every living member of Jerry and Joe’s family, and they each signed it and put how they were related,” he said. “It took me two years. I have second and third cousins on here. Joanne (Siegel) signed it. The grandkids are on here, too. There’s a lot of Jewish names there. I got a lot of good stories out of them.”

“I’d go out of my way for anything Siegel and Shuster,” he said. “I’ve sat down with their families and gone through their baby pictures and Joe’s original artwork. I’ve seen all kinds of personal stuff the families have never shown. I feel a lot closer to the families even though I never got to meet them (Siegel and Shuster).”

Riegle started collecting Superman comics when he was 4 years old, when comics had “no value.”

“We’d go in every weekend and hit the quarter boxes,” Reigle said. “I had a list of all the Superman and Batman issues I wanted and would go through box after box.”

Although he didn’t view himself as a collector when he was younger, Reigle said he kept all of his collectibles in their original packaging and put everything away as his collection grew. His interest in the “Man of Steel” continued when “Superman: The Movie” starring Christopher Reeve hit theaters in 1978.

“Superpowers hit in the ’80s and that’s when it really took off,” he said. “I was collecting and going to flea markets and all types of shows on the weekends.”

Although Reigle liked other superheroes when he was younger, he fixed on Superman because “the others didn’t have a choice.”

“When you’re sitting playing superheroes, Superman is always going to win,” he said. “You know one got bit by a spider, one walked into a nuclear reactor and the others had powers and stuff like that. Superman was the most human one.”

“Superman is one I care about a lot because he is the first,” said Sangiacomo, who lives in South Amherst. “Others try to get the job done, but Superman does things the right way, even at expense to himself. He is the superhero ideal.”

Sangiacomo, who said he learned to read through Superman comic books, has known Reigle for 10 years through covering different Siegel and Shuster society events.

“I’ve only seen part of his collection, and it’s pretty impressive,” said Sangiacomo. “I agree that it’s one of the biggest in the world.”

“I think scarcity (of items is what sets it apart,” Presser said of Reigle’s collection “He has a lot of key collectibles. He’s got some Top 10ers. His advanced collection of Superman is world renowned, and lots of people know he’s the go-to guy and is knowledgeable.”

A founding member of the Siegel and Shuster society, Reigle said he is proud that Cleveland has “gotten a lot more awareness out” about Superman’s connection to the city.

“You have everyone wearing Superman shirts now,” he said. “I’m glad to see that everyone’s on board and recognizing that he was created here.”