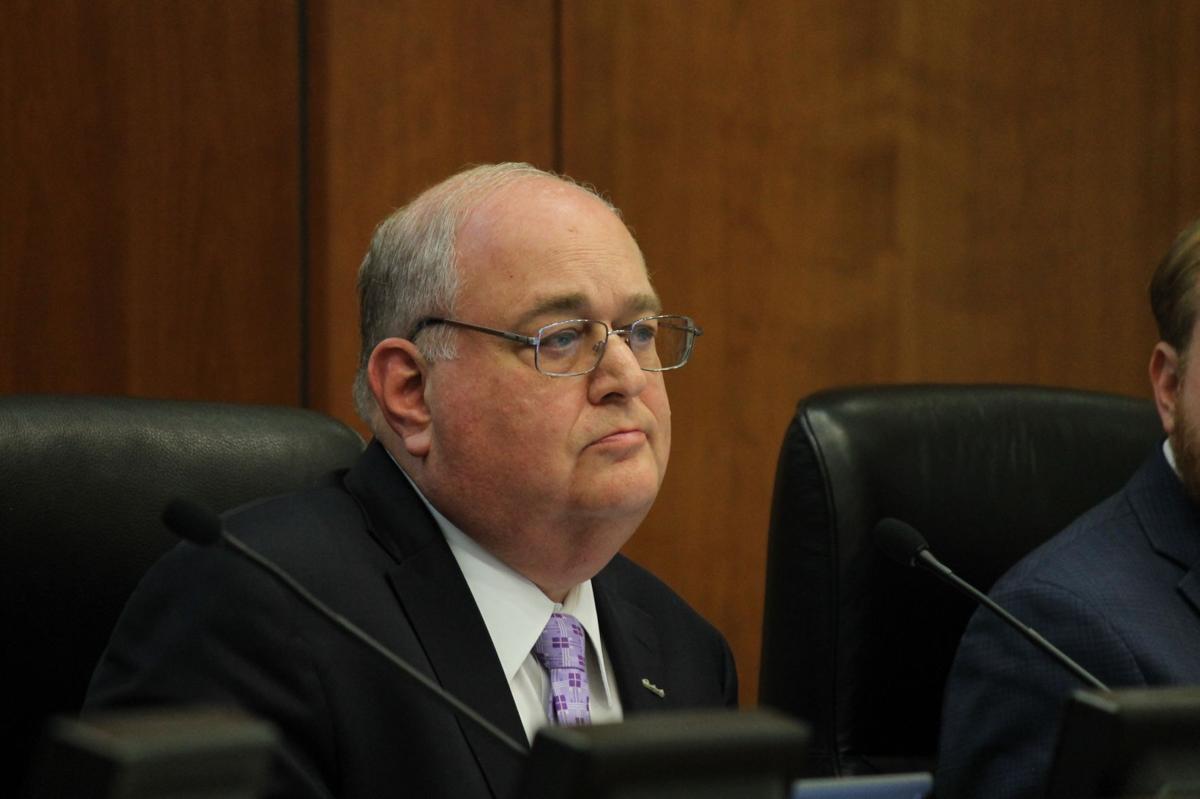 Martin S. Horwitz listens Oct. 30 to an executive summary of an investigation into allegations about him. 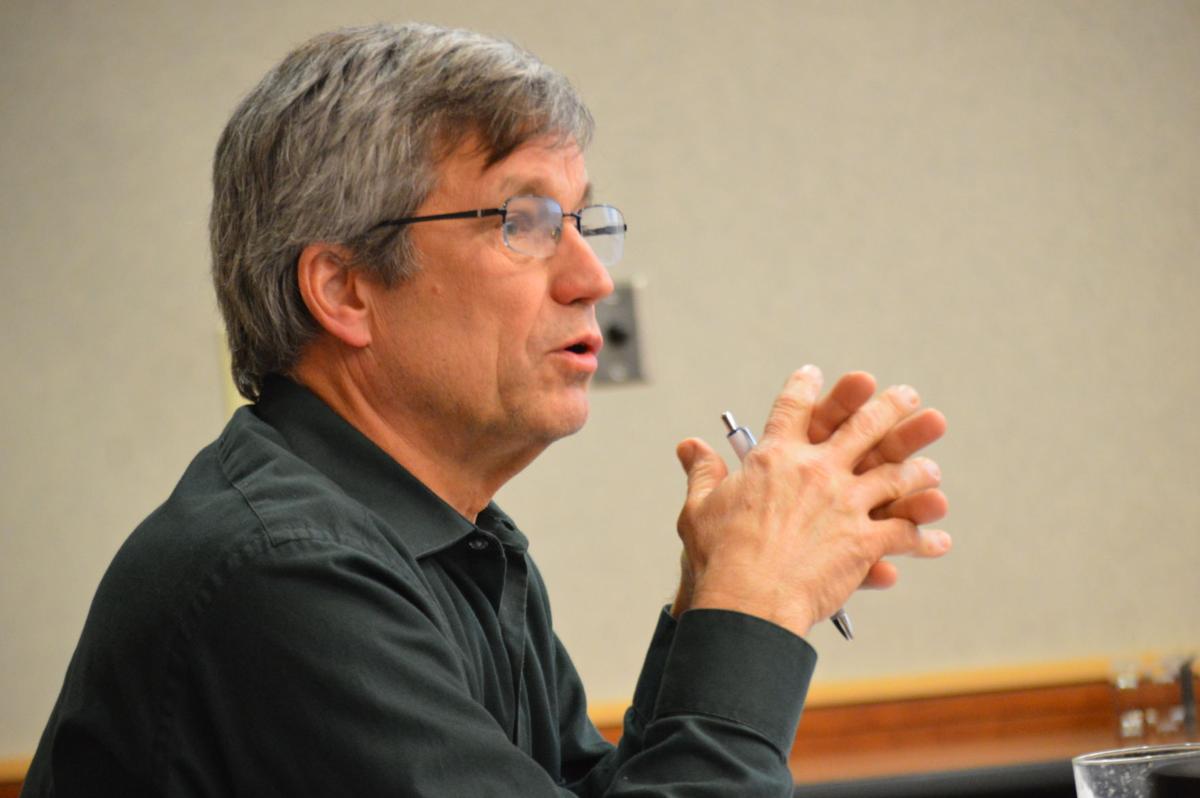 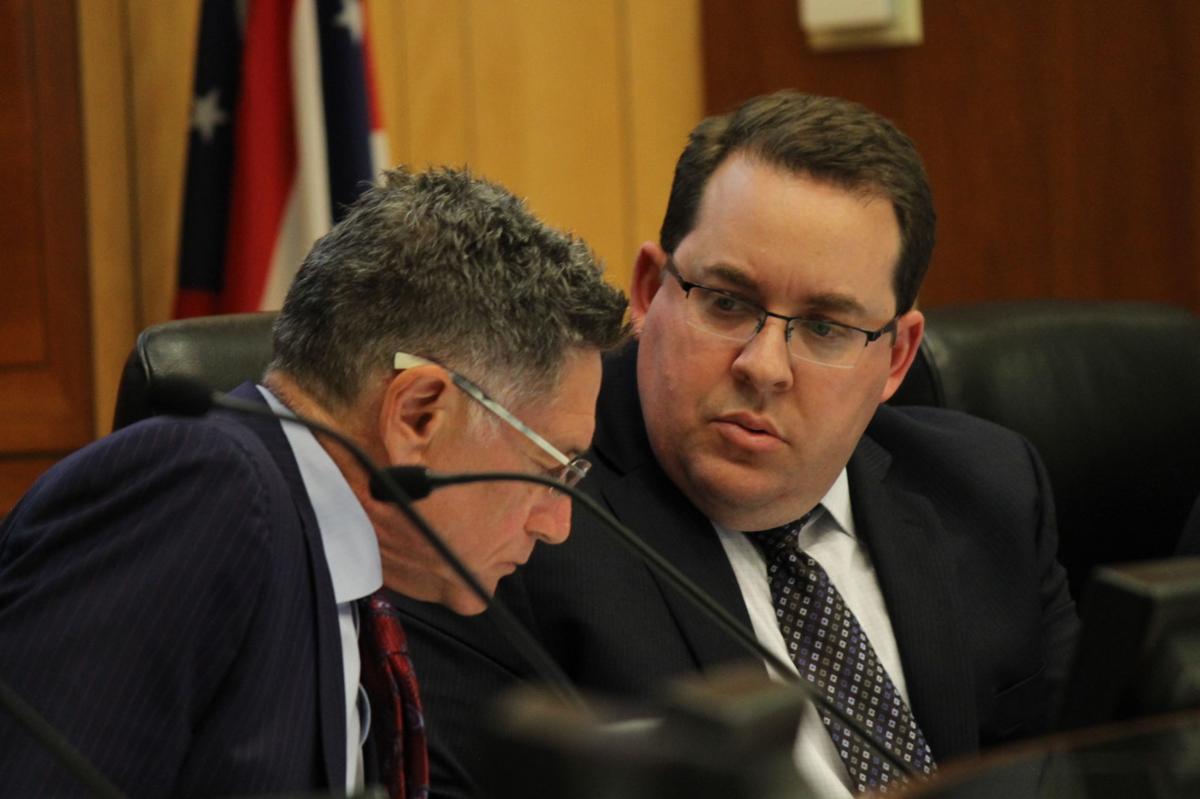 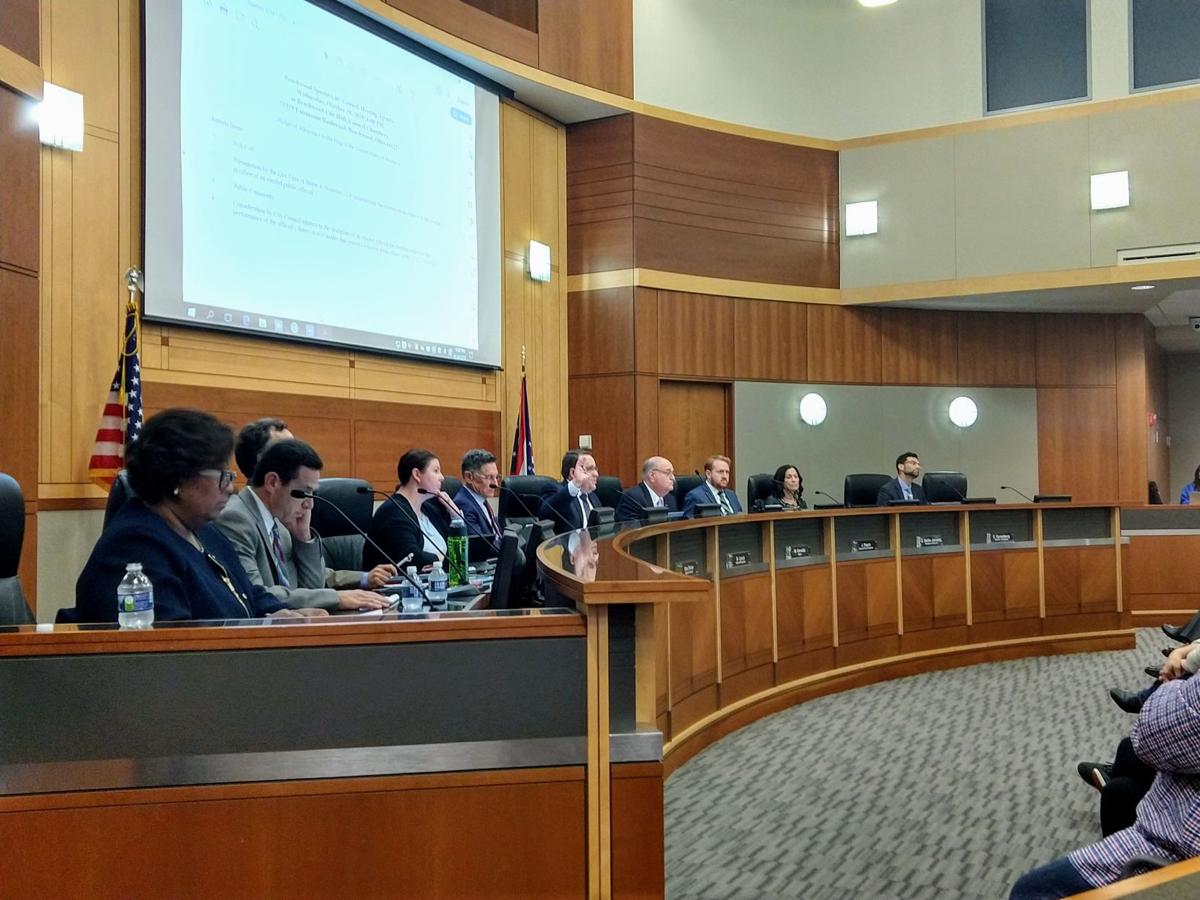 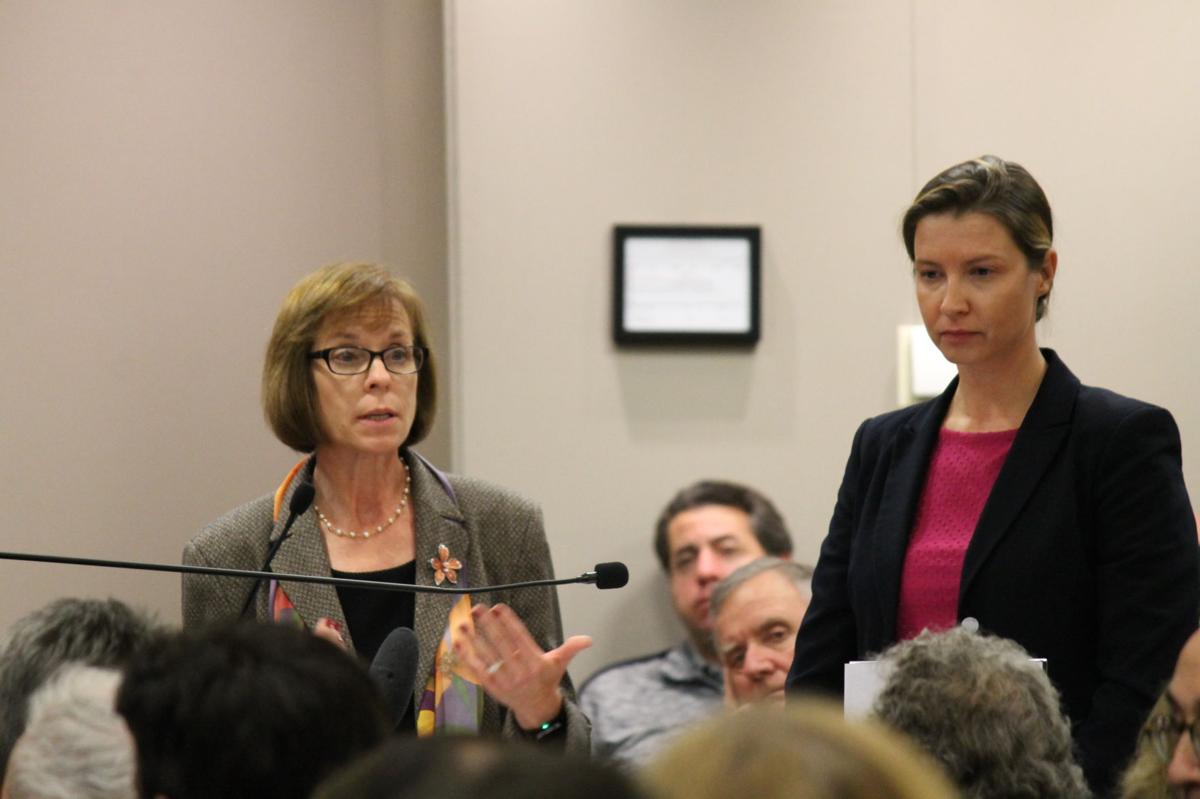 Carole S. Rendon, left, and Carrie A. Valdez of BakerHostetler LLP deliver an executive summary of an investigation about Mayor Martin S. Horwitz to Beachwood City Council on Oct. 30.

After Beachwood Mayor Martin S. Horwitz placed his executive secretary on administrative leave, city council, fearing potential litigation, approved a confidential settlement for just under $24,000 more than she was owed.

Council president Brian Linick recently confirmed that a comment the mayor made to Deborah L. Noble was a point of legal concern, but he would not specify the content of the remark. Linick confirmed council believed Noble would sue.

Horwitz became mayor on Jan. 1, 2018, and said he wanted to restructure the mayor’s office to save money.

The settlement came to light after city council authorized an expenditure of up to $30,000 for a special investigation into comments Horwitz made to other employees. Several of those comments were documented in a special report by attorney Carole S. Rendon of BakerHostetler LLP of Cleveland.

Transcript of report on allegations against Beachwood mayor

At the Oct. 30 special council meeting where Rendon delivered the report, she was asked if she was aware of any prior settlements with a city employee “that related to conduct similar to what’s described here.”

Rendon would not elaborate when asked by the Cleveland Jewish News on Dec. 3.

However, city council members said recently that Rendon’s reference could only have been to Noble.

Horwitz issued a public apology at the special council meeting and has taken steps to avoid similar interactions.

Noble’s lawyer, Mark Wachter of Wachter Kurant LLC in Pepper Pike, told the CJN that neither his client nor he threatened to file a lawsuit. He said Noble would not comment on whether Horwitz made an inappropriate remark to her.

“She is not interested in speaking to anybody or giving a statement,” said Wachter, who was a 16-year Beachwood councilman.

Multiple attempts to reach Noble by telephone and in person were unsuccessful.

Hope L. Jones, who was Beachwood’s law director and handled negotiations for the city, said in an email to the CJN there was no threat of a lawsuit.

Noble was a 20-year city employee with positive evaluations when she was offered a severance package six weeks after Horwitz took office.

“As a 20-year employee of the city of Beachwood, I wanted her (Noble) to be treated fairly,” Horwitz said.

In a Friday, Feb. 9, 2018, memorandum, he directed Noble to turn in her keys at the end of the day. He offered her 10 weeks paid administrative leave in a severance package, starting the following Monday and running through April 27, 2018, according to a document received in multiple public records requests by the CJN.

“She took the deal and there was nothing there,” Heiser said. “And so, she may have made an innuendo about something that might not have been true, and she got what she wanted out of it.”

Horwitz said in a Dec. 4 statement to the CJN that his restructuring of the mayor’s office would save the city $175,000 annually. As part of the restructuring, Horwitz hired a full-time communications coordinator in lieu of contractual assignments.

“It had always been my plan to reorganize the duties and responsibilities of personnel in the mayor’s office,” Horwitz wrote in an additional Dec. 9 statement to the CJN.

A second page of the Feb. 9, 2018, memorandum titled “Severance Package” stated that a request for unemployment benefits would not be challenged.

“City can style the separation as a layoff due to lack of work in order for Debbie to be eligible for unemployment benefits,” the second page stated.

Ohio is an at-will state, meaning employers and employees can separate for any reason or no reason.

The page also directed Noble to contact the human resources director or law director by Feb. 14, 2018, for “a severance package with a release agreement.”

The city finance director said Noble’s choice of attorney had an impact on negotiations.

“As soon as it was realized who her attorney was, it’s kind of like she’s going to get more money out of us,” Heiser told the CJN on Dec. 12.

City council authorized the “Separation Agreement and Release” between the city and Noble in a 6-0 vote on April 16, 2018, extending the paid administrative leave to Aug. 12, 2018, excluding her $100 monthly cell phone allowance. It also included a mutual non-disparagement clause.

City council first discussed the matter in executive session at least once and then voted on it, council members told the CJN.

“From what I understand, when Mayor Horwitz became mayor, he realized there were ways he could run a leaner and more efficient mayor’s office,” Councilman Eric Synenberg said. “It’s my understanding that one of those ways was to eliminate Debbie Noble’s position.”

“I’m just not a fan of long, drawn-out litigation, which I felt this had the potential to become,” he said. “The litigation could have cost a lot more.”

Other council members declined to offer detail about their vote supporting the settlement.

“Before Marty was elected, there was talk of too many people in the administration,” said councilwoman Barbara Bellin Janovitz, adding that Horwitz was “just streamlining all of the city hall positions.”

“I thought that was the best for the city of Beachwood,” he said.

“The Noble item is subject to a settlement agreement,” councilman Alec Isaacson, who was not present for the council vote, wrote in an email to the CJN. He declined to comment further, deferring to James Pasch, vice president of council.

“I can’t comment beyond what’s in the settlement agreement,” Pasch said.

June Taylor was appointed to city council on Jan. 25, 2018, to fill Horwitz’s unexpired term after he became mayor.

“Unfortunately, when I came on, that had already concluded,” Taylor said. “And that … I believe is a closed settlement amount so unfortunately I don’t know anything else.”

The investigation into Horwitz’s comments is placing additional costs on the city.

“The law department had to remove themselves, recuse themselves, and that’s why I was hired as special counsel,” Fisher told the CJN. “I was brought in after the fact to determine what’s next. Can council continue to meet behind closed doors? And my answer was no.”

Fisher submitted a $5,000 invoice for 20 hours of work at $250 an hour. The invoice contains black redactions throughout the entire detail of each entry under “description.” Both he and Linick cited attorney-client privilege as the reason for redactions. 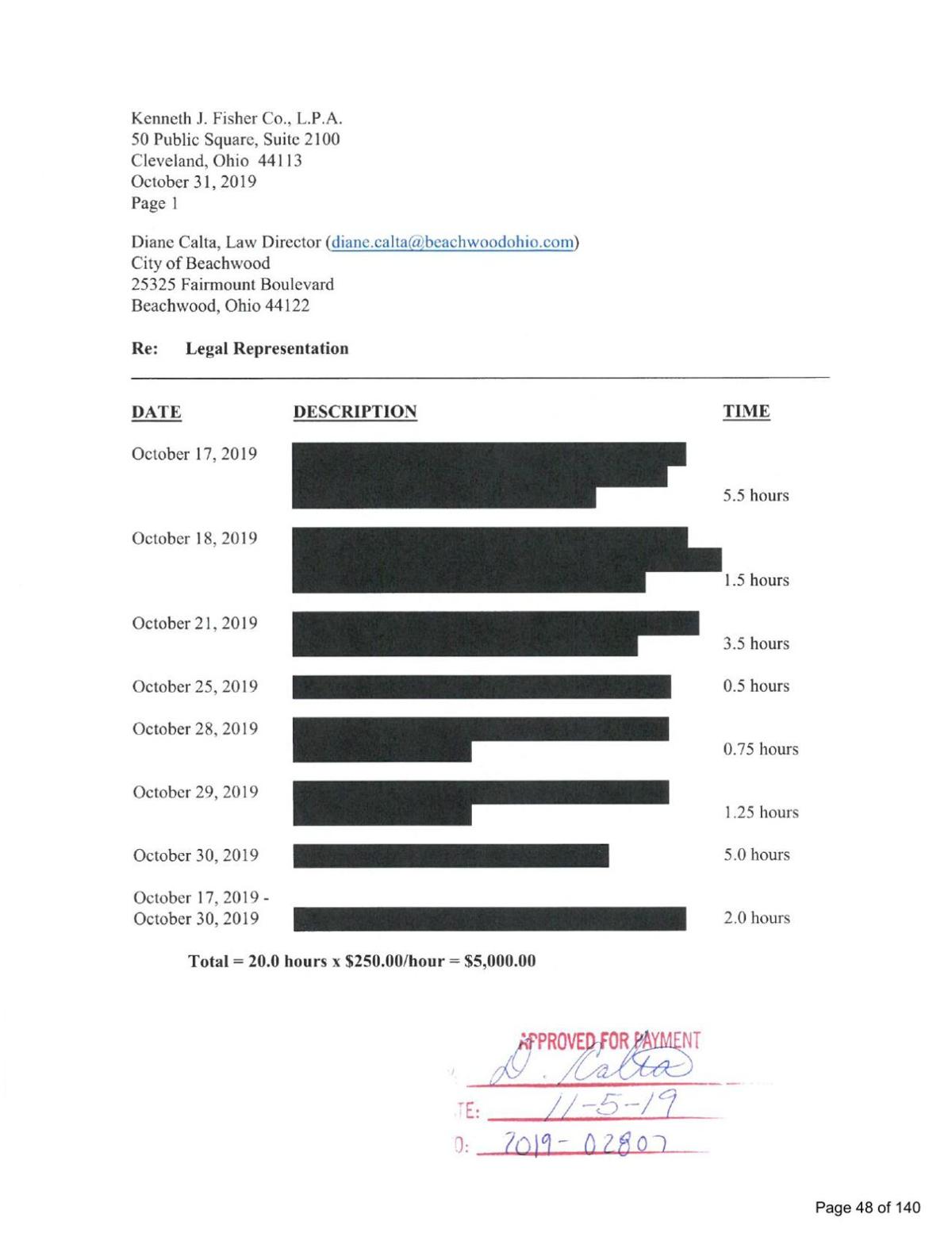 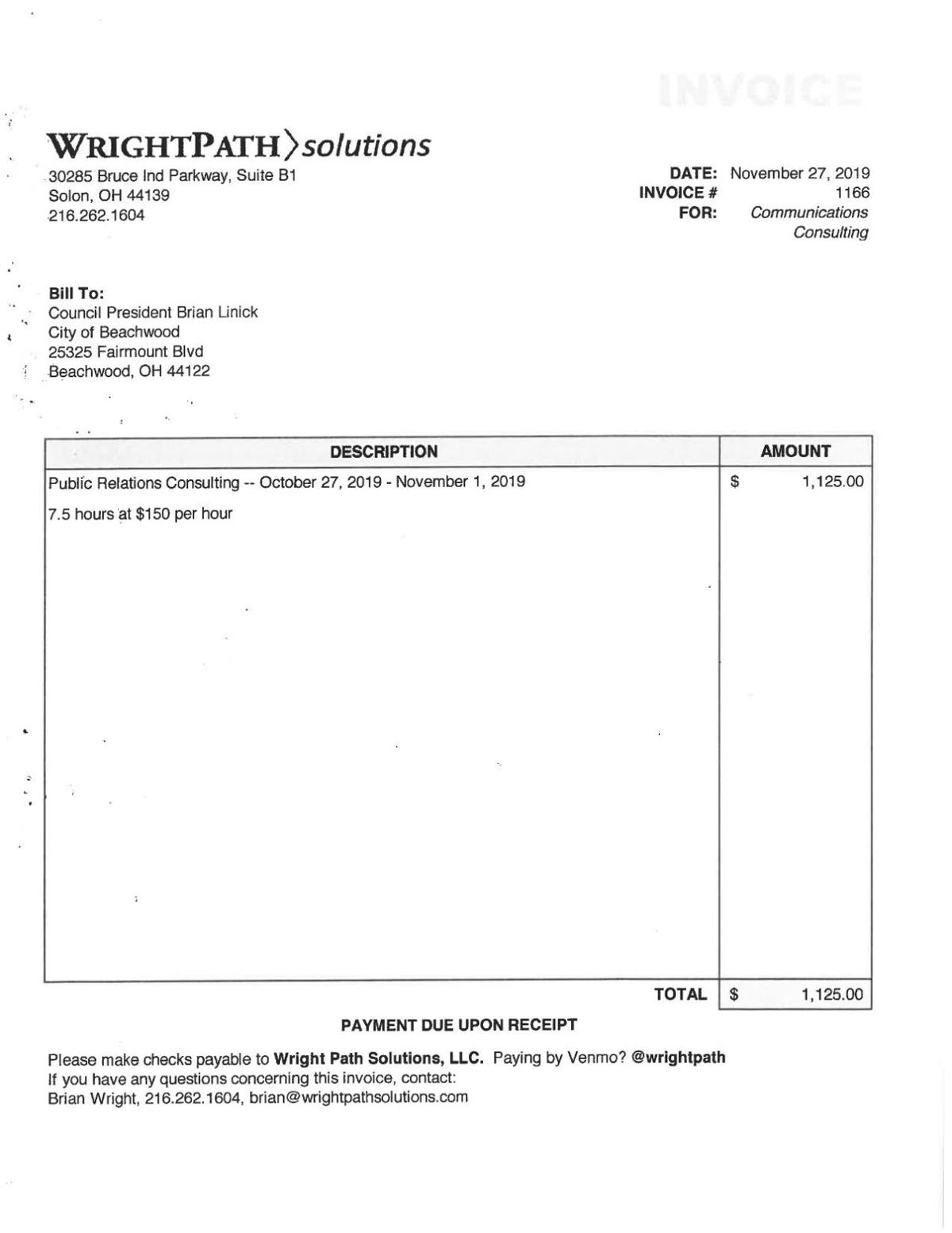 At a Nov. 25 finance and insurance committee meeting, Linick recommended setting aside funds to pay for potential future claims regarding allegations involving the mayor.

“I think we need to be doing something to quantify potential exposure and what that risk might be, if that’s $500,000 or a million, or whatever it may be,” he said. “We cannot ignore the (Oct. 30 Rendon) report that we received and the implications that has from a liability standpoint.”

The city carries liability insurance, according to Heiser.

“There are times when there are settlements that aren’t covered by insurance,” Linick said.

In a Nov. 21 interview with the CJN, Horwitz said he completed a two-hour training with Impact Solutions of Beachwood, which was paid by the city as part of its contract for providing employee assistance program services.

Horwitz told the CJN he has since issued individual apologies as he promised he would in his Oct. 30 public apology.

He said the Rendon investigation and this CJN story were motivated by Linick.

“That’s absurd,” said Linick, who lost his re-election bid and will leave council Dec. 31. “All these things are not motivated by anything, but they are necessitated due to his (Horwitz’s) inappropriate actions.”