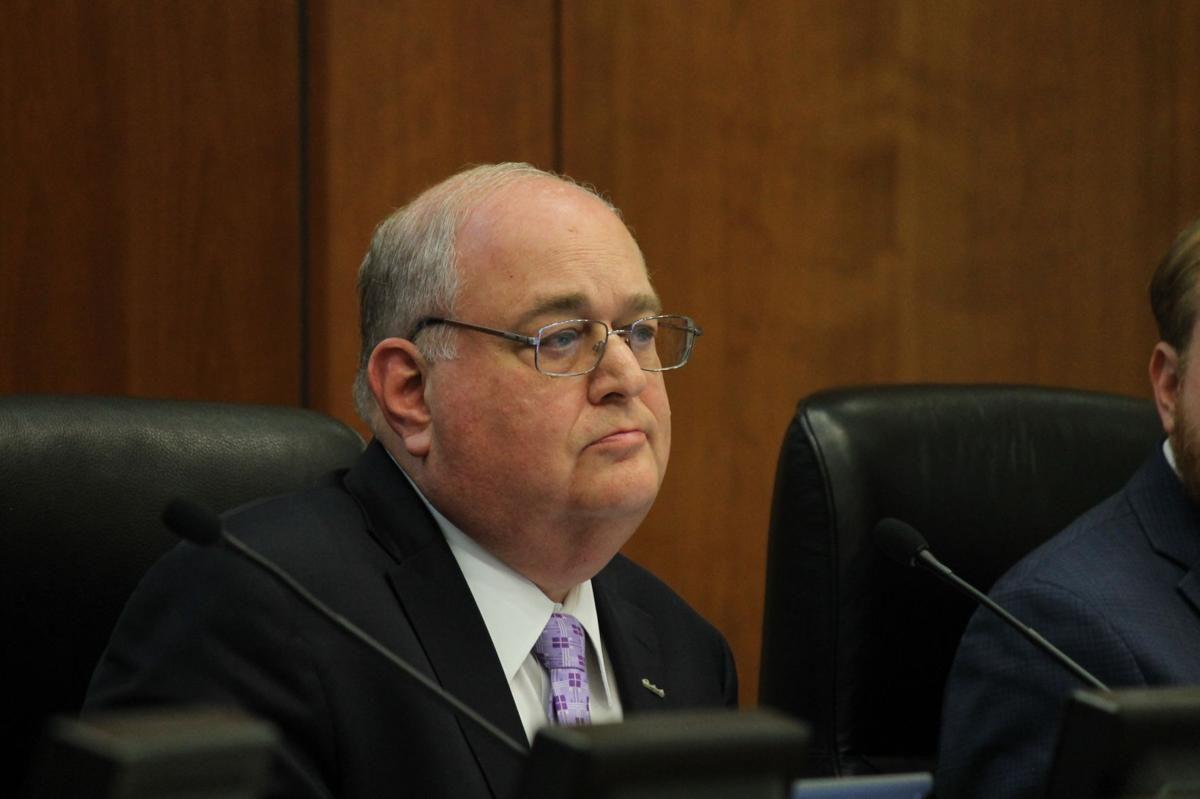 Beachwood Mayor Martin S. Horwitz listens to an executive summary of an investigation into allegations about him at an Oct. 30, 2019, special city council meeting. 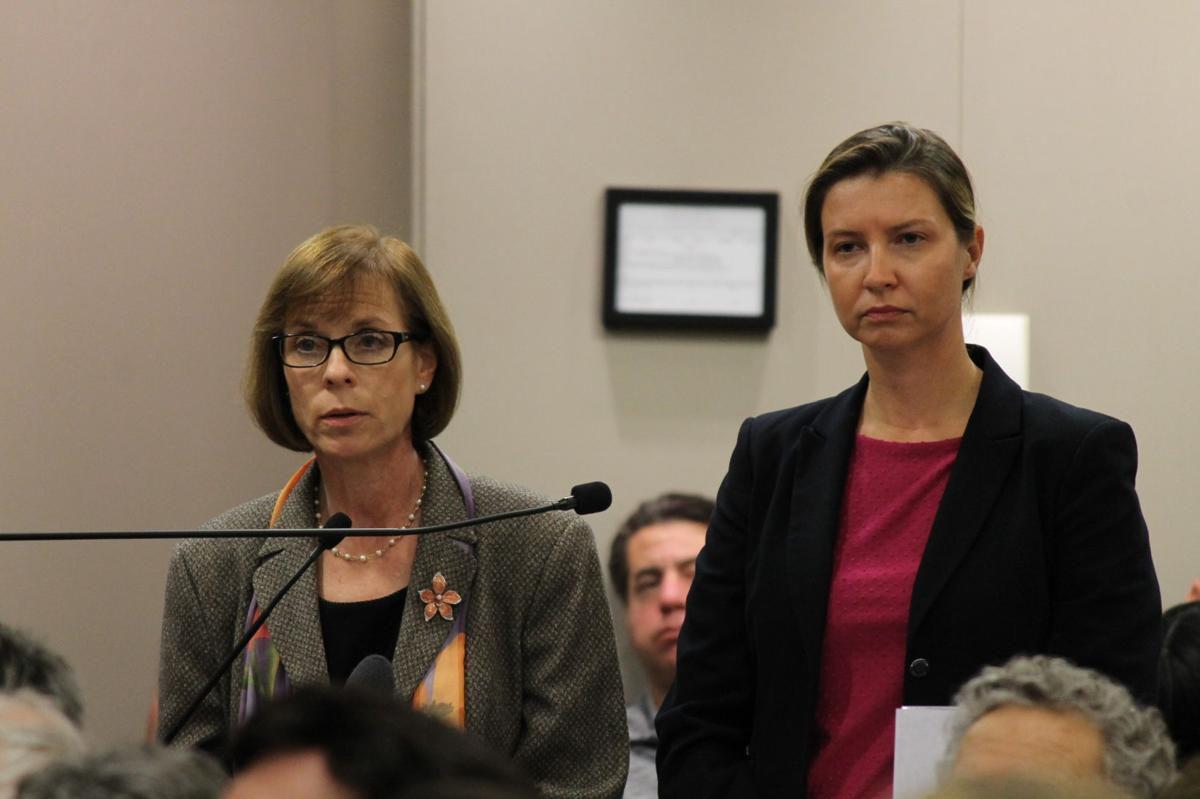 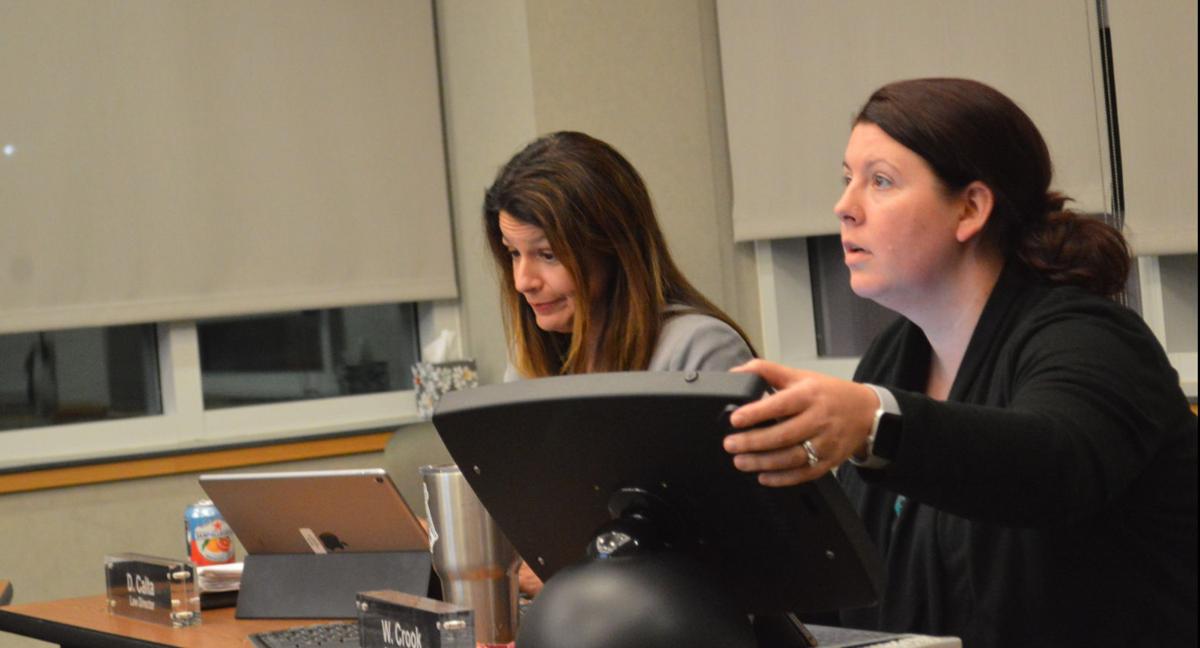 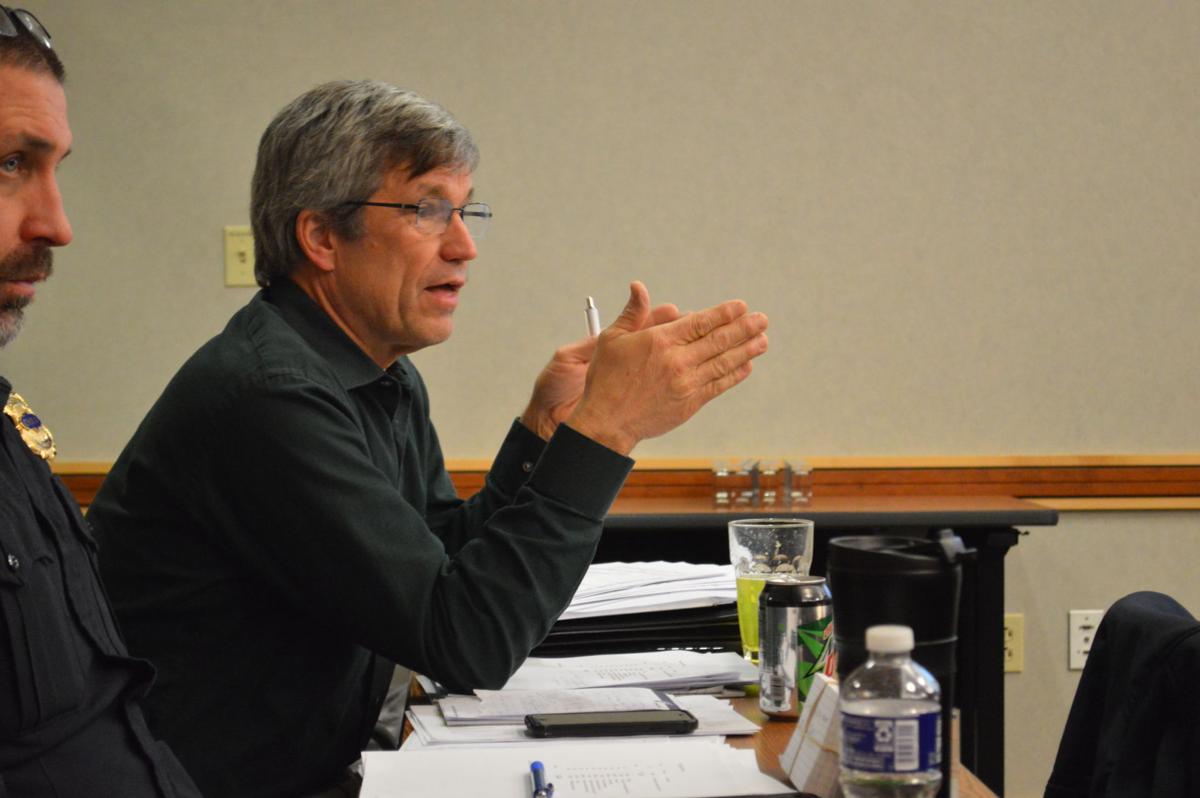 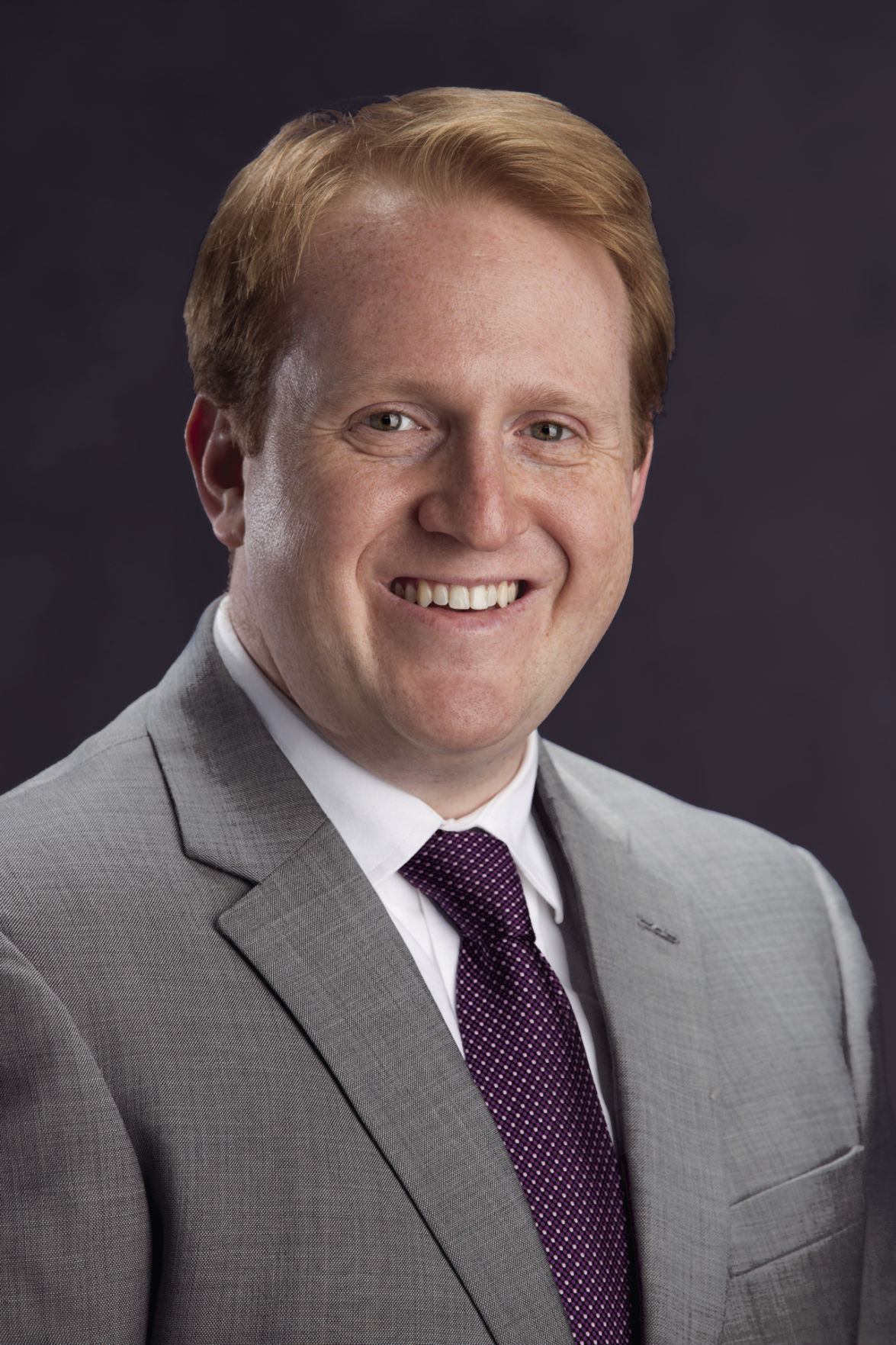 The city of Beachwood has settled an employment claim based on the mayor’s conduct for the second time since Martin S. Horwitz took office, this time for $16,000, the CJN has learned.

Rather than involve Beachwood City Council in a response as in the last case, lawyers for the city’s insurance group negotiated a settlement and informed Horwitz of the settlement afterward.

One council member, Mike Burkons, has challenged both the mayor and the city law director regarding the handling of the settlement, raising questions about conflicts of interest on the part of both Horwitz and Diane Calta, city law director.

Whitney Crook, clerk of council and a legal assistant, sought $25,000 and “a written assurance that no further conduct will occur” in a Feb. 7 demand letter from her attorney, Brian Green, of Shapero & Green LLC in Beachwood. On May 26, Crook signed a release agreement awarding her $16,000. The Feb. 7 demand letter specified three incidents taking place since the mayor took office in January 2018. 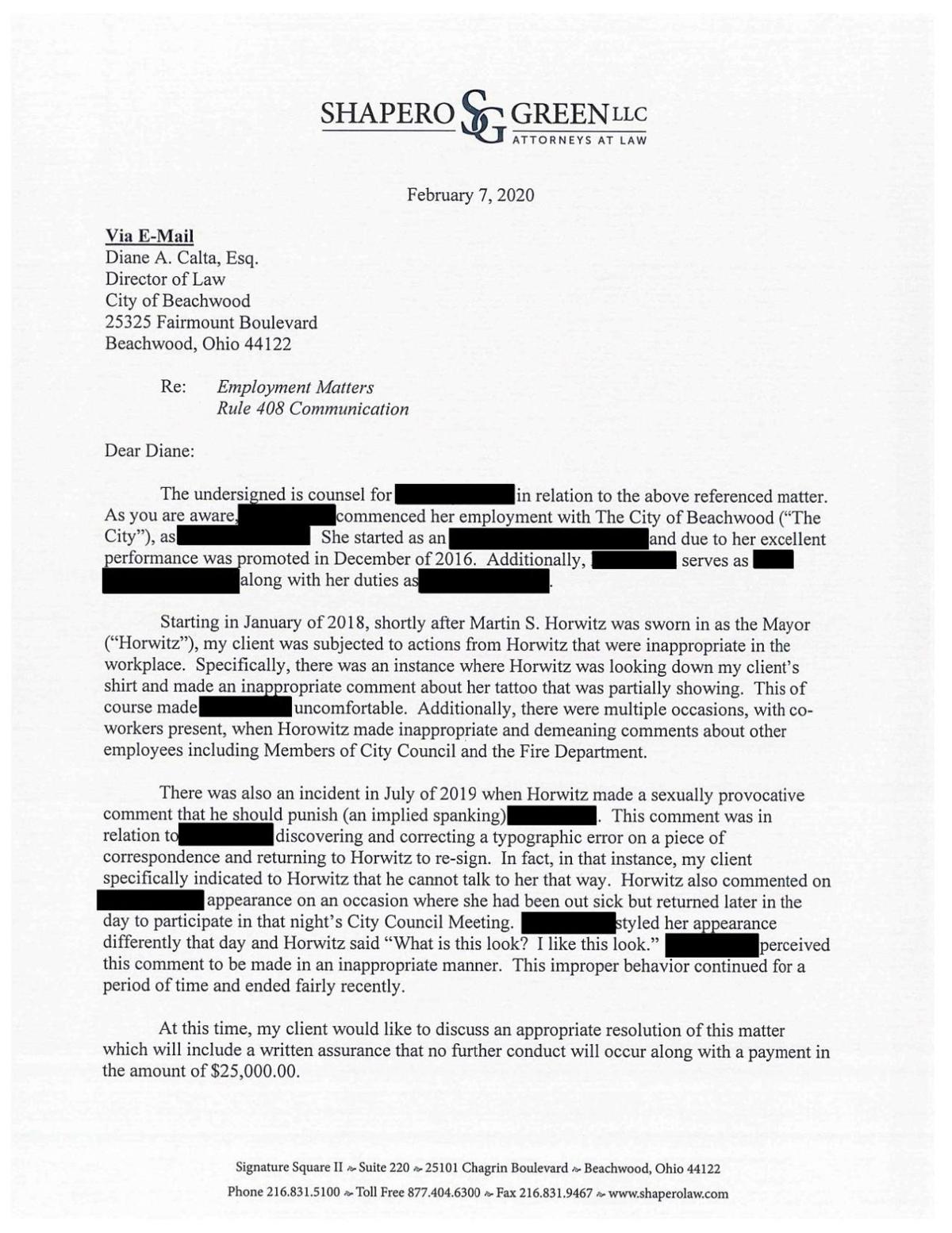 “No one on council was involved in either the demand or the settlement,” city council president James Pasch told the CJN. “I was aware that the insurance company settled the claim when they sent over a letter stating that the claim was resolved.”

The city’s finance director, Larry Heiser, told the CJN he was purposely left in the dark on the claim and the settlement.

Horwitz texted the CJN on July 8 while he was in the hospital recovering from surgery.

“I did not authorize the settlement,” he wrote. “The insurance company had the authority to settle on its own.”

To date, the city has paid $79,098.43 in settlements, attorney fees and other costs over allegations against Horwitz since he took office in January 2018. That figure does not include the $16,000 paid to Crook or the $5,386.65 in lawyers’ fees and expenses associated with that case; those costs were borne by the city’s insurance consortium. It does include the $2,500 deductible Beachwood paid to the insurance company to resolve the matter. 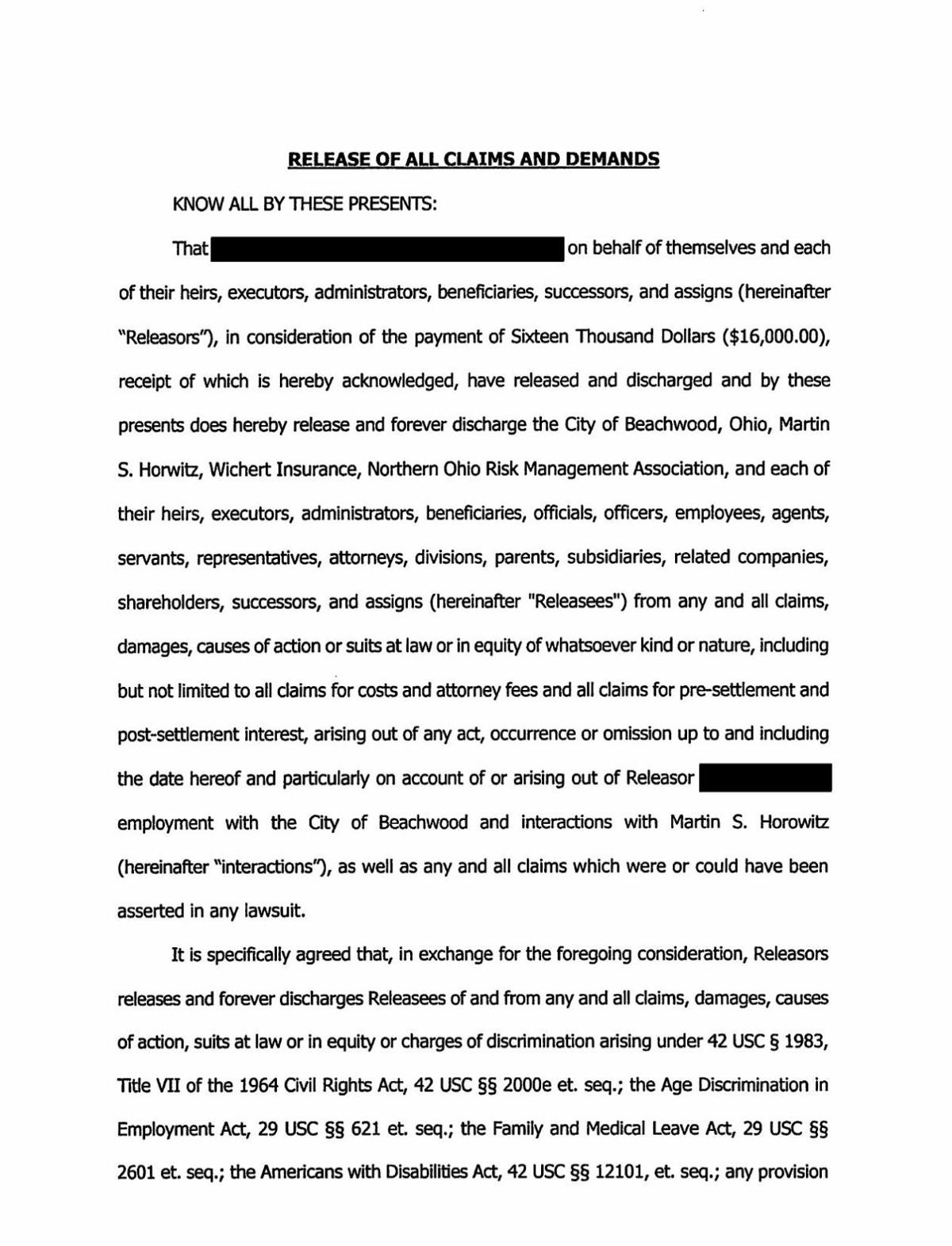 Horwitz provided a statement to the CJN on June 9 about Crook’s demand letter.

“The insurance company reviewed the allegations and the investigation that concluded Oct. 30, 2019,” he stated, referring to an earlier investigation into his conduct by special counsel Carole Rendon. “It is within the terms and authority of the insurance company to process this claim based on law and costs. They did so and notified the city in a letter dated May 28, 2020, that concluded there were no claims that rose to the level of harassment or hostile workplace, and it was more economical to settle the claim.”

Wichert Insurance handles claims for NORMA. Beachwood is a member of that self-insurance group.

In a May 29 letter to Calta, Richard Studenic, director of claims at Wichert Insurance of Cuyahoga Falls, said, “We opted to settle the claim.” The letter said the city’s $2,500 deductible would go toward legal fees in this case. Calta forwarded an email to council on June 1, but council had not yet been made aware of the terms and amount of this settlement.

“Studenic has advised me that the city was notified of the proposed settlement through its mayor, Martin Horwitz, who stands as the city’s chief administrative officer,” Calta wrote in a June 17 letter to the CJN.

Heiser: ‘They didn’t want me to know’ 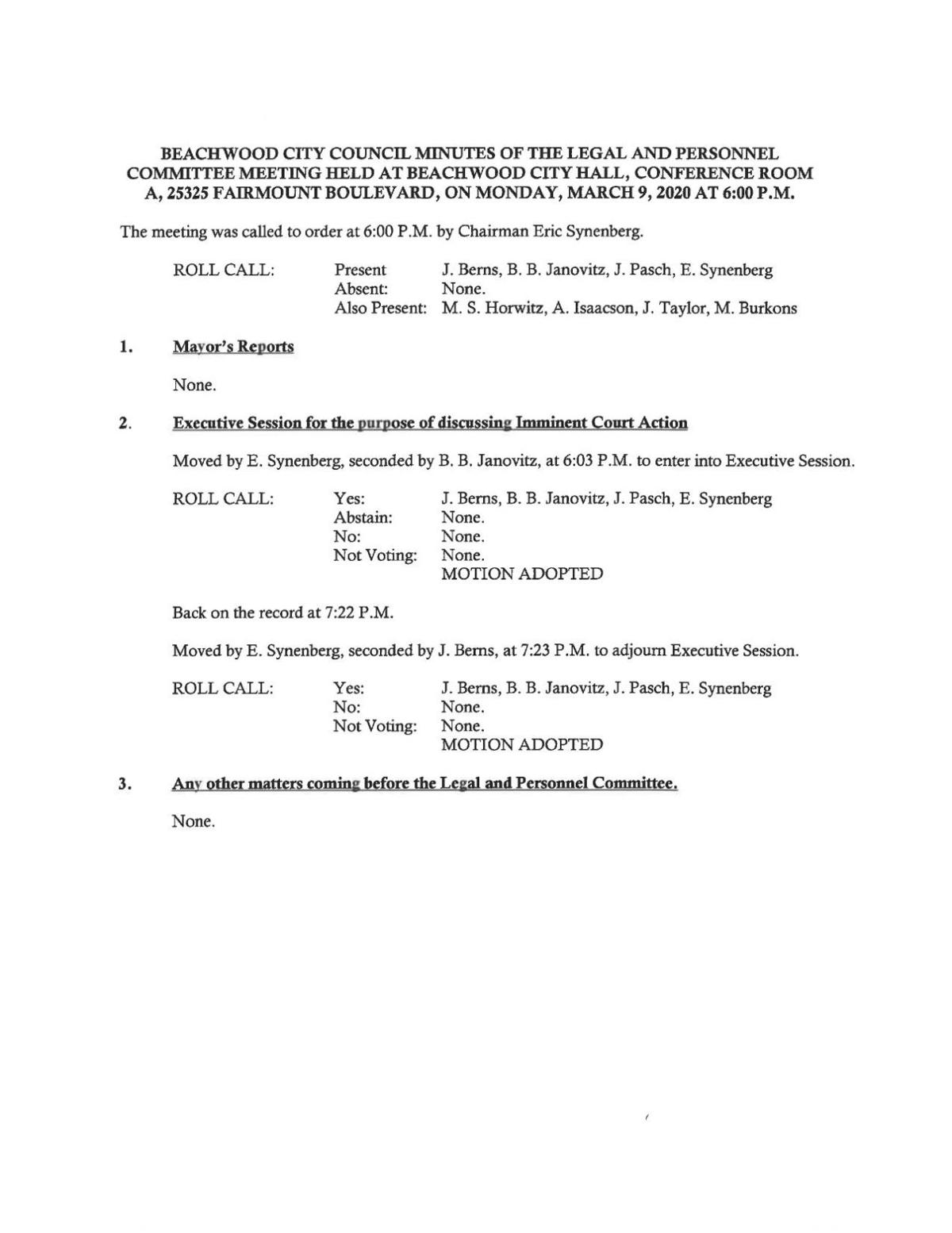 Multiple city council members told the CJN options were discussed, but no specific course of action was decided at that time.

Two lawyers, James A. Climer and John D. Pinzone, partners at Mazanec, Raskin & Ryder, Co., LPA of Cleveland, who were hired by Wichert Insurance to investigate the allegations, attended that meeting and billed NORMA for $5,386.65. Studenic also attended.

Heiser, Beachwood finance director, said he did not cut the check to Wichert Insurance and was never told about the claim or the settlement, a first in his career working in University Heights and Beachwood since 2012.

“Obviously, they didn’t want me to know,” he said. He said he has not yet received an invoice for the deductible.

While most council members declined comment on the issue citing personnel issues as confidential, Burkons wrote to the CJN he would not have voted to settle the claim because he did not believe the allegations met the criteria of a hostile workplace. He also had concerns about the process by which the claim was settled.

“This settlement should have never been agreed to without council’s knowledge or approval,” Burkons wrote in a June 22 statement to the CJN. “I don’t understand who from the city had the power (to) authorize the settlement. The law director was recused ... but the mayor was the subject of the complaint, he clearly has a conflict and can’t unilaterally decide to settle, at least without council approval. Doing it this way makes the city look terrible and gives residents a legitimate reason to distrust that we care about transparency. I can’t control if this doesn’t bother anyone else, but it bothers me tremendously and I made that known.”

Horwitz, in his July 8 text to the CJN, addressed Burkons’ concerns.

“I was a named party in the demand letter,” he wrote. “The insurance company was obligated to provide a defense to both the city and to me in my capacity as mayor.”

According to Burkons, council first learned of the settlement on June 1, after Crook had signed the agreement.

In a June 11 email to Calta, Burkons wrote city council wasn’t aware of the terms and settlement amount.

“Since we have not been made aware in advance of terms or amount of the settlement, it is impossible to determine if we disagree with the amount of the proposed settlement,” he wrote Calta.

Studenic wrote to Burkons in a June 16 email, "NORMA has a claims committee that I work with and was aware of the settlement."

According to the letter drafted by Crook’s lawyer Green, Horwitz engaged in three incidents of “inappropriate” conduct.

Green’s letter did not specify dates of the incidents. Specifically, Crook claimed Horwitz looked down her shirt and made an inappropriate comment about her tattoo that was partially showing.

Another incident took place in July 2019 “when Horwitz made a sexually provocative comment that he should punish (an implied spanking).”

Regarding her appearance, he also once asked her, “What is this look? I like this look?” a comment she perceived “to be made in an inappropriate manner,” according to Green’s letter.

In addition, Horwitz “made inappropriate and demeaning comments about other employees including members of city council and the fire department,” Green’s letter stated.

While the city would not confirm to the CJN the identity of the person, Crook confirmed to a CJN reporter when reached by telephone on July 6 that she is the employee in question. Documents provided to the CJN by Calta redacted her name and identifying information. The CJN also reached out to Green multiple times, who declined comment.

“I’m not going to be providing a comment at this time,” said Crook, who was hired in June 2015 and promoted in December 2016 under former Beachwood Mayor Merle S. Gorden. Crook is currently employed by the city.

The agreement and release, signed May 26 by Crook, contains a clause that said by accepting the settlement, she agreed not to make disparaging remarks about Horwitz or the city.

The incidents detailed in Crook’s demand letter had been previously investigated by Rendon, a partner at BakerHostetler of Cleveland, who was hired in August 2019 by city council as special counsel to investigate the mayor’s conduct at a cost not to exceed $30,000.

Rendon and an associate from BakerHostetler presented their findings in an executive summary that they read into the record at an Oct. 30, 2019, special city council meeting. The firm billed the city of Beachwood for $30,000, and wrote off an additional $22,741.25.

Crook’s demand letter came nearly two years after Horwitz placed his executive secretary, Deborah L. Noble, on paid administrative leave after he made an unspecified remark to her.

In a Feb. 9, 2018, memorandum, Horwitz directed Noble to turn in her keys at the end of that day. He offered her 10 weeks paid administrative leave in a severance package, starting the following Monday and running through April 27, 2018, according to a document received through public records requests by the CJN.

City council, fearing potential litigation after Noble retained attorney Mark Wachter of Wachter, Kurant LLC in Pepper Pike, later approved a confidential settlement of nearly $24,000 more than she was owed. Wachter told the CJN neither he nor his client threatened to file a lawsuit.

Noble was a 20-year city employee with positive evaluations, according to documents obtained by the CJN.

Since February, the CJN has submitted public records requests to Calta regarding the 2020 case and has been denied repeatedly in its efforts.

In a Feb. 21 email to the CJN, Calta declined the request on grounds that it was a “trial preparation document.”

Calta provided a copy of the demand letter on May 1, but redactions included not only the employee’s name and identifying information, but also details of the allegations, all of which had been previously made public in the BakerHostetler investigation.

“According to our records retention schedule, text messages need only be retained until they are no longer administratively necessary,” Calta responded, by way of denying the request.

The CJN revised its request in a Feb. 28 letter for the text messages.

Calta responded in a March 9 email, “The release of any other documents that may reference or even tangentially discuss the demand letter could potentially release information about the demand letter that has been deemed confidential.”

In addition, the CJN requested information about the settlement amount.

Calta responded by email, “If you are asking for a public record with the amount of the settlement, I do not have any records responsive to your request.”

On May 19, the CJN retained legal counsel in an attempt to obtain those public records.

On June 17, Calta provided a copy of the release agreement and a less-heavily redacted copy of Crook’s demand letter.

In anticipation of the publication of this story, Burkons also wrote his fellow city council members an email on June 18.

“When the CJN story comes out, I hope all of you stop trying to dismiss it is sensationalism, click bait, irresponsible journalism, et cetera,” Burkons wrote. “I imagine the article will focus on the 1) the mayor’s attempt to sweep this under the rug and quietly settle a claim against the city where his behavior is the subject of the claim, without council’s knowledge or approval and 2) the city denying the existence of (a) document that lays out the terms of the settlement until CJN hired a law firm and threatened to file suit, and only after that, was the document, whose existence was originally denied, was finally released.

“This is not sensationalism or click bait reporting so all of you need to stop trying to dismiss it as such. This is accurate reporting and any responsible reporter would write this exact same story. It makes the city look terrible and it makes all of us look terrible for allowing it to happen this way. I can’t control if no one else wanted to speak up and/or is bothered by this, but I certainly have made that clear from the start.”