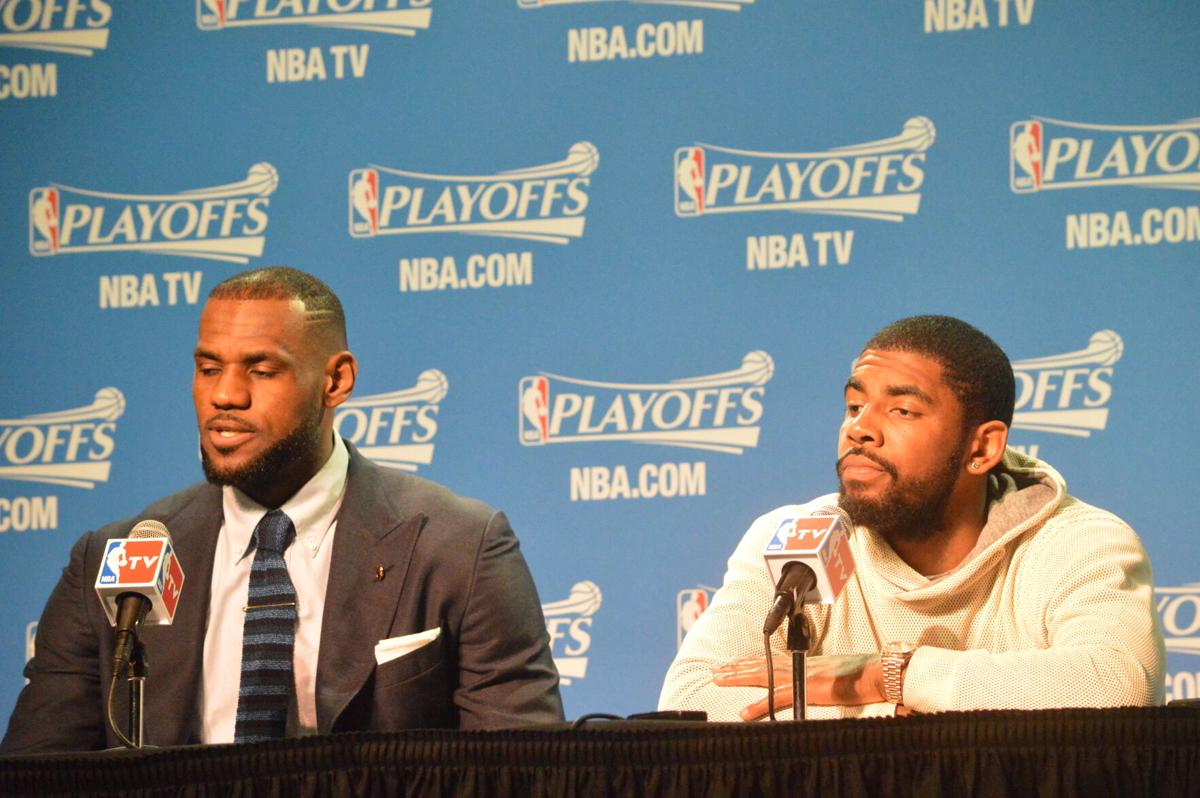 Select players are brought to NBA postseason press conferences instead of reporters having access to locker rooms. Sometimes the media can wait more than one hour for a specific player to arrive. LeBron James, left, and Kyrie Irving held their share of press conferences when they played for the Cleveland Cavaliers.

A few weeks back I was asked the question about whether professional athletes should have to speak to the media. Kyrie Irving, the former Cleveland Cavs guard and current Brooklyn Nets star, took a $35,000 hit for not speaking to the media. He called the media “pawns.”

My first thought is “no,” they should not have to speak to media. Nobody should be forced to do something against their will.

However, the reality of saying “no” by declining interviews is that you are still saying something.

The odds of looking like a prima donna are high. You decide.

Irving may not be too far off for some parts of the media. The leagues and broadcasting networks are partners. Partners is a key word. Essentially, when you watch a game, you are really watching a two- to three-hour commercial for the team and the network. It is entertainment, after all. It is OK if you do not get the hard-hitting questions during a game. Most people watch sports to escape reality.

Full disclosure. I work for a radio station that has the radio rights for the Cleveland Browns. Not once has my boss ever told me to hold back a thought on the football team.

If you are playing at the professional level, the way to make more money is to be great at your sport and to make sure people know your name.

While some athletes do not realize it, it is to their advantage to speak to the media. They control the message. They can control their own brand. It is amazing how just being nice in an interview allows fans the perception they think they are getting to know the player on a personal level.

In almost 35 years of being around pro sports, not once has anybody ever asked me, “How did he hit that curveball? How did she make that shot? What was the technique that lineman used?” The question always is, “What is that person really like?”

Not all athletes are jerks, and not all media are vultures.

Free publicity for the leagues is the way to grow the game. Like winning the lottery, the thought of being in the spotlight to win a big game and being a sports hero is extremely attractive. It is the stuff that kids lying in bed at night dream about.

Major League Baseball would love for the Los Angeles Angels’ Mike Trout to be more of a spokesman for the game. Trout does not want to be that man. Good for him, bad for the game.

The days where late great sportswriter Hal Lebovitz of The Plain Dealer and the Lake County News-Herald decided to ride in the ambulance when Indians pitcher Herb Score was hit in the head, rather than cover the rest of the game, are long gone.

The media are confined to interview via Zoom for now. The COVID-19 pandemic may have changed press conferences forever. Media relations staffs have more control of a team’s content than ever. Social media allows players to have more control than ever.

As we have seen, social media can backfire on athletes very quickly.

I always tell kids and groups there is always more to the story than what you read, see or hear. Be active in the content you are consuming.

Now, we just need to figure out who is moving the chess pieces.

The Columbus Crew SC is about to move into a new $313.9 million stadium. The team tried to move away from the nickname “The Crew” and go to a new logo with branding.

I can understand the idea of change. But this was just silly. The Crew has always stood for something in Columbus. Here is a big shocker: Not everybody loves the Buckeyes in Central Ohio.

In the 1990s, when the soccer league was born, the team offered an alternative to cheering for the Scarlet and Gray. The fan pride for the franchise has grown from playing at Ohio Stadium, to the state fairgrounds, and soon the team’s new home at Astor Park.

The Crew’s fan base has fought hard to keep the team in Central Ohio. Even with a new logo or attempting to dissolve out the nickname, the fans let ownership know it was a bad idea.

It was much ado about nothing. But, in a world where money makes everything in the world move, the ownership group of the Haslam family and Dr. Pete Edwards listened to the fan base. Bravo.