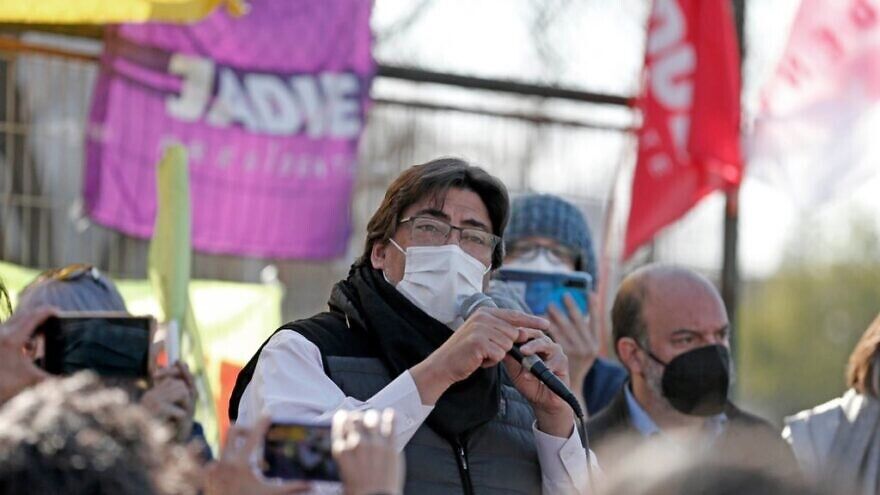 The anti-Zionist activist Roger Waters, who also doubles up as the bassist of veteran rockers Pink Floyd, gave a ringing endorsement last week to one of the candidates in the Chilean presidential election, which takes place later this year on Nov. 21.

Waters’ preferred candidate, Daniel Jadue, is both a Communist Party representative and a member of the 300,000-strong Palestinian community in Chile, the largest Palestinian Arab diaspora outside of the Middle East. With those credentials, it’s no wonder that Waters – a fanatical advocate of the movement to boycott the Jewish state – praised Jadue as the counterweight to “the Pinochet factions that remain in Chile, in that great and beautiful country. … I have no doubt that he is a real good man and we need him.”

It is true that the former dictator General Augusto Pinochet, who died in 2006, still has his supporters in Chile. Pinochet achieved notoriety in September 1973, when he led a right-wing coup against the government of President Salvador Allende – a left-wing coalition led by an avowed Marxist, but one that was democratically elected all the same. For this reason, the intimate association between communism and brutal authoritarianism that remains painfully clear today in China, Cuba and Venezuela is less obvious in the Chilean context.

As he rides a populist wave that has propelled him to the position of leading candidate in the opinion polls, the 54-year-old Jadue is comfortably placed to tout his democratic credentials, despite his Communist Party sympathies. All this is terrible news for Jewish citizens of Chile – and there are only 20,000 of them – who look at Jadue’s long record of anti-Semitic and anti-Zionist statements and wonder what the immediate future has in store.

In common with the rest of the world, antisemitism has risen precipitously in Chile during the last decade; Jadue’s potential election would take it to another level, which is perhaps why a bipartisan group of U.S. congressional representatives wrote to U.S. Secretary of State Antony Blinken last week to point out that “a systematic campaign of delegitimization against Israel” in the country was rapidly crossing “the line into antisemitism.”

If Jadue was a Jew with extensive family in Israel, his candidacy would probably be imperiled by a torrent of negative campaigning pushing the theme of dual loyalty. “Which comes first? Chile or Zionism?” One might imagine his adversaries asking with a hint of delight.

But as a Palestinian who celebrates his Arab heritage and is frequently seen in public with a keffiyeh wrapped around his shoulders, Jadue can rest assured that these same critics of supposed Jewish dual loyalties would never caricature him as a “Palestine-Firster” or accuse him of placing the Palestinian cause above the national interests of Chile. In addition, since he is hardly in a position to offer Hamas or any other Palestinian terrorist group military support, his solidarity with a nation located 8,000 miles from the Chilean landmass will largely be political, expressed through rhetoric and symbols – streets named after Palestinian terrorists, for example – and legislative as well, conceivably through the adoption of the boycott, divestment and sanctions campaign by Chile’s parliament or by different municipalities with government encouragement.

This prospective state of affairs would amount to another example of how government policies of anti-Zionism are really a mask for the antisemitic persecution of local Jewish communities. We witnessed precisely this phenomenon in the Soviet Union and in several of its satellite republics in Eastern Europe during the Cold War. We witnessed it as well in the Arab world, particularly after Israel’s creation in 1948, when Jewish communities were ethnically cleansed wholesale from countries like Egypt and Iraq. Why should Jadue not follow the same path in Chile? After all, his personal predilections already lean in that direction, as evidenced by the revelation last month of Jadue’s high school yearbook from 1983. The entry about him remarked affectionately on the would-be president’s desire to “cleanse the city of Jews” and suggested that a suitable gift would be “a Jew for to him to use as target practice.”

There is a strong chance that a Jadue-led experiment in socialism in Chile will fail, as it did in Brazil, where the Workers Party led by the much-heralded labor organizer Luis “Lula” Ignacio da Silva collapsed amid systemic corruption and abuse, or as it is doing in Cuba now, where thousands of protesters have taken to the streets against the Communist Party’s political repression and economic mismanagement. Should that transpire, then Jadue might decide –

following the same approach of his beloved, lamented Soviet Union – that selecting Jews for “target practice” by blaming them and the “global” forces arrayed behind them for the country’s woes is a strategy that will yield at least short-term benefits.

There is very little that outsiders can do to still the rise of Jadue. Should the polls be correct and he wins in November, he will do his level best to portray himself as the reincarnation of Salvador Allende, a principled socialist facing ejection from office by the ever-present machinations of the CIA. As unlikely as this outcome is, it is a narrative that will appeal to many Chilean voters for historical reasons. The bigger question between now and November is whether Chileans will revisit the successive failures of the far left in Latin America – where the promise of massive wealth redistribution invariably gives way to corrupt one-party rule that immiserates the masses just as the old regime did – and decide that Jadue is not for them, after all.