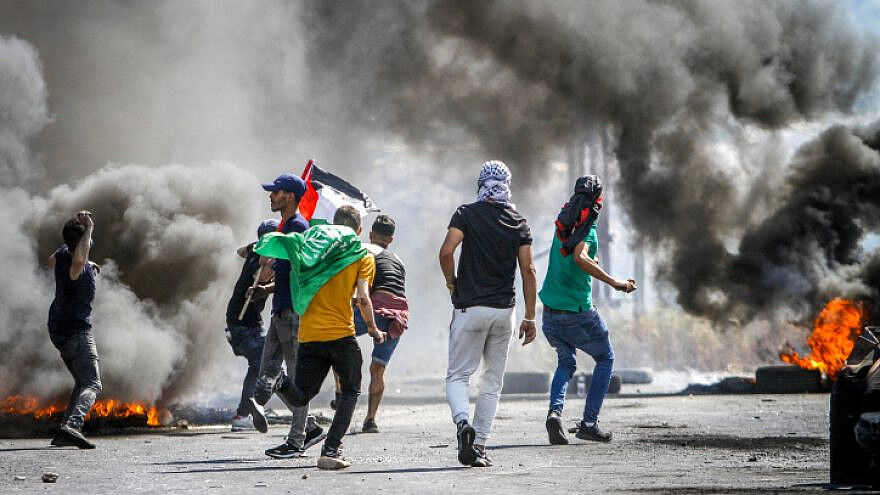 Palestinian protesters clash with Israeli security forces as demonstrations near the Hawara checkpoint, south of the West Bank city of Nablus May 14, 2021.

Judging by the present pattern, the next conflagration over Gaza – and by extension, the still-unresolved Palestinian question– will occur in 2028 or so, just in time for the 80th anniversary of Israel’s creation. And judging by the present mood, the seven years until then will yield as little political progress as have the past 13, a period in which we’ve witnessed two full-scale wars between Israel and Hamas, with a third now in the offing.

In the surge of commentary that has accompanied the escalation of hostilities during the last few days, more than a few writers have pointed out that the Hamas leadership is fighting a fruitless war that it’s destined to lose. And when Hamas does lose, it will portray its defeat to the captive Gazans as a victory, just as it did in 2009 and 2014. This is not entirely wrong; when you are a terrorist group with no democratic mandate to govern the territory under your control, surviving a war with your overlord status intact counts as a victory.

Again, the pattern of recent history suggests that once the hostilities end this time around, the legal and political warfare directed against Israel will intensify. The contention that Israel is the most horrible of anachronisms – an apartheid state that discriminates between its citizens based on their racial origin – will be advanced with renewed vigor, through the campaigns of pro-Palestinian NGOs to convict Israeli political and military leaders for war crimes, alongside the advocacy of the various groups urging boycotts of the Jewish state.

The allied trend of holding Jewish communities outside of Israel to account for these fictitious Israeli crimes will certainly continue and probably get worse. In 2009 and 2014, Jewish communities learned through bitter experience that renewed conflict involving Israel’s armed forces will unleash physical assaults on Jews and attacks on Jewish property thousands of miles away from the region. Now – notwithstanding the fact that the Jewish population in Europe is at its lowest level since the year 1170 (according to one recent study) – we have every reason to expect these outrages to become more frequent, more brazen and more violent.

As always, there will be those European politicians who express their shame that on the continent of the Holocaust, the windows of synagogues are once more being smashed, just as there will be those who insist that the miseries inflicted upon European Jews are one more item on the list of Israeli offenses. Were it not for Israeli aerial operations in Gaza or the evictions of Palestinians in Sheikh Jarrah, these politicians of the left impress upon us, arsonists wouldn’t be setting fire to synagogues, elderly Jews living alone wouldn’t be sitting frightened in their homes, and wearing a kipah on public transport wouldn’t be an invitation for a lethal beating. They do not ask themselves (and they never will) whether Israel’s military engagements can truly explain why Jews are insulted as the offspring of “apes and pigs” at Muslim-organized demonstrations in European cities, or why video recordings of humiliating attacks on haredi Jews as mark of “solidarity” with the Palestinians have become an internet meme from Antwerp in Belgium, to Brooklyn in New York, to Jerusalem in Israel.

As Israel-related antisemitism intensifies, there will be a parallel trend of antisemitism denial – mostly driven by academics, with the occasional musician or novelist making a guest appearance. The mantra that anti-Zionism is just an expression of anti-racism, rather than a form of hatred of the Jews themselves, will be chanted more earnestly. National governments, city councils, educational bodies, law-enforcement agencies and other institutions will be lobbied by self-styled experts – many of them left-wing Jews teaching social sciences at various universities – to disregard any complaints of antisemitism that are connected to the vilification of Zionism or Israel.

Is there an alternative to this chain of events? The dynamic outlined above unfolds because hot wars between Hamas and Israel typically end with the former chastened yet undefeated, and the latter having dealt powerful blows to the enemy’s infrastructure, yet knowing that its defense forces will likely have to perform the same dangerous operation all over again a few years from now. As for the overthrow of the Hamas regime by the Israel Defense Forces that would mean resuming the direct occupation of Gaza, which would quickly become a Lebanese or Iraqi-style death trap for Israel’s young soldiers. With that option in the wings, leaving a weakened Hamas in power, and therefore responsible for the welfare and governance of the Gazan population, seems far preferable for Israel.

Still, once this path is chosen, the trends of previous years will be repeated with each key element in the pattern – rising antisemitic violence abroad, legal offensives targeting Israeli citizens – becoming more pronounced than the last time. The bitter truth, for the present at least, is that escaping this pattern requires a complete transformation of how a good portion of the world, especially its Muslim population of almost 2 billion, perceives the Palestinian issue.

That transformation would mean concentrating on the Palestinian future and not the Palestinian past. It would mean jettisoning the so-called “right of return” in favor of a generously funded international program to compensate Palestinian refugees and integrate their descendants as citizens of the countries in which they were born. It would mean abandoning the tactics and language of boycotts, and embracing joint entrepreneurship. It would mean recognizing and disavowing wholesale the deep-seated folk hatreds that lead some people to set synagogues on fire, even when they grew up with Jews as their neighbors. It would mean telling the Palestinian people, in plain terms, that their own founding myths are the biggest obstacle to their children’s advancement.

But just as it is not the job of Jews to cleanse the world of antisemitism, it is not Israel’s job to reform Palestinian society and politics. That is a task for Palestinians themselves. All we can do is hope that the cynics among us are proved wrong about the zero expectations we presently entertain when it comes to that process. That would really go against the historical grain.