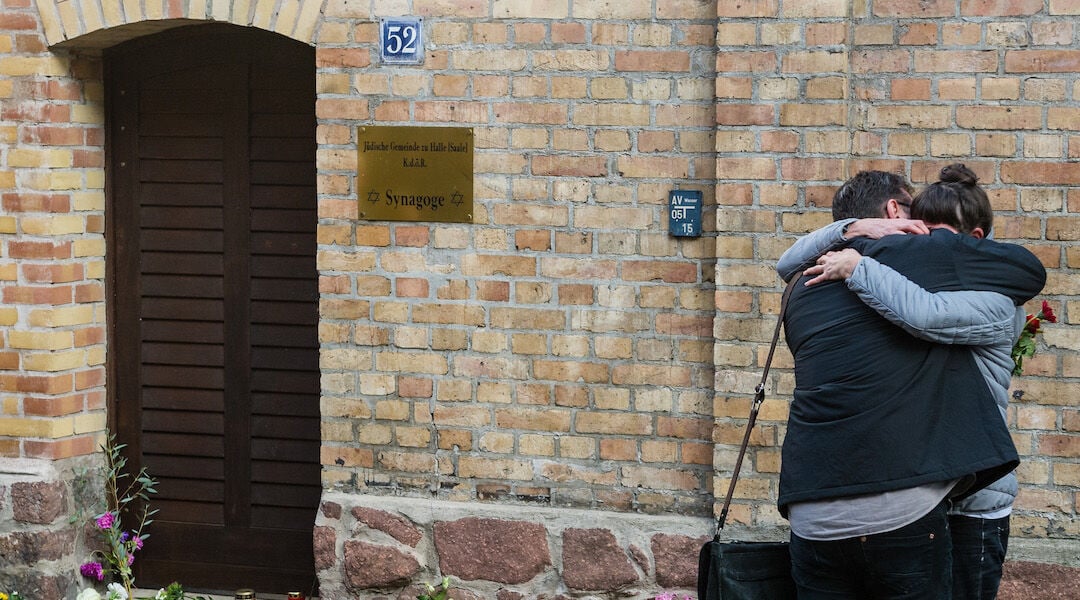 People mourn in front of the entrance to the Jewish synagogue on October 10, 2019 in Halle, Germany.

There were more than 2,000 reported antisemitic incidents in Germany in 2020 and just under 2,000 the previous year. That’s around or five or six incidents, some of them involving violence or verbal abuse, every day.

If that number is sobering, bear in mind that it is definitely an underestimate because so many antisemitic outrages go unreported. Studies of this particular problem reveal different motives among victims for not reporting their ordeals. Some don’t believe that what they experienced would warrant police time, some feel a sense of shame or embarrassment, and many fear that going to police would lead to them becoming victims of further reprisals.

Against this background, it’s ironic that the most discussed antisemitic incident in Germany of late – at least since the 2019 attack by a neo-Nazi gunman on a synagogue in the city of Halle during Yom Kippur – is one that might not have happened. I say “might” since police are still investigating the incident, though evidence published in the German media over the last week certainly raises questions over the original complaint of antisemitic discrimination.

The individual at the center of the controversy, Gil Ofarim, is a well-known Jewish musician in Germany whose father is an Israeli. As was reported in myriad news outlets around the world, earlier this month he was in Leipzig, where he’d reserved a room at the city’s Westin hotel. As an ashen-faced Ofarim explained in an Instagram video that went viral, moments earlier he had been told by a hotel employee to “pack up your star” if he wanted to get checked in. Throughout the video, he displayed the Star of David pendant around his neck that sparked the employee’s alleged remark, telling viewers that he wore it all the time.

The outpouring of sympathy was immediate and generous. Some commentators observed acidly that less than a century ago, Ofarim would have been beaten, arrested and thrown into a concentration camp for not wearing a Star of David on the streets of a German city. The night after Ofarim publicized his account of what happened at the Westin, more than 600 protesters gathered outside the hotel for a spontaneous demonstration against antisemitism.

In the meantime, the Central Council of Jews in Germany declared its solidarity with Ofarim, while the country’s federal anti-discrimination agency warned the Westin that there would be “consequences” to this act of antisemitic discrimination. As for the hotel, the antics of its senior management seemed to only worsen what was already a public-relations disaster. The morning after Ofarim’s video appeared online, a group of employees gathered outside hotel to unfurl a banner which showed the national flag of the State of Israel alongside a star and crescent symbol representing Islam. This ham-fisted attempt to press home a message of inclusivity simply demonstrated, as one Jewish leader argued, the lack of understanding that “Jews are a part of German society.”

Later the same day, as demonstrators gathered outside the hotel, a couple of the journalists among the crowd noticed that a particular private security firm had been hired to guard the hotel’s entrance. The firm, Pro-GSL Security, is known for its links with the neo-Nazi scene in Leipzig, often providing muscle for demonstrations and rallies organized by far-right and anti-immigrant organizations.

As the controversy wore on, the hotel insisted that Ofarim’s account of what had happened was essentially fabricated. This led its growing army of critics to ask why an apology to the musician hadn’t been forthcoming, instead of what appeared to be increasingly desperate claims of innocence.

Last Wednesday, images from the CCTV video of the hotel’s reception area showing Ofarim attempting to check in were published throughout the German press, likely leaked by the Westin hotel that had just concluded an internal investigation that deemed its employee to be innocent of the accusations of antisemitism. What stood out in these images was the fact that Ofarim’s Star of David necklace was nowhere to be seen. When the exact words used by Ofarim on Instagram were recalled – “I was standing in the line wearing my necklace which is my right and which I have worn all my life” – this new evidence seemed damning indeed. Speculation soon followed in the German media that there was a reason no witnesses had come forward; there had been nothing to report.

Ofarim’s response was to double down. There was nonetheless a notable shift in his story; whether or not he had been wearing his pendant was not the issue, he said, and he couldn’t remember if he’d worn it over or under his shirt that particular evening. The Star of David pendant was part of his public image, he argued, and the employee had made the comment about packing it up because they had known this about him.

In an interview last Thursday with Germany’s Stern TV, Ofarim confirmed he was pursuing his complaint against the Westin. He confessed he had been deeply saddened by the abuse thrown at him – some of it openly antisemitic – on social media since the CCTV images were published, and he worried his experience might dissuade other Jews from reporting harassment or discrimination.

Before speculating over whether or not Ofarim is telling the truth, it should be borne in mind that police investigation is not over, that the Westin hotel has kept its internal 118-page report into the incident private, that we have only seen a handful of CCTV images and that, crucially, there is no audio recording that could confirm whether or not the employee really did tell him to “pack up his star.” Unless there is another twist in this story, it’s distinctly possible that the outcome will be one in which lack of empirical evidence leaves Ofarim’s complaint in the dust.

Now, I don’t know much about Ofarim, but I do know celebrities are vulnerable to a certain type of star paranoia and that they can be opportunistic when it comes to the media. If this is the case here, then it will be a gift to those who believe that antisemitism is just a cynical means for Jews to morally blackmail non-Jews.

Still, Ofarim is correct when he worries that Jews who encounter antisemitism in their daily lives may be even more reluctant to report it, having heard about seen his experience. For if inaccuracies surface in the victim’s account or a lack of evidence gives the perpetrators an edge, then the response of the media and much of the public is harsh and unforgiving, as Ofarim has just discovered. “Ofarim has certainly achieved one thing,” wrote the German journalist Matthias Hochstatter. “He has shown that antisemitism in Germany is still firmly in the minds of Germans 75 years after the Holocaust.” The problem is that in many of those minds – 40%, according to a World Jewish Congress poll in 2019 – Jews “talk about the Holocaust too much,” and that also – 22% of respondents in the same poll—“people hate Jews due to the way they behave.”

This is the environment into which Ofarim’s claims of antisemitism, along with the Westin hotel’s counter-claims, have been catapulted. Either way, rest assured that those daily incidents I mentioned at the beginning won’t be the end of such statistics.