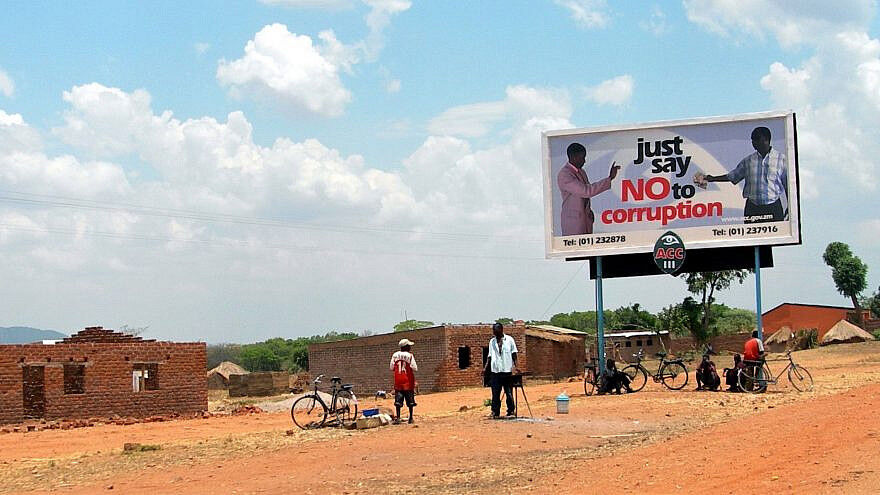 Passover is a celebration of freedom, but its underlying story is a salutary reminder that freedom is a fragile thing and that achieving it often requires extraordinary sacrifices. So it seems fitting at a time when Jews ponder the broader significance of the Exodus from Egypt to examine how the cause of human freedom is faring around the world today.

The answer, sadly, is that freedom – our core rights to speak and publish without censorship, to follow our religious beliefs, to vote for our leaders, to live under the protection of the rule of law – is in a rather dismal state. The recently published Freedom in the World 2021 report by the U.S. NGO Freedom House details this picture in all its harshness.

2020 was the 15th consecutive year that Freedom House, originally established in 1941 to promote American participation in the battle against fascism, registered a decline in global freedom. “The long democratic recession is deepening,” its new report warns.

Only one in five residents worldwide lives in a country that can be designated as “Free” (as opposed to “Partly Free” or “Not Free”). That is, in societies run by democratically elected and accountable governments where basic civil and political rights are guaranteed. Nearly 75% of the world’s population lives in a country that experienced a deterioration of freedom last year. In several countries where citizens have taken to the streets in huge numbers to demand democratic rights, such as Venezuela and Belarus, civil liberties have declined even further, in the cruelest of consequences.

China and Russia, the two great-power foes of freedom in the world right now, have benefited enormously from these reversals, as well as from the deeper crisis of faith that has afflicted many citizens of democracies in the United States, the European Union, Australia and other free nations in recent years. “They are both cheering the breakdown of democracy and exacerbating it, pitting themselves against the brave groups and individuals who have set out to reverse the damage,” observes the Freedom House report.

Meanwhile, the autocrats have a number of tools at their disposal to cement their rule. Mass arrests and incarceration have greatly increased in volume in recent years; in China alone, more than 1 million Uyghurs have been imprisoned in detention camps as part of Beijing’s genocidal campaign to wipe out the national and cultural identity of its Muslim minority in its northwest. Turkey, Egypt and Russia have also witnessed an explosive growth in the numbers of political prisoners in the last decade.

There is also the deliberate spread of disinformation, both at home and increasingly to audiences in the Western democracies, the growing sophistication of surveillance techniques, and, over the last year, the tactical advantage provided by the COVID-19 pandemic and its social-distancing requirements, meaning that people normally in regular contact have been physically isolated from each other to an unprecedented extent.

At the regional level, as at the global, there is little that is cheering in the latest Freedom House assessment. In the Middle East, despite a year of diplomatic transformation that saw Israel ink normalization treaties with the United Arab Emirates, Bahrain, Sudan and Morocco, the map of freedom has remained depressingly familiar. Out of all the states in the region, only Israel is included in the community of truly “Free” nations. Neighboring Lebanon just about manages to sustain “Partly Free” status, while everywhere else is manifestly “Not Free.” On the scale of 100 points operated by Freedom House for its global freedom rankings, Israel scored 76. Its foes in the neighborhood – Iran, Qatar and Turkey – managed 16, 25 and 32 points, respectively. But as vast as those differences are, Israel’s new allies in the region mostly ranked even lower. The UAE managed 17 points out of 100, as did Sudan, while Bahrain scored 12 (Morocco is higher at 37). Saudi Arabia, which will likely sign a peace treaty with Israel sooner rather than later, scored a paltry seven.

Make no mistake, these scores are deserved. Whether or not they have signed peace treaties with Israel, the systemic violation of the rights of individuals and groups is ingrained into the practice of regimes throughout the Middle East. In Tehran as in Riyadh, the advanced ideas of freedom that we regard as more or less established in the West – the right to speak candidly and outrageously, the independence of families and communities from state interference, the right to love another person of our own choosing – are seen as existential threats that must be crushed with the full might of the state.

In the Jewish tradition, while political authority is presented as something to be respected, the concentration of political power should be limited, and those who exercise it should themselves be accountable to the law. Only in this way can a society start to be considered fair or just. Yet many Jews, especially in Israel, tend towards political realism in their view of the outside world – spotlighting other countries’ tyrannical practices, especially if those countries are newly gained friends, does not comport well with this outlook.

In my view, such an approach is short-sighted. To begin with, countries where power is rooted in legitimate authority tend to be more stable and predictable than those ruled by a single party or a committee of clerics. In that sense, Israel has a good deal to gain from its neighbors adopting democratic reforms. However remote that possibility may currently be, any signs of life should be encouraged, particularly on matters such as judicial accountability, personal status and religious freedom.

More immediately, what the latest Freedom House report proves beyond doubt is that the world’s worst human-rights crises are not the priority even for those whose responsibility is to protect citizens from the excesses of their overlords. The United Nations remains a forum where any number of opportunities exist to censure Israel at committees, conferences, forums and the like, but far fewer when it comes to censuring China, North Korea or Ethiopia. If we want to argue effectively that global institutions operate a double standard when it comes to Israel’s alleged abuses, then it is imperative that the Jewish community advocates for those causes that fall by the wayside as a result.