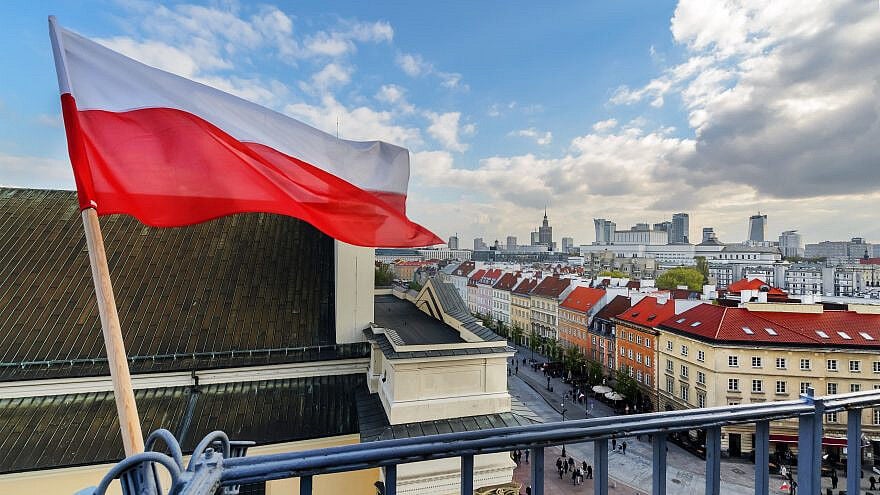 The Polish flag with Warsaw in the background.

“Distortion” is not quite the same thing as “denial.” The claim that the Holocaust is a fabrication is a wicked lie that is relatively straightforward to counter. Not quite so easy to deal with are the “distortions” – revisionist accounts of the Holocaust that don’t question the basic event, but do question key aspects, for example, by minimizing the number of victims slaughtered by the Nazis, or by posthumously honoring Nazi criminals and their local collaborators as national heroes.

No. 1 on a list of 10 characteristics of Holocaust distortion assembled by the IHRA emphasizes that minimizing the role of “collaborators and allies of Nazi Germany” is very much included. The trend of doing precisely that has swept Eastern Europe for more than a decade, resulting in government-led protestations from the Baltic states to Poland and Hungary that it was “the Germans” – and only the Germans – who were responsible for rounding up and murdering their Jewish “fellow citizens.”

Holocaust distortion is nothing new, however. Indeed, the trauma of the Shoah was still registering among the survivors when the Soviet Union, under the direct instructions of Joseph Stalin, decided to expunge any specifically Jewish element from the official narrative of the “Great Patriotic War.” During the nearly 50 years of Communist Party rule that followed, the very word “Holocaust” was absent from Soviet historiography, dismissed as a “Zionist” construct that placed a “chauvinistic” stress on the particular sufferings of Jews at the hands of the Nazis.

In tandem with the insistence that Jews were no more persecuted by the occupiers than any other nationality, the Soviets came up with another insidious myth: that “Zionists” had actively collaborated with the Nazi oppression of the Jews to the point that they were equally culpable for the massacres that followed. This line was eagerly swallowed up by the Arab world, and then by large sections of the western left, as part of the ideological offensive against Israel and Zionism during the Cold War. And, of course, it is still in circulation today, alongside more recent variations on the same theme – that Israel treats the Palestinians like the Nazis treated the Jews, that Israel manipulates the Holocaust to milk European governments for reparations payments, and so on and so forth.

History is always rich with ironic episodes, and the spectacle of fiercely anti-Communist nationalist politicians playing the same deceitful games with Holocaust memory as the Stalinist bureaucracies they overthrew 30 years ago is certainly one of those.

Again and again, Poland and its nationalist government have been at the heart of this increasingly painful turn of events. And Poland is an especially interesting case of Holocaust distortion because the government has generated a series of harmful revisions about the Holocaust that rest upon two indisputable facts.

Fact one: Poland was under the direct control of Third Reich after the German invasion of 1939; the Nazis did not install, and were not assisted by, a local puppet regime, as was true for France, Croatia, Romania and other occupied nations. Fact two: Poland experienced a distinctly brutal fate under the Nazis, reduced to a slave status that took the lives of nearly 2 million non-Jewish Polish civilians.

These two sobering facts have been stretched and twisted by the government and its supporters to determine that Poland underwent the very same Holocaust that was inflicted upon the Jews. And since 2018, any historian who asserts “publicly” that “the Polish Nation or the Republic of Poland is responsible or co-responsible for Nazi crimes committed by the Third Reich” can become the subject of a civil lawsuit.

Currently, two distinguished historians, professors Barbara Engelking and Jan Grabowski, are on trial for their 2018 jointly authored study, “Night Without End,” which examines the fate of Jews who escaped into the Polish countryside during the occupation, many of whom were delivered into German hands by Polish collaborators. The trial of the two scholars has been decried by Holocaust experts around the world, including Israel’s national memorial, Yad Vashem, which denounced the legal proceedings as “a serious attack on free and open research.”

In an even more sinister development on Feb. 3, the editor of the website Jewish.pl – an indispensable source of news and features about Jewish life in Poland – was called in for questioning by police in her home town to answer for an article she wrote last year about the Holocaust.

An anonymous complaint to the public prosecutor against the journalist, Katarzyna Markusz, accused her of violating Article 133 of the Polish constitution in her piece. That article states: “Whoever publicly insults the Nation or the Republic of Poland shall be subject to the penalty of deprivation of liberty for up to 3 years.”

At issue was a passage in Markusz’s article that poignantly asked: “Will we live to see the day when the Polish authorities also admit that hostility toward Jews was widespread among Poles, and that Polish complicity in the Holocaust is a historical fact?”

During her questioning by police, Markusz was asked by one officer whether it had been her intention to “offend” the Polish nation (“Of course, not,” was her answer.) The fact that police officers in a European Union member state are even asking questions like these speaks to the climate of illiberalism that prevails in Poland more broadly. What it suggests is that, if anything, the mood is hardening, and that more libel trials pushing the message of Polish absolute innocence during the Holocaust can be expected.

We may be coming to a point where further discussion and debate with the Polish authorities becomes fruitless, and that will pose an uncomfortable challenge to the custodians of Holocaust memory. Poland was the epicenter of the Holocaust, and it’s impossible to imagine the process of memorialization without it – the land where the Germans sited mass extermination camps like Auschwitz and Treblinka, and where Jewish resistance fighters, in 1943, staged a historic armed uprising in the Warsaw Ghetto. But if its present government continues to force its dangerous and historically flawed interpretations of the Holocaust upon the rest of the world, then we are entitled to ask whether this same government can continue to be a partner in the ongoing duty of commemoration.