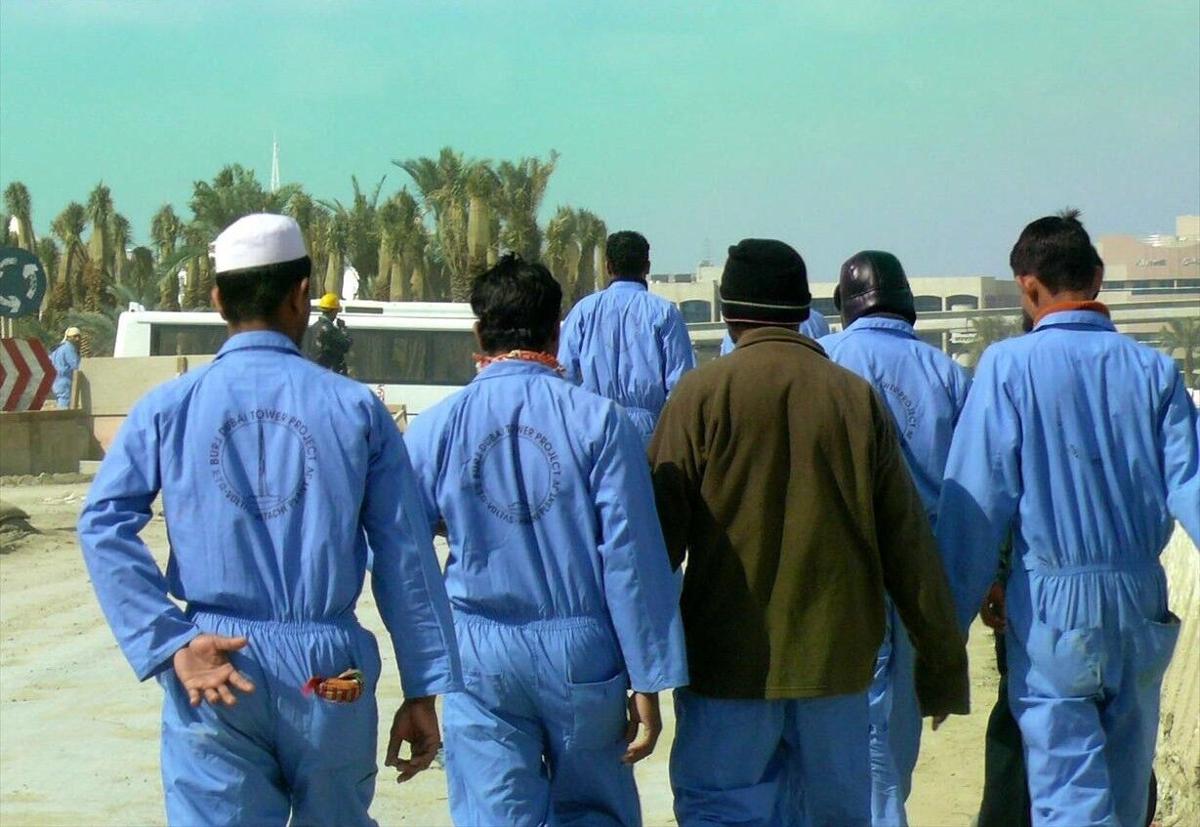 Construction workers at the Burj Dubai construction site in Dubai in 2008.

There’s an old adage of disputed authorship that has traveled down the centuries: In times of war, truth is the first casualty. As the English writer Samuel Johnson explained it in the 18th century, war breeds “the falsehoods which interest dictates and credulity encourages.” That has always been the case.

But can one make the same argument in reverse … that the truth is also a casualty of peace? I am asking this question in relation to the “Abraham Accords,” the series of historic bilateral normalization treaties reached in the fall of 2020, first between Israel and the United Arab Emirates, and quickly after that, between Israel and Bahrain, Oman, Sudan and Morocco.

Those treaties were signed with enormous fanfare, and even now, what some have called “the spirit of the Abraham Accords” remains visible. This is especially the case on social media, as Twitter users continue to marvel at agreements that seemed unthinkable 20 years ago. Weddings and bar mitzvahs in Dubai? Israeli surfers in Oman? The incredible commercial potential of peace between creative, entrepreneurial Israel and the wealthy, import-hungry Gulf Arab states? The spiking of anti-Semitism and anti-Zionism from the school textbooks of these same countries? The opportunity for Mizrahi Jews to acquaint themselves with the lands and cultures from which their ancestors were expelled? A top female executive with Etihad Airways speaking publicly in Hebrew? What, frankly, is there not to celebrate?

These achievements are real, and so the atmosphere of sheer positivity around them is understandable. Yet the positive environment of peace can be as censorious of the truth as the negative environment of war, because as Johnson would have said, “interest dictates” that there are certain subjects we should not address and certain observations we should not make about our new friends, lest that peace be disturbed.

What follows, therefore, outlines a fundamental truth that risks becoming a casualty of the Abraham Accords, presented to both Jewish and Arab enthusiasts of these agreements in a spirit of open-mindedness.

A modern form of slavery, known as the “kafala system,” still prevails throughout the Arab Gulf, where it chains together millions of migrant workers. To call this system “slavery” is no rhetorical sleight of hand; in the UAE, Bahrain and Oman, as well as Kuwait, Saudi Arabia and Qatar, Arab employers control every aspect of the lives of the foreign workers they exploit, including the elementary human right of these workers – from Bangladesh, India, Nepal, Pakistan and further afield – to come and go as they please.

Over the last decade, the kafala system has attracted plenty of media attention, mainly because of the appalling plight of migrant workers in Qatar building stadiums and other facilities for the 2022 soccer World Cup. The problem is as acute in the UAE, where nearly 8 million migrant workers comprise 80 percent of the total population. This means that the vast majority of residents in the UAE live without any meaningful rights at all.

The swanky hotels of Dubai are a universe away from the cramped, miserable conditions that most migrant workers have to endure in the very same city. Once they arrive in the UAE, their passports are confiscated by their employers, who then decide where these workers are housed and the pittance wages they are paid, even determining what they are allowed to eat and when they are permitted to visit the bathroom. Average monthly wages are less than $200, while working hours range from 16 to 21 hours per day, with no breaks in between. The situation is particularly dire for female domestic workers, who are compelled to work weekends as well, and often find themselves on the receiving end of physical and sexual abuse from their employers.

Despite a regular flow of lacerating reports from human-rights organizations, media exposes of the conditions faced by migrant workers and even occasional statements of condemnation from foreign dignitaries, the Gulf nations continue to maintain their kafala system while offering assurances that major reforms are in the works. But those reforms never manifest because there is no political reason for them to do so, beyond mollifying a handful of outside critics. None of those responsible for the upkeep of the kafala system – without which these countries couldn’t function as they do – has any incentive to improve it. Nor do they face sanctions if they don’t.

In September last year, a reporter for The Guardian succeeded in speaking to some of the migrant workers in Dubai about their lives. “It has been over a year since I was able to send any money home. Because I am starving, I can’t send anything,” one 39-year-old Pakistani man who hadn’t been paid in 10 months told her. “We are sick and tired of this place, and we want to escape. But I can’t go back with nothing.” For as long as the kafala system survives, there will be an endless stream of similarly heartbreaking tales.

I am not anticipating that the UAE or any of its neighbors will resemble anything like a liberal democracy in the coming years. Nor do I think that democratic reform should be a condition for diplomatic relations with these countries, although it is striking that the American NGO Freedom House, which classifies Israel as the only “free” society in the region, gives Iran 16/100, the UAE 17/100 and Bahrain 12/100 on its latest “freedom in the world” index.

But there are certain state-enabled crimes that are so monstrous that they are not compatible with membership of the civilized world. Genocide is one of those crimes; slavery, I would argue, is another. And whether we like it or not, the truth remains: Slavery is alive and well in those Arab states that have made their peace with Israel, just as it is in those Arab states that are slated to make peace with the Jewish state in the near future.