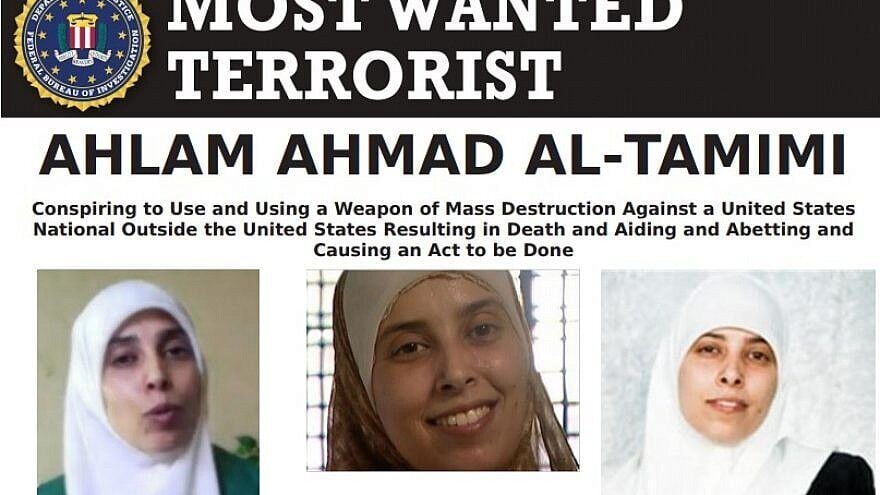 An FBI “Most Wanted Terrorist” poster for Palestinian terrorist Ahlam Ahmad Tamimi, one of the masterminds of the Aug. 9, 2001 bombing of the Sbarro pizzeria in Jerusalem that led to the deaths of 15 civilians, two of them Americans.

truisms. For example, that Jordan is both a friend of the West and a vital, respected component of the Arab world at the same time.

Or that Jordan’s peace treaty with Israel in 1994 has helped save the region from an all-out war in the face of global Islamist terrorism and Iranian expansionism. Or that the overthrow of the ruling family – in situ since the early part of the 20th century, thanks to its alliance with the British Empire – would be a catastrophe for the country and for the cause of moderation in the region, with immediate shattering effects in the West Bank to boot.

I don’t intend to dispute any of those claims here. On the contrary, by taking them at face value, we are afforded a glimpse of the rank hypocrisy exhibited by Jordan and its defenders when it comes to the kingdom’s continued harboring of two brutal terrorists who are subject of foreign arrest warrants. Their separate missions, 19 years apart, were to kill unarmed Jews dining in kosher restaurants – in both cases, unfortunately, meeting with success.

Of the two terrorists in the frame, one is better known (relatively speaking), while the second may find himself the subject of renewed attention now that his partner has been arrested by counterterrorism police in Norway.

The first is Ahlam Tamimi, a Hamas terrorist and resident of Amman, Jordan’s capital, who has been the subject of a U.S. Department of Justice arrest warrant since 2016. On Aug. 9, 2001, Tamimi orchestrated the suicide bombing of the Sbarro pizza restaurant in downtown Jerusalem that claimed the lives of 15 people. Tamimi deliberately targeted the pizzeria during the lunchtime rush, where it tends to be filled with parents and children, causing more than 100 wounded in the attack as well.

Arrested by the Israeli security forces and sentenced to 16 consecutive terms of life imprisonment, Tamimi served just eight years. She was then released, along with more than 1,000 other convicted Palestinian terrorists, in the 2011 deal between Israel and Hamas that secured the freedom of Gilad Shalit, an Israel Defense Forces’ soldier who had been held captive for years in the Gaza Strip.

For nearly a decade, she has lived openly in Amman, where she has become something of a media personality who enjoys reminding her audience of her role in the bombing. Jordan happily tolerates this, rebuffing an American attempt to extradite her in 2017 by disingenuously claiming that a bilateral extradition treaty that was agreed with the United States more than 20 years earlier had expired.

The American understanding is the treaty remains in force, and that justice for U.S. citizens murdered in terrorist attacks is of the highest priority. Still, the Jordanians continue thumbing their noses in Washington’s direction in the case of Tamimi.

As for the other terrorist, Nizar Tawfiq Mussa Hamada, the offended party is France. Hamada was one of two armed Palestinian terrorists belonging to the shadowy Abu Nidal Organization who sprayed the crowded dining tables at Chez Jo Goldenberg, a kosher restaurant in Paris, with machine gun bullets, murdering six people and wounding more than 20 on Aug. 9, 1982, eerily, the same date as the Sbarro attack 19 years later.

Both Hamada and his fellow gunman, Walid Abdulrahman Abu Zayed, fled the massacre scene into the warren of streets in the Marais, the old Jewish quarter of Paris, and have evaded French justice ever since.

Yet some progress was finally made five years ago, when two former members of the Abu Nidal Organization turned over key information to the French intelligence services, including the whereabouts of the Goldenberg killers. Abu Zayed was revealed to be living in Norway, having obtained citizenship there under the false name “Sohail Othman,” while Hamada was in Jordan.

Disgracefully, Norway turned down a French request to extradite Abu Zayed in 2015. At long last, the Norwegian authorities arrested him last week and are now expected to grant the French request –

filed immediately they learned of his detention – for Abu Zayed’s extradition.

Hardly the same can be said for Hamada in Jordan. In May 2019, a second French request for Hamada’s extradition was (to quote the satisfied words of his lawyer) “categorically refused.” The reason given was the same for the first Jordanian refusal, in 2016, to send Hamada to France: Its 30-year limitation period for a crime to be penalized had elapsed. That same reason applied in the Jordanian refusal to extradite a third person in the Goldenberg case: The reputed mastermind of the attack, Souhair Mouhamed Hassan Khalid al-Abassi, aka Amjad Atta, who also happens to be a Jordanian citizen.

With Norway finally behaving responsibly in Abu Zayed’s case, there is even more reason to pressure the Jordanians to follow suit in the cases of Hamada as well as al-Abassi, his alleged boss, and Tamimi. That pressure must now be applied.

Both the United States and France should support each other in making the diplomatic and legal case for the immediate extradition of these terrorists. If Jordan refuses to comply, then coercive measures, including targeted sanctions upon individuals actively preventing extradition or otherwise aiding the terrorists, should be introduced.

That is the least that the victims of these two horrendous massacres are owed by the world community, particularly when one factors in the consideration that had the terrorists targeted non-kosher establishments with non-Jewish victims, Jordan would likely have been cooperative.

A Franco-American initiative would also be a welcome reminder that the Western alliance remains intact, despite the frayed political ties of recent years. Until that happens, Jordan’s hypocrisy will continue to be indulged.