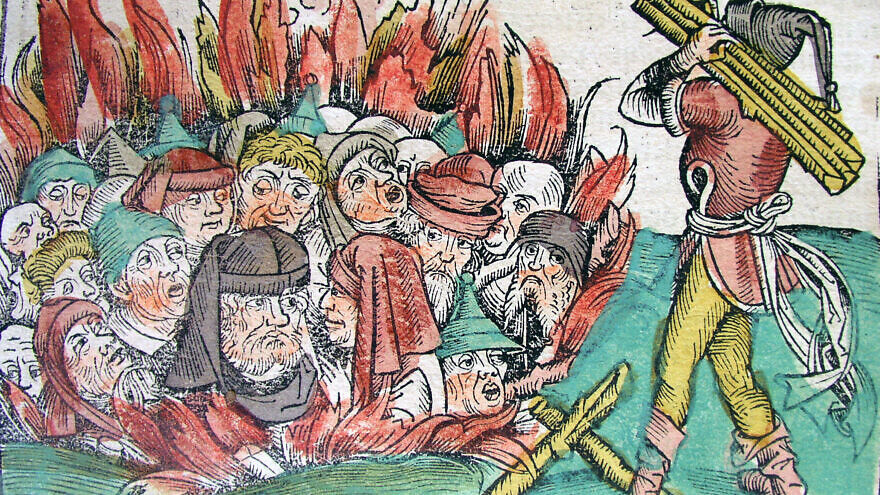 The “burning of the Jews” depiction during Europe’s Black Death plague.

A sad sight has returned to the streets of New York– and doubtless, to other cities around the country in which a growing majority of residents have vaccinated themselves from COVID-19. People are wearing masks again inside residential and office buildings, in grocery stores and even outdoors in the heavy summer air.

I can only share impressions at this stage, but the atmosphere seems a little more relaxed than in 2020 when the absence of a vaccine meant that mask-wearing, however unpleasant, was a public-health requirement. At a bustling store I visited last week in Manhattan, I observed that approximately half the people there were properly masked, another third wore their masks dangled around their chins, and the remainder weren’t bothering at all. Happily, no one was yelling at anyone else about it.

If they are vaccinated, then they shouldn’t really need to mask. Of all the pandemic-related data that has surfaced in recent weeks, three conclusions stand out. First, that the vaccine has been phenomenally effective in those communities and localities where its availability has been embraced. Second, that the chance of a virus breakthrough in a fully vaccinated individual is extremely rare. Third, that the main reason for the continued spread and mutation of the pandemic, at least in the United States and in other Western countries where coronavirus vaccines are in plentiful supply, is the refusal of a significant minority of the public to do their civic and human duty by taking the jab.

It’s important not to portray opposition to the vaccine as an intellectually or morally legitimate opinion in the debate over how to comprehensively defeat the worst public-health crisis in a century. Simply, there are no “points of view” when it comes to vaccination. In support of vaccination, there is already a copious body of empirically verified evidence that continues to accumulate further scientifically valid insights, as researchers discover more about the variants of the virus. That sits alongside the dismal fact that unvaccinated individuals composed nearly 100% of COVID-19 hospital admissions nationally within the last month. Unsurprisingly, over on the vaccine refusal side, we find only a morass of superstition and paranoia rooted in conspiracy theories, ill-founded rumors and plain old misinformation.

All that being said, a Jewish audience doesn’t need much persuading of either the effectiveness of the vaccine or the myriad dangers posed by vaccine refusal, at least if a survey conducted by the Public Religion Research Institute at the end of July is anything to go by. Among its findings were that 85% of American Jews are either fully vaccinated or nearly there, and that more than 70% of the community “supports requiring proof of vaccines for activities like travel, work or school.” And, of course, in terms of speedy delivery of vaccines to its citizens, the State of Israel really did the lead the way, in full view of the rest of the world.

The introduction of vaccine passports, along with financial incentives (commonly known as bribes) to get vaccinated, may well leave a big dent in the vaccine refusal movement, as some of its adherents opt for the pragmatic approach to avoid their lives getting even harder. Media intervention is critical as well. A peer-reviewed study in May of COVID-19 vaccine rumors and conspiracy theories by a group of medical specialists discovered no less than 578 unsubstantiated rumors concerning the vaccine that had traveled across social media (“36% were related to vaccine development, availability and access; 20% related to morbidity and mortality; 8% to safety, efficacy and acceptance; and the rest were other categories,” noted the study, appropriately titled, “The need for cognitive inoculation against misinformation to improve vaccine adherence.”) It went on to argue that “tracking COVID-19 vaccine misinformation in real-time and engaging with social media to disseminate correct information could help safeguard the public against misinformation,” an approach that would also help to break down vaccine refusal.

While we can be reasonably confident that, with the passage of time, more vaccine refusers will relent in the face of the health crisis they helped make much worse, we can be less confident the hateful beliefs currently being spread among their ranks will follow suit.

As someone who writes regularly about global antisemitism, I’ve noticed that bigotry directed toward Jews as a result of the pandemic is a rapidly growing part of my workload. Essentially, it has taken two forms. To begin with, there is the nauseating use of the “Judenstern,” the yellow “Jews’ Star” the Nazis forced Jews to wear on their outer clothing, with the word “Jew” replaced by “Not Vaccinated.” This visual appropriation of Nazi genocidal policies toward Jews as an analog for the social difficulties that vaccine refusers are bringing upon themselves has been alarmingly widespread – so much so that in June, the city of Munich banned the display of the “Judenstern” from the vaccine-refusal demonstrations that have proven chillingly popular in Germany. Only last week, flyers bearing exactly this imagery were distributed on Manhattan’s Upper East Side.

Then there is the comparatively even less subtle rumor mill insisting Jewish business moguls are getting fat off vaccine profits. A study conducted in June by a group of academics at the University of San Martin in Argentina revealed more than 30% of Argentines strongly agreed with the statement that there are “laboratories of Jewish businessmen who seek to profit financially” from the vaccine with another 7% concurring with that statement to a lesser extent.

It would be comforting to believe that in a few months, with a fresh wave of vaccinations in place, these calumnies will have faded from view. While it is reasonable to think a decline in vaccine refusal will similarly impact pandemic-related antisemitic propaganda, these beliefs will always find a ready audience within the hardcore of remaining vaccine refusers, whose rhetoric will become even more violent and apocalyptic.

Some medical experts argue that like influenza, the coronavirus will never truly leave us; only the degree of vaccination will determine whether the virus controls us or we control the virus. Similarly, the antisemitism whipped up during the pandemic, with its echo of the medieval slander that Jews spread the Black Death by poisoning wells, will also remain with us. How serious it becomes will depend on many factors, chiefly how the divide between the vaccinated and the unvaccinated plays out in the political realm.

In the meantime, Jewish organizations should be devoting more resources to studying and combating pandemic-related antisemitism. When the boycott, divestment and sanctions movement targeting the State of Israel’s sovereign existence emerged in the early 2000s, some Jewish leaders argued, mainly in private, that depriving it of the oxygen of publicity was the best way to defeat it. Two decades later, the acronym “BDS” is still with us, albeit with a litany of failures and only a handful of successes to its name.

Whatever progress is made by the antisemitism of the virus, let’s not make that same mistake again.