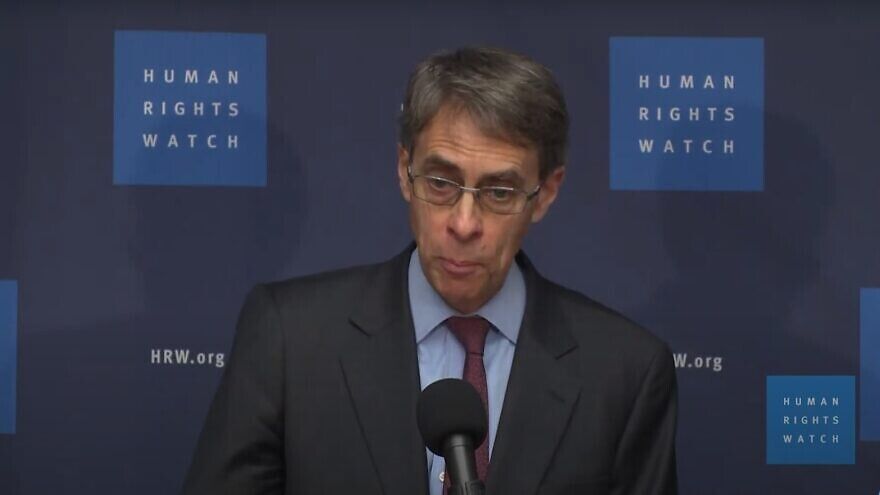 One of the more reprehensible aspects of the global campaign to strip Israel of its legitimacy is the fact that so many leading human-rights organizations have been co-opted by it.

Under the cover of concern about Israeli policies toward Palestinians in the West Bank and Gaza Strip, groups like Amnesty International, Human Rights Watch and Oxfam have recast Israel as a rogue state that is founded upon Jewish supremacy, apartheid legislation and land-grabbing.

All of these organizations will point out in response that these are not their “official” views. Yet, these same views have become so embedded in the numerous condemnatory reports and statements about Israel they’ve collectively issued over the last 20 years that the distinction is an academic one.

In the process, these three organizations – and many others in the human-rights world – earned the enmity of the grassroots communities of pro-Israel activists that cemented over a similar period of time. From the U.N.’s Durban Conference on racism in 2001 to the coronavirus in 2020 via the 2009 war in Gaza, pro-Israel activists and Jewish advocates have been forced to confront the crudest forms of anti-Semitism either in outright opposition to the human-rights establishment or, more mildly, without their sympathy, support or even interest.

Even so, in countless significant ways, the pro-Israel community has prevailed against the current. To take one example, the so-called boycott, divestment and sanctions campaign to subject Israel to permanent social distancing has run afoul of legislators in more than half the states in America. Another example is the adoption by dozens of countries and hundreds of international organizations, among them the U.S. government, of the International Holocaust Remembrance Alliance definition of anti-Semitism. This sets out how anti-Semitic attitudes and policies can manifest in many different ways, among them through attacks on Israel’s right to exist or the lurid comparisons between Israel’s armed forces and those of Nazi Germany.

It stands to reason that many pro-Israel advocates and campaigners against anti-Semitism will give a spirited welcome to the news, reported last week by Politico, that U.S. Secretary of State Mike Pompeo is backing a process that will designate certain NGOs as “anti-Semitic.” The designation will apparently be grounded upon the IHRA definition, which, as Politico acknowledged, can be interpreted to mean “that groups that support the Boycott, Divestment and Sanctions movement should be declared anti-Semitic.”

What would such a designation mean in practical terms? The details are sketchy. According to Politico once again, which first reported on this issue three weeks ago in the expectation of an imminent declaration from Pompeo that has not thus far been made, a designation policy on anti-Semitism would take its cue from “a report from the office of Elan Carr, the U.S. special envoy to monitor and combat anti-Semitism. The report would mention organizations including Oxfam, Human Rights Watch and Amnesty International. It would declare that it is U.S. policy not to support such groups, including financially, and urge other governments to cease their support.”

If this reporting is accurate, then what is being proposed involves a two-pronged attack: upon an organization’s reputation by stigmatizing it as “anti-Semitic,” and by undermining its attempts to raise funds from government sources. Quite how far an organization would have to go to earn an anti-Semitism designation is not specified, but it’s probably safe to assume that the kinds of statements and actions undertaken by Amnesty, Human Rights Watch and Oxfam during 2014’s “Operation Protective Edge” – false accusations of Israeli war crimes, counting Hamas terrorists among civilian war deaths, analogizing Gaza’s predicament with the Jewish ghetto in Nazi-occupied Warsaw – would be sufficient.

For the organizations concerned, the potential impact of such a policy being implemented is enormous. Oxfam, for example, receives about 25% of its annual $700 million budget from the British government and local authorities. Should the U.S. State Department deem Oxfam to be “anti-Semitic,” the charity’s supporters will doubtless express their fears that the British government will cave in to American and “Zionist” pressure to cut funding.

But such an outcome is highly unlikely, however fervently the anti-Semitic conspiracy theorists might believe otherwise—and paradoxically, that causes me to wonder how effective a designation of anti-Semitism would actually be. That is a different question to whether an organization deserves such a designation in a moral sense.

The current political situation makes it all the more pertinent. Present realities would suggest two possible fates for a designation policy, neither of them particularly dignified. Firstly, President Donald Trump’s inevitable exit from office means that the foreign ministries of other countries can more easily dismiss such a policy as an exotic hangover from his administration, and therefore not something they should worry about after January 2021. Secondly, whomever President-elect Joe Biden picks to run the State Department, it’s unlikely to be someone sympathetic to the previous administration designating a large segment of the human-rights establishment as anti-Semitic – meaning that the policy will be discarded outright or simply left to gather dust.

In practical terms, then, to announce such a policy during the twilight of the Trump administration is perhaps condemning it to an undeserved fate. Undeserved, because the basic idea underlying the policy is a sound one – that trafficking in anti-Semitic canards should not be permitted to hide behind noble labels such as freedom of speech, and nor should doing so leave offenders free from the material consequences of their actions. That is a courageous position to take.

Can this principle be incorporated into a Democratic administration’s policy on countering anti-Semitism? At some point, it will need such a policy, if only because combating hatred and discrimination against Jews is part of the State Department’s mission, and it is one moreover that has bipartisan support. After all, it was a Democratic administration that created the Special Envoy for Holocaust Issues in 1999 and a Republican one that created the Special Envoy on Anti-Semitism in 2005.

In that same bipartisan spirit, the incoming administration should resist the temptation to sweep away everything undertaken by its predecessor. An official designation can be a vital tool in holding to account civic, academic and humanitarian organizations that receive public funds in the event they spread anti-Semitic canards. For the principle that taxpayers shouldn’t fund organizations that engage in anti-Semitism is one that everyone involved in the fight against it can embrace.