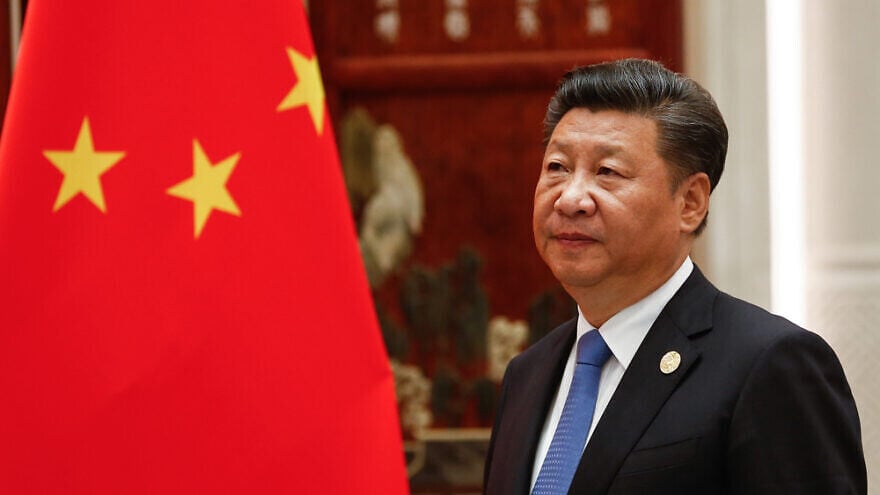 President of the People's Republic of China, Xi Jinping.

Nearly 80 years after it was first published, and more than 30 years after its muse, the Soviet Union, disappeared from the political map, George Orwell’s novel “1984” remains depressingly relevant.

That maxim has been unmistakably on view in Russia and China in recent days, where those in control of the present have driven a bulldozer through the recent past in a blatant attempt to obliterate the historical record of democratic struggles in both nations – and all in the service of a decidedly non-democratic future.

On Dec. 22, 2021, the authorities at Hong Kong University erected barriers and sheeting around the Pillar of Shame, a statue commemorating the 1989 massacre of protesting students in Beijing’s Tiananmen Square, before workers dismantled the structure and removed it from the campus.

Created by the Danish sculptor Jens Galschiøt, the Pillar of Shame had stood on the campus since 1997, the year Britain returned Hong Kong to Chinese rule. It featured 50 anguished faces and tortured bodies piled on top of one another in a deeply unsettling reminder of the slaughter ordered by the Chinese Communist Party in October 1989, when, in classic fashion, it turned the army’s tanks on the unarmed student demonstrators gathered at Tiananmen Square in the heart of the capital.

In a statement justifying the removal, HKU said its decision to banish what it derided as “the aged statue” was based on “external legal advice and risk assessment for the best interest of the university” – a polite way of saying it had bowed to the CCP’s political intimidation. Like clockwork, the following day two more universities in Hong Kong announced they were removing artwork commemorating the 1989 massacre. Following its removal of a statue by the Chinese dissident artist Chen Weiming, the Lingnan University of Hong Kong announced in a similarly oblique manner it had acted after having “reviewed and assessed items on campus that may pose legal and safety risks to the university community.”

In Russia, meanwhile, President Vladimir Putin’s regime ordered the closure of the country’s oldest human rights group, Memorial. Founded during the last period of Communist Party rule in the late 1980s, the group is dedicated to researching and exposing political repression in present day Russia as well as documenting the crimes of the Soviet era. A Dec. 28, 2021 decision of the Russian Supreme Court dissolved Memorial on the grounds it had violated the country’s draconian foreign agents’ law, which is frequently invoked to shut down dissident opinion.

The main founder of Memorial was Andrei Sakharov, the eminent Soviet nuclear physicist who became the USSR’s most high-profile dissident. Natan Sharansky – the Soviet Jewish political prisoner who worked as Sakharov’s translator – reflected in a 1990 article that after having provided the Soviet Union with the hydrogen bomb, Sakharov went on to activate “a still more powerful weapon, which ultimately destroyed the empire – he began openly expressing his beliefs, exercising the moral power of a free man. He demonstrated that no matter how totalitarian a regime, an individual can declare support for those who are suffering, and gradually challenge the norms of an entire society. Sakharov, almost alone, created the moral climate that has undermined the Soviet regime.”

Like Memorial, and like the commemorative statues dismantled and destroyed by China, the empowering “moral climate” that once looked like consigning communist rule to history has itself become part of a past the authorities in Moscow and Beijing are determined to rewrite. What was widely regarded in the west as the forward march of democracy was seen, in these capitals, as a series of insults to national honor. The Soviet Union was dismantled, Chinese influence was limited, Western military power asserted itself first in the Balkans, Russia’s backyard, and then the Middle East, leaving Russian and Chinese military planners to look wistfully backwards.

Over the last 20 years, however, the balance has shifted: Western countries don’t want to fight foreign wars anymore, which means both Putin and Chinese President Xi Jinping, whose power bases are rooted in their military and intelligence establishments, have greater leeway in repressing dissent domestically and projecting their power externally. In the Russian case, the focus is on Ukraine, while for China, the targets are Taiwan and whatever remnants of a democratic order remain in Hong Kong.

Russia and China’s leaders need to bury those elements of the past that saw democratic activism challenge and overcome one-party rule, in order to revive exactly those policies of repression, immiseration and outside aggression that led to those protests in the first place. Both countries are in the grips of grandiose projects of political transformation directed from above. For Putin, the goal is the reversal of what he once called the “greatest political catastrophe” of the previous century; the demise of the USSR.

For China, the watchword is “Sinicization” – Xi’s term for imposing on all of his country’s various elements, especially its national and religious minorities, supreme loyalty to Chinese culture and the CCP. The brutal implications of that policy have already been witnessed in the Xinjiang region in the northwest, where up to 2 million members of the Muslim Uighur minority have been incarcerated in prison camps, and they are now creeping into other areas. “Xi was the elephant in the room,” a Catholic priest from Hong Kong told Reuters following an anxious private meeting with Catholic clergy from mainland China at the end of October. “We all know the word ‘Sinicization’ carries a political agenda behind it, and they didn’t have to spell that out.”

Winston Smith’s insight that the control of the past is a necessary condition for control of the future is confirmed in nearly every action these regimes undertake. And as faith in democracy as the most preferable of political systems declines in the West, the ideological fusion in the east of communism, nationalism and faith in the state is enjoying a renaissance.

The response of the U.S. and other Western governments has been to engage in aggressive diplomacy and threaten ostensibly punishing financial measures, such as cutting off access to the SWIFT international payments system. There are many reasons to fear that those actions will not sway either Russia or China from their current paths, and many indications that if they fail, our leaders will have little stomach for a deeper confrontation.

Ben Cohen is a New York City-based journalist and author who writes a weekly column on Jewish and international affairs for JNS. To read more of Cohen’s columns, visit cjn.org/cohen.