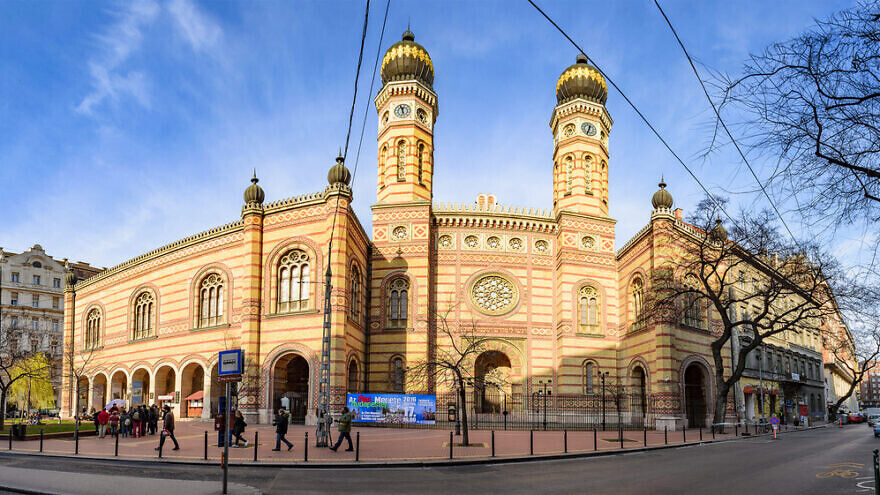 Is it possible for a country to be the locus of widespread antipathy toward Jews while simultaneously maintaining relatively low levels of antisemitic hate crime? A newly published report by the Jewish community in Hungary demonstrates that it is.

Reading the report published by Maszihisz, which represents the 100,000-strong Jewish community in Hungary, I was struck by how it echoed an observation of George Orwell’s regarding antisemitism in Britain in the immediate aftermath of World War II. Jew-hatred there, Orwell wrote, did “not take violent forms (English people are almost invariably gentle and law-abiding), but it is ill-natured enough, and in favorable circumstances it could have political results.”

I will not make any similar comment about the general disposition of Hungarians, if one is even possible, but it is true that even though one in three Hungarians dislikes Jews to some degree, they do not engage in violent assaults, verbal abuse or anti-Semitic vandalism at any level that is comparable with western Europe. But that doesn’t mean, following Orwell, that we shouldn’t be concerned about the political effects of this prejudice.

Data gathered by Maszihisz recorded 53 antisemitic incidents in 2019 and 70 in 2020. Only one of these incidents involved a physical assault. Now, while it is a precious truth that one hate crime is one too many, Hungary’s nationalist government can’t be faulted for making hay out of the fact that theirs is one of the few countries in Europe with a significant Jewish population that is disturbed by anti-Semitic violence only rarely.

Compare Hungary with Germany, which has a slightly larger Jewish population of 120,000. In 2019, the German authorities recorded 1,839 anti-Semitic attacks – a record number at that point in time, including 72 violent crimes.

If it was difficult in 2019 not to reflect on the bitter irony of postwar Germany becoming the location of at least five antisemitic offenses on a daily basis – that was even more the case in 2020, when the record of anti-Semitic outrages peaked again. During a year defined by the coronavirus lockdowns, Germany still recorded 2,275 anti-Semitic crimes. Due to people sheltered at home, the number of violent assaults was down – 55 in 2020 – but that still amounted to at least one physical attack on a Jew every week at the hands of either Muslim extremists or neo-Nazis or the occasional leftist.

Given the situation in Germany and a similar one in France, along with the presence of a vocal anti-Zionist campaign on the far-left and the increasing boldness of the far-right in nations across Western Europe, why worry about Hungary?

There are those, foremost among them the Hungarian government of Prime Minister Viktor Orbán, who say that we shouldn’t. Why would we, they ask, when Jews can walk safely to synagogue in Budapest, instead of peering anxiously over their shoulders when doing the same in Paris or Vienna? Why would Hungary – a country with a consistent record of support for the State of Israel to boot – be regarded as a land unfriendly to Jews?

These are good questions, and it is certainly the case that of all the manifestations that antisemitism can take, violence is the most serious threat of all. But there is another layer to the problem that is composed of historical memory and ingrained prejudices absorbed across centuries. “Antisemitism is present across the whole of Hungarian society, and we have to combat this phenomenon,” Andras Heisler, the head of Maszihisz, told the Budapest Times last week.

This is the sort of antisemitism that one catches at the end of a remark, the kind that discreetly ostracizes those Jews who identify as Jews from social interactions. To illustrate how these attitudes can affect Hungarian Jews, Heisler explained that the first bat mitzvah ceremony at the recently renovated Rumbach Street Synagogue in Budapest, involving a group of 12 girls, was held recently. The parents of the girls turned down a request for the occasion to be captured on video out of “fear of what would happen if their colleagues, neighbors and acquaintances found out they are Jews,” Heisler said.

The data in the Maszihisz report bears these concerns out. Conspiracy theories abound in Hungary, and fabrications on social media about wealthy Jews – particularly, the liberal Hungarian Jewish billionaire George Soros, who is public enemy for Viktor Orbán – are eagerly lapped up. In the local media, the journalist and commentator Zsolt Bayer is a loudly anti-Semitic voice with a large audience and excellent political connections. A founder with Orbán of the ruling Fidesz Party, Bayer received one of Hungary’s highest awards, the Order of Merit of the Knight’s Cross, at the prime minister’s behest in 2016.

In one episode of Bayer’s radio show last year, the coronavirus pandemic was depicted as a global Jewish conspiracy through the obscene language he has is known for (Bayer has previously said that Roma Gypsies “are unfit to live among people” and referred to Black people in a 2020 magazine article using the “N” word.) “The Jews are the source of our troubles,” Bayer said on the show, echoing the infamous Nazi slogan that the Jews “are our misfortune.” He elaborated on this point by claiming that the coronavirus was engineered by Jews as a pretext to impose “martial law” on the entire globe.

Polling that accompanied the Maszihisz report revealed that 20% of Hungarians held views that were “strongly antisemitic,” while a further 16% were described as “moderately antisemitic.” These figures were consistent with previous years, the pollster observed, while the remaining 64% of the population “show no antisemitic attitudes at all.” Additionally, the analysis accompanying the poll emphasized that Hungarians tend not to make antisemitic comments unprompted, but will nonetheless agree with a range of antisemitic statements that are put to them.

The legacy of World War II is also important. In common with other countries in Eastern Europe, Hungary is actively revising its account of World War II to minimize the extent of local collaboration with the Nazis in the extermination of Hungary’s 500,000 Jews, who were deported en masse late in 1944. The Maszihisz report observed that a large proportion of Hungarians were fed up with Holocaust remembrance, noting with worry “the increasing prevalence of Holocaust denial and relativization (the former is common to roughly one in 10 respondents, the latter to about one in five respondents).”

Whether the discourse will eventually turn to violence remains an open question. It’s worth remembering that antisemitism in the United States was primarily rhetorical and attitudinal until quite recently; only since the Tree of Life Synagogue shooting in Pittsburgh in 2018 has the threat of violence become a central part of the problem. But the warning signs are always there.