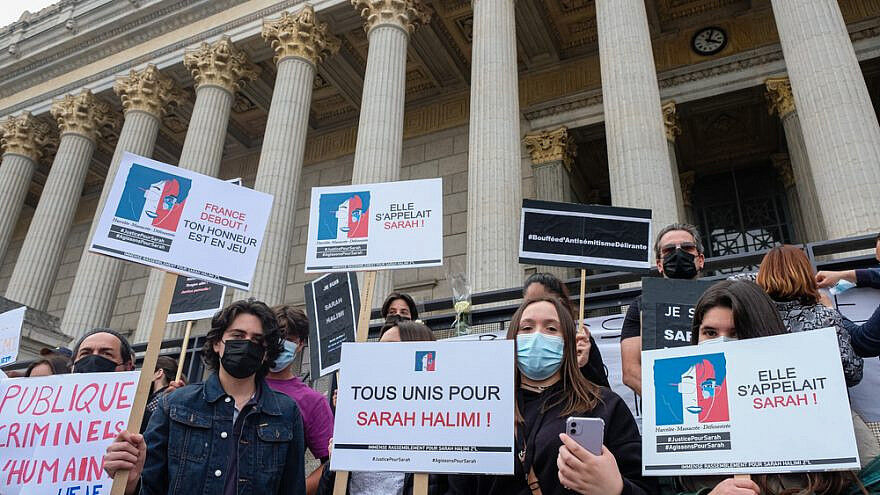 About 800 people gathered in front of the 24 columns courthouse in Lyon to demand justice for Sarah Halimi in Lyon, France. Credit:

There was a particularly nasty incident reported in the crime sections of the French press this week. It caught my eye because certain details were disturbingly reminiscent of the case of Sarah Halimi, the 65-year-old Jewish woman brutally murdered in her Paris apartment in April 2017 by her anti-Semitic neighbor who, exactly four years later, was deemed to be criminally irresponsible for his act by France’s highest court, his consumption of marijuana on the night of the killing supposedly having eliminated his self-awareness.

The incident involved a 17-year-old girl and a 21-year-old man. As with the Halimi case, it occurred in the early hours of the morning, just before dawn, in a crowded inner-city neighborhood in eastern Paris. And again, as with the Halimi case, it was the harrowing screams of the female victim that woke up many of the residents of Place Jean-Ingres in Garges-les-Gonesse, who then inundated the local police with emergency calls.

Several of these residents who looked out of their windows, some holding cellphone cameras, witnessed the man violently force the young woman to perform a sexual act. He punched and kicked his victim repeatedly, and then raped her as she lay helpless on the ground.

Thankfully, and in marked contrast to their response in the Halimi case, police officers were reportedly on the scene “within minutes” of being alerted, and they acted immediately. They overpowered the male assailant, who by this time was naked from the waist down, and rushed the victim to hospital, where she presently remains alive but in severe shock. In the Halimi case, fearing that they were dealing with an armed Islamist terrorist, the police officers who arrived at the scene dithered outside her apartment while her accused killer, Kobili Traore, continued to beat the victim to death.

The most striking overlap between the Halimi case and this one concerns the mental state of the assailant. Tests carried out by the police revealed the accused rapist had just over 0.025 fluid ounces (0.75 grams) of alcohol in his blood – a proportion that by American DUI law enforcement standards would be relatively low. Still, it was enough to indict the assailant on a charge of “rape committed by a person in a state of obvious drunkenness.”

Nothing in the media reporting of this shocking episode suggests the assailant will be able to take the path of drug-user Traore, whose chronic use of marijuana enabled him to cross the line drawn by the French penal code between intentional murder committed by the sane and unintentional murder committed by the insane. Police interviews with Traore, now 32, revealed that in his altered state, he had been “traumatized” by the sight of a menorah and Shabbat candles in Halimi’s apartment (Jewish symbols some called signs of the devil). As he beat Halimi before throwing her body out of a third-floor window, Traore screamed that she was Shaitan, Arabic for “Satan.”

Using the same logic, the accused rapist described above should be able to make the same legal case. Our client was blind drunk, his lawyers might argue, and therefore not in control of his discernement (“self-awareness”). There was something about his victim’s dress or manner that “traumatized” him, they might add, and since he consumed one too many drinks that night (remember, Traore’s mindset was allegedly transformed by one “acute delirious puff” on a marijuana joint, according to the court ruling in the Halimi case), our client cannot be held criminally responsible for the appalling sexual abuse and physical violence which he visited upon the victim, as this exact behavior was brought on by a state of alcoholic delirium.

At this point, they would offer a solemn apology to the victim’s family, just as Traoré’s lawyers did with the relatives of Sarah Halimi.

But in the wake of the Halimi travesty, there is less patience now in France with the idea that mental breakdown caused by alcohol or drug use excuses someone from a criminal trial. The French Senate has just adopted the first draft of a bill that would amend the penal code by closing down this escape route for offenders. But all that, of course, comes too late for Halimi and her family.

Traoré never has to worry about facing a criminal trial in France. At the discretion of his doctors, he will probably be discharged from psychiatric hospital sooner rather than later, having already been released from the secure psychiatric unit where he was originally held more than a year ago. So, when we hear the worthy slogan “Justice for Sarah Halimi,” we are compelled to consider whether, realistically, those words mean anything.

Justice, in the strictly legal sense of that word, has already been denied to her in France. The only other possible judicial avenues at this point are the European Court of Human Rights, which is a long shot, or putting Traore on trial in Israel under the Jewish state’s own anti-Semitism law, as some people have rather hopefully suggested; however, the French categorically don’t do extraditions.

At a recent online rally for Halimi, her son, Yonatan, delivered a stark message to French Jews. “My mother always taught us to take responsibility. … It is very difficult for us that today, the justice system, the authorities did not assume their own responsibility,” he stated, adding “each of us should guarantee his own security because, unfortunately, security in France is not assured.”

Some might interpret that last line as a call for more communal self-defense; others might hear in it a cry for more aliyah to Israel; and still others might take it as a mere statement of fact. After all, less than a year after Sarah Halimi was murdered, another Jewish woman living alone in Paris – 85-year-old Holocaust survivor Mireille Knoll – was robbed, stabbed to death and then burned by two young men who preyed on her based on the conviction that Jews, because they are rich and mean with their pennies, always have plenty of cash squirreled away in their homes.

France is in no position to guarantee another atrocity of this kind won’t happen again. Neither, frankly, is any other European country. True, because of Sarah Halimi’s terrible ordeal, it’s unlikely a future killer in France will be able to turn a drug habit into legal good fortune – and that is to be welcomed. However, as far the law is concerned, that may be all the justice there is.