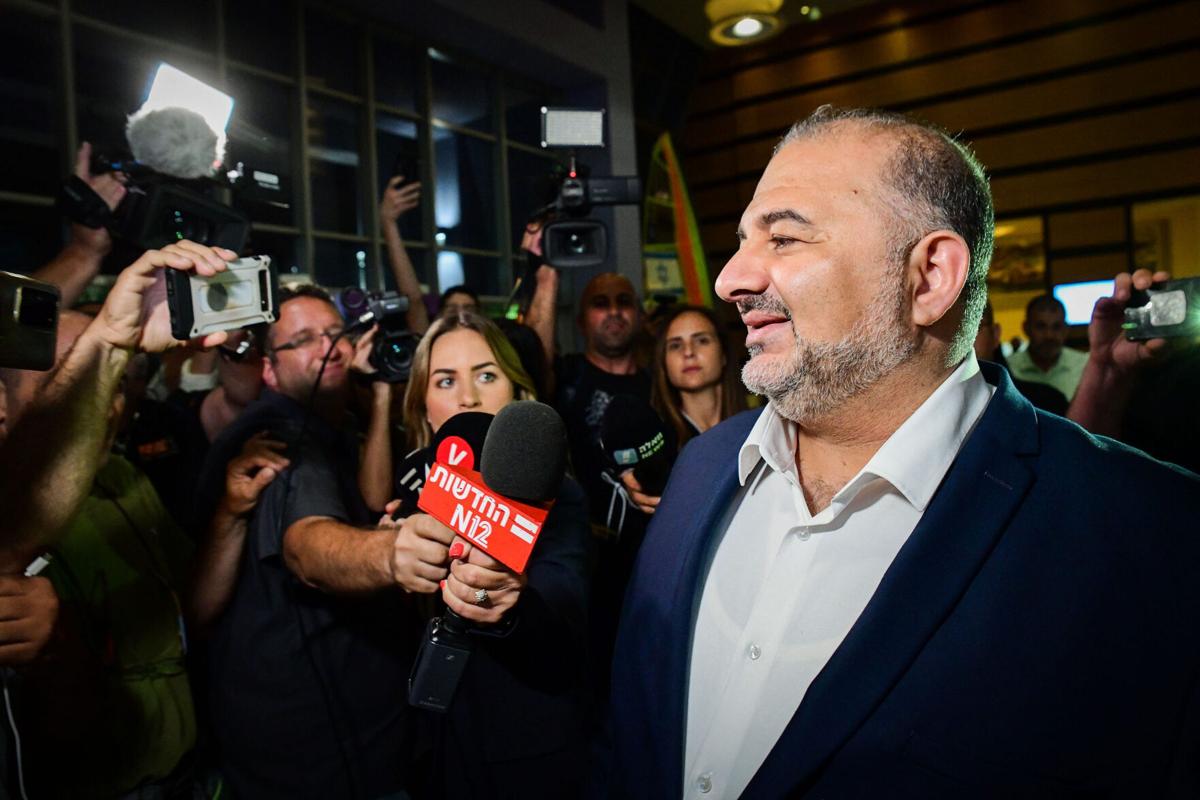 Mansour Abbas, head of the Ra’am Party, arrives for coalition talks at the Maccabiah Village in Ramat Gan on June 2, 2021.

There is a rising presence on Israel’s Hebrew-language media scene – Arabs. Arab reporters and commentators are now a more regular presence in the media here, and some of what they cover even goes beyond Arab affairs.

The prominence of Arabs in the coverage of politics has gone hand-in-hand with the prominence of an Arab political party and particularly its leader, Mansour Abbas, who became a kingmaker in Israeli politics. As unlikely as it may sound, Abbas is the leader of the United Arab List, an Islamist party that shares its origins with the now-outlawed Muslim Brotherhood in Egypt and Hamas in the Gaza Strip. But Abbas decided Israeli Arabs would never wield political power in Israel as long as their parties remained in opposition.

And in a desperate and unsuccessful bid to stay in power, Benjamin Netanyahu tried to court Abbas and the Arab electorate. In the run-up to the Knesset election in March, Abbas played his cards deftly, refusing to say whether he would throw his party’s support behind a Netanyahu-led government or an anti-Netanyahu coalition led by Naftali Bennett and Yair Lapid. When the votes were counted, Abbas’ party had four seats, without which Bennett and Lapid would not have had a majority in parliament.

The media flocked to interview Abbas after the election and hung on his every word to divine whether he would support a Bennett-led government. He did.

Arab political commentators also became a hot property. And they still are.

The most interesting career breakthrough by an Arab journalist was accomplished by Suleiman Maswadeh, a 25-year-old stateless East Jerusalem Palestinian who five years ago spoke no Hebrew and whose West Bank Arab college degree only enabled him to get a waiter’s job at Jerusalem’s David’s Citadel Hotel. But he realized that knowledge of Hebrew and an Israeli college degree were his hope for a better life.

He enrolled in a pre-academic program that included a crash course in Hebrew. He got a degree from Hadassah Academic College and landed a job reporting (in fluent Hebrew) for Israel’s public television’s news department. His current beat as the station’s Jerusalem-affairs reporter has him covering stories well beyond Palestinian neighborhoods, including the city’s large ultra-Orthodox community.

What I find especially encouraging is that the shift I describe seemed to have happened seamlessly. Arab political influence in Israel is now an established fact, and Arab political issues – particularly the shocking extent of Arab-on-Arab crime in the country – are a regular topic of news coverage.

But this is just one promising part of a larger picture that gives some reason for concern. In May, during the fighting between Israel and Hamas and its allies in Gaza, violence erupted between Arabs and Jews inside Israel itself – notably in cities such as Acre and Lod, which have a mixed Jewish-Arab population. The violence, some of which may have been stirred up by agitators from outside these cities, resulted in the deaths of two Jews and two Arabs. Things have calmed down since, but the burst of violence is a reminder that all is not rosy in relations between Israel and its Arab citizens.

The violence also seems to rebut the idea that real coexistence between Israel’s Arabs and Jews requires us to get to know one another. On the surface, it was precisely in towns where Jews and Arabs live in close proximity that the violence was at its worst.

Arabs are much more integrated into the mainstream of Israeli society than when I arrived in Israel in 1999, but a lot more remains to be done.

Cliff Savren is a former Clevelander who covers the Middle East for the Cleveland Jewish News from Ra’anana, Israel. He is an editor at Haaretz.