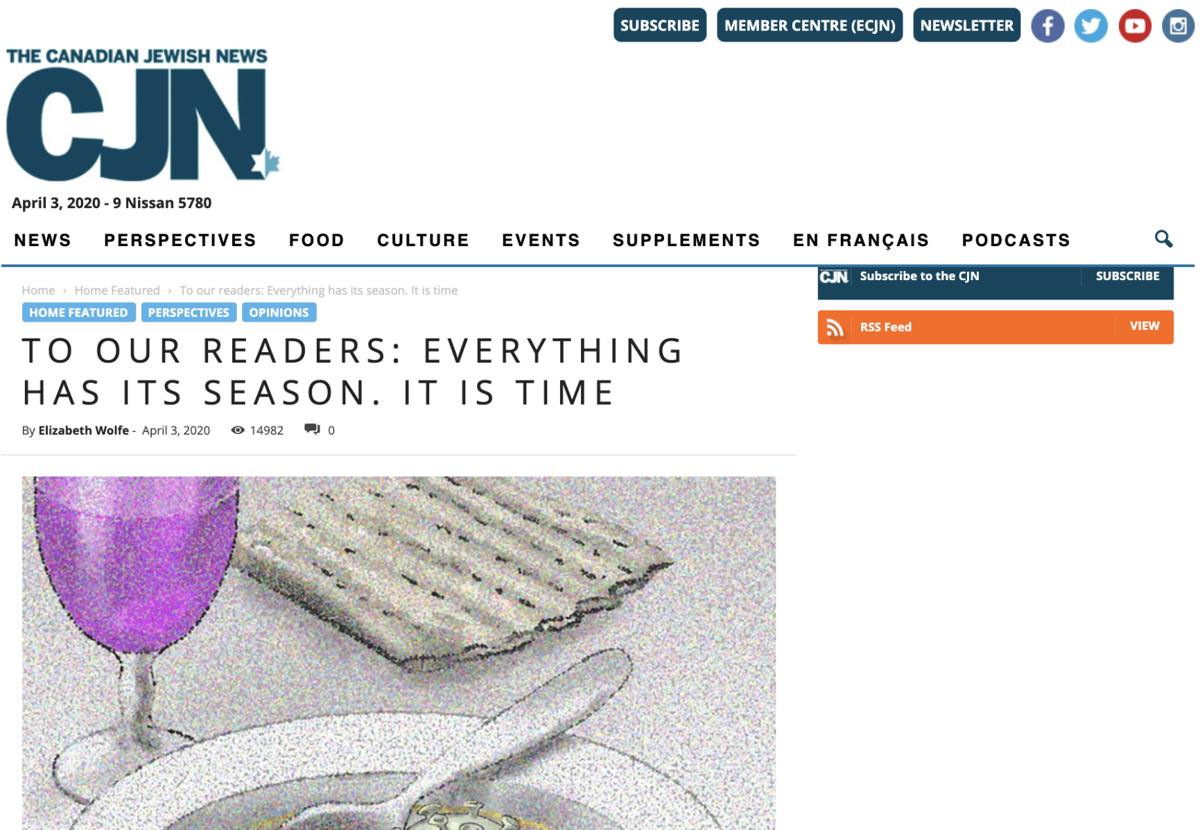 The Canadian Jewish News posted a farewell statement on its website April 3.

Call me old fashioned. There is something about a printed newspaper that reflects the place and time in which it was produced, and that will never be captured quite as well in 50 or 100 years by looking at archived online internet articles about a historical event – such as the coronavirus pandemic of 2020. It will still be best reflected in the printed newspapers of the time, which will show researchers how normal life came to a halt – how there were still television listings in the paper, for example, but no movie listings, because the movie theaters were closed.

The COVID-19 pandemic has also highlighted the importance of being well informed at a time when it could save your life, and when relying on random information on social media or shared emails could be life threatening. There was a widely shared crazy email circulating at the beginning of the pandemic, purportedly from a board member at a hospital, who claimed that an easy way to diagnose the coronavirus was to hold your breath in the morning for more than 10 seconds: “If you complete it successfully without coughing, without discomfort, stiffness or tightness, etc., it proves there is no fibrosis in the lungs, basically indicates no infection,” the message read.

I don’t think anyone would lend that credence now because the mainstream media have educated the public on the issue. But quality news coverage cannot be sustained for free.

Print journalism has been particularly hard hit now by a drop in advertising revenue. Jewish newspapers, which offer content that is simply unavailable from the general mainstream press, are no exception, despite the key role that they play in sustaining Jewish life.

The COVID-19 crisis pushed the Canadian Jewish News, which served a Jewish community of 400,000 people, out of business. Two Canadian Jewish websites that have sprung up are unlikely to fill the void. The pandemic also left the London Jewish Chronicle, which has been published continuously since 1841, on the brink of extinction in April, although it has since been saved.

Just after the election of President Donald Trump, Yale University professor Timothy Snyder wrote a highly impressive little book called, “On Tyranny: Twenty Lessons from the 20th Century,” which spoke about the importance of vigilance in protecting – and supporting – democratic institutions, including the importance of paying for a newspaper subscription. Since then, I have become a paid subscriber to several newspapers – an online subscriber, I might add.

The realist in me knows the future of the newspaper business is largely online, and that’s fine, as long as people make the commitment to pay for online content. They are also indirectly supporting print versions of the same content in the process. Print and online newspapers are essential to a healthy democracy – informing members of the public of what is going on around them, exposing government wrongdoing and providing a forum where issues can be debated.

Fortunately, the Cleveland and Columbus Jewish News has not suffered the fate of the Canadian Jewish News. Most independent newspapers, including Jewish ones, cannot survive unless they are supported by subscription revenue.

Over the past 15 years, more than one in five newspapers in the United States has closed, diminishing the communities that they used to serve. A newspaper subscription is not a retail purchase like a box of cereal. It is an investment in the community, but sometimes that only becomes apparent when it’s too late.

Cliff Savren is a former Clevelander who covers the Middle East for the CJN from Ra’anana, Israel. To read more of Savren’s columns, visit cjn.org/savren.