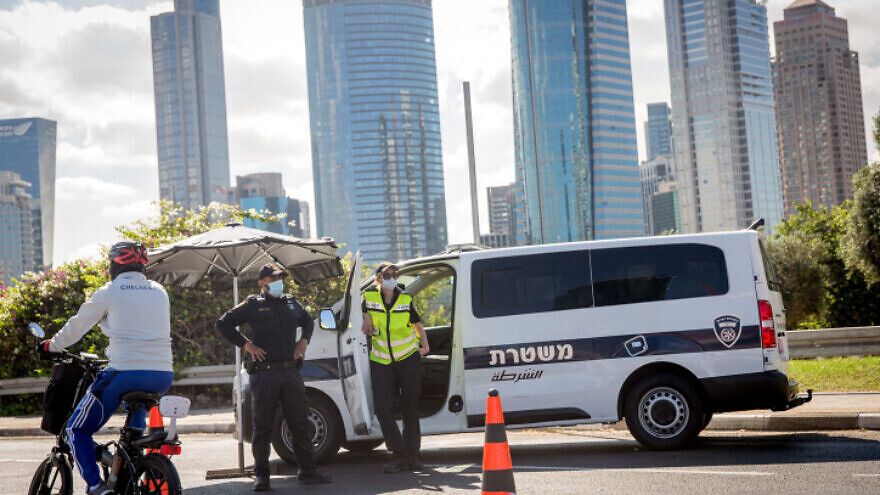 Police at a roadblock in central Tel Aviv, during Israel's second nationwide COVID-19 lockdown, on Oct. 13, 2020.

Israel is gradually emerging from its second COVID-19 lockdown,

imposed after things began spiraling out of control here. The lockdown has brought the rate of infection down substantially and things are now being allowed to open up slowly. Schools remain closed, although preschools have been allowed to open.

Israel’s public health system has proven its excellence for the most part in dealing with the crisis, but the pandemic has also highlighted longstanding divisions between Israeli society as a whole and the country’s ultra-Orthodox community. The community constitutes 13% of Israel’s population but accounts for 40% of the country’s coronavirus cases.

When I moved to Israel from Cleveland, I was surprised by the hostility that some Israelis openly expressed towards the haredim, as ultra-Orthodox Jews are known in Hebrew. I heard griping, first and foremost, about the fact that almost all haredi men of draft age are exempt from military service. But there was also grumbling about government funding for ultra-Orthodox educational institutions that fail to teach core subjects like math, science and English – which are necessary if the graduates of these schools are to be integrated into the workforce.

But that’s not the main goal of most of these schools, which view Torah scholarship as the highest form of learning. In the view of many in the haredi community, integration is not an opportunity but a threat to the community’s identity.

The chasm between mainstream and largely secular Israeli society and the ultra-Orthodox community has reached new depths over the past couple of months amid blatant disregard for COVID-19 restrictions on the part of some haredi Israelis. It has included mass prayer during the High Holy Days and even large weddings, in contravention of the ban on large gatherings.

Some haredim have claimed Israelis are applying a double standard since political protests have been permitted during most of the pandemic without major restrictions. But outdoor protests are not incubators for the virus to the extent that events such as weddings are, where people eat without masks and socialize, particularly if the events are indoors.

This month, one of the country’s most influential ultra-Orthodox rabbis, Rabbi Chaim Kanievsky, who as I write this is fighting for his life after being infected with COVID-19, ordered his followers to ignore government restrictions and open ultra-Orthodox Talmud Torah elementary schools for boys. This has the medical community – and much of the Israeli public – up in arms.

The media coverage of the issue has featured members of the community saying that study and prayer are more important. At a news conference this month, Prime Minister Benjamin Netanyahu criticized the school openings, but said the police didn’t have the capacity to fully enforce the law. Health Minister Yuli Edelstein has called for government funding for offending schools to be cut off.

The message conveyed by some haredim that rabbinical authority takes precedence over the rule of law marks an ominous turn in relations between their community and the rest of the Israeli public. It’s ironic that, after all of the struggles to create a Jewish state and to secure international recognition for it, many haredi leaders are now undermining the state’s authority – which some of them have never recognized. On the flip side, I was saddened in listening to a haredi caller on a recent radio call-in show who spoke convincingly about the hatred that the community was feeling.

Once the COVID-19 pandemic is over, Israeli society has to address its relationship with the ultra-Orthodox community head-on, through a tough commitment to the rule of law and the message that hostility toward haredim is equally unacceptable.

Cliff Savren is a former Clevelander who covers the Middle East for the Cleveland Jewish News from Ra’anana, Israel.