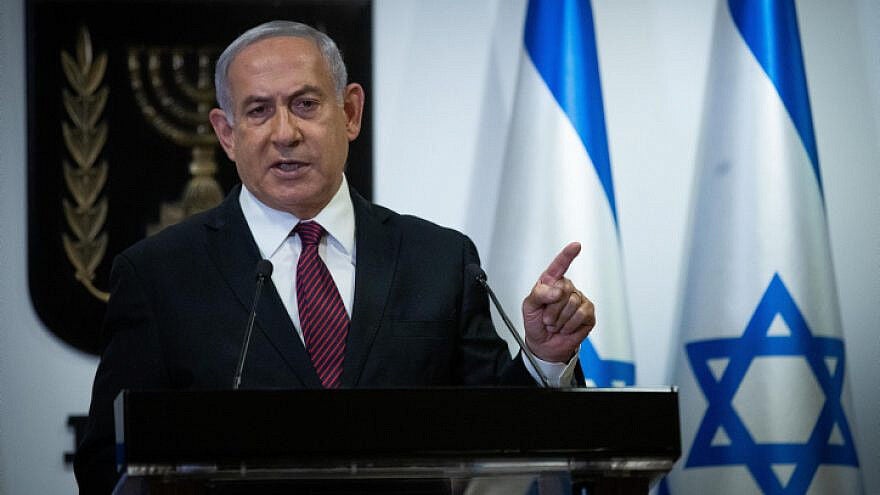 Israeli Prime Minister Benjamin Netanyahu gives a statement to the media at the Knesset in Jerusalem, Dec. 22, 2020.

Israeli Prime Minister Benjamin Netanyahu reminds me of the story of the guy who killed both his parents and then pleaded for the mercy of the court because he was an orphan. As he heads into the witness stage of his trial on corruption charges, the prime minister is objecting to his trial being conducted during an election campaign. Israel heads to the polls for the fourth time in two years on March 23.

How the court will maneuver that minefield is not yet clear, but whatever the three-judge Jerusalem District Court panel decides, they should remind the prime minister that, like the orphan in the story, Netanyahu is to blame for the election. And there is little doubt that his prime motivation in engineering repeated elections has been to secure a parliamentary majority to pass a law giving himself immunity from prosecution.

He was so desperate to remain in office despite three inconclusive election results that he agreed last May to share power with Kahol Lavan party leader Benny Gantz through a rotation agreement in which Netanyahu is serving first as prime minister and Gantz was to follow in November of this year.

People who have worked with Netanyahu warned Gantz that the prime minister would never keep his word, so Gantz worked out what he thought was an iron-clad deal enshrined in law. The only way left for Netanyahu to avoid the agreement was if the Knesset failed to pass a budget – precipitating new elections. And that’s precisely what Netanyahu engineered, repeatedly avoiding passage of the budget.

He couldn’t be sleeping well at the moment. Opinion polls suggest that he could finally lose power the fourth time around. But I’m not sleeping well either due to one poll showing that he could cling to power with support from one of his former staffers, Naftali Bennett, the leader of the right-wing Yamina party. Bennett, a son of immigrants from San Francisco, has remained non-committal about whether he would bring his party into a Netanyahu-led government.

A month ago, it might have been thought that Netanyahu would be a shoo-in, if for no other reason than for securing an early and huge supply of the coronavirus vaccine from Pfizer. The fact that most of the Israeli population 50 and over has already been vaccinated is a tribute to the prime minister – but even more so to Israel’s incredibly well-organized and computerized public health system.

The health system data shows that the vaccine is working. But among the mostly younger Israelis who have not bothered to get vaccinated, it’s running rampant, in part due to the more contagious and maybe more lethal British variant.

In perhaps the greatest sign of the prime minister’s desperation, after years of vilifying the Arab parties in the Knesset, Netanyahu is now attempting to cultivate Arab voters and has even positioned himself to get the support in the next Knesset of the United Arab List – an Islamic party that probably won’t get seats in the next Knesset. On the other end of the spectrum, it has been widely reported that Netanyahu was involved in creating a merged Knesset slate of two far-right parties, one of which, Otzma Yehudit, is headed by a former disciple of the late racist firebrand Rabbi Meir Kahane. The merger makes it more likely that the two parties will garner enough votes to get seats in the Knesset and – perish the thought – join Netanyahu’s next government, if there is one.

Next month, Netanyahu will mark 12 unbroken years in office. Israel has no limit on the number of terms a prime minister can serve, but he’s living proof of the need for such limits.

Cliff Savren is a former Clevelander who covers the Middle East for the Cleveland and Columbus Jewish News from Ra’anana, Israel.