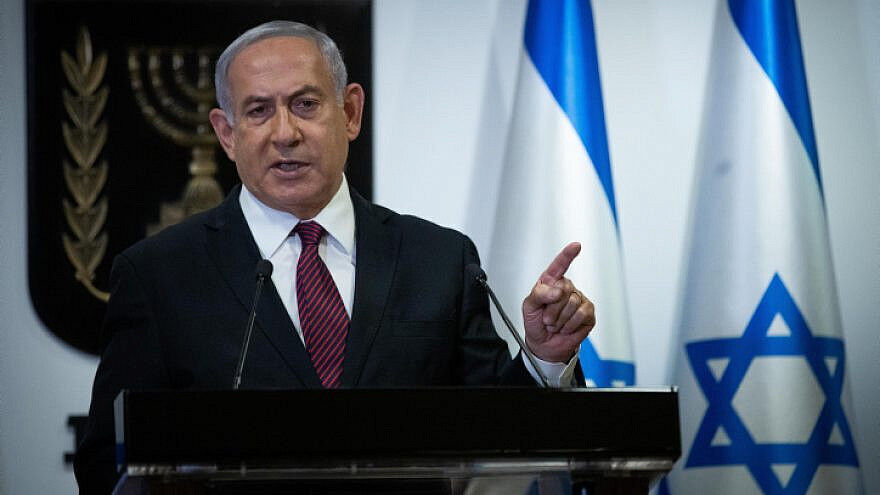 Israeli Prime Minister Benjamin Netanyahu gives a statement to the media at the Knesset in Jerusalem, Dec. 22, 2020.

Last week, Israeli President Reuven Rivlin, whose role as head of state is largely ceremonial, stepped into the political limelight and tasked Prime Minister Benjamin Netanyahu with forming a new government, following last month’s Knesset election. Netanyahu was tapped for the task a day after his criminal trial on charges of bribery, fraud and breach of trust began in earnest, as the first witness against him took the stand.

The criminal charges against Netanyahu were clearly on the president’s mind, and at least according to media reports, when he presided over the swearing-in of the new Knesset, Rivlin avoided even having his picture taken with Netanyahu.

“This decision is not an easy decision in my view on the level of ethics and values,” Rivlin said. “The state of Israel is not something that should be taken for granted. I was born 10 years before it was established. I am fearful for my country, for our country, but I am doing what has been entrusted to me as president of the state of Israel, who is subject to the provisions of the law and the rulings of the court.”

It seems unlikely Netanyahu can cobble together a coalition that would command a majority of at least 61 seats in the 120-seat parliament, but he obtained the advance support of 52 Knesset members, compared to 45 for the leader of the centrist Yesh Atid party, Yair Lapid. The leader of the right-wing Yamina party, Naftali Bennett, received the support of seven seats – his party’s seats – while 16 seats remained uncommitted for any candidate.

“In such a situation,” Rivlin said, “in which there is no majority of 61 and in which there are no other considerations indicating that any of the other candidates have the prospect of forming a government,” he took the decision based on the math.

The good news is in all probability, Netanyahu will fail. In the outgoing government, as dysfunctional as it is, Netanyahu must share power with Benny Gantz’s Blue and White party. That ties the prime minister’s hands and prevents him from abusing his power, for example, by seeking to pass legislation that would give him immunity from prosecution. Until a new government is formed, Gantz is there to look over Netanyahu’s shoulder.

This is the fourth election in two years in which Netanyahu has failed to secure a firm mandate. The problem is no one else has either. Over the next few weeks, Lapid and Bennett probably still have a shot at forming a government together – in which Bennett would serve as prime minister for roughly two years, followed by another two for Lapid, although Bennett has not yet committed to such an arrangement.

Bennett is a former high-tech executive, the son of immigrants from San Francisco and a resident of my Tel Aviv suburb of Ra’anana. Lapid is a telegenic former television anchor and newspaper columnist.

It’s not the election system that’s the problem. It’s that Netanyahu has been wielding the levers of power for his own personal ends and has the support of his Likud party in doing so. Once Netanyahu is moved aside, the system will work well again.

The day before he was tapped to try to form a new government, Netanyahu went on television and engaged in another shameful attack on the judicial system in which he claimed to be the victim of a witch hunt. If by some chance, he does form a government – presumably by luring in defectors from the anti-Netanyahu bloc – anyone who loves Israel should be concerned about the abuses that he would engage in to remain in power.