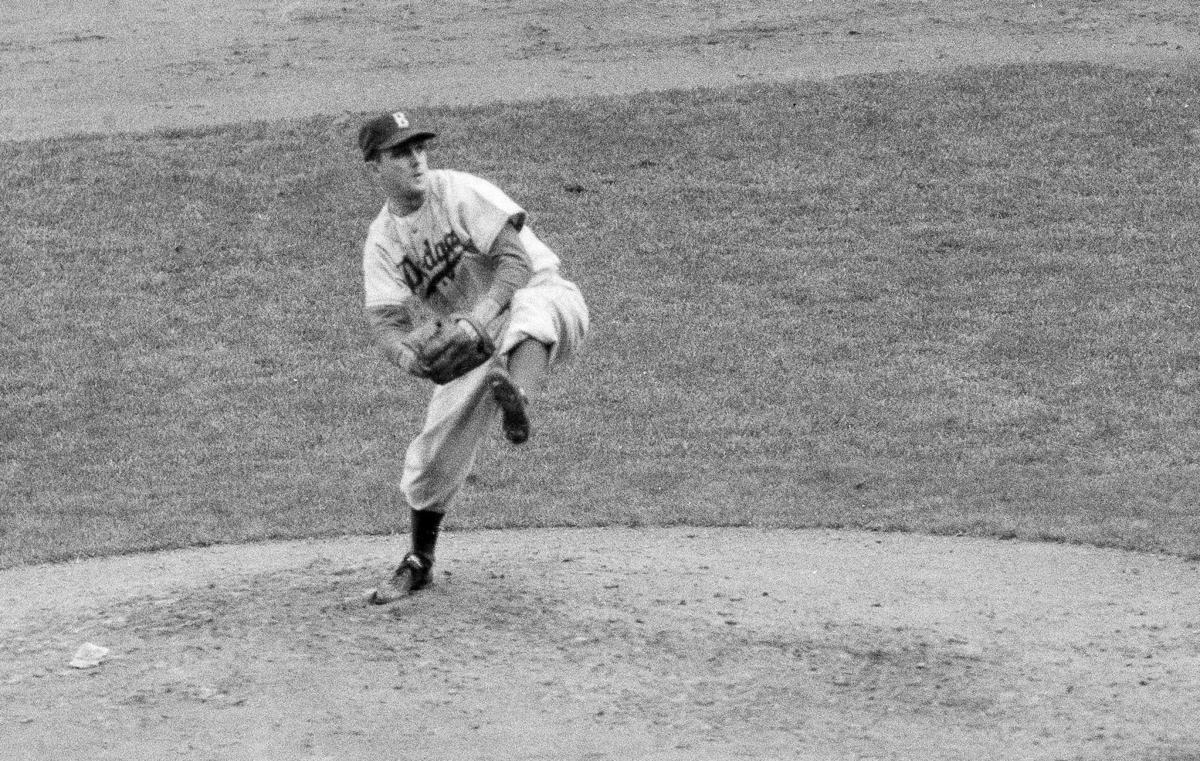 In this October 1952 file photo, Brooklyn Dodgers' Carl Erskine pitches against the New York Yankees in Game 5 of the baseball World Series in New York. Up by 13 1/2 games in mid-August in 1951, Jackie Robinson and the Dodgers seemed destined. That was until rookie Willie Mays and the New York Giants came flying back, fueled by an incredible, late run in home games at the Polo Grounds, and forced a best-of-three playoff for the National League pennant. Erskine was warming up in the Brooklyn bullpen in Game 3 when Bobby Thomson connected for the famed "Shot Heard 'Round the World," a three-run homer in the bottom of the ninth off Ralph Branca that rallied the Giants to a 5-4 win. A half-century later, a giant secret was revealed: The Giants had rigged a spyglass-and-buzzer system in late July to steal catchers' signals and tip off their hitters.

Somebody once asked me what era of baseball I wish I could have had a chance to be part of as a fan. I thought about it and decided I would have loved to be in New York in the late 1940s and into the 1950s with the Yankees, Giants and Dodgers battling it out and Willie, Mickey and The Duke playing center field for their respected teams.

Not everyone loved it.

Stan Freeman, a longtime Lyndhurst resident was a boy living in Brooklyn, N.Y., who didn’t like it one bit. His love for the Brooklyn Dodgers has stayed with him through moves to Long Island, N.Y., Buffalo, N.Y., and Cleveland, where Stan and Fran raised two children, Barry of Solon, and Liz Gregory of South Euclid. They have five grandchildren.

Freman’s favorite Dodgers were Duke Snider and pitcher Carl Erskine, a right-handed pitcher who went 122-78 in 12 years with Brooklyn and Los Angeles. Stan, 77, a properties manager, cried when the Dodgers moved to Los Angeles after the 1957 season.

A little over a month ago, Freeman came across a note saying that Erskine, 94, is the only living former Dodgers. He found his address in Anderson, Ind., and wrote to thank him for all the great memories. Erskine became a successful banker in his hometown and has been married 74 years. A couple of weeks ago, Freeman received a letter – it was handwritten from the former pitcher who thanked him for reaching out.

He told Freeman that in the Giants-Dodgers playoff game, he was warming up in the bullpen, along with Ralph Branca when Thomson came up with the tying run on base. He threw a ball in the dirt just as manager Chuck Dressen called to see which pitcher was ready. When told Erskine just threw a wild one, Dressen said, “Well then, send in Branca.” That was a bad call.

Freeman is still a sports fan, but now roots for Cleveland teams. He has seen two no-hitters in person, one of two thrown by Erskine, and the other by Indians pitcher Dick Bosman. He was at ‘The Drive’ and three years later, he was in Denver to see the Broncos spoil the Browns’ hopes once again. In his younger days, he and his brother, Herb, attended the greatest game ever played – the Baltimore Colts’ overtime win against the New York Giants in Yankee Stadium.

“Use sports as entertainment,” Freeman said. “Don’t let it ruin your life.”

Oh yeah, Erskine told Freeman he has a granddaughter, Her name? Brooklyn.