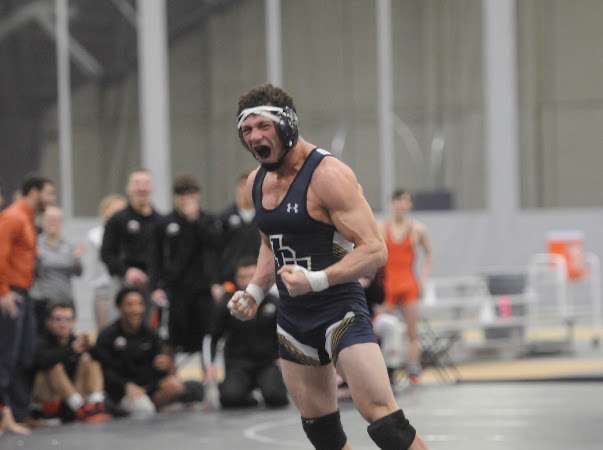 That is exactly what happened to Sammy Gross, who earned that honor in the 157-pound weight class, in a vote of the Division III coaches across the country. This unusual selection process took place because of the coronavirus, which among so many other things, shut down all sports at all levels.

Gross, whose individual record this year was 32-7, was a top-eight seed for the tournament, which was canceled at the last minute. The coaches took it from there.

His college wrestling career got off to a bad start, as he spent his first year at Northwestern University in Evanston, Ill. His season ended with a broken ankle, and, eventually a loss of interest in the sport.

In an interview with the Cleveland Jewish News, Gross said he ballooned to 200 pounds. He enrolled at JCU, and under the coaching of Mark Hawald and with the help of a sports psychologist, the spark returned. He had never seen the coaching techniques of Hawald before, and Sammy was all in.

He has pride in the way he is treated in school as one of a handful of Jewish students. He knows of at least six Jewish professors.

In turn, he helps coach the wrestlers at St. Ignatius High School in Cleveland. He still has one year of eligibility and looks forward to repeating as an all-American. Sammy has an undergraduate degree in economics and has one more year to receive his Masters in Business Administration. He is not sure where that will lead him, but with his attitude and drive, it is not hard to picture him doing whatever he decides to do.