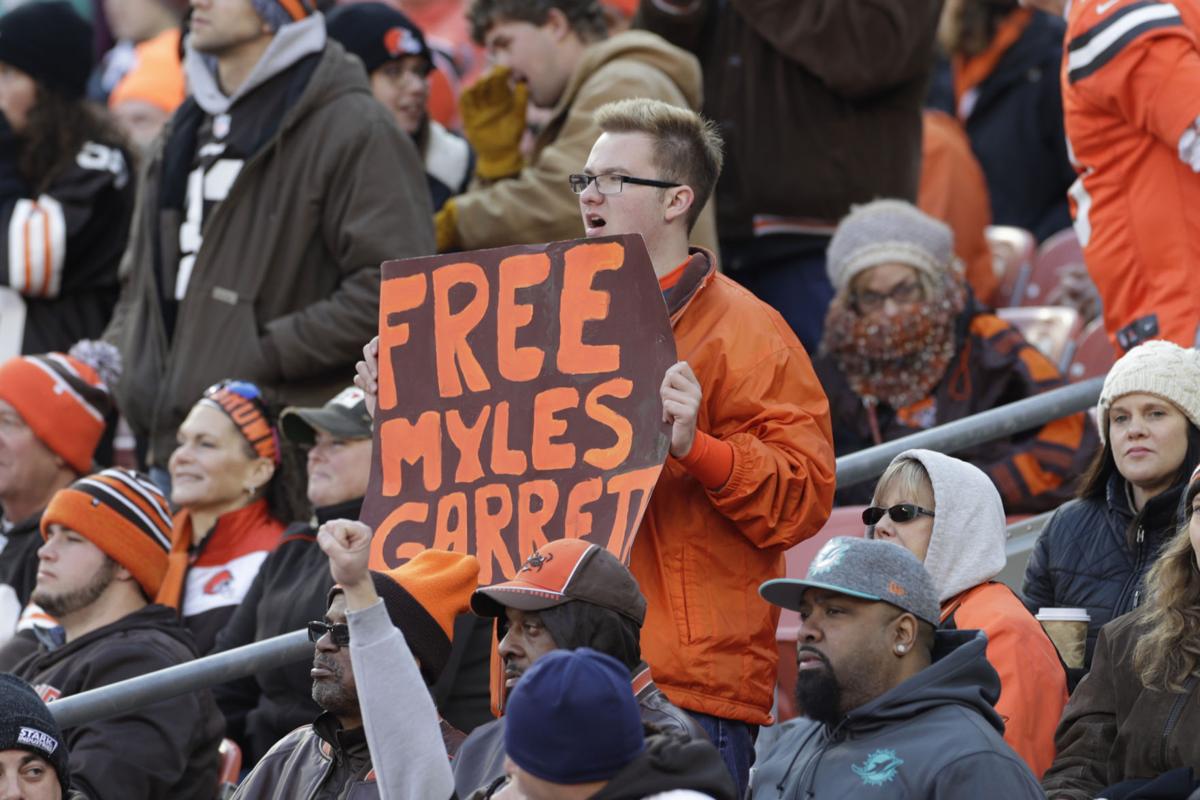 A fan holds up a sign in support of Cleveland Browns defensive end Myles Garrett during the first half of an NFL football game against the Miami Dolphins, Sunday, Nov. 24, 2019, in Cleveland.

Before you say the NFL and the referees hate the Cleveland Browns, take a deep breath and imagine what would have happened had Myles Garrett’s helmet connected solidly on the head of Pittsburgh quarterback Mason Rudolph. I’m not trying to lighten the blame of the incident by shifting the fault to Rudolph, who was trying to show leadership to his teammates when he made a dumb decision by returning to run down Garrett without a helmet on.

There are so many woulda, coulda, shoulda been scenarios that may have changed the outcome of the play and its ramifications.

What if the frustrated Browns defensive end just took the helmet and threw it into the end zone. We would be talking about a fine and a suspension probably for one game. If Garrett’s assertion that he heard a racial expletive by Rudolph were true, we could understand more easily his reaction. However, at least three Pittsburgh Steelers were within about 3 feet of Garrett and not one could back up that assertion.

Commissioner Roger Goodell felt the need to act swiftly, even before the weekend games that followed two days later. His order of a minimum six-game suspension is a clear message the NFL is concerned about head injuries.

I had only one negative call and two emails defending Garrett. Nothing in history makes one think what he did was expected. He is a big, talented player, who has never been accused of being a dirty player. He snapped. Football is a violent sport. He had a bad day at the office and, unfortunately, it will live with him forever.

Think about what could have been had he connected with the helmet. The only NFL player to die on the field was Detroit Lions wide receiver Chuck Hughes in a game against the Chicago Bears in 1971. The cause of death was a coronary thrombosis, which cut off the blood flow to his heart. That was a medical event, unlike what could have happened.

Joe “Turkey” Jones of the Browns planted Steelers quarterback Terry Bradshaw into the ground and we see tape of it almost every time the teams play. Bradshaw is a Hall of Famer, Jones is not. That play took place in 1976 and is still talked about.

Garrett’s bad day at the office will still be seen in another 43 years – unless someone takes a direct hit with a helmet to the head and the game of football is banned forever.

How would you like to be a player for Mexico City who also has a couple of school-age children? Do you want to have your kids go to school in London or Mexico City, and take part in the offseason program, including organized team activities? And by the way, you get cut after the final exhibition game. Good luck finding a job with some other team.