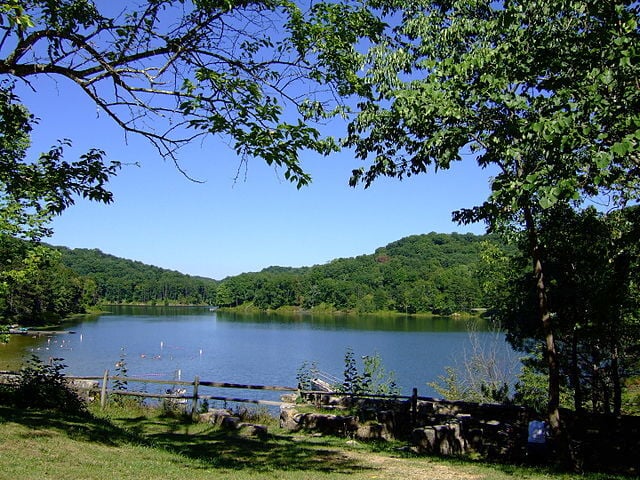 We finished dinner at the cabin, lit the campfire and planned to play flashlight tag to celebrate our last night at Lake Hope.

Our family had booked two cabins in southern Ohio for three days at Lake Hope State Park in June. There was no cell service, rare and random internet, but endless trees, sky and fresh air.

Everything went smoothly until a buzz of panic filled the air around 10 p.m. that Saturday. People huddled outside the cabin next door. Two children had fled their cabin and ran to a stranger’s cabin begging for help. “Our mom is trying to kill us,” they cried.

They told us their mother turns violent when she drinks and she had been drinking all day. The children had called 9-1-1 four times but the calls never went through.

A man in the cabin next to theirs heard their mom screaming and things being thrown. He ran to the dining lodge where there is sketchy cellphone service and reached the rangers.

I walked the mom away from the crowd to keep her occupied until the rangers arrived. She staggered and rambled that everything was fine. She wasn’t any bigger than me, but alcohol can make a person act 10 feet tall and bulletproof.

The rangers arrived and led her away in handcuffs. She yelled obscenities as one drove her away and the other sorted out what to do with the kids. I went into the cabin to talk to the boy, who was 9, and the girl, who was 7. They had blonde hair and bright blue eyes freshly washed from tears of terror and relief.

The girl had fled in her nightie and was barefoot. The boy shivered in shorts in the cold night air. We gave them warm clothes. My husband kept our grandkids entertained inside our cabin while our son guarded the door from any other chaos. My daughter and I listened as the details poured out of the children.

“She grabbed my hair and lifted me up. I was dangling by my hair,” the girl said. The boy shook when he talked about his mom hitting him and throwing fireplace tools at them. He lifted his shirt so the ranger could take a photo of the 4-inch scratch on his torso.

We tried to call for help but it didn’t work, he said. So they fled.

With little cell service and phones locked with passwords kids don’t know, it took two hours for the ranger to find a next of kin. Meanwhile, strangers swooped in to help. The people whose cabin they had fled to created a temporary refuge.

My daughter told the children how brave they were to speak up and flee for help. She told them they didn’t cause their mom’s drinking, that it has nothing to do with them.

We fed them peanut butter sandwiches and she grabbed her kids’ UNO game. We played cards until the people whose cabin it was needed to get their own kids to bed. It was almost midnight.

The ranger was going to take the children to stay at the dining lodge on the hill, but it was dark and deserted. The boy looked at me and asked the ranger, “Can she go with us?”

My heart melted. I took the ranger outside and told him if he would stand outside our cabin so the kids felt safe, they could sleep on our couch until their grandparents arrived. He agreed. As we left the cabin, the two kids paused to thank the strangers who had opened their doors.

“We’re not tired,” the children giggled as I tucked pillows under their heads. They fell asleep in seconds.

At 1:30 a.m., their grandparents pulled up. My daughter and her husband urged them to get help for the kids and their mom while I quietly prayed over them and asked God to protect them.

I wrote them each a note and slid it in their backpacks. My daughter tucked in the UNO game. She had written on one card a reminder to always use your voice, it is your greatest power.

Her husband gently carried each sleeping child to the car. We waved as they drove away into the dark.

A strange peace kept me awake for an hour. It all felt strangely holy. In the middle of nowhere, two children in danger never gave up hope.

It had found them, and blessed us all.

Connect with Regina Brett on Facebook at ReginaBrettFans and sign up for her weekly newsletter at reginabrett.com.