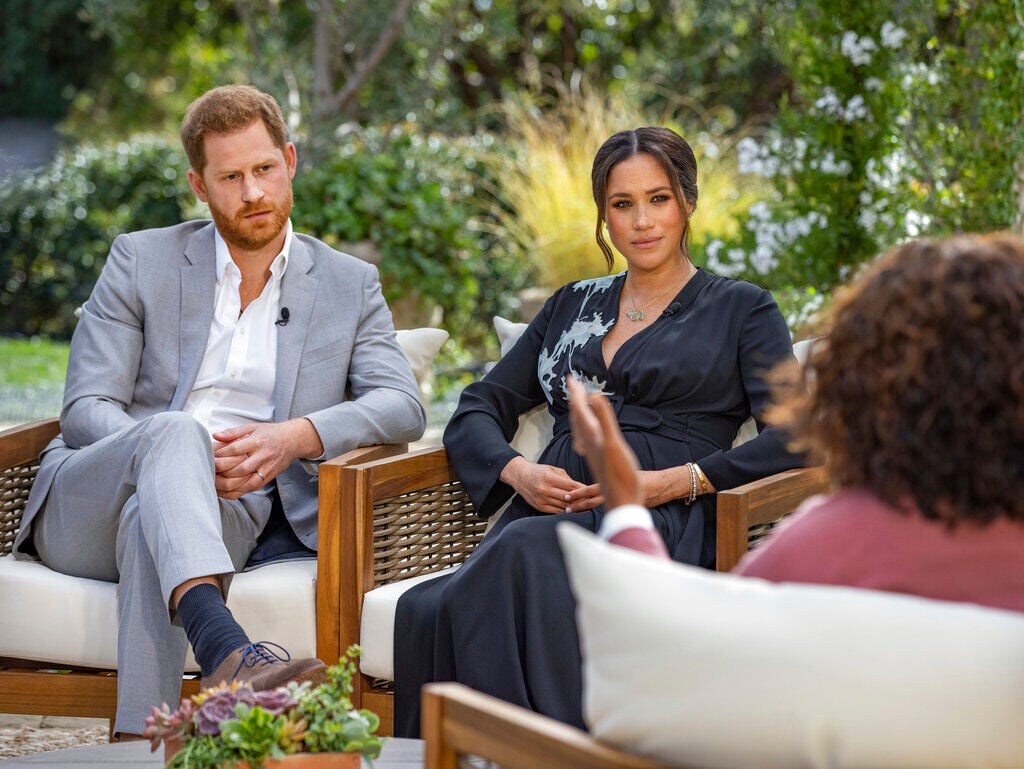 Prince Harry, from left, and Meghan, Duchess of Sussex, in conversation with Oprah Winfrey.

I want my two hours back.

That’s the thought I had after watching Oprah Winfrey interview Meghan Markle and Prince Harry.

It was hard to get past the “Kate made me cry, I didn’t make her cry” moment.

Really? Isn’t this the stuff of “Mean Girls” and playgrounds?

Actually, it’s the junk food British tabloids feed their audience. They make a lot of money making a big to-do out of everything the royals do, including how tears fell while Meghan prepared for her wedding to Prince Harry.

The tabloids wanted to start a cat fight. Let’s pit Prince William’s wife, Kate Middleton, against Prince Harry’s wife, Meghan Markle. It sells papers. They love chasing the royals, even after they chased Princess Diana all the way to her death.

Then there was the revelation of racism during the interview.

People were shocked, shocked to discover the royal family might be a tad racist. Really?

I’m Irish, so it doesn’t surprise me at all. We grew up knowing we weren’t allowed to hate anyone, except the English, and that was because they let our people starve to death, even the children, whose lips were green as they died from eating grass in a futile effort to survive.

I don’t doubt the royal family is racist. We’re all racists in varying amounts and degrees. Most of us just don’t know it. We are slowly waking up, slowly evolving.

Maybe we all expected more from the royal family since the Meghan-Harry nuptials featured a gospel choir and Bishop Michael Curry, the first Black presiding bishop of the U.S. Episcopal Church who quoted the Rev. Martin Luther King Jr. on “the redemptive power of love.”

We thought we were witnessing a modernized monarchy welcoming a divorced, American, biracial actress with open arms. Yet, didn’t we all collectively cringe watching Meghan’s mom sitting all alone in that pew at her daughter’s wedding? Where were her peeps? Her besties? The village that helped her raise her daughter?

The mother of the bride didn’t seem supported to me, lost in that sea of white folks wearing hats. It shouldn’t surprise us to learn Meghan doesn’t feel supported.

Oprah gasped when she learned Harry had been asked by an unnamed family member “how dark” their newborn son’s skin might be.

It’s a sad truth, but it is a truth, and not just in the House of Windsor, but in houses all over America, including the houses of African Americans, that families often wonder secretly and out loud how light or dark a baby will be. I’m not saying it’s right. Of course it isn’t. But it is a reality.

Oprah knows that. Meghan surely knows that. My Black friends have talked about it for years. Yes, we’re all a little bit racist. Or a lot. We all have work to do.

Being part of a royal family is a royal pain. Life within the royal family is so isolating and lonely that Meghan contemplated suicide, and when she asked for help, even begged for it, she didn’t get it.

I’m grateful she was so honest about her mental health struggles and opened the door so others who suffer will get help.

But the interview opened another door.

CNN reported the interview with Oprah “was a cultural earthquake, with upwards of 17 million viewers measured by Nielsen’s TV ratings scale.”

CNN has launched “the first edition of Royal News, a new weekly newsletter from CNN bringing you the inside track on the royal family, what they are up to in public and what’s happening behind palace walls.”

I don’t want to know.

Just tell me that Meghan gets counseling, that Prince Charles continues talking to his son, that Harry and William become best bros again, and that no one talks about the skin tone of any family member.

Because in the end, this is about family, a family that needs a lot of help, and doesn’t need us peering in the windows watching.

The best part of the interview was watching Meghan, Harry and Archie frolic on the beach. They looked like a happy, healthy family.

The more we all leave them alone, the more they might be able to remain just that.