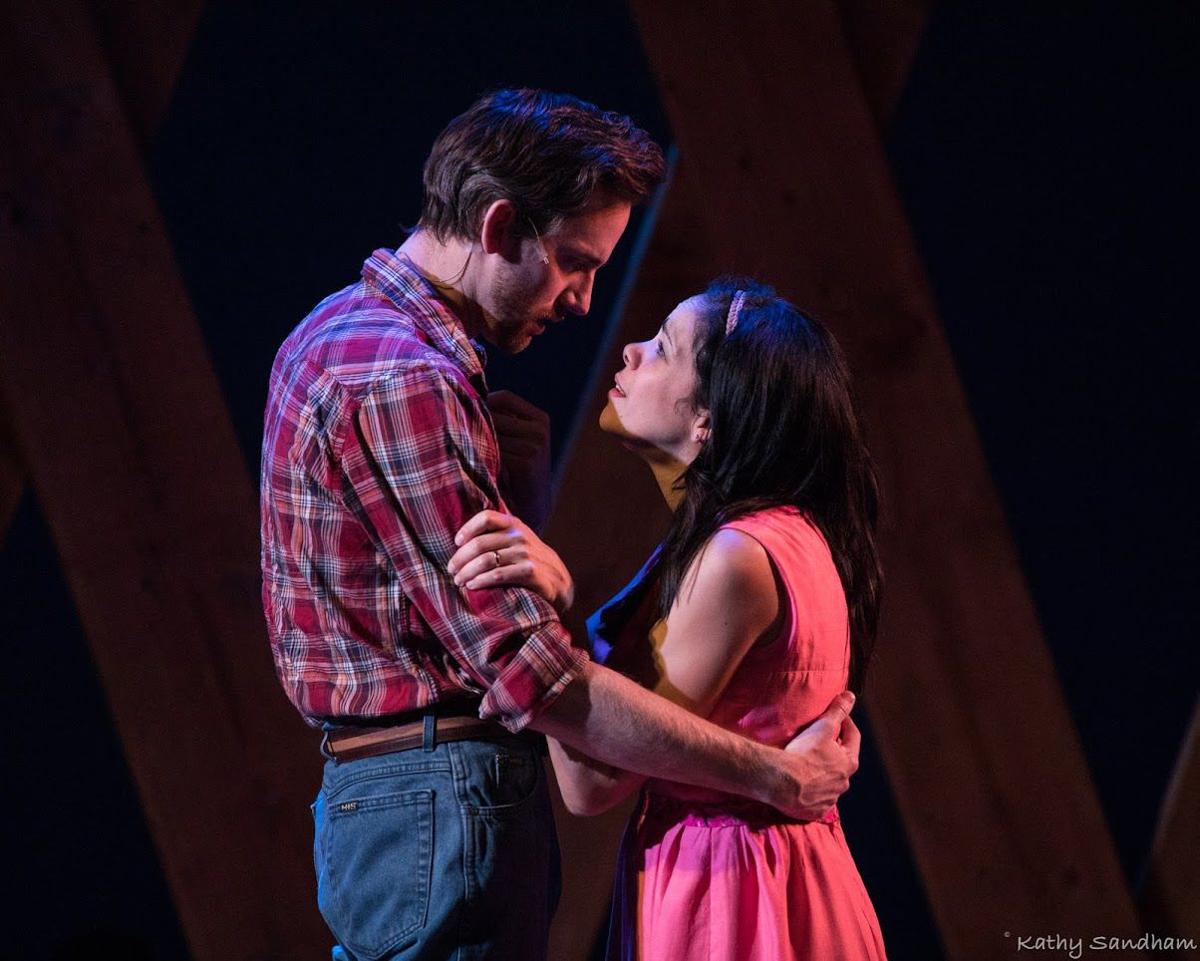 Shane Patrick O'Neil as Robert and Trinidad Snider as Francesca 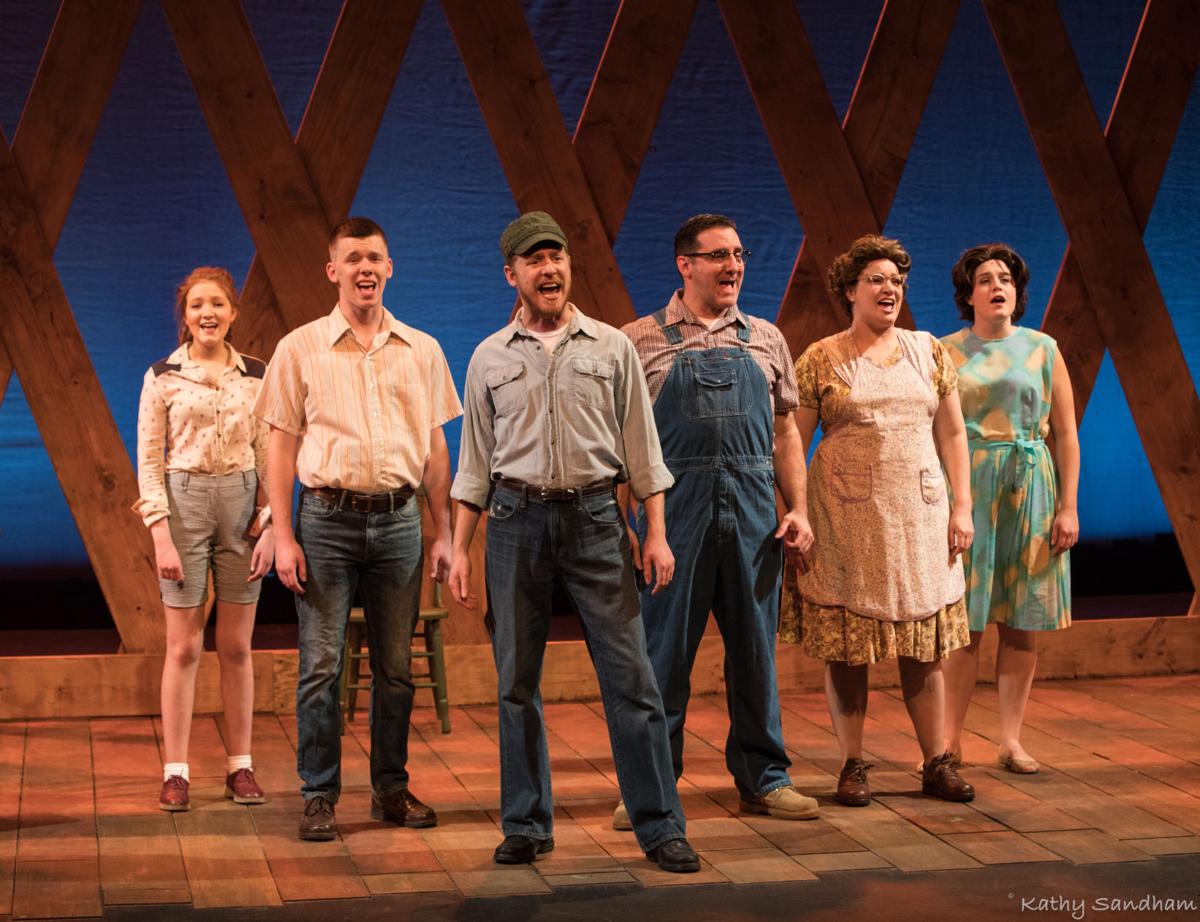 Artistic director Martin Friedman has an affinity for underdog musicals.

He’s staged “Anyone Can Whistle,” which was a commercial flop, a critical disaster and, for composer/lyricist Stephen Sondheim, a devastating professional failure when produced on Broadway in 1964.

And on stage at Lakeland Civic Theatre is the novel-to-screen-to-stage musical “The Bridges of Madison County,” which opened in 2014 and closed not long after at Broadway’s Gerald Schoenfeld Theatre.

“The Bridges of Madison County’s” overt sentimentality and schmaltz reads well on the page where it earned “Best Seller” status as a 1992 romantic novel by Robert James Waller. And it was a box office success when imbued with Hollywood star-power (Meryl Streep and Clint Eastwood) and sweeping cinematography in 1995.

But it had limited appeal as Marsha Norman’s live stage adaptation, where its Tony Awards for Best Original Score and Best Orchestrations by Jason Robert Brown could not salvage its rather sparse narrative, its often-contrived literary dialogue and the aforementioned schmaltz.

But in addition to his attraction to underdogs, Friedman also has an affinity for finding the heart in everything he stages, particularly the underdogs. Which is why his Northeast Ohio premiere production of “The Bridges of Madison County” works so well.

The musical tells a simple and singular tale of a Neapolitan immigrant, Francesca (an exotic and wistful Trinidad Snider) – a World War II war bride and now a mother of two typical teens (Frank Ivancic and Anna Barrett) – living on a hot desolate Iowa farm in a cold, loveless marriage with Bud (a perfectly stoic Scott Esposito). She finds love and pent-up passion when a sensitive and sensuous National Geographic photographer, Robert Kincaid (a handsome but not hunky Shane Patrick O’Neil), knocks on her door asking for directions to a local bridge.

Rounding out the cast of characters is neighbor and well-intended busybody Marge and her down-to-earth husband Charlie (a perfectly cast Amiee Collier and Brian Altman), and flashback versions of Francesca’s sister and Robert’s ex-wife (Amanda Tidwell).

As they did in their remarkable 2014 production of “The Light at the Piazza,” Friedman and designer Trad A. Burns manage to bring a European flavor and a palpable sense of longing to the stage, despite this play’s Iowa setting and the realistic covered bridge built to house all the play’s action. They do this through unhurried pacing, rich lighting and the long, dramatic shadows it creates, and the confidence to linger during the significant silences in romantic moments before finally fading to black.

And Friedman has gone to the well to find tried and true performers, including some from his productions of “Piazza,” “Whistle” and the recent “Into the Woods,” who can deliver authentic portrayals, handle composer Jason Robert Brown’s demands on vocal range and virtuosity, and provide the gorgeous harmonies required in many of the musical numbers.

The ensemble is superb and while this difficult musical pushes Snider precariously close to the limits of her upper register and offers some challenges to O’Neil as well, the two are a genuine pleasure to listen to and watch, particularly when singing duets such as “One Second and a Million Miles.”

Underscoring all of this is a superb string-heavy orchestra under Jordan Cooper’s stalwart musical direction. And they are busy, for Jason Robert Brown assigns a song to every emotion and to every occasion – even Robert’s ex-wife gets a song – each with intelligent lyrics and inventive melodies. Except for the most important occasion.

Late in Act II, Franchesa needs to decide whether to leave with Robert after their affair or stay with Bud and her family. This defining moment gets short-shifted because it gets no song. And, by extension, so does Snider, who is not given a poignant lyric or a sustaining note to capture the pain behind that decision.

And we are short-shifted as well. After nearly three hours of watching Francesca’s sensual awakening, negotiating through romance novel dialogue and listening to one passionate song after another, there is no song to provide an outlet for our own emotions at this key moment. Fortunately, Snider’s fine acting and tearful response to her decision serves as an airborne contagion for those of us willing to inhale and be affected.

Breathe deep. You’ll have earned it.

What:  “The Bridges of Madison County”