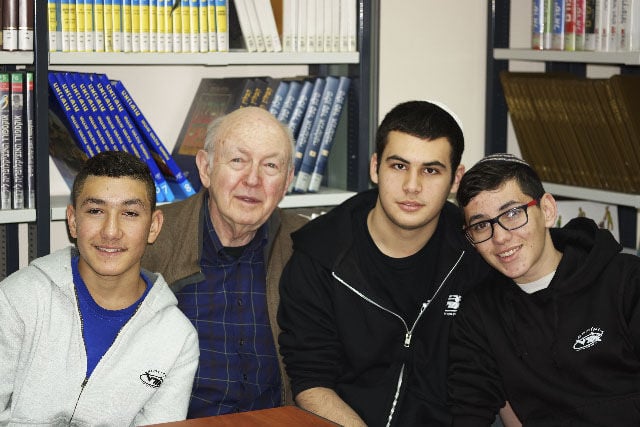 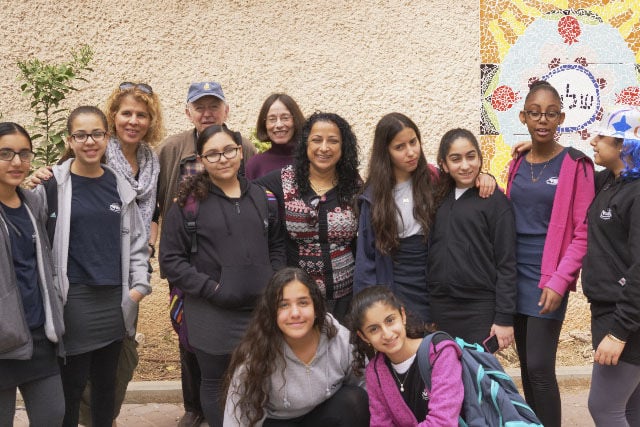 On a snowy, cold morning of Feb. 18, 2015, several Clevelanders including my wife, Diane, and I made our away to the airport for a flight to New York and then Israel for a program in Beit Shean, Israel, organized by the Jewish Federation of Cleveland. Four volunteers including us were assigned to help teach and coach students in the city’s main Modern Orthodox middle school; several others worked with young children in the elementary school. In addition, two other volunteers worked on an experimental farm, planting crops in several hot houses, as well as maintaining existing plants.

What were our motivations in participating? For Diane and me, the chance to aid Israeli students in any capacity was compelling. Also, we were especially interested in meeting Israelis on Beit Shean’s Kibbutz Shluchot, where we were housed, and in their homes throughout the region, learning about their experiences and family history. All of us wanted to deepen our knowledge of Israel, its challenges and accomplishments, as seen from the family and small community perspective. Israel for many of us in the United States is still a miracle and a place closest to home and family; indeed many of us including Diane and me have family there, who survived the Holocaust and eventually emigrated from Poland. In short, it was a chance to reconnect with Israeli society, charge latent pioneer spirits and stir our imaginations.

What did we find and what was memorable? As expected Israelis were very accommodating and overlooked our foibles and faux pas regarding religious observance, etiquette, and speech. Everyone was tolerant even when politics were brought up, mostly local politics. We were there to learn and observe, and the Israelis understood our actions and speech, recognizing that all of us were supporters and long-time Zionists.

My first impression of Israel from small a town perspective is the amazing diversity of the people, the ingathering of Jews from all over the Middle East and North Africa. Beit Shean had an early settlement of Kurdish Jews, mostly from Iraq, in the early 1950s. But there were Jews who sought and still seek safe haven from societies in political turmoil. In the past, they streamed in from dozens of countries including Yemen and Iran to the east, and Morocco, Tunisia, Libya, Ethiopia and Egypt in North Africa. Individuals or families brought their special culture, languages, habits, cuisine, family rearing traditions, and politics. They also contributed diversity in skin color, facial distinctiveness, and intellect derived from their original home. The variety of our people is startling and stimulating. This was not by any means a European-centric society, except insofar that it is firmly democratic, equalitarian, and capitalist, with an effective judiciary and European style parliamentary government. An estimated 61 percent of Israelis have roots in North Africa and the Middle East.

The landscape was also inviting. At one time, the land near Beit Shean was neglected with desert-like soil conditions, since it is searingly hot in the summer. When we were there, in the early Spring, the land was verdant and inviting, with croplands planted and tilled. The residents in the region also created productive fish ponds in appropriate spots, producing the ubiquitous St Peter’s fish, among other varieties.

There was varied religious practice among the roughly 18,000 residents of the town, from non-observing to Modern Orthodox and Hasidic Orthodox, among others, each with separate prayer houses and rabbis. While there are many religious taboos and political differences, there is a unity of purpose in supporting the State, serving in the army, and educating the young, both boys and girls.

What were conditions in the school and for the students? The schools were similar to those found in suburban areas in Cleveland. The buildings were surrounded by playing fields for soccer, basketball, and track, among other sports. The buildings were in good condition, with traditional classrooms; there was even a teacher’s room for coffee and tea, Students, as expected, were lively and demonstrative, with boys separated from girls in most activities.

For many students, English is still a challenge, but some are becoming fluent by viewing English language television, although this does not enable them to read easily or fully understand the material. In addition, most students have Hebrew-English apps on their cellphones to provide help with difficult words. They have a full curriculum and most are serious students, realizing they will need this educational experience to pursue careers.

The teachers are well-trained and supervised by department heads and principals. The teachers we worked with are dedicated to their students and their profession. They were organized with lesson plans and also wanted to make the experience meaningful and enticing both for the students and for those of us volunteering in the school. We also participated in a field day where both boys and girls (in separate areas) were given challenging physical tasks, such as walking on ropes strung between trees, and in races of several types.

What is the Jewish Federation of Cleveland contributing to this effort of helping the Beit Shean community? First, the Federation has created opportunities for Clevelanders to volunteer for a program to help in the community development effort of our sister city, Beit Shean. Programs include Bridge the Future (BTF), focused on promoting the region by increasing tourism and advising on entrepreneurship for start-up businesses.

Our Federation also supports Youth Futures (YF), which focuses on youth at risk. Professionals in Cleveland were involved in structuring this effort. It is run by the Jewish Agency in Beit Shean and the Valley of Springs. YF provides counseling to youth and families. It now serves 200 children ages 6 to 13, including new immigrants from the former Soviet Union and Ethiopia. Under the program, the children meet with mentors in weekly individual and group sessions.

Cleveland is also part of the larger Jewish Agency program, Partnership T2Gether (P2G). It has led to the establishment of 45 U.S. city partnerships including Cleveland’s, in an aggregate of some 450 programs throughout Israel. The aim is to develop and strengthen partnerships throughout Israel like ours with Beit Shean. Cleveland also funds Cleveland House where counselors and teachers meet students in need. It also houses the staff of the Cleveland volunteer program.

What did I learn from this program? First, the Israeli unification efforts have been successful, integrating a diverse Jewish population seeking safety after the Holocaust and from threats and violence aimed at them in North Africa and the Middle East. Despite language and educational differences, Israel has forged a strong union, using one language and adhering to the rule of law, and to democracy, even though many had no experience with its governing principles. This was accomplished in two generations, creating a political and economic powerhouse, yet still providing a haven for immigrants, similar to what has occurred in our own nation.

After the state’s creation in 1947, refugees from the Arab lands poured in. They were expelled from their birthplace after the establishment of Israel, often forced out by death threats and newly enacted discriminatory laws restricting their occupations and legal rights. In the early years, many new immigrants were settled in newly established kibbutzim, on Israel’s frontiers, carefully planned to provide protection for the country from the hostile Arab people on the borders, in Jordan, Syria, Lebanon and Egypt.

In recent years, Israel has been dealing with another wave of immigrants from Russia and other parts of the former Soviet Union. In the past, such groups needed welfare and housing to survive. Many now come with marketable skills, but still have to learn the language and be fully integrated into the society.

What is needed from the U.S. at this stage? An important ingredient of the Federation’s program is to show that Cleveland’s Jewish community and the Jewish people of the United States in general care about the well-being of our Jewish brethren in Israel. In addition, it is important that we focus on specific needs in education and child development, keys to Israel’s future and its ability to survive. Beit Shean’s leaders have made enormous progress in building their community and school system. We in Cleveland can be a valuable force in furthering their efforts. Find out about the Volunteer Project for 2016 by contacting the Federation’s International Operations office or find it on line at jewishcleveland.org.

This report is one of a three part series. The next one deals with the Kibbutz Shluchot. The final one will cover Beit Shean and the wider regional community.