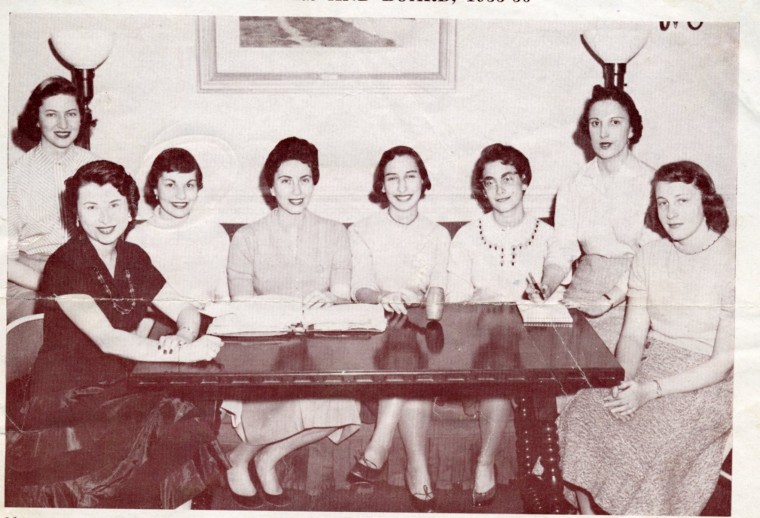 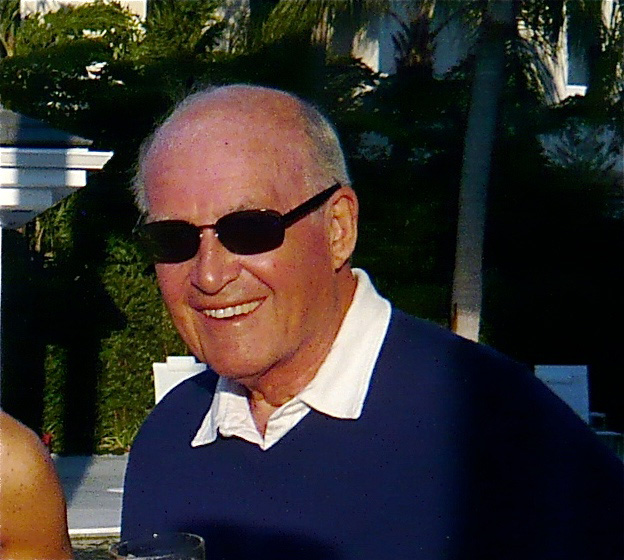 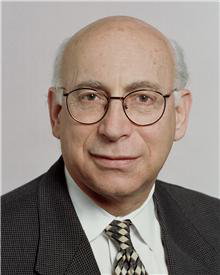 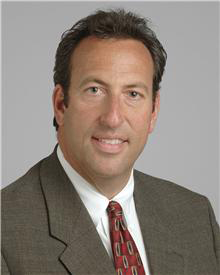 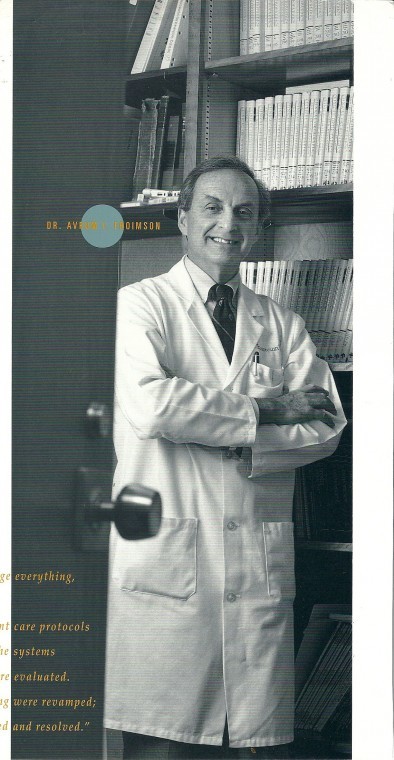 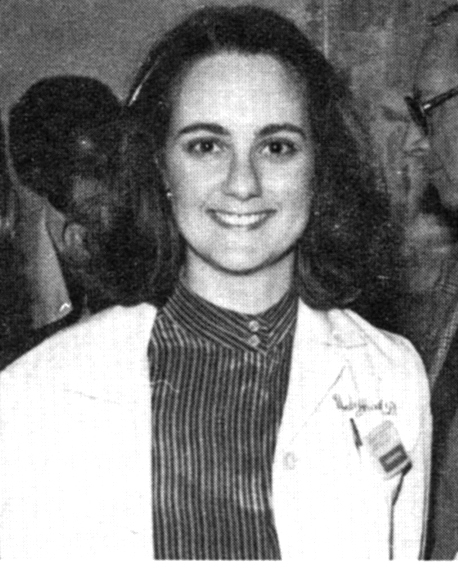 I spent 10 years at Mt. Sinai from 1980-1990, where colleagues Wulf Utian, Jim Goldfarb and I developed the department of obstetrics and gynecology. It included the first in vitro fertilization program in Cleveland, which was responsible for the world's first surrogate pregnancy.

Mt. Sinai was a terrific place to practice medicine during the 1980s. There was a tremendous camaraderie among physicians and staff; it seemed that  everybody knew everyone. Friendships persist to this day. Today, I practice high-risk obstetrics as part of the Cleveland Clinic Women's Health Institute out of Hillcrest Hospital, where I find many colleagues from the old Mt. Sinai days. The years at Mt. Sinai were among the happiest years of my career.

I was born at Mt. Sinai Hospital on Father's Day 1957. Eight years later, my father Sol was hospitalized there with a heart attack, and I remember waving to him from the parking lot because children weren't allowed on the floors at that time. Due to excellent cardiac care, we were blessed to have him 40 more years.

After graduating from CWRU School of Medicine in 1983, I did my internship at Mt. Sinai Medical Center from 1983-84, followed by my ophthalmology residency there from 1984-87.  I returned to Cleveland to join Drs. Solomon, Sholiton and Marcotty and became the head of the cornea section at Mt. Sinai for the remainder of its existence. In 1999, we became part of the Cleveland Clinic and Cole Eye Institute as their regional ophthalmology practice.

The day I remember best is May 5, 1996, when my daughter Jaclyn was one of the last children born at Mt. Sinai. One of my biggest regrets is that my son Bryan won't be able to train or practice there like I did.

Could it have been saved?

It's been over a decade since Mt. Sinai was abandoned, and when the thought of those events creeps into my consciousness, it still jolts me. I'm always taken aback for a moment that the passing years have not brought about some softening of my attitude or philosophical resignation about the sale and closing of the hospital.

In November 2000, there was a black-tie affair at Oakwood Country Club (may it also rest in peace). It was a celebration, a reunion, and sort of a memorial service for the hospital. The evening concluded with a satirical musical revue, "Demise and Consent" - the title speaks for itself. After the show, a physician who was privy to much of the decision-making at that time, came up to me and admonished, "If you knew what I know, you wouldn't be so critical and judgmental about how this was managed."

I didn't believe that then, and I don't today. What I believe is that you have to value something to fight for it - and Mt. Sinai was not valued as it should have been by the people that mattered. I believe there were definite opportunities for the hospital to survive in some form. The pain and irony of the situation have accentuated over the years by the unprecedented and incredible generosity of Jewish philanthropists toward the Cleveland Clinic and University Hospitals since Sinai was forsaken.

Some of my happiest memories are from my years as a student nurse at the Mt. Sinai Hospital School of Nursing. The closing of the school and, much later, the closing of the hospital are sad memories.

Student nurses were given the time and encouragement to give excellent patient care, and we were responsible for managing units on the evening and night shifts. When we graduated, we were fully prepared. I believe the closing of the school was a costly mistake, which has had huge repercussions in the years to come.

When the school closed, its records were dispersed, and finding information about our classmates was nearly impossible. However, several of us spent a great deal of effort locating the others, and in 2006, 50 years after we graduated, 15 of us (about half of the class) gathered for the first time. Practically everyone had worked in nursing since graduation, and some were/are still working.

I graduated from the Mt. Sinai Hospital School of Nursing and worked at the hospital for 12 years as a staff nurse in the ER and Intensive care units. When I served as a nursing supervisor, I once helped actor Paul Newman secretly go up to see his mother when she was a Mt. Sinai patient.

Many of the former staff still meet annually at the Mt. Sinai picnic, which I help organize. This year about 100 employees attended, ranging from doctors to nurses to housekeepers.

My father Samuel O. Freedlander was chief of surgery at Mt. Sinai for 20 years. Each patient's scars and face were memorized even if he did not always remember their names. But they remembered him - as their doctor with bedside manner. Even in the last few years, I have received calls from forever thankful and adoring patients. As a single parent, he raised my sister and me with wisdom, love and undivided attention.

My favorite memories of Mt. Sinai come from accompanying my father on rounds and sitting in the soft, oversized brown chairs, watching the parade of visitors as they checked in to see their families and friends. My sister and I observed every nuance of the reception desk scenarios. The card files, the telephone calls, the demeanor - smiles or rule-makers - personalities of the hospital's "front." We took the details home and emulated them - one of us playing visitor; the other, receptionist and vice versa.

My father was special, and his life at Mt. Sinai was full of rich stories. Mt. Sinai personnel were our extended family, filled with the professional colleagues and grateful patients. As an adult I valued the institution's place in the community and significance in the history of Cleveland.

The overarching idea behind Mt. Sinai was high-tech meets high-touch. The hospital was filled with smart people, many at the top of their specialties. We all knew and trusted each other, and if any one had a problem with a patient, we could quickly do an informal consult. Everything was a group effort.

We also had the largest animal research lab in the area, and med students enjoyed doing their research there. I did the first limb-lengthening surgery based on a technique I learned in Siberia from a Jewish doctor who knew how to make midgets taller.

Med students appreciated doing a rotation at our hospital. It was a great run for all of us.

I did my internship at Mt. Sinai in 1986-87 and met a beautiful pharmacy extern in the cafeteria. She became my wife of, now, 24 years, so I will always remember that cafeteria.

I also made lifelong friends. The attending physicians created a warm and inviting environment. I have three children, Isabel, Max and Alexa, who were born at Mt. Sinai in 1992. Thanks, Mt. Sinai!

My father Dr. Morton A. Shaw was the son of Russian immigrants. His father was so proud that he became a doctor that when my dad was an intern in medicine at Mt. Sinai in the early 1950s, my grandfather would sit in the lobby just to listen for my dad's name to be paged.

When I joined the staff of Mt. Sinai as a radiologist in 1982, the marketing department thought it was so unusual to have a father and daughter both on the medical staff, they asked if we would take a picture together for Father's Day. I was not too keen on it, but they begged us to do it, so I finally said yes, thinking the photo of me pinning a carnation on my father would never be seen. The next Friday my mother called me at work and said to look at the Cleveland Jewish News. Our picture was on the cover.

I joined the Mt. Sinai Women's Auxiliary in the 1960s, and it was a wonderful experience. We held fundraisers, volunteered, and had fancy luncheons at Oakwood Country Club. The snack bar was run by volunteers, and we served the best grilled-cheese sandwiches and ice cream sodas.

I was also a member of the Sunny Sinai Players, who entertained children. Former CJN editor Cindy Dettelbach wrote plays for the kids, and we enacted them. Many of the women I met through the auxiliary have become lifelong friends.

My mother worked as an RN at Mt. Sinai in the early 1950s, and I would often go with my grandfather Nathan Bilfield to pick her up at the end of the day. He'd pull his truck into a driveway off E. 105th St., park, and we'd walk to the front of the hospital, where he'd greet the guard in Yiddish.

Years later, when I completed my ophthalmology training in Chicago and moved back home to practice, I found the ophthalmology clinical and surgical facilities as up-to-date as the ones I used in a much larger facility.

I would occasionally drive by the loading dock on my way to the parking area and recall those earlier trips with my grandfather. There is no doubt my early experience at Mt. Sinai had a great effect on me, encouraging my interest in medicine. It was a privilege to be on staff of that fine teaching and healing institution.

Losing a member of the ‘family'

February 2000 marked the end of an era. I lost a family member, one I hadn't seen or been involved with for a while, but an important part of my life nonetheless.

The history of Mt. Sinai is rich with milestones and accomplishments. It started as a place to train Jewish physicians who were unable to find training elsewhere due to prejudice and as a place to care for the special needs of the Jewish community, including spiritual care and a kosher kitchen. It also served the needs of the underprivileged and poor of the city, in the process rendering millions of dollars of non-

In 1974, I got my first real summer job at Mt. Sinai for $2.25 per hour as a member of the technicians pool; our duties included emptying laundry, transporting patients, delivering specimens to the lab, even taking the deceased to the morgue. I was a 16-year-old, middle-class kid from the suburbs working side-by-side with guys who had grown up in Mt. Sinai's neighborhood and were supporting families. We served patients of all walks of life. While valuing people based on "the content of their character rather than the color of their skin" was stressed in my home while growing up, it was at Mt. Sinai that I truly learned what that meant.

Relationships begun that summer continued for decades. Over the next several summers and during the school years, I was a nursing assistant, respiratory care technician, emergency room technician and operating room technician. It was in the operating room that I learned I wanted to be a nurse and specialize in nurse anesthesia. There was something special at Mt. Sinai that I've never felt in any of the many other institutions I've been affiliated with, a sense of family, a sense of belonging, a sense of comfort and filial responsibility.

I was president of the Mt. Sinai Women's Auxilliary from 1969-71 and made wonderful friends. My husband and I saw many of the doctors who worked there socially, including Fran and Dr. Milton Linden. When both of our spouses passed away, Milton and I eventually got together. I was Milton's beloved companion until his death this year.

I loved the hospital and was heartbroken when they closed it.