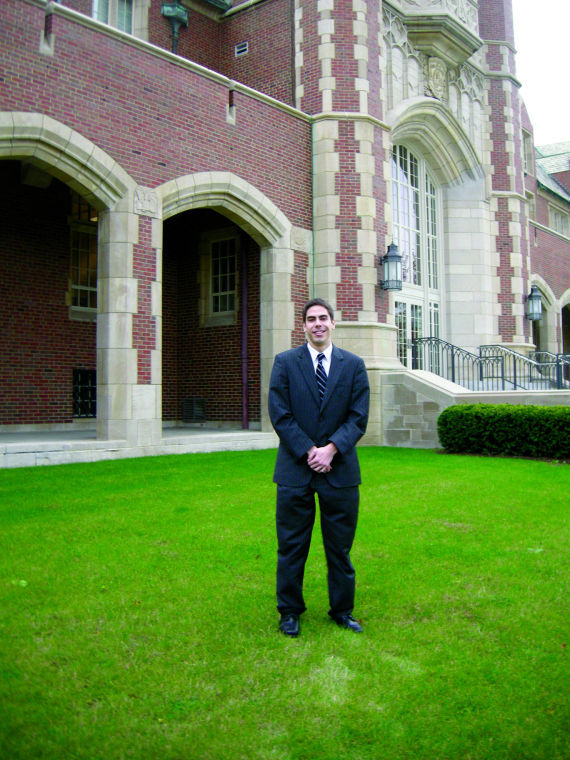 Interesting note: This September, Hillel at John Carroll University hosted a weeklong "What The Hut!?" celebration during which a succah was built on campus for the duration of Succot. That same week, B.J. Novak, a Jewish stand-up comedian and actor best known for playing the role of Ryan Howard on "The Office," was visiting campus for a homecoming event. David Markovich sent Novak a message on Twitter asking if he could stop by the succah when he came to campus. Novak replied to him a few minutes later agreeing to make an appearance. Novak picked Markovich up in a limousine and the two arrived at the succah together. 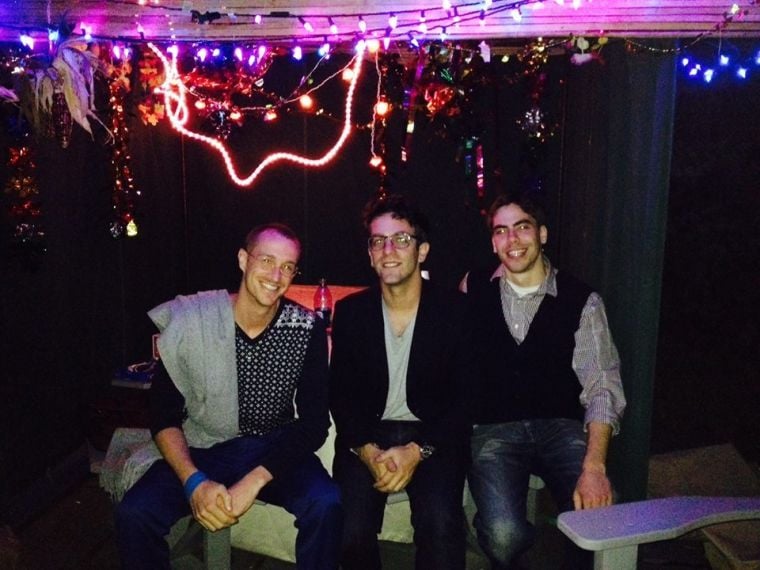 David Markovich, right, sits inside a sukkah with Guy Cohen, Cleveland Hillel’s Israel fellow this academic year, and B.J. Novak, a Jewish stand-up comedian and actor. The sukkah was built in September at John Carroll University and remained on campus for the duration of Succot.

Interesting note: This September, Hillel at John Carroll University hosted a weeklong "What The Hut!?" celebration during which a succah was built on campus for the duration of Succot. That same week, B.J. Novak, a Jewish stand-up comedian and actor best known for playing the role of Ryan Howard on "The Office," was visiting campus for a homecoming event. David Markovich sent Novak a message on Twitter asking if he could stop by the succah when he came to campus. Novak replied to him a few minutes later agreeing to make an appearance. Novak picked Markovich up in a limousine and the two arrived at the succah together.

David Markovich, right, sits inside a sukkah with Guy Cohen, Cleveland Hillel’s Israel fellow this academic year, and B.J. Novak, a Jewish stand-up comedian and actor. The sukkah was built in September at John Carroll University and remained on campus for the duration of Succot.

David Markovich is the guy every student knows on campus. Walking the halls of John Carroll University in University Heights, it’s difficult for him not to run into another student who stops to say “hi” or strike up a quick conversation.

After serving as president of Hillel for three years, working as Student Union senator for the class of 2014 and winning the Outstanding Student Leader Award two years in a row, it’s no surprise that Markovich is so well known.

At 21 years old, Markovich has already made an impact on the university. As he nears the end of his senior year, he hopes to make even more of one on the greater community.

Markovich grew up in a tight-knit family, living with his parents and his brother, Jacob, in University Heights and then Beachwood.

“He had a big influence on me and he always shared his stories with me. I was very close with him,” Markovich said of his grandfather, who died in September 2012. “He always had a very unassuming nature and so I’ve learned to, no matter what, stay humble.”

Markovich’s parents and grandfather were among the only Jewish families living in their village before they left to come to the U.S. in 1979. Markovich said his parents have taught him many lessons from their upbringing.

“It was tough growing up for them. Because of that they’ve taught me to really appreciate the opportunities that I have here,” he said.

Judaism serves as a defining characteristic for Markovich and has played a significant role in his life.

“Without going to a school like Schechter, or without my grandfather, I wouldn’t be where I am today. No doubt about it,” he said.

As Markovich neared high school graduation, he narrowed his choices for college to two: Yeshiva University, a modern Orthodox Jewish school in New York City, or John Carroll University, a Jesuit Catholic school in University Heights. The two couldn’t be more opposite, which made for an interesting decision.

“I was very close to attending Yeshiva University, but ultimately I decided to go to John Carroll,” Markovich said. “I grew up originally in University Heights, so I was always familiar with the university, and it always just seemed like a homey place to me.”

Being a Jewish student on a predominantly Jesuit Catholic campus, Markovich said he had no idea what to expect when he first started attending the university.

“As I kind of became comfortable here I felt very welcomed,” he said, “especially with finding fellow Jewish students and all the students here that are so interested in learning more about Judaism and what Judaism entails, because they’ve never really had the opportunity to interact with somebody who is Jewish. It's been a really wonderful experience.”

Bringing a Jewish perspective to campus has been beneficial for Markovich. Last summer, he was one of seven John Carroll students selected to attend the National Jesuit Student Leadership Conference in Santa Clara, Calif.

“It's crazy when you look at it,” said Markovich, laughing about a Jewish student being sent to a national Jesuit conference.

During his five days at the conference, Markovich interacted with students and professionals from a variety of backgrounds. Students were encouraged to submit proposals to lead workshops at the conference, so Markovich decided to submit two: one based on the Jewish concept of judging others favorably and the other on the concept of tikkun olam (repairing the world). Both were accepted, and Markovich taught others about Judaism as he led both workshops.

“I think the fact that a Jewish student has been able to achieve this at a Catholic university, it speaks volumes about the university,” he said. “Any time I'm able to educate other students on what Judaism is all about and Jewish culture, it makes me happy.”

John Carroll had never had a Hillel chapter on its campus – that is, until Markovich became a student.

“When I was in my freshman year, I started realizing that I wanted to make a difference on campus,” Markovich said. “I knew that John Carroll is in a predominantly Jewish neighborhood and I figured that I couldn’t be the only Jewish student here. The Jewish students had no outlet to relate to one another, to get together.”

Students would often ask Markovich about Judaism and what it's like to be Jewish. As he saw the interest growing, he decided to take a shot at starting a Hillel chapter on campus.

During his freshman year, Markovich took a composition class with Gail Arnoff, a Jewish adjunct professor of English. Markovich contacted Arnoff saying he was interested in starting a Hillel on campus.

“I laughed and said, ‘You have to be kidding me, John Carroll?’” Arnoff recalled. “I was certainly thinking this sounds nice but it won’t happen, or it’ll happen and won’t go anywhere.”

Despite her skepticism, Arnoff agreed to be the faculty sponsor of the Hillel chapter. Markovich persevered, and after meeting with representatives from the Cleveland Hillel Foundation and Jewish professors, and after getting feedback from his friends, Hillel officially became recognized as a Jewish student organization at John Carroll in 2011.

With Hillel so recognized, the hard work was done, but Markovich still wasn’t sure how other students would react to having a Hillel on campus.

“I just didn’t know how it would be received. I was already at that point more or less familiar with the university and I felt very welcomed, but I didn’t know if people would actually come or participate,” he said.

Turns out Markovich had little reason to worry. This year the Hillel has about 35 Jewish students who are members, and hundreds of both Jewish and non-Jewish students attend his events throughout the year.

“All of our programs aim to educate but in a fun and unique way,” Markovich said. “We get a lot of interest from non-Jewish students. A good portion of it is about spreading awareness to those who are non-Jewish.”

Markovich has remained president of Hillel for the past three years and has been the creative force behind planning events and bringing in speakers. The experience has proven invaluable.

“It’s developed myself as a leader, one that’s not afraid to take initiative and to not be afraid to express what I’m passionate about,” he said. “It’s also developed a deeper appreciation for my Judaism.”

“David is very creative and certainly a go-getter,” Arnoff said. “I’m absolutely amazed by what he has done in these few years. He started from absolutely nothing and has really pushed it along.”

Now in his senior year, Markovich must identify a successor to take the reins after he graduates in May. Although he won’t be on campus come next year, Markovich has left a lasting impression on the organization and on the university.

“Jewish student life and knowledge of Judaism is thriving like it never has before on John Carroll’s campus. I want Hillel to remain a force on campus for years to come; that’s my goal,” he said.

Once he knew he would be attending John Carroll, he sent an email to administrators at Menorah Park Center for Senior Living in Beachwood, explaining the work he had done at Montefiore and that he would like to do even more.

“Transporting wheelchairs is a great thing to do – it’s still a mitzvah – but I wanted to do more. I felt like I had more to offer,” he said.

Markovich soon received a response from Wiggins Place, an assisted living community on Menorah Park’s campus. He was called in for an interview and given a time slot to plan his own programs and activities with the residents.

During his time at Wiggins Place, Markovich implemented a current events discussion, led services, designed a handful of intergenerational activities and served as interim life enrichment coordinator when the regular coordinator was on maternity leave. Due to a busy senior year, Markovich has taken a hiatus, but Wiggins Place will always be a part of his life.

“My heart is at Wiggins Place because I discovered I really enjoy working with the elderly,” he said.

Markovich is pursuing a bachelor's degree in sociology with a concentration in aging studies. After he graduates, he hopes to pursue a master’s degree in gerontology.

As for a career, Markovich said he would like to work with the elderly in a social context and continue his Jewish outreach. But for Markovich, a job is so much more than just a steady income.

“My ultimate goal is to make a huge difference wherever I go,” he said. “I’m not just interested in getting a job and being content, I want to go beyond that and make a significant impact on the world. I want to contribute whatever I can to the Jewish community and to the world.”