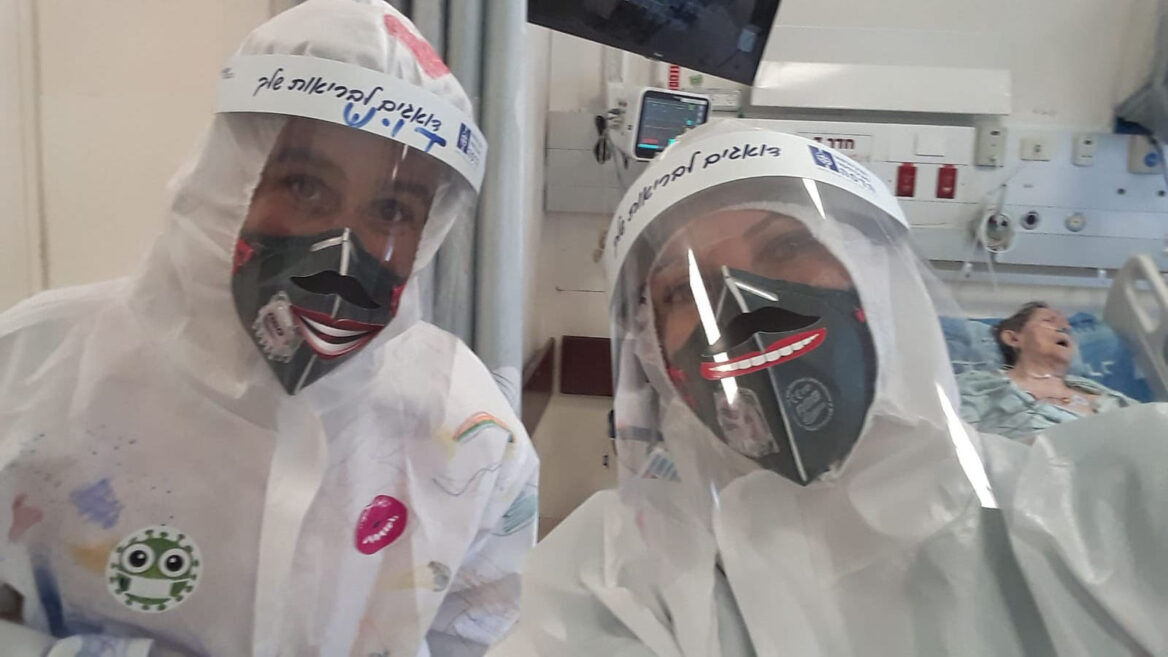 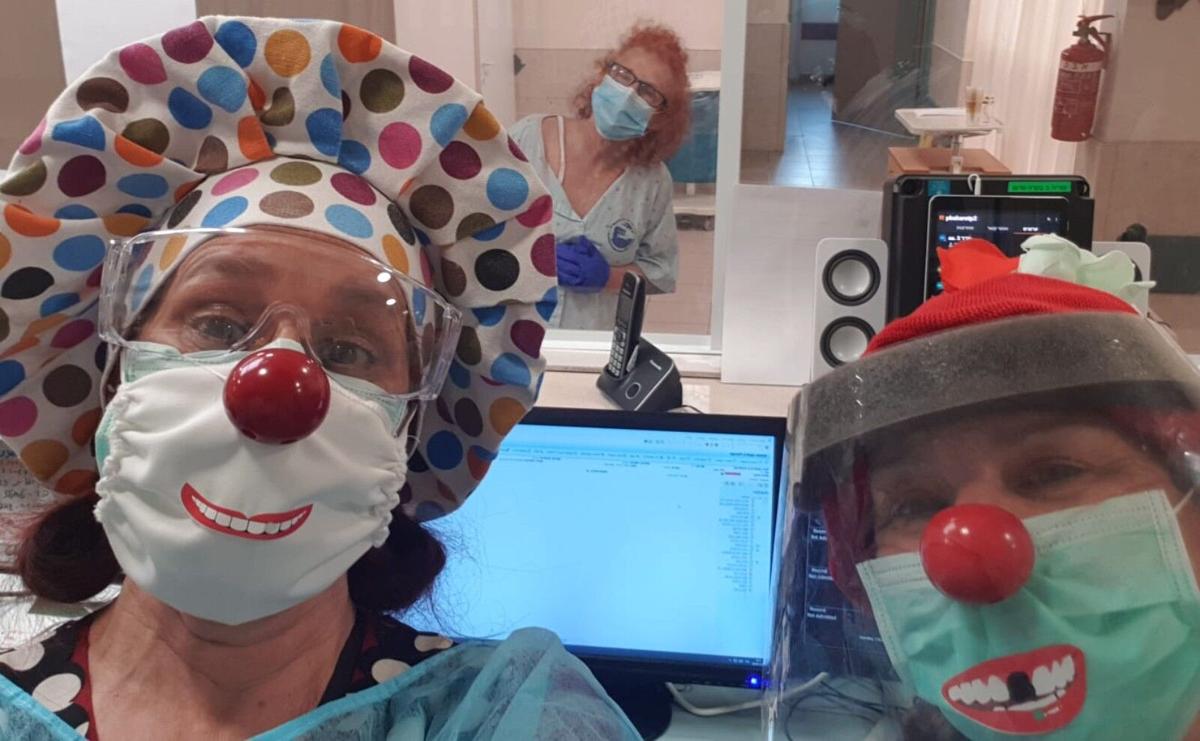 Arizona resident Carrie Mork contracted COVID-19 while touring Egypt in March. Her symptoms began shortly after her group got to Israel. For the next month, she was in a hospital near Tiberias, far from everything familiar.

The doctors and nurses at Poriya Medical Center saved Mork’s life. What saved her sanity were the Dream Doctors therapeutic clowns on Poriya’s staff.

On her second day in the hospital, Mork was asked to come to the window separating the patient area from the medical monitoring area. She saw two clowns waving at her.

“She looked at us, a bit puzzled, and picked up the telephone on the other side,” said Shoshi Ofir, aka Dr. Hearta, who’s been working as a medical clown at Poriya for 16 years.

“She asked us if we speak English. I said yes, and she said, ‘What a relief. I need help with something, and I don’t know who to talk to.’

“It’s not that nobody on the staff spoke English. But she felt more comfortable turning to us because no matter the condition of the patient, the clown’s situation is always worse,” said Ofir, referring to the zany appearance that makes a medical clown a purposely unintimidating member of the medical team.

Next day, when Ofir and another Dream Doctor came to the window, “Carrie almost ran to us. We could see her smiling despite her mask. We played music over the loudspeaker and she was dancing with us on the other side of the window.”

Now recovered, Mork said: “Having the clowns there was really uplifting and gave me something to smile about when I was just not feeling well. Their laughing and acting silly gave me something to look forward to and brightened my day. Shoshi even found out the state song of Arizona and played it for me so I would feel like I was home.”

Dream Doctors Director Tsour Shriqui said Israel is the only country where medical clowns are still working regular shifts in hospitals since the coronavirus outbreak, and directly with COVID-19 patients.

“Here in Israel, so far only a few hospitals have allowed it, but we expect more to follow. It’s very trailblazing,” he said.

Red nose behind the face shield

18 years and has participated in many humanitarian missions abroad.

In June, Hadassah’s management trained Barashi in personal protective equipment and hygiene protocols to enter the corona ward. Until then, he and other staff Dream Doctors had been interacting through a window, as Ofir did at Poriya.

“As far as we know, I was the first clown in the world to go inside a corona ward,” Barashi said.

He created his own COVID-19 clowning protocols.

“It’s about how to be unique with the mask and the PPE so people understand this is a clown when the silhouette of the clown has disappeared,” he said.

“It’s important for a clown to look unique so people can look at you and laugh. Only then can you start to make a change.”

As the video below shows, Hadassah’s Dream Doctors decorate their PPE with stickers and wrap an adult diaper around their coveralls to look extra ridiculous and non-threatening. Below the cuffed coveralls peek outrageously loud socks and clown shoes encased in disposable covers.

“People know immediately something is wrong with this guy. And then they see the red nose on the N95 mask behind the plastic face shield, and they smile,” Barashi said.

“I use the same techniques with corona patients as in any hospital or disaster zone – a positive dynamic where your body is in a tight balance while you’re playing an imbalanced person,” Barashi said. “But you have on two masks and a plastic screen, so you need to create communication with people essentially in a huge box. I have to bring a lot of energy to break the walls. I need to speak louder so they can hear me, and I do that in a funny way. We use a lot of black humor with corona patients. It’s all about changing how we look at the reality, through a comic filter. Then we can communicate freely and start talking about anything and everything.”

Since June, the Hadassah Dream Doctors have been ending their day’s shift in the corona ward three times a week, two at a time, and have cheered more than 100 patients.

Ofir and three other Dream Doctors at Poriya began working inside corona patient rooms on October 1 at the request of the head nurse, who saw how therapeutic the window visits were.

“The nurse said that some patients deteriorate although their vitals seem fine, and it can be the emotional state that brings them down,” Ofir said. “They saw that the patients were much better after our visits.”

So were the staffers.

“Often we felt we were there for the medical team as much as for the patients,” Ofir said.

Like Barashi, Ofir developed situation-specific protocols. Even little things must be done differently – like waving the bubble wand instead of blowing into it.

“One of the major issues was to create an intimacy with the person while staying at least 2 meters away, wearing a mask. At our staff meetings, we focused on ways to make the physical distance somehow feel smaller. One thing we did was play music that we both could enjoy.”

Ofir recalled preparing to enter the room of a corona patient who’d suffered a miscarriage and surprisingly tested positive for COVID-19 upon her hospital admission.

“It was so frightening on top of everything else she was going through,” Ofir said. “So we walked in her room and said, ‘You look great.’ And she said, ‘I recognize your voice.’ It turns out she was a nursing student. I give a one-hour lecture each year to nursing students, and somehow she remembered my voice.”

After about 15 minutes with the Dream Doctors, the patient said to Ofir, “Wow, you told us about medical clowning but now I feel how it really works.”

Ofir came upon another patient having a video call with her kids. She was speaking in Arabic, but it was clear that the mood was “emotional and sad. So I just started singing and dancing and asked her to turn the screen toward me, and I saw all her kids get up and start dancing with me. Her face lit up and the whole mood changed.

“And when you’re in a better mood you breathe easier and everything feels better.”

After Carrie Mork went home, she and “Dr. Hearta” had a video call. “It was the first time we saw one another without masks. We talked for an hour,” Ofir said.

Mork then messaged the Dream Doctor: “I wanted to tell you how healing your phone call was. When I left the hospital, I still had a lot of leftover emotions and our call helped to release them. … Keep being a clown. You are needed and loved.”