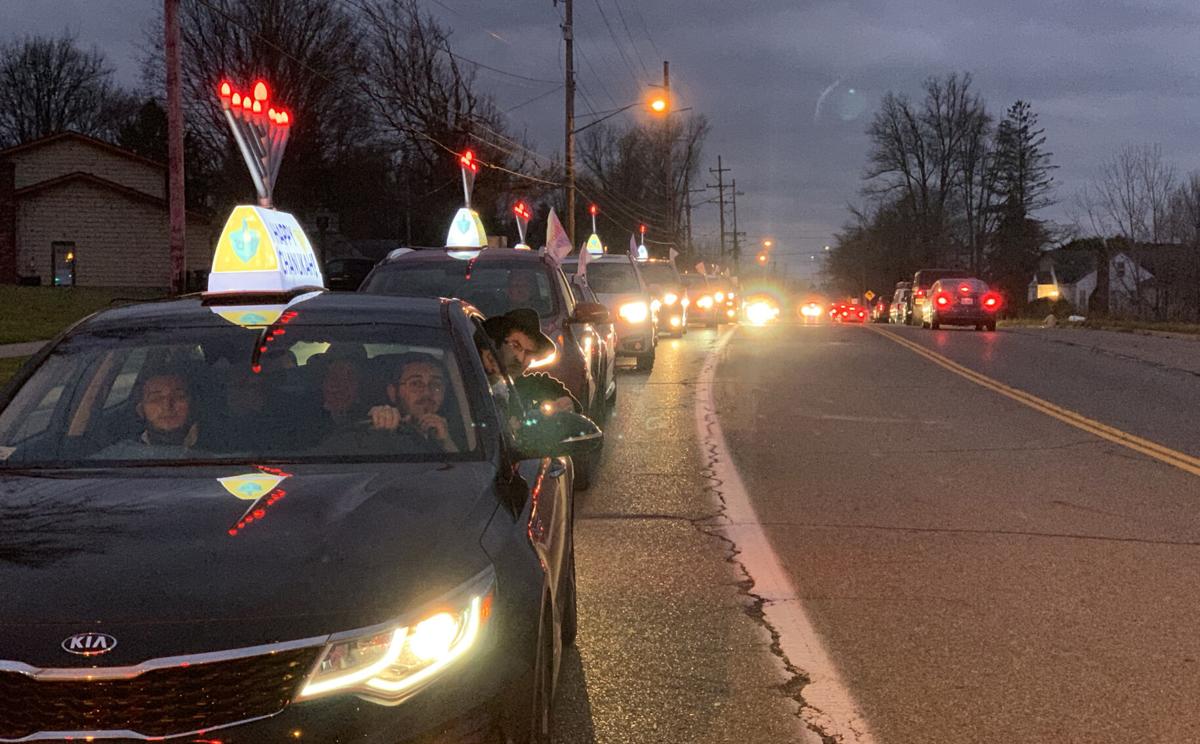 Dozens of vehicles with menorahs on top parade through the streets of Akron. 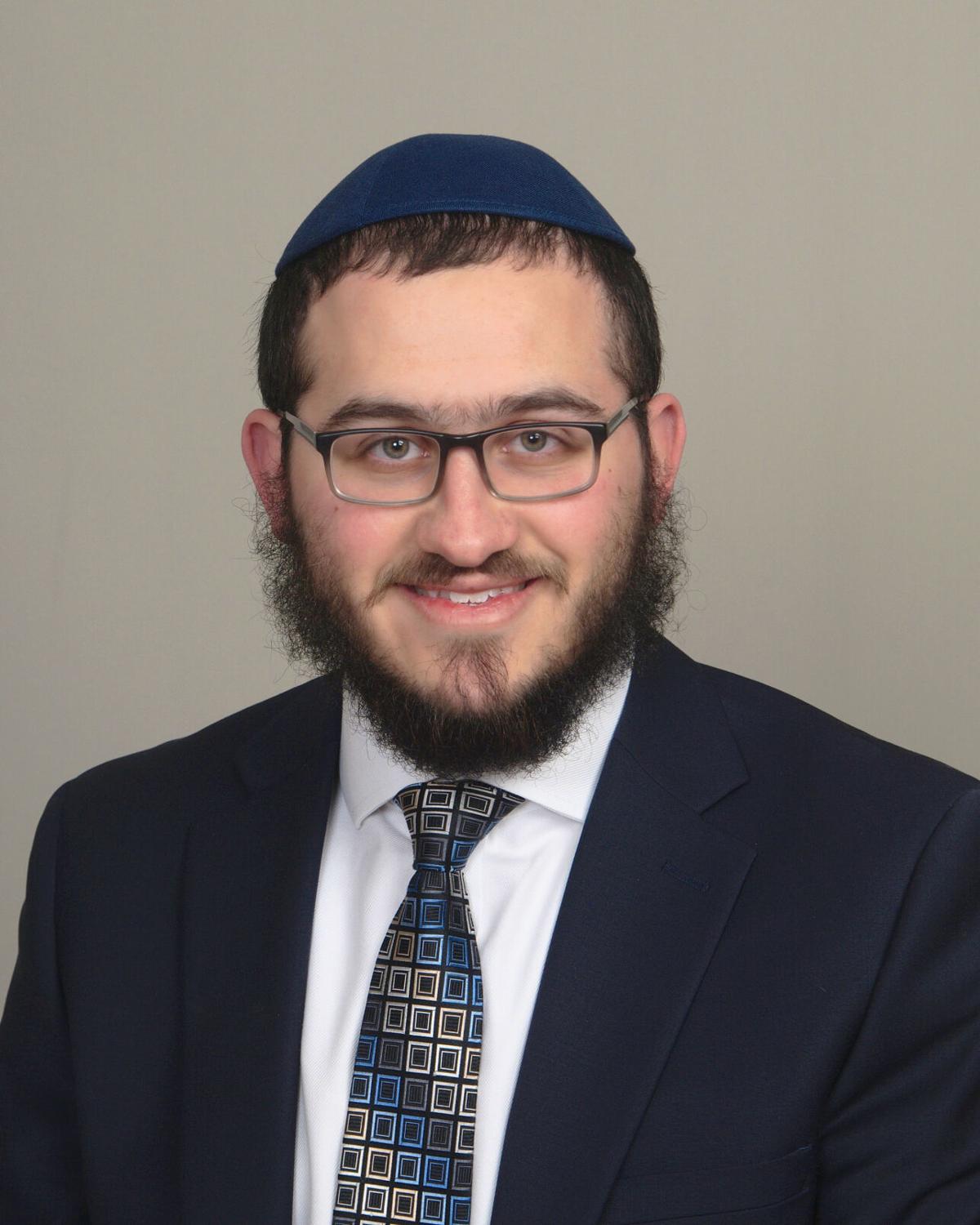 On Dec. 14, a parade of 30-plus vehicles with menorahs on their roofs cascaded through the streets of downtown Akron, spreading the message of the Festival of Lights in the city’s first Chanukah parade.

A project of Chabad of Akron-Canton, the parade brought together local synagogues, Shaw Jewish Community Center in Akron and other organizations.

The late Rabbi Mendy Sasonkin began driving around with a menorah strapped to the roof of his car in 1989, which was an early conceptual idea for the 2020 parade.

“I know Chabad does a Chanukah parade in Cleveland, but this is the first time Akron has ever done anything,” said Rose Wilcher, an Akron resident who attends Revere Road Synagogue in Bath Township, one of the participating synagogues. “And to personally experience, 31 years ago, this new rabbi showed up at my house. People thought he was crazy, probably.”

Wilcher said she may have witnessed the birth of the Akron Chanukah parade in 1989, when Sasonkin, of Revere Road Synagogue, pulled into her driveway, blaring Hebrew music from his car stereo with a menorah affixed to the roof to bring her children some festive cheer. Since his death in 2018, his son, the Rabbi Moshe Sasonkin who succeeded him at Revere Road Synagogue, has worked to continue the tradition.

Wilcher, a mother of two who contacted the Chabad after hearing about the rabbi’s menorah car topper, said the surprise appearance made a big impact on her children, Salomon and Aviva, who often felt disconnected from their peers at Portage Path School in Akron, being from an interracial family and practicing a faith that was rare in the area.

“My kids being multi-ethnic, in their mind back then as young children, all the Jews lived in Cleveland,” Wilcher said. “So, they were the only Jewish children in their entire school. I thought maybe they’d send them a coloring book or something. My husband and I were sitting in the house, and then all of a sudden I start hearing super, super loud Hebrew music. And I looked outside and there was a man and woman in my driveway with a menorah on the roof (of their car).”

That started a lifetime of friendship between the Wilcher and Sasonkin families, after the rabbi’s wife invited them over to the Chabad house, a place Wilcher said she still frequents with her children on Saturday mornings.

It turns out, the menorah parade idea was pioneered by early Chabad emissaries like Moshe Sasonkin’s parents, who started the Akron-Canton Chabad and employed tactics like car top menorahs and holding public menorah lighting ceremonies to spread the message of Chanukah.

“My parents were sent as Chabad representatives for the Jewish community in the Akron-Canton area,” said Moshe Sasonkin, who founded Chabad at Kent State University in 2017. “When my parents moved to town in 1989, they had their menorah-topped car, which was a classical Chabad way of taking the message of Chanukah and putting it out there and spreading the light.

“I’ve been in other areas growing up and as a student where we’ve run different menorah parades with cars. I don’t think we’ve ever done a parade in Akron, and this year, since it was COVID, we felt it would be a good time to do that. We started at the JCC and drove down Main Street here, West Market and we went until the Revere Road Synagogue.”

In spite of the public health crisis, Sasonkin said the synagogue has held more public Chanukah celebrations this year than in past years, all while keeping social distancing standards. For example, they were able to livestream their 13th annual large-scale menorah lighting ceremony directly from Summit Mall this year, instead of holding it in person, as well as holding a virtual latke cooking class via Zoom.

“We went and did neighborhood parties, we took those all the way out to the Solon-Orange area where we have friends from our community that live there,” Sasonkin said. “And of course, the Akron/Canton area. We brought a 4-foot menorah, lit the tiki torches and had a little Bluetooth speaker playing Chanukah music.”

Through these efforts, the rabbi said Revere Road Synagogue is hoping to extend the same sense of community that his parents did when they visited the Wilcher family household 31 years ago.

“For me,” Sasonkin said, “carrying on my father’s legacy is to make it bigger and better. I know that’s what he wants.”

Sasonkin said Revere Road Synagogue will continue to think of ways to connect with the Akron Jewish community virtually.

Collin Cunningham is a freelance writer from Cleveland.