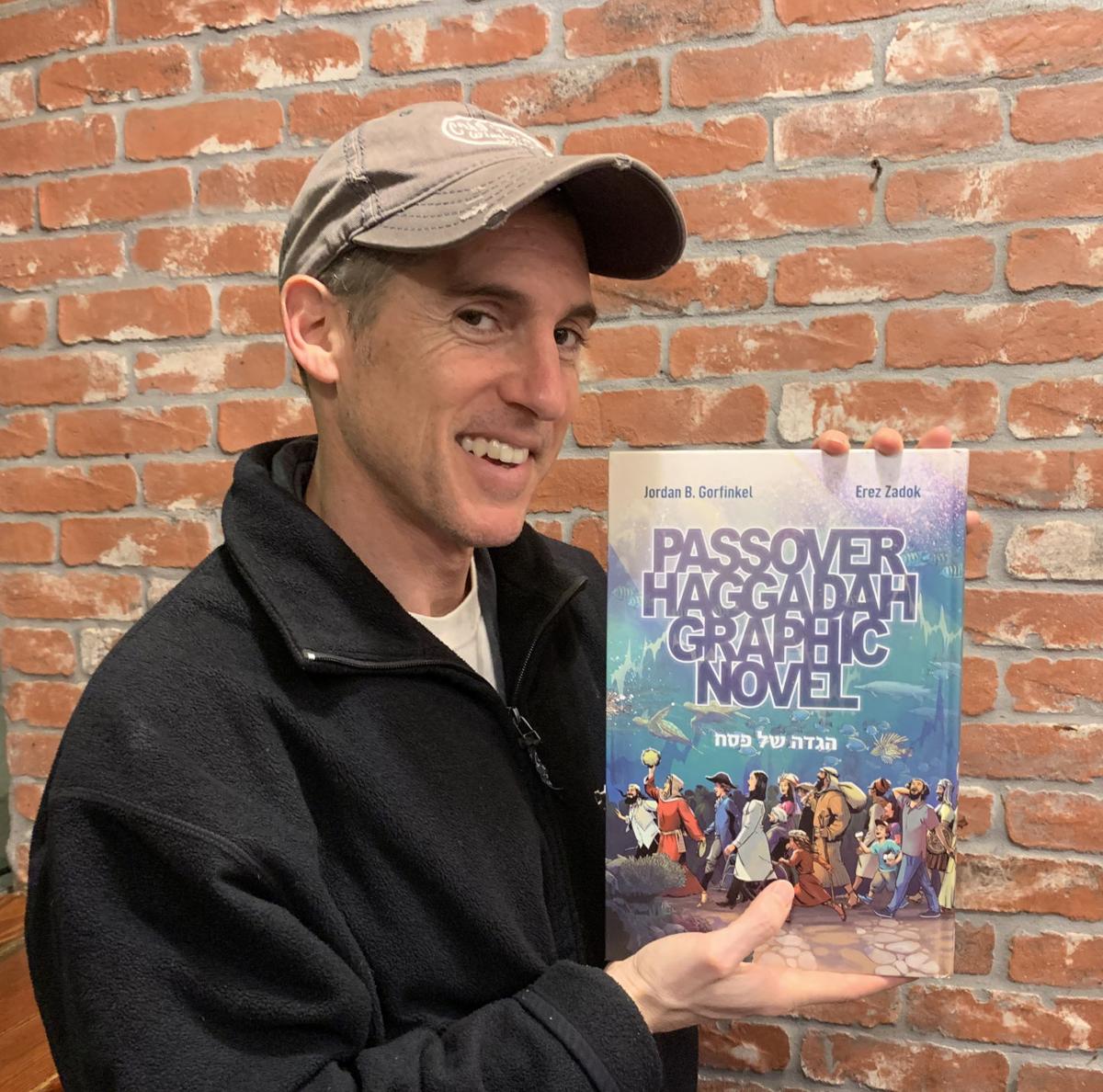 Jordan B. Gorfinkel holds a copy of the book he wrote, “Passover Haggadah Graphic Novel.” 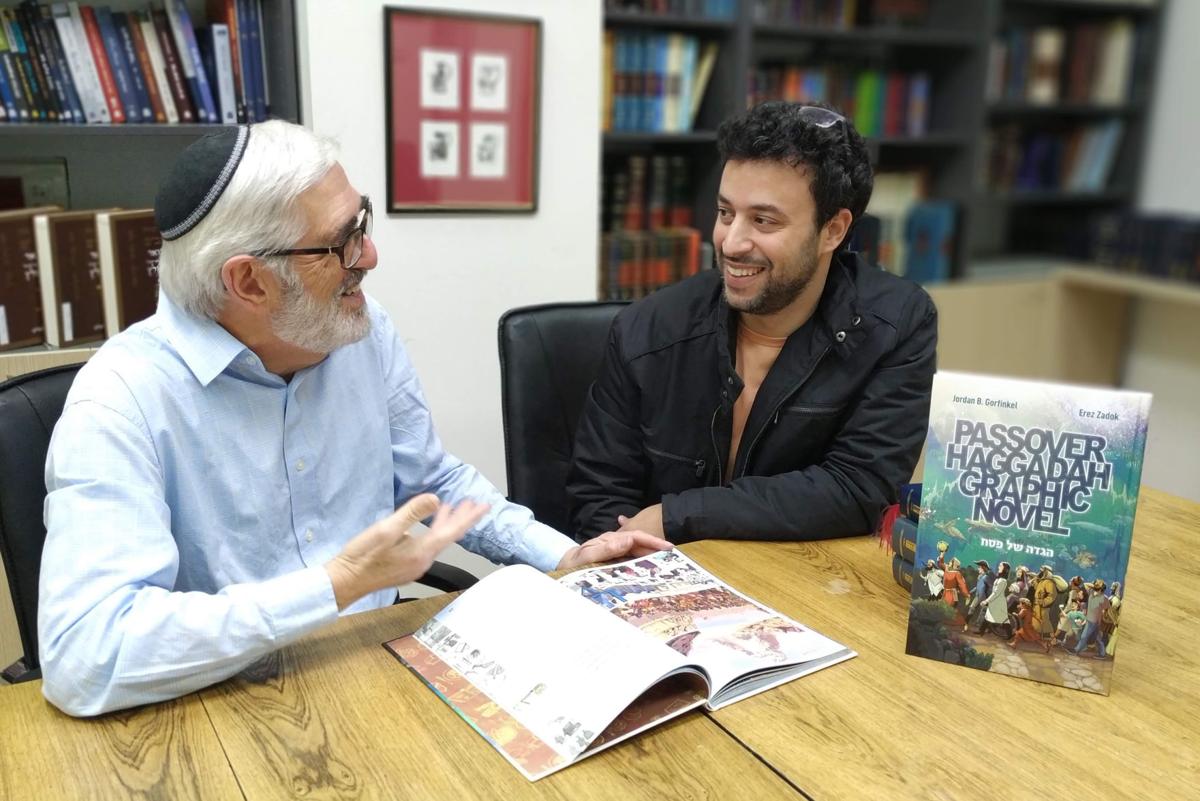 Jordan B. Gorfinkel holds a copy of the book he wrote, “Passover Haggadah Graphic Novel.”

While Jordan B. Gorfinkel moved nine times as a child, his Jewish holiday celebrations remained fixed.

Seders were held in Miami Beach, Fla., with relatives who lived there year-round. Gorfinkel stayed with family and attended services at local synagogues.

“We had the most wonderful, impactful memorable sedarim,” said Gorfinkel, a resident of University Heights and member of Green Road Synagogue in Beachwood. “We had all the cousins together and grandparents, and it was nonstop singing and, of course, the elders were bickering, and playing and acting and eating. It was everything that you want a seder to be. To this day, I continue to model my own Passover experiences on that.”

Gorfinkel, who is a cartoonist, musician, writer and producer, said a colleague’s question inspired him to incorporate a graphic novel with the text of the haggadah.

“He basically said, ‘Why don’t you do a haggadah for someone like me?’” Gorfinkel’s colleague asked. “So, in other words, somebody who’s big into nerd culture or geek culture and who is not a religiously observant Jew, but has a passionate Jewish soul. So, in other words, somebody who maybe doesn’t have the command of Hebrew or the institutional knowledge of ritual and would like a guide a that is both accessible and engaging.”

With illustrations by Israeli artist Erez Zadok and translations of the text of the haggadah from Hebrew by David Olivestone, “Passover Haggadah Graphic Novel” took about three years to complete and included a team of 17 people, including four rabbis.

“The vast majority of this book is from source material,” Gorfinkel said. “We’re adapting the (haggadah) unabridged, and that’s by design.”

Gorfinkel connected with Zadok through another Israeli illustrator, who recommended him.

“When you see artwork on Jewish subjects drawn by people who do not have Jewish backgrounds, it feels like something’s off,” he said. “I wanted to avoid that. The best way to do that is let’s get a guy or a gal who is right in the middle of it, totally authentic.”

Authenticity in every aspect was important to Gorfinkel, who even enlisted a scholar of armaments for the project.

Zadok and Gorfinkel worked both remotely and in person on the book.

In a March 6 webinar with American Jewish Press Association newspapers, Zadok, who grew up in an Orthodox family, said the project appealed to him because he didn’t understand the haggadah as a child and wanted to make this version more accessible. He puts out the weekly “Bundle of Joya.”

During the webinar, Gorfinkel discussed the process.

“We figured it out by working on the magid section, the storytelling section and then working our way outwards towards a framing sequence that made the entire haggadah into a narrative whole,” he said. “It was really important to all of us that everybody be represented in this book.”

Olivestone, in the same webinar, explained the challenges of the project for him.

“People say that every translation is a commentary, but translation can only do so much, and that’s why there are so many commentaries out there,” Olivestone said. “There were many challenges in trying to get that (contemporary English translation) to happen. Hebrew syntax is not the same as English syntax, and sometimes you have to change the order of the words or move sentences around.”

Zadok said he was first inspired by “The Lion King.”

“And when I realized how hard it was to be an animator and realized I could tell a story, a sequential story in comics … this was my true passion.”

Gorfinkel studied many versions of the haggadah as part of his research. His favorites are edited by Rabbi Yosef Zvi Rimon, David Arnow and Noam Zion.

These days, Gorfinkel no longer celebrates Passover with his relatives in Miami Beach. For the third year, he is leading a communal seder for about 150 people in the Blue Ridge Mountains of Georgia. His a capella group, Kol Zimra, will take part in an interactive performance.

This year, for the first time, Gorfinkel will use his own haggadah as a source text at the seder table.

“I’m bringing every ounce of my background experience, creativity and passion to these seders, and I gotta tell you, when it’s done, I just collapse for the rest of the holiday because I just give it my all.”

Kirby Davis, an Editorial Intern at the Columbus Jewish News, contributed to this report.

CREATOR AND WRITER: Jordan B. Gorfinkel