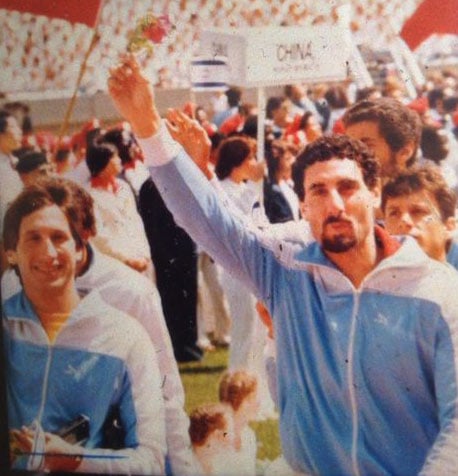 David Blatt, left, and Mark Sack take part in the opening ceremonies of the World University Games in Edmonton, Alberta, Canada, in 1983. The Israel men’s basketball team took sixth place in the games. 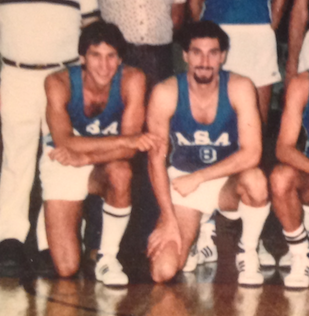 David Blatt, left, and Mark Sack take part in the opening ceremonies of the World University Games in Edmonton, Alberta, Canada, in 1983. The Israel men’s basketball team took sixth place in the games.

The Cleveland Cavaliers looked near and far during a five-week stretch for a head coach and they finally found their man – in Israel.

David Blatt, who coached Maccabi Tel Aviv to the Euroleague and Israeli league basketball championships this year, struck a deal to become the team’s 20th coach in history.

The selection was immediately celebrated by Greater Clevelanders Tamir Goodman and Mark Sack, and one of Blatt’s former players, David Blu, who all know Blatt well.

Goodman, who was dubbed the “Jewish Jordan” in high school by Sports Illustrated, was drafted by Blatt to play for Maccabi Tel Aviv in 2002 but wound up being traded before the season.

“It’s just absolutely incredible for the Jewish people and for Israel,” Goodman, 32, of University Heights told the Cleveland Jewish News on June 20. “It’s a continuation of his successful career in Israel. I think sometimes people think being Jewish or being a proud Jew keeps you from reaching the highest level in your career, but it’s the exact opposite. He’s a proud Jew and a proud Israeli, and he’s been able to really show the world being a proud Jew and being proud from Israel is nothing to be ashamed of.”

Sack, an Orange resident who was a standout basketball player at Cleveland Heights High School and four-year starter at NCAA Division III Brandeis University in Waltham, Mass., played against Blatt in Israel’s professional league. They became close friends when they played together on the Israeli team that represented Israel in the World University Games in Edmonton, Canada, in 1983.

“David was a great point guard as a player who brought out the best in the players around him, and he does the same as a coach,” said Sack, 55, in an email from Israel. “I believe he will help bring out the talent that the Cavs are putting together, and with an emphasis on ‘team play,’ Cleveland fans will enjoy the style and success of the team.

“The fans will appreciate his intensity and his straightforwardness, but more importantly will enjoy the high level of teamwork and winning attitude of the players as together they produce a ‘winner’ for the city.”

Blu, who played for the championship Maccabi Tel Aviv team, told the CJN from his home in Los Angeles on June 20, “I’m extremely excited. This is a dream for David to have the opportunity to coach in America. He’s certainly qualified to take on the challenge.

“When I was going to play college basketball, a good way to tell about a program is if players came back and were hanging out at college,” said Goodman, who was recruited by the University of Maryland in College Park and ended up at nearby Towson State. “Every player who played for him expressed in the media how good he is. He’s coached all over the world, in Turkey, in Russia, in Israel.”

Goodman said Blatt has been successful at handling diverse rosters.

“Players who played for him come from diverse cultures and he’s been able to mesh them. That’s a big plus for him. He’s got those incredible interpersonal skills,” he said. “Another advantage is there is more pressure to coach in Europe. You play fewer games. In the NBA, it’s 82 games. In Europe, you play one or two games a week. There’s no college basketball in Europe. You could have a longtime veteran who’s 30 or 31 years old and literally have a 16-year-old on the bench. He has a lot of experience working with the age gap.

“We’re seeing a lot of college players who are one-and-done coming to the NBA,” said Goodman, referring to players who play only one year of college basketball before entering the NBA Draft. “He’s used to dealing with younger players. If you look at the (San Antonio) Spurs, who won the (2014) championship, other than Tim Duncan, it wasn’t like they had big, big stars coming into the program. Coach Pop (Gregg Popovich) developed their skills to play as one unit. Coach Blatt is the same. He didn’t have the most individually talented players, but they came together as a unit. He has everything you hope for in a coach. Now he’s coaching in the best league in the world.”

Blu, 33 and considered one of the top Euroleague 3-point shooters, said Blatt would have some immediate challenges.

“Coming in, he has to learn the culture, learn the new players, learn a new city,” he said. “David’s the kind of guy who loves those challenges and will … help the club win.”

Sack played for Hapoel Gan Shemuel in the Israeli league from 1980 through 1989.

Sack, a teacher in the Cleveland Heights-University Heights School District, said he likes “Blatt’s fresh approach, his international experience and his ability to connect with players. I think that Cleveland is attractive to him because of the combination of young players and ownership and management who are committed to building a winner through player development and attracting a key free agent or two.”

Sack and Blatt also have a very special relationship.

“David was a great point guard, but the best assist of his career was a non-basketball one,” Sack said. “He helped introduce me to my wife-to-be, Aviv. That was 31 years ago and it’s still a winner.”

Sack communicated with Blatt just before he came to Cleveland to be interviewed for the job.

“I wished him well and told him there’s a lot of love waiting for him in Cleveland if he ends up taking the job,” Sack said.

Former Maccabi Tel Aviv coach David Blatt has been hired as the next head coach of the Cleveland Cavaliers, according to David Pick, senior co…