Jews and Arabs gather in annual Sukkat Shalom in Judea

Israeli PM Naftali Bennett to American Jewish leaders: ‘We have to redesign our relationship’

The Sept. 13 meeting between Israeli Prime Minister Naftali Bennett and Egyptian President Abdel Fattah El-Sisi in Sharm El-Sheikh in the Sinai Peninsula is a dramatic public encounter on Egyptian soil that signals a new alignment of interests during a complex historical junction.

According to international media reports, former Prime Minister Benjamin Netanyahu had visited El-Sisi in Egypt secretly in the past. But the decision to publicly invite an Israeli prime minister means that the Egyptian president felt comfortable enough to frame the visit as a legitimate effort that serves his nation’s interests, in spite of the anti-Israeli sentiment that is common among large sections of the Egyptian public, according to Moshe Albo, a senior researcher in the Institute for Policy and Strategy at IDC Reichman University in Herzliya.

Albo, a retired lieutenant colonel from the Israel Defense Forces who served as the head of an arena in the research division in the Military Intelligence Directorate noted in a recent Hebrew-language paper that the invitation is “a public gesture that illustrates the promotion in ties and strategic connection between the states in light of challenges and sensitive issues.” However, the invitation does not, he warned, signal an Egyptian willingness to promote normalization or to extend bilateral ties into new levels of economic, civilian and cultural cooperation.

According to a statement released by the Bennett’s office, the two leaders discussed a series of topics, including “ways to deepen and strengthen cooperation between the states, with an emphasis on broadening mutual trade, and a long series of regional and international issues.”

Before boarding an aircraft to return to Israel, Bennett said “the meeting was very important and very good. During the meeting, first and foremost, we create an infrastructure for deep continued connections.”

One key motivating factor behind El-Sisi’s decision to host Bennett is the Egyptian concern over a possible downgrade in relations between Cairo and Washington.

This week, the Biden administration reportedly decided to hold some aid money from Egypt. According to a report by Politico, citing an American official, the Biden administration “has decided it will hold back some, but not most, of $300 million in conditioned military aid to Egypt over human-rights concerns” while “the money that is being sent will also have restrictions on its use.”

The United States provides Egypt with $1.3 billion in annual military aid with Congress conditioning $300 million of that money on human-rights issues.

“The U.S. official said the administration planned to give $170 million of the $300 million to Egypt, but would withhold the remaining $130 million until the Egyptian government met unspecified human-rights conditions,” the report said. “The $170 million, however, can be used only for certain functions, such as counterterrorism, border security and nonproliferation.”

Albo noted that there are growing fears in Cairo about U.S. policy becoming increasingly shaped by a criticism of human rights, and American and anger at budding Egyptian-Russian ties, leading to more funds potentially being withheld. As a result, Cairo is keen to signal to Washington its centrality in regional stability, and the meeting with Bennett certainly helps sends that message. 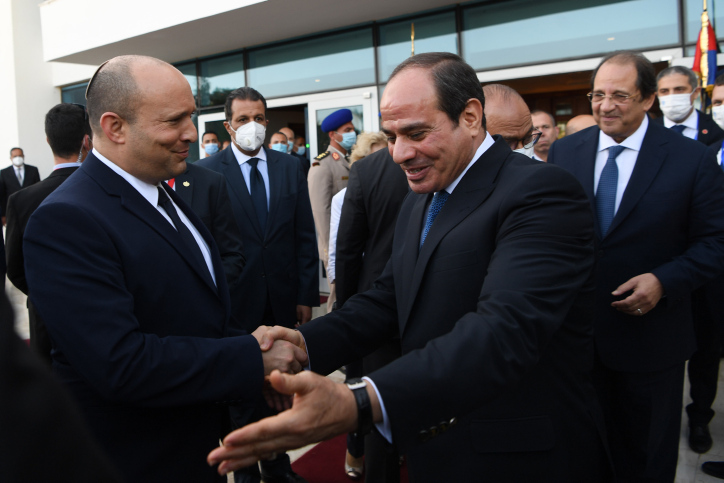 The need to push back radical jihadists

During their meeting, Bennett and El-Sisi likely discussed a range of top priority issues, starting with the escalation tensions between Israel and Hamas in the Gaza Strip, and the precarious situation in the Palestinian Authority in the West Bank.

Egypt’s interest is to promote political dialogue between Israel and the Palestinian Authority—a highly unrealistic prospect at this time—while also keeping the lid on Gaza and preventing it from exploding into a new round of armed conflict between Hamas and Israel.

In Gaza, Egypt’s chances of creating a longer-term calm are higher; this would, in turn, underline its regional leadership position.

Albo noted that in this context, there is growing potential for Israeli-Egyptian cooperation in preventing arms-smuggling from Sinai into Gaza and to block efforts by Hamas and Palestinian Islamic Jihad to build up their military-terrorist force. Hamas, it is worth noting, is a Palestinian branch of the Muslim Brotherhood movement, which the El-Sisi administration considers its No. 1 domestic enemy and a threat to Egypt’s future.

The security situation in the Sinai Peninsula remains a core issue for bilateral dialogue as well. Both Egypt and Israel have a clear common interest in beating back ISIS terrorism, and there is a great deal of room for cooperation on that front. Israel has in the past waived clauses of the Egyptian-Israeli peace treaty banning the entry of Egyptian forces into Sinai in order to facilitate Cairo’s war on ISIS.

The need to push back radical jihadists is even more acute as reverberations from the Taliban’s takeover of Afghanistan are felt throughout the region, providing a morale boost to Islamic extremists. 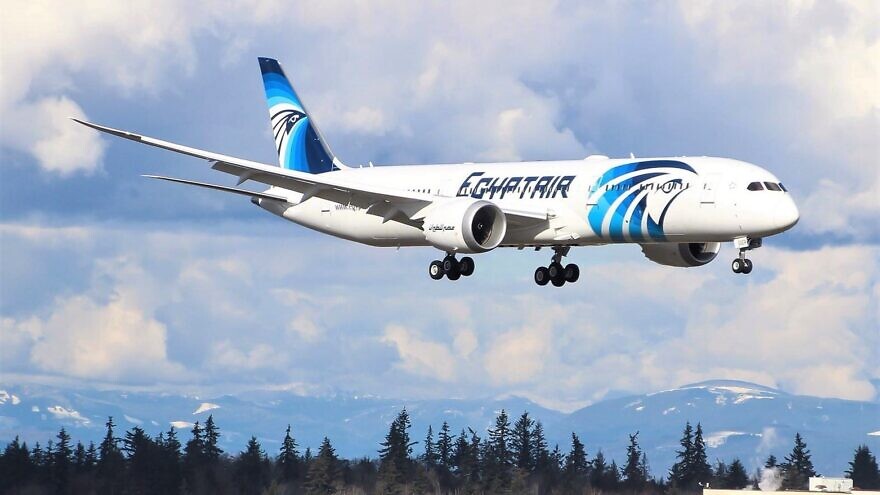 ‘A military figure through and through’

Meanwhile, Israel’s decision to decrease the warning level for tourists visiting southern Sinai has likely been warmly welcomed by Cairo, due to the boost in tourism that this could provide, coupled with new Egyptair flights to Tel Aviv.

At the same time, Egypt is facing a severe ongoing crisis in its standoff with Ethiopia over the African state’s decision to begin operating a massive hydroelectrical dam on the Nile. Egypt views this as a threat to its water supply and internal stability.

Albo noted that Egypt has called on Israel to support its position against Ethiopia. While Israel cannot get directly involved, he said, it could offer concrete assistance through sales of its advanced water desalination and irrigation technology to Cairo.

Maj. Gen. (res.) Amos Gilead, executive director of the Institute for Policy and Strategy (IPS), and former director of policy and political-military affairs at Israel’s Ministry of Defense, is intimately familiar with El-Sisi, his former position putting him in frequent contact with Israel’s neighbors.

“He’s a very important leader, a first-class patriot, a military figure through and through,” Gilead told Army Radio on Monday.

As the former head of Egypt’s Military Intelligence, former defense minister, and now president and supreme commander of the armed forces, El-Sisi is someone who “highly values the axis of defense and strategic cooperation, built with great labor, between Israel and Egypt,” said Gilead.

Egypt is a centerpiece of stability in the region, he argued, and a bulwark against strategic threats from dangerous actors ranging from Iran to radical Islamists.

“El-Sisi tried to create warm personal relations with Bennett in this visit, and he achieved this,” assessed Gilead. “He concluded that strategic route of Egypt-Israel cooperation serves Egyptian national security.”

The post Alignment of Egyptian-Israeli interests apparent in meeting of leaders on key regional issues appeared first on JNS.org.