The need to battle anti-Semitism and Holocaust denial, especially online, was front and center on Thursday at the Malmö International Forum on Holocaust Remembrance and Combating Anti-Semitism—Remember ReAct event in Sweden.

Representatives from more than 50 countries, in addition to NGOs, social-media organizations, Holocaust survivors and others attended the event hosted by Swedish Prime Minister Stefan Löfven. The forum was initially slated to be held last year but was postponed because of the coronavirus pandemic and worldwide lockdowns, which led to a radical increase in online hate, anti-Semitism and Holocaust denial—issues that were at the forefront of the conference.

“Over the past year-and-a-half, young people have been locked down and exposed 24/7 to online disinformation extremism and anti-Semitism,” said Moshe Kantor, president of the European Jewish Congress. “Never in history was a young generation so intensively brainwashed with conspiracy theories and lies, and at the same time, so unfamiliar with the tragedy of the Holocaust. …. Preventing young people from falling into extremism is one of the fundamental challenges of our time. But so far, the majority of our strategies have failed.

The need to combat hate online was also stressed by Kathrin Meyer, secretary-general of the International Holocaust Remembrance Alliance, who before the conference noted that “the mainstreaming of Holocaust distortion, often spread across borders via social media, is a serious challenge for us all globally as it paves the way for anti-Semitism, Holocaust denial and extreme nationalism. We are pleased to see global leaders stand in solidarity to pledge fresh commitments to fight this evil.”

Speaking to the media during the day, the Swedish prime minister said it was good that social-media companies have committed to increasing spending on combating anti-Semitism and pledged to stop hate speech on their platforms. Still, he added, like everyone who made pledges to combat Holocaust denial, hate and anti-Semitism during the conference, they would need to be held accountable.

Anti-Semitism and racism, Löfven went on to say, remain “threats to an open society and the principle of equal value of all people. But anti-Semitism differs from other forms of racism; [it] is in itself a conspiracy theory based on notions of Jewish powers and Jewish interest, and the secret desire to rule the world. It is a specific toxic form that drives conspiracy theories that … in its most extreme form resulted in the Holocaust.” 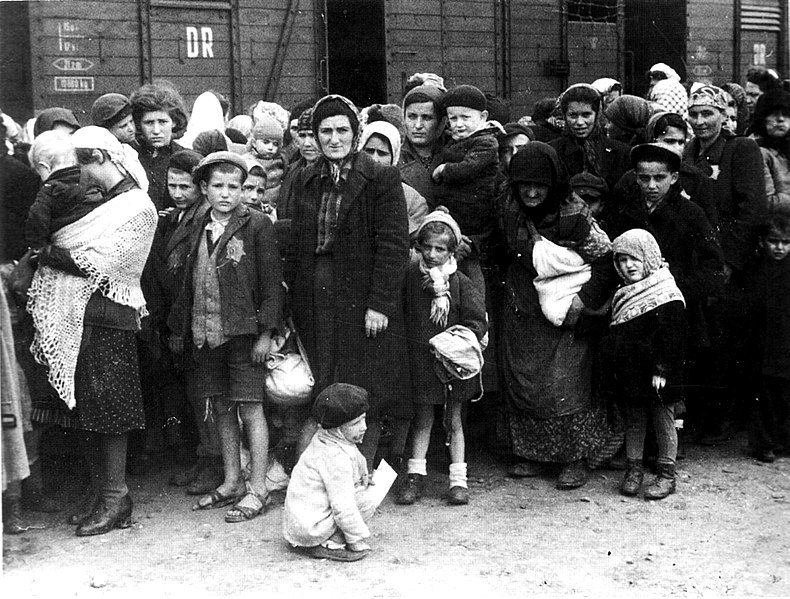 The arrival of Hungarian Jews at Auschwitz in the summer of 1944. Credit: Allgemeiner Deutscher Nachrichtendienst-Zentralbild (Bild 183), German Federal Archives via Wikimedia Commons.

‘The Holocaust did not begin with death camps’

Other Jewish speakers included World Zionist Organization chairman Ronald S. Lauder, who in remarks before reporters called out the United Nations for its hypocrisy on Israel.

“What we are looking at today is something we never believed possible after the Holocaust,” said Lauder. “After the Holocaust, no one wanted to be associated with Nazis. Three generations later, most young people have forgotten; what happens now is that anti-Semites have found a new way of attacking” Jews by attacking Israel and saying it should not exist.

“It is on social media, on college campuses, at the United Nations, all over,” he continued. “We are going to fight back hard and go into social media. We have to fight this not only for Jewish people but for all people. There should be no hate.”

He also noted that last year, the United Nations instituted “23 resolutions against countries—17 against Israel and six against the rest of the world—that says a lot about what’s happening.”

American Jewish Committee president Harriet Schleifer, whose parents were Holocaust survivors, addressed the conference virtually, saying: “We must be vigilant to the presence of anti-Semitism, however innocuous it may seem and in whatever form it may take. As Holocaust historians remind us, the Holocaust did not begin with death camps; it began with words.”

Israeli leaders also presented at the conference, including the chairman of Yad Vashem in Jerusalem Dani Dayan.

“Against the backdrop of the alarming rise in anti-Semitism worldwide, the Malmö forum provides an important international platform to raise global awareness of the need for Holocaust remembrance, as well as an opportunity for government officials and the world community to join forces in the fight against this destructive and age-old phenomenon,” said Dayan before his formal remarks to the plenary.

“It is Yad Vashem’s mission,” he continued, “to ensure that the voices of the victims and the testimonies of the survivors will remain accessible and relevant today and for future generations. Together with international partnerships, alliances and coalitions, these fundamental tools can help us push anti-Semitism back to the margins of our global society.”

Holocaust survivor Dina Rajs, who attended the conference, said the forum’s focus on action was appropriate. “We all need to react and act against anti-Semitism and other forms of racism, against those who say what happened to me and my husband, to our families and friends didn’t happen. … We need to react and act every day, and stand up for equal rights and the rights of all, and stand up for democracy.”