Tipping off new NBA season, Deni Avdija is looking to put ‘Israel on the map’

Three plans to deal with Iran’s nuclear program: Which one will go into effect?

The three followed up the meeting with a joint press conference, seated three abreast in the State Department’s Benjamin Franklin Room.

Blinken began the press conference by touting the accomplishments between the two nations, who were two of the first signees of the U.S. brokered Abraham Accords normalization agreements last year.

“The UAE-Israel relationship has, I think it’s fair to say, flourished this past year,” Blinken said. “This May, Israel opened an embassy in the UAE, the first it has ever had to a Gulf nation. And a few days ago, Israel’s new ambassador to the UAE presented his credentials. In July, the UAE opened an embassy in Israel, the first Gulf state to take that action.”

Blinken said that the Biden administration strongly supports developing relationships between the nations in the Abraham Accords and looks to expand the circle of countries normalizing relations with Israel in the years ahead.

“We believe that normalization can and should be a force for progress, not only between Israel and Arab countries and other countries in the region and beyond, but also between Israelis and Palestinians,” Blinken said. “As President Biden has said, Israelis and Palestinians equally deserve to live safely and securely and to enjoy equal measures of freedom, prosperity, democracy. The President has also been clear that a two-state solution is the best way to ensure Israel’s future as a Jewish and democratic state, living in peace alongside a viable, sovereign, and democratic Palestinian state.” 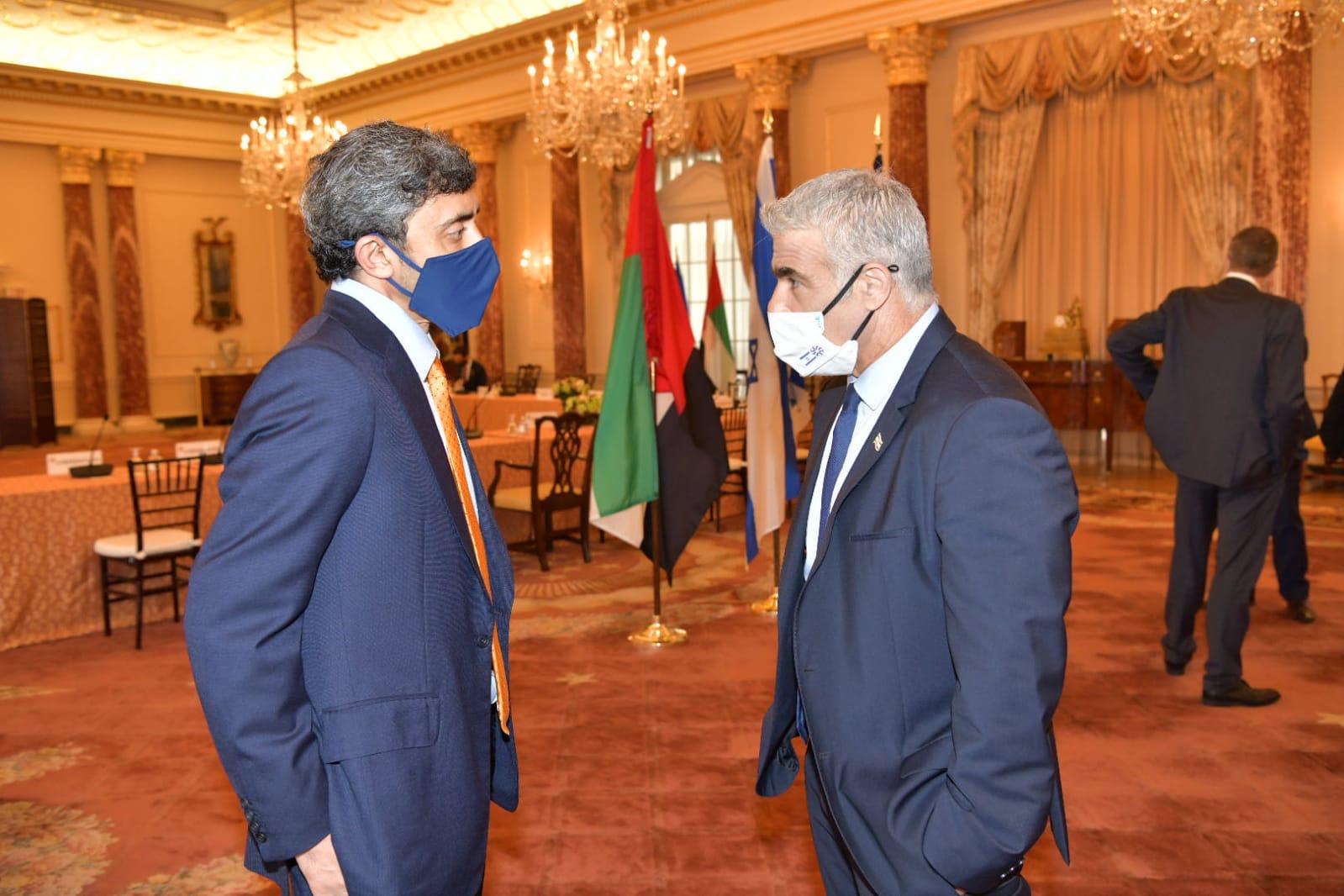 ‘I’m going to visit soon to meet a friend, but also a partner’

Two new trilateral working groups were launched during the meeting, according to Blinken, with the first group to focus on religious coexistence.

“This is a moment of rising anti-Semitism, rising Islamophobia, and we want Israel, the United Arab Emirates, and the United States to work together to build tolerance and ensure that all religious groups can worship in their traditional ways without violence, without intimidation, without discrimination,” Blinken said.

The second working group will focus on water and energy, which Blinken said are critical for all three countries in the face of climate change. He said he was pleased that Israel had joined the Agriculture Innovation Mission for Climate—a joint initiative between the United States and UAE to “catalyze new investment in climate-smart agriculture,” with Israeli and Emirati companies already planning collaborations on renewable projects.

Both the UAE and Israel have made pledges to cut down emissions by 2050—Israel by 85 percent and the UAE aims to reach net-zero emissions.

Lapid and Al Nahyan were optimistic about the Accords and their relationship calling each other friends, and Al Nahyan, when asked by a reporter about when he’ll visit Israel, said that Lapid had invited him to visit him in Israel during their meeting.

“Foreign Minister Yair was kind enough to invite me to visit Israel, and I’m going to visit soon to meet a friend, but also a partner,” Al Nahyan said. “We need to not only celebrate this relationship, but look at new venues of cooperation.”

“His Highness Sheikh Abdullah and I have become friends and partners. Our friendship is based on shared values, on moderation, on religious tolerance, on the importance of fighting terror and radicalization,” Lapid said. “The partnership is based on economics, progress, and technological excellence. This partnership isn’t just between Jews and Arabs, but between citizens of the world who want to be partners in the fight against climate change, against poverty, against the pandemic that has taken the life of millions.” 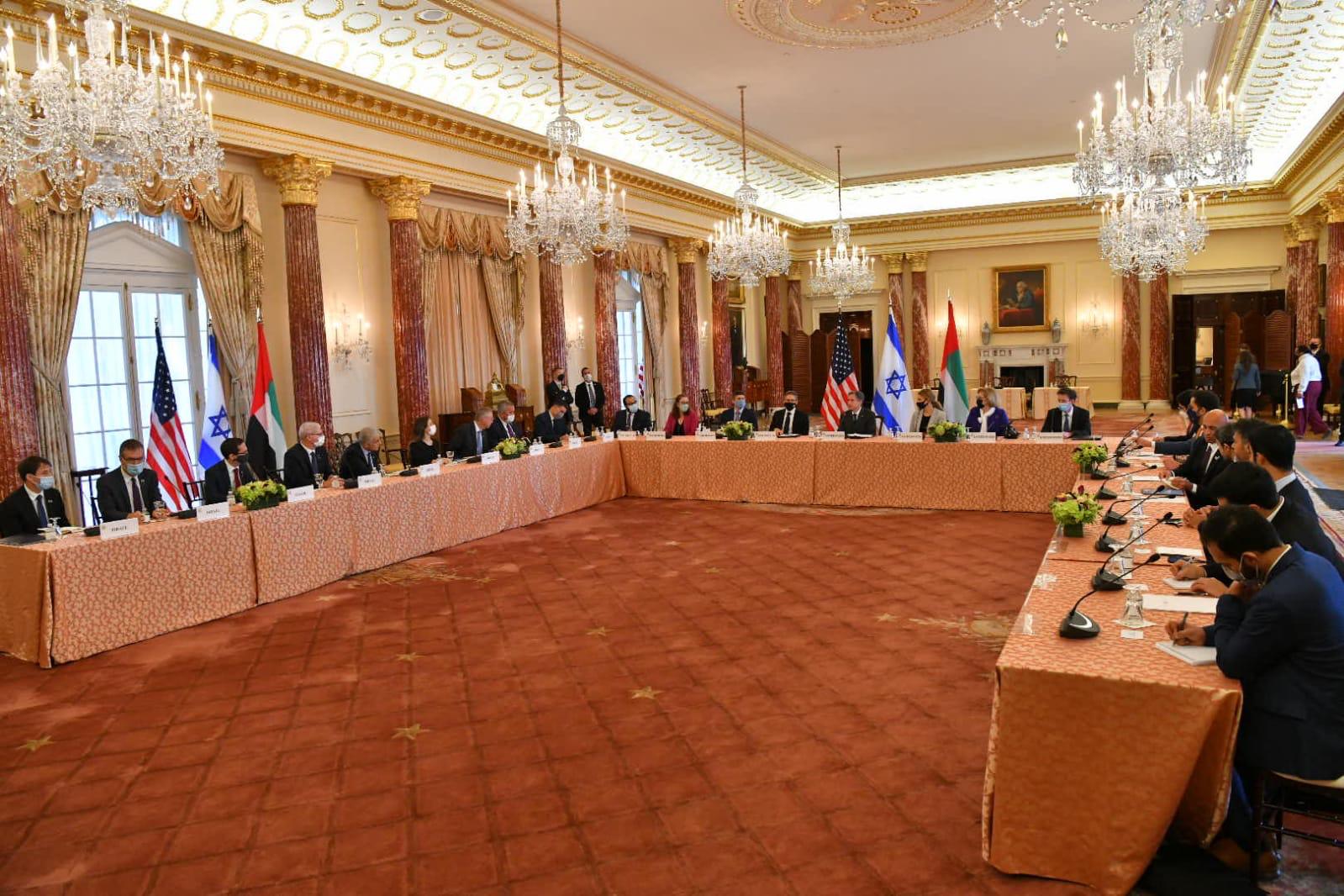 ‘That is not only our right; it is also our responsibility’

Blinken barely mentioned Iran during his opening remarks, but Lapid brought it into the conversation in his call for an alternative to the 2015 Iran nuclear deal, also known as the Joint Comprehensive Plan of Action (JCPOA), which may include the use of force.

“At the center of my visit here is the concern about Iran’s race to nuclear capability,” he said. “Iran is becoming a nuclear threshold country. Every day that passes, every delay in negotiations brings Iran closer to a nuclear bomb.”

Israel, Lapid said, reserves the right to act on Iran at any given moment to prevent the Iranian regime from acquiring a nuclear weapon.

“That is not only our right; it is also our responsibility,” he said. “Iran has publicly stated it wants to wipe us out. We have no intention of letting this happen.”

Blinken addressed Iran when asked by reporters, setting low expectations on whether there will be any concrete action into reentering the JCPOA as many expect a seventh round of indirect negotiations later this month.

Blinken said that while all three leaders believe Iran cannot be allowed to acquire a nuclear weapon, the United States favors a diplomatic pathway. Yet, he sounded less confident about whether Iran was willing to cooperate.

“But as we’ve had occasion to discuss in recent weeks, despite the fact that we’ve made abundantly clear over the last nine months that we are prepared to return to full compliance with the JCPOA if Iran does the same, what we are seeing—or maybe more accurately not seeing from Tehran now—suggests that they’re not,” Blinken said. “And time is running short because, as we’ve also had an opportunity to discuss together, we are getting closer to a point at which returning to compliance with the JCPOA will not in and of itself recapture the benefits of the JCPOA, and that’s because Iran has been using this time to advance its nuclear program in a variety of ways, including enriching uranium to 20 percent and even 60 percent, using more advanced centrifuges, acquiring more knowledge. And so that runway is getting shorter.”

Blinken said that the allies are looking at “other options” of what to do if Iran does not reenter the negotiations, while never going as far as admitting that other options could be military ones.

“I would like to start by repeating what the Secretary of State just said,” Lapid said. “Yes, other options are going to be on the table if diplomacy fails. And by saying other options, I think everybody understands here, in Israel, in the Emirates, and in Tehran what is it that we mean.”

Later on Tuesday, Blinken and his team met with Lapid and Al Nahyan individually for bilateral meetings.