Once a trailblazer, Jewish candidate Liz Holtzman, 80, hopes to make a comeback in Congress

US will stretch monkeypox vaccine supply with smaller doses

Teen star gets ‘the most expensive bar mitzvah ever’ in film version of “13: The Musical”

Nashville mayor condemns antisemitic fliers on 40-plus homes near synagogues

AZERBAIJAN—Meeting with a Jewish delegation ahead of the second Baku Summit of World Religious Leaders last week, Mubariz Gurbanli, chairman to the State Committee on Religious Associations of the Republic of Azerbaijan, referred to his country’s “sustainable and close relationship with Israel in military, economy and policy.”

Azerbaijan, a Muslim-majority state, has enjoyed strong diplomatic relations with Israel since 1992, following the dissolution of the Soviet Union and the beginning of Azerbaijani independence. Today, Azerbaijan President Ilham Aliyev and Sheikh ul-Islam Allahshukur Pashazade, in whose honor this summit took place, contribute greatly to the state’s relationship with religious minorities, fostering intercultural and inter-religious cooperation, and promoting ideas of multiculturalism.

In the context of such relations—and as a nation that prides itself on diversity and religious acceptance—summit participant Rev. Johnnie Moore observed in Baku “a Jewish community that enjoys a quality of life that is hard to find outside of Israel itself.”

“It is a Shia majority country with a longstanding relationship with Israel, where one can take a flight direct to Tel Aviv,” he told JNS. “It’s almost like a living miracle, and it shows the rest of the Islamic world what is possible when a desire for peace is actually, courageously put into action. It’s this way because of the people of Azerbaijan, and especially because of the tremendous leadership of President Aliyev.”

However, with Iran’s radial Shia Islam on its southern border, Gurbanli noted, “there is sometimes pressure from Iranian counterparts regarding Israel.” 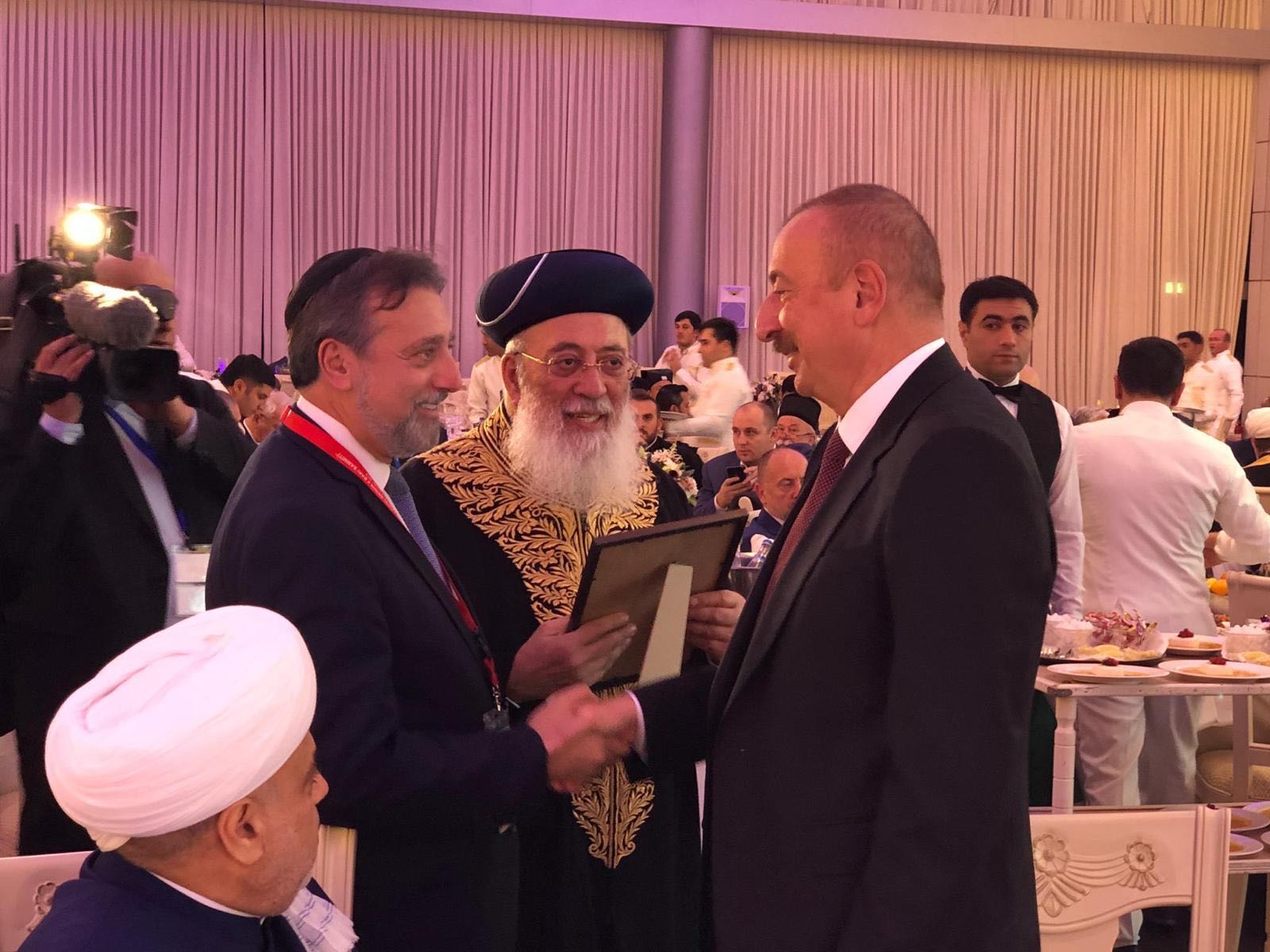 Despite the host country’s strong relations to Israel and Gurbanli’s assurance that “internal Iranian policy does not relate to [Azerbaijani] policy,” anti-Israel sentiment was not absent from the global leaders’ dialogue at the Baku summit.

From the start of the two-day summit, participant Ákos Nagy, representing Mazsihisz, the Federation of Jewish Communities in Hungary, noted that some participants referred to Israel as “Palestine.” In the context of their participation in a conference that intended to promote joint dialogue and solidarity against prejudice, extremism and xenophobia, he told JNS that using the misnomer is like saying, “We like the Jews, but the Jewish homeland, not so much.”

Similarly, in his Friday-afternoon plenary address, Rabbi Dr. Elie Abadie of New York critiqued some of the discourse when Syrian and Palestinian delegates referred to “the Israeli occupation of Palestine” and the “Zionist entity’s aggression.”

“To repeat the same old false narrative of ‘occupation’ or a ‘Zionist entity’ is counterproductive, misleading and hypocritical,” said the rabbi. “The land of Israel, by Divine revelation, by 3,500 years of history and by right belongs to the Jewish people. Even the Koran says that, and all other religious scriptures confirm that.”

To call the land of Israel “Palestine,” said Abadie, is historically false.

“Forty-eight Jewish prophets—yes, Jewish, not Palestinians—lived there and preached there,” he explained. “The name ‘Palestine’ was imposed on the land by the Roman Empire after the destruction of the Second Temple to completely disconnect and dissociate the Jews from that land. So to repeat that, it’s a travesty of history.”

Roadblock regarding terminology of joint declaration

Abadie also spoke out in the summit plenary against an anti-Israel addition to the joint declaration, a cornerstone of the final day of the summit that all delegates sign, which Abadie realized was retroactively changed without participant consent.

In the draft of one of the sections of the joint declaration, which was handed out to leaders present, the document asked participants: “To make practical efforts to prevent provocations and violence in the sacred temples of all religions, including the Holy Place of Abrahamic religions, Al Quds al-Sharif/Jerusalem.”

Before agreeing to sign, Abadie requested an edit to the text, suggesting that if “Al Quds al-Sharif” is mentioned, so, too, should “Solomon’s Temple” and the “Temple Mount.”

According to Abadie, the committee agreed with him and decided to omit Al Quds al-Sharif so to solely mention Jerusalem. But in the final plenary of the conference, as the final document with the approved changes was read aloud, Abadie noticed that “the entire document was the same word-for-word, except that section.”

At that time, the section in the final document now asked leaders: “To make practical efforts to prevent provocations and violence in the sacred temples of all religions, including the Holy Place of Abrahamic religions,” adding, “and to resolve the Palestinian cause according to U.N. and international resolutions.”

Abadie spoke up in the plenary, saying that this second phrase was added without consent, and maintaining that he would not sign onto the declaration with this addition.

As the final remarks by conference organizers did not address Abadie’s concerns, Abadie told JNS that he would be following up with organizers regarding any further changes or actions to the document.