Schmaltz is the secret ingredient you need for your salad

Thirty-eight members of the French parliament arrived for a three-day visit to Israel earlier this week on a tour sponsored by the European Leadership Network (ELNET), in cooperation with the Israeli Ministry of Foreign Affairs. ELNET was established 12 years ago by a group of Jewish leaders from Europe, Israel and the United States to bring Europe and Israel closer together. It operates offices in several major European cities.

That the largest foreign diplomatic delegation to arrive in Israel post-pandemic should come from France may seem surprising, given the ups and downs of the two countries’ relationship and France’s struggle to combat anti-Semitism, in part enflamed by its anti-Israel media.

“It’s been our experience that you need to convince people that Europe has not been lost,” Julia Lisiecka, research and communications manager at ELNET, told JNS. “For many—both Israelis and Jews in the Diaspora—Europe is a continent that’s going to be anti-Israel no matter what, and so oftentimes, there’s this attitude that there’s no need to invest in this relationship. That’s why ELNET was established in the first place, to fill this void.”

The group met with Israeli Prime Minister Naftali Bennett, former Prime Minister Benjamin Netanyahu and Israeli President Isaac Herzog, among others. The two major topics of conversation were combating Iranian aggression and the problem of anti-Semitism in France.

The delegation also toured one of Israel’s Iron Dome air-defense batteries and met with the Mayor of Sderot, Alon Davidi. Sderot in Israel’s south is one of the hardest-hit cities by Hamas rockets whenever tensions flare between Israel and the Gaza Strip.

The French delegation spanned the gamut in terms of political affiliation—from members of France’s Socialist Party to the Republicans Party. More than half were visiting Israel for the first time. Some came with an already strong attachment to Israel; others have yet to form an opinion, according to Lisiecka. “They want to learn. They want to find out more about the country,” she said. 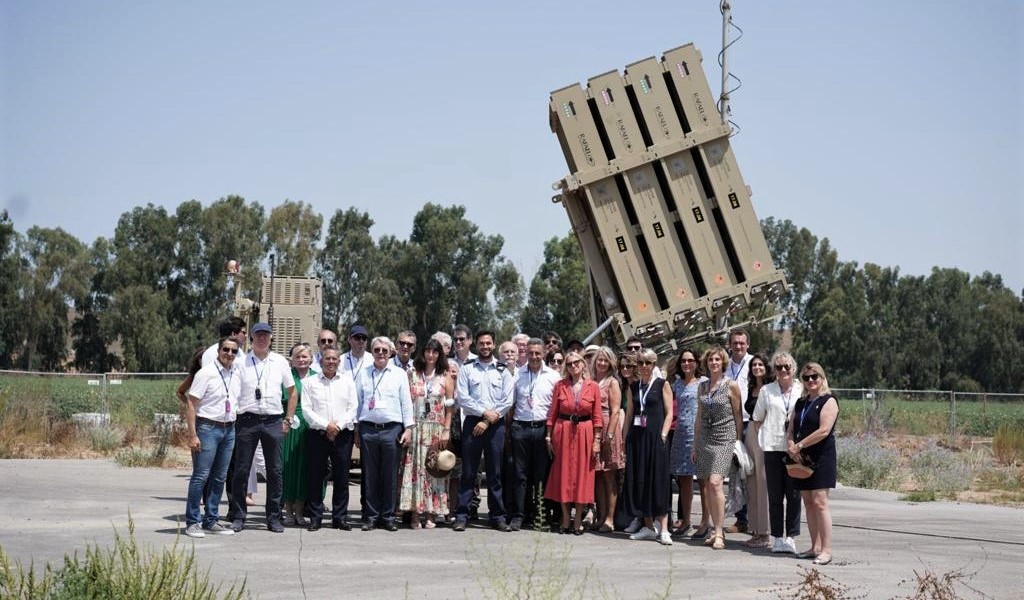 Thirty-eight members of the French parliament spent three days in Israel on a tour sponsored by the European Leadership Network (ELNET), in cooperation with the Israeli Ministry of Foreign Affairs. Here, they stand in front of the Iron Dome air-defense system, July 2021. Credit: ELNET.

‘A real threat to French society’

Two delegation participants who didn’t need to be convinced about the importance of supporting Israel are French parliament members Philippe Latombe and Constance Le Grip, active members of the France-Israel Friendship Group, whose purpose is to strengthen ties between parliament members in both countries. Latombe belongs to the Democratic Movement (MoDem) party, a member of President Emmanuel Macron’s coalition, and Le Grip to the Republicans (Les Républicains) party, which sits in the opposition.

Le Grip tells JNS her interest began with a tourist trip to Israel with her family in the late 1970s. “I really fell in love with Israel, as did my parents and the rest of my family,” she said. “There are also political reasons, of course. … It’s the only real democracy in this region, and for me, it is important to be politically active in supporting this very particular, very unique and very strong democracy.”

Israel first came onto Latombe’s radar as a tech dynamo—the “startup nation.” He noted that digital technologies are his specialty, and as France wants to enhance its status as an innovation hub, it was only natural that he should find himself in Israel shortly after becoming a member of the French National Assembly. “When I visited Israel for the first time in 2017, it opened my eyes. I saw the startup nation was also a democratic nation that needed to be supported,” he told JNS.

Latombe and Le Grip said they are deeply troubled by anti-Semitism in their country. Latombe says: “We have in France a stream of anti-Semitism with the extreme right-wing, and we have also the second generation of immigration from North Africa who are born in France and who are very open to the Palestinian cause. The two streams are getting stronger in France. The extreme right is stronger than in the past year, and the number of children of second-generation immigration who are born in France has increased. So the two combine to make anti-Semitism a real threat to French society.”

Le Grip, who sits on a study group against anti-Semitism in the French parliament, sees the situation somewhat differently. She says there has always been a strain of anti-Semitism in French society for cultural, political and religious reasons, but that “old-fashioned anti-Semitism,” as she calls it, is weakening.

“It’s now being replaced by a new kind of anti-Semitism connected to Israel, with a lot of ignorance and stupidity,” she said. In regard to the violence against Jews, she notes that “we’re not talking about all of France. It’s the increase of violent acts of anti-Semitism in the main cities, in Paris and in regions around Paris. It’s linked to the arrival of new populations.”

She also expressed concern about “left-wing movements and associations in French society, which are absolutely anti-Semitic.”

Le Grip and Latombe both signed onto a 2019 National Assembly resolution adopting the International Holocaust Remembrance Alliance’s (IHRA) working definition of anti-Semitism, which recognizes anti-Zionism as a form of anti-Semitism. 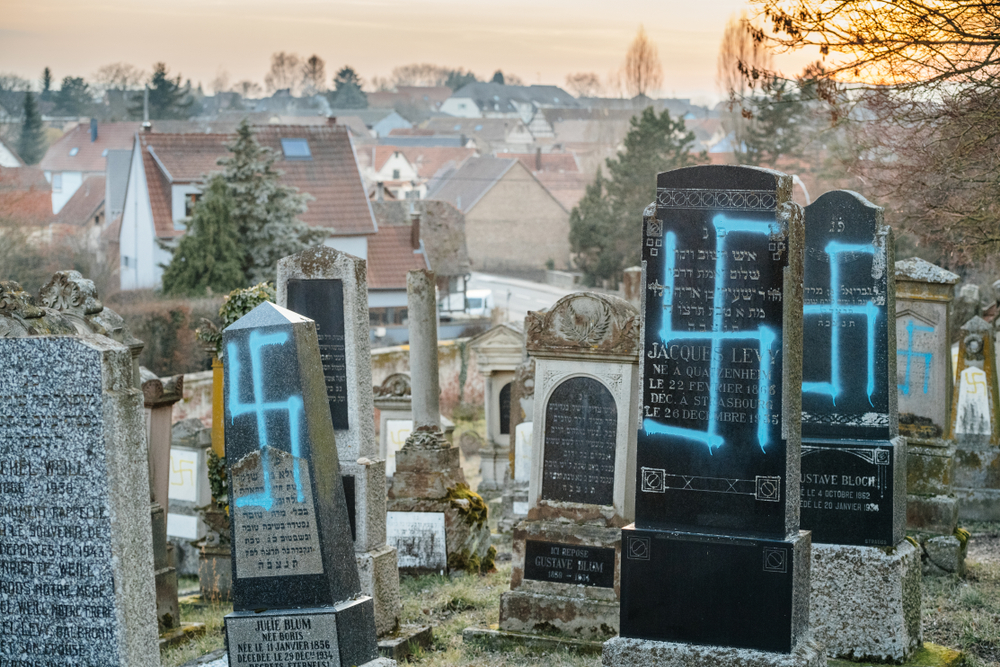 Sunset over the Jewish cemetery in Quatzenheim near Strasbourg, France, where gravestones were damaged and vandalized with swastikas in spray-painted in blue, February 2019. Credit: Hadrian/Shutterstock.

JNS asked the two French representatives about recent anti-Israel statements coming from government officials, such as French Foreign Minister Jean-Yves Le Drian’s comment on May 23 that Israel risked “long-lasting apartheid” if the Palestinians were not given a state. The remarks caused widespread anger in Israel and were condemned by then-Prime Minister Benjamin Netanyahu. France’s ambassador to Israel was called in for a rebuke by then-Foreign Minister Gabi Ashkenazi.

Both LeGrip and Latombe point to France’s Foreign Ministry, the Quai d’Orsay, as the culprit. “We have problems in France with our Foreign Ministry. They are stuck in the late ’60s, when General [Charles] de Gaulle said that Israel was not a friend like it should be,” said Latombe. Le Grip described it as the French version of America’s deep state—“old positions and culture in this ministry sometimes reappear.”

Of similarly anti-Israel comments made by French Prime Minister Jean Castex shortly after the May conflict, in which he showed sympathy for Palestinian civilians but none for Israeli civilians being pounded by rocket fire, Latombe said the painful truth is that most French people would accept Castex’s comments as “fair.”

“I was in the National Assembly when he gave that answer during a question time,” recounted Le Grip. “It was a very difficult moment to sit in my chair and to have to listen to the French prime minister and his very negative answer. I totally disagreed. I’m a member of the opposition. I was quite active in demonstrating how badly offended I felt after this terrible remark of Jean Castex.”

Latombe noted that the media carries guilt in fostering anti-Israel attitudes. “Media in France are very keen on the Palestinian cause. They are mostly left-wing. They use the word apartheid,” he said. “We saw in the Knesset today Arab members. They have the same rights.”

The French, however, don’t seem to be aware of that any more than they’re aware that Jews can’t live in the Palestinian Authority, he said.

“We are here to ensure that the members of parliament are informed,” he said. “That’s one goal of our trip. And to go back to France and to say that what they hear, it’s not true.”

Latombe is optimistic about the future. He said he believes that Macron’s attitude about Israel is changing. Lebanon, he noted, has been the wake-up call.

“We are losing Lebanon. … Macron realizes that Iran was behind the collapse of Lebanon and the best way to counter Iran is to have stronger relations with Israel,” he said. “Now the attitude must be changed within the foreign office.”

Latombe said he wants to be sure that Israel understands it has friends in France’s parliament: “We are facing the same problems, and we want to deal with the problems with Israel.”

Le Grip agreed: “Israel is the only democracy in the Middle East, and we know exactly how important and dangerous are the threats against Israel. … We share values with Israel. Liberté, égalité, fraternité—our French Republic values are also fundamental values of the State of Israel. We know we have common interests, and we’re facing the same threats.”