‘We don’t operate according to Hezbollah’s equations’

Trump pardons Michael Flynn, whose lies to FBI included one about Israel

More than meets the eye in secretive meeting between America, Israel and Saudi Arabia

Google Play banned the third-party app BitChute this week, which was promoted as a “free speech” alternative to YouTube that has become a safe haven for neo-Nazis, hosting racist, violent and anti-Semitic videos that are later posted on social media.

Google suspended the app, stating that it is in violation of its affiliate spam policy, although BitChute denies this claim, tweeting a photo of Google’s notification.

The U.K.-based video platform was set up in January 2017 by tech entrepreneur Ray Vahey and Richard Anthony Jones. It has become a platform used by alt-right groups, with UK-based Community Security Trust (CST) finding it to be one of the four most dangerous outlets of extreme anti-Semitic content on the Internet.

According to pro-Israel lawyers and activists, in the context of rising anti-Semitism, public access to this platform and the site’s active promotion of anti-Semitism are cause for major alarm. Recently, social-media companies are being pressured to clean their platforms of hate speech and adopt the IHRA definition of anti-Semitism, but this has led anti-Semites and white supremacists to look for other places to share their content.

Despite the site’s community guidelines that say “incitement to violence” and “malicious use of the platform” will not be tolerated, on the site are pro-ISIS content, calls for the killing of Jews, Holocaust denial, classic anti-Semitic characterizations of Israel and Israelis, and drawing comparisons to a contemporary Israeli policy to that of the Nazis—each with tens of thousands of views. 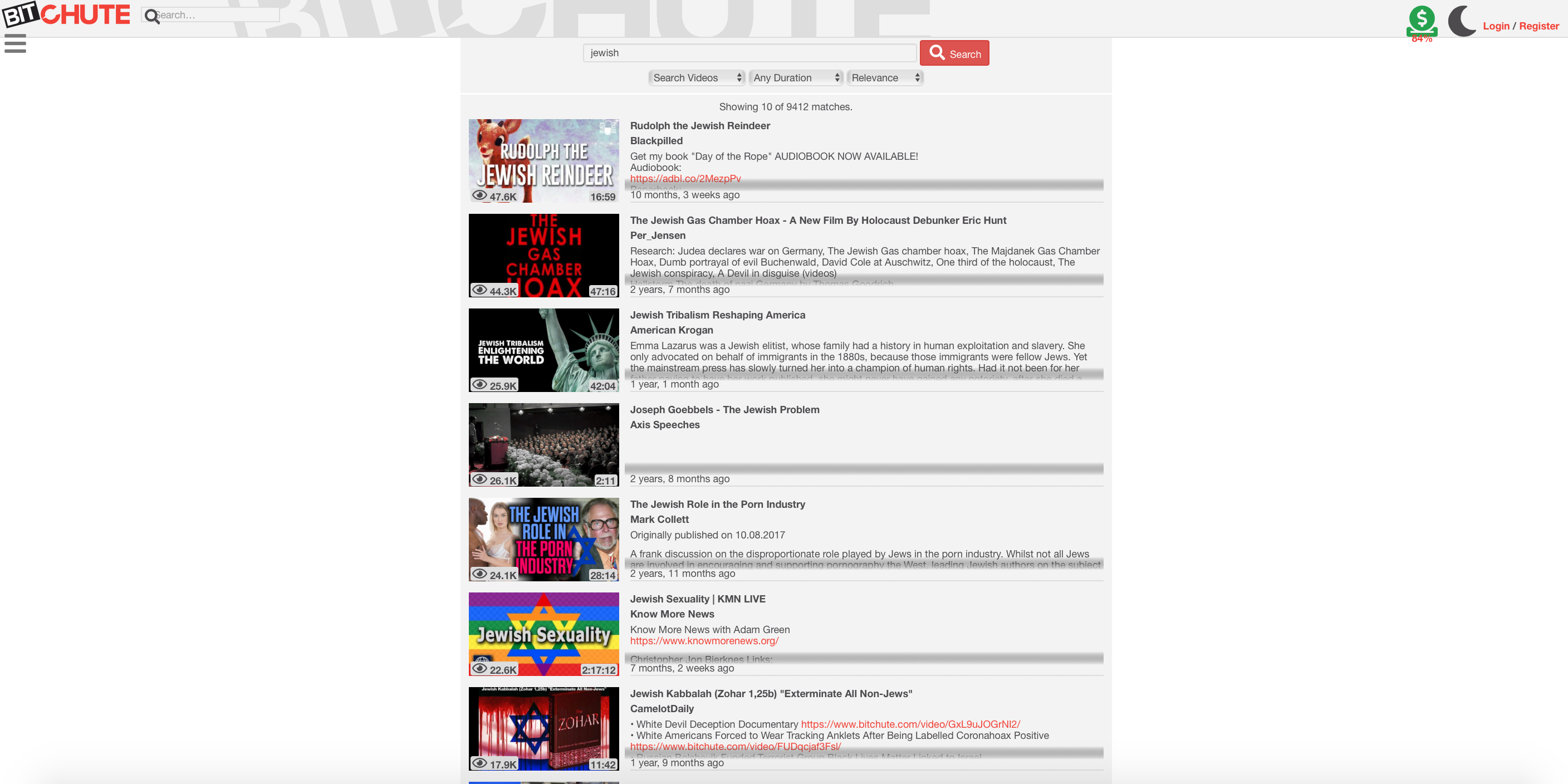 Videos posted on Bitchute.com are openly accessible to anyone, and include videos such as a parody of the “Friends” TV-show theme song called “We must gas the Jews,” featuring concentration-camp photographs and lyrics including: “It seems these kikes have taken all my dough, you know what we must do, it’s time for them to go. … We must gas the Jews until the ovens are full. … They’ll be glowing like coal … cos they’re evil Hebrews … gotta bake each and every kike until they’re nice and crispy. … I want to start each day with Hebrews huddled in a pit and when they’re beaten and stripped, we must gas each and every Jew.”

BitChute also hosts Holocaust-denying videos, including one called “We really have to gas the kikes this time,” which says (over pictures of Auschwitz), “Aren’t you all sick of blaming Nazis … Don’t you understand history is warped by the Jews … you should all know by now we gassed no Jews … the only victors of world war II they were Jews.”

‘History has shown that this is a dangerous trend’

Director of UK Lawyers for Israel, Caroline Turner, maintained that online anti-Semitism promotes and incites hatred of Jewish people, and even violence against Jews. “It twists the truth, contains blatant lies and promotes conspiracy theories suggesting that Jews are the cause of various evils in the world,” she told JNS.

“There is no specific law against anti-Semitism in the United Kingdom, although there are more general laws about sending grossly offensive and menacing messages, and stirring up racial hatred. If the person who uploaded the offensive material was based in England or Wales, and traceable, then it is possible to report their behavior to the police,” she explained, adding that there has been a precedence of prosecuted individuals who have sent anti-Semitic messages over social media, though they have been few and far between. 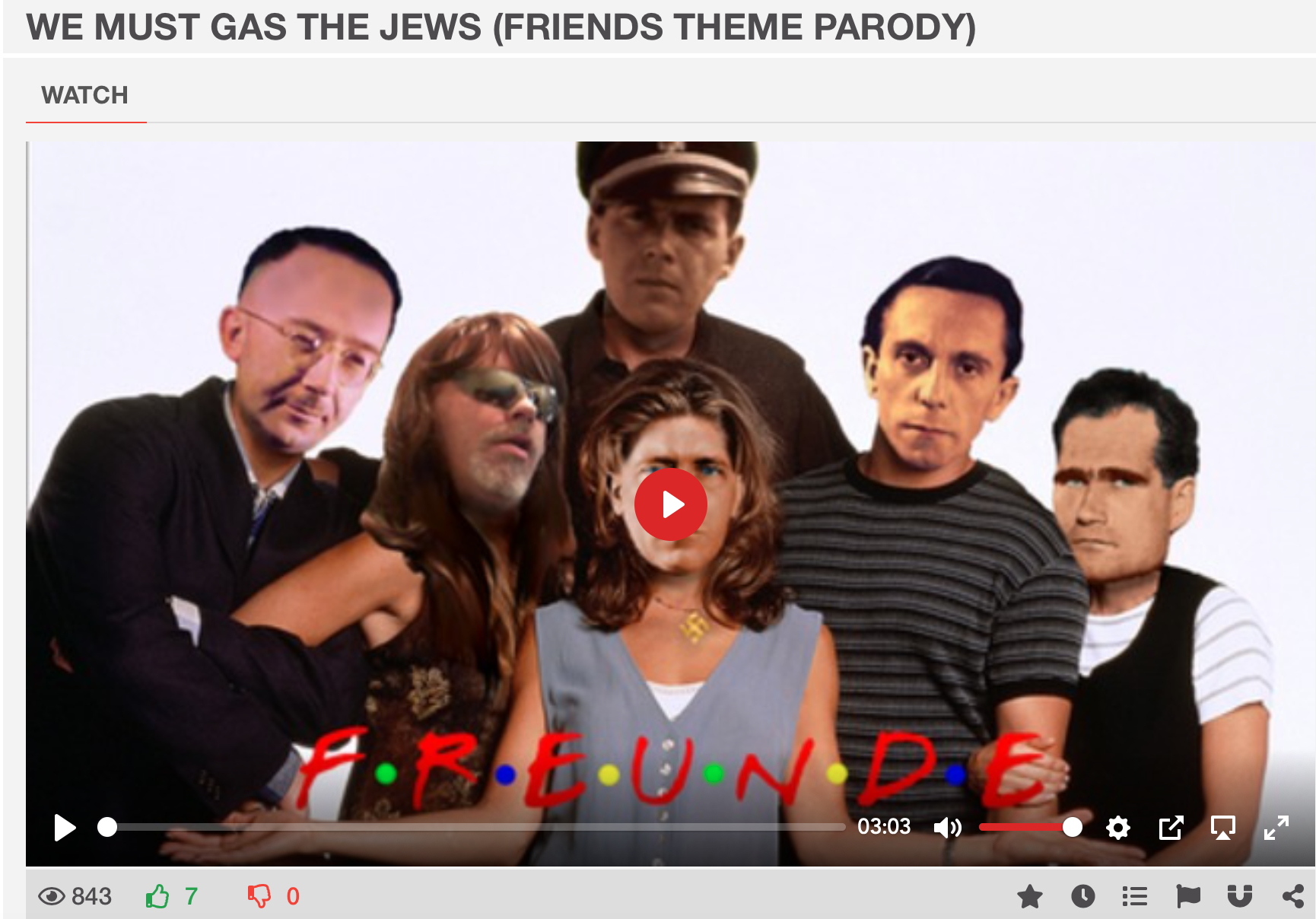 A screenshot of an anti-Semitic video on BitChute. Source: Screenshot.

Turner related that fighting anti-Semitic material online is especially challenging due to the prevalence “difficulties in finding out who is responsible for the post.” Another challenge, she added, is “if the service provider and those posting the material are in a jurisdiction where the right to free speech is considered absolute.”

UK Lawyers for Israel has contacted Bitchute’s Internet service providers, including “Epik, Cloudflare, Taboola, AS53667 Frantech Solutions, Google Ads, Microsoft Azure, Choopa, Subscribestar and Regus, to request that they terminate their relationship with BitChute. So far, said Turner, only Choopa has responded that “they had checked with the Content Delivery Network (CDN) provider, Cloudflare, who indicated that the back-end hosting provider is not Choopa, instead it appears to be AS53667.”

“It is truly shocking that there is so much anti-Semitic material online and on social media, and really that there have been so few convictions. History has shown that this is a dangerous trend, and it really must be stopped. If offenses are being committed, we call on the police to prosecute them, and hopefully, this will deter other from this behavior,” she said.

Gideon Falter, chief executive of British NGO Campaign Against Antisemitism (CAA), explained that “over the past several years, we have seen an exponential growth in anti-Semitic abuse on social-media platforms, including mockery and denial of the Holocaust, anti-Jewish incitement and endless antisemitic tropes from the far-right and the far-left.”

He criticized the “repeated failure of social-media companies to take action against racism on their platforms,” saying, “we continue to hold meetings with social media executives and support their efforts to tackle online racism, but too often we find ourselves also having to call out their inaction.”

CAA has joined others in calling for social-media companies to adopt the IHRA definition of anti-Semitism, launching a campaign to urge the British Government to bring forward its Online Harms Bill to address anti-Semitism on the internet.

“The popularity of anti-Semitic tropes and conspiracy theories are a wake-up call,” said Falter. “Social-media companies have a responsibility to clamp down on such gratuitous and dangerous racism on their platforms, and we will continue to press them to act.”