Israel behind cyberattack on Iranian gas stations, say US officials

Six ancient findings in the footsteps of the Maccabees

Israel’s Ministry of Tourism and Land Authority recently announced the winners of two tenders for the construction of four new Dead Sea hotels, part of a new complex that will be constructed alongside a shopping center and 430,000-square-foot conference center.

Africa Israel, Fattal Hotels, Elad Hotels and Barclays Israel won the tender to build their hotels, amounting to 1,000 rooms, in the new tourism area between Ein Bokek and Hamei Zohar in the southern Dead Sea. In the same area, Israel’s Ministry of Tourism has already inaugurated a 2.5-mile and half a billion-shekel promenade along the sea shore.

According to Minister of Tourism Yariv Levin, the tender occurred in the context of a “tourism revolution at the Dead Sea,” in which Israel is “leveraging it as an attractive and modern tourist destination.”

Although it has been nearly 20 years with no new hotels built in the area, the Dead Sea region enjoys the highest annual average occupancy of hotels in Israel. Given the significant increase in the number of tourists arriving in Israel, Levin welcomed the change as “a great step forward on the road to dramatic change in the region,” including contributions to employment and the economy. 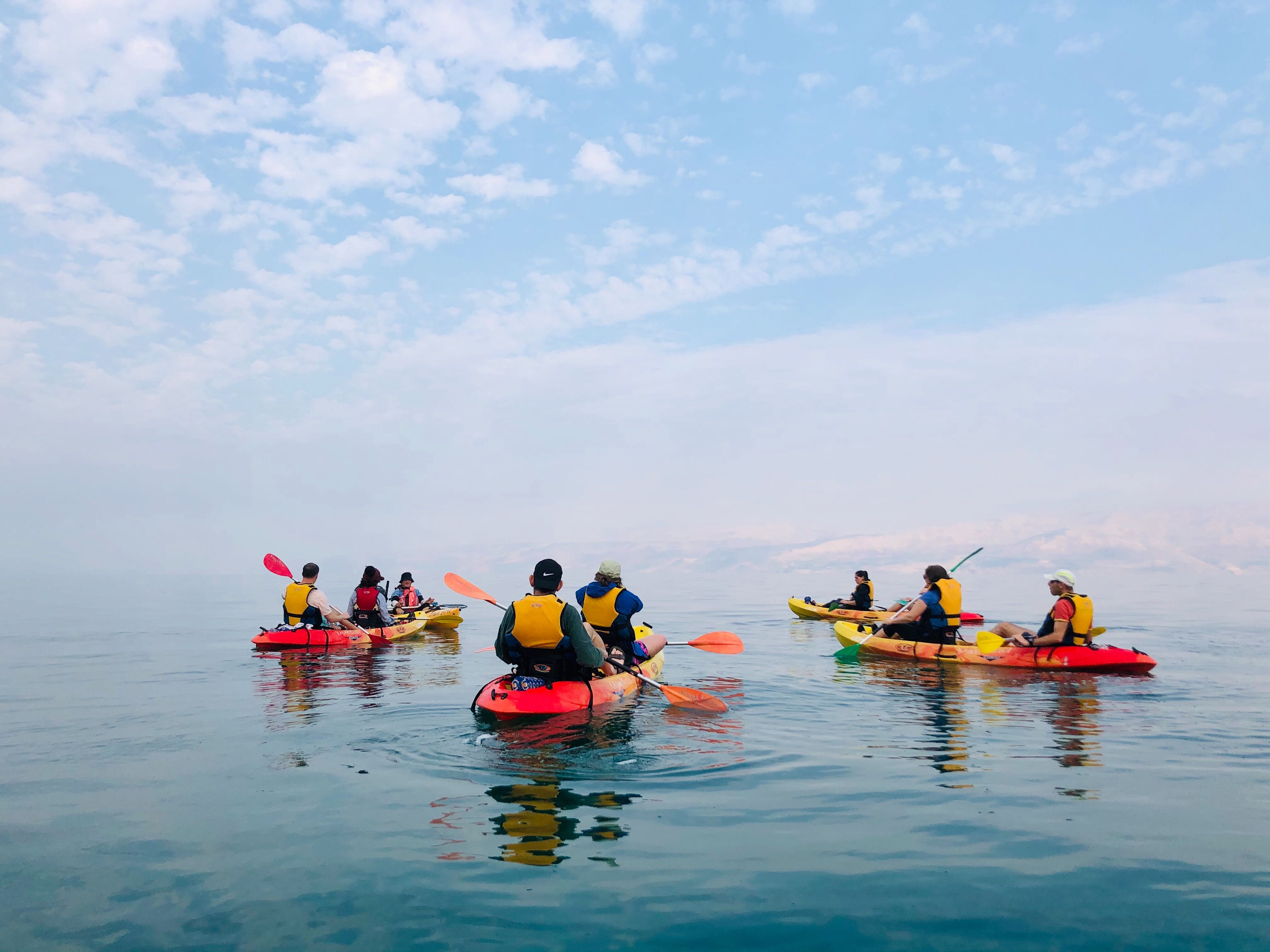 Tourist kayaking on the Dead Sea. Photo by Eliana Rudee.

According to Noam Bedein, Israeli photojournalist for the Dead Sea Revival Project, tourism to the Dead Sea is not only good for the economy, but for engaging with Israel in a hands-on manner. (He is the son of David Bedein, director of the Center for Near East Policy Research, who has written columns for JNS.)

On Bedein’s ecotourism excursions to the Dead Sea by boat and kayak, which have seen an increase of 500 percent in visitors in the last year, guests are presented with his time-lapse documentation for the Dead Sea that tells a tale of beauty, but also of a looming ecological disaster.

Tourism, he told JNS, is a double-edged sword as commercial ventures like the Dead Sea Works, which produces salt products for fertilizers, cooking and the cosmetic industry, account for 30 percent of the ecological damage at the Dead Sea, largely caused by evaporating water that is not being replenished.

According to Bedein, the main effort to save the Dead Sea, the “Red-Dead” canal, has received $10 billion from the World Bank for its desalination pipeline and plant that would give water to Jordan on the way to Dead Sea. The idea, which is being discussed as a part of peace agreements, is thus a symbol of cooperation that could be a “model case for the entire world” that suffers from water shortages.

Telling the story of the problems and solutions of the Dead Sea, said Bedein, is a great way to educate tourists to Israel and even those who might not be able to make the trip to Israel. Through virtual reality and art, he offers multimedia presentations about Israel’s water management and technology on college campuses; he is scheduled to talk about such issues at the annual AIPAC policy conference in Washington, D.C., to be held this year from March 1-3. 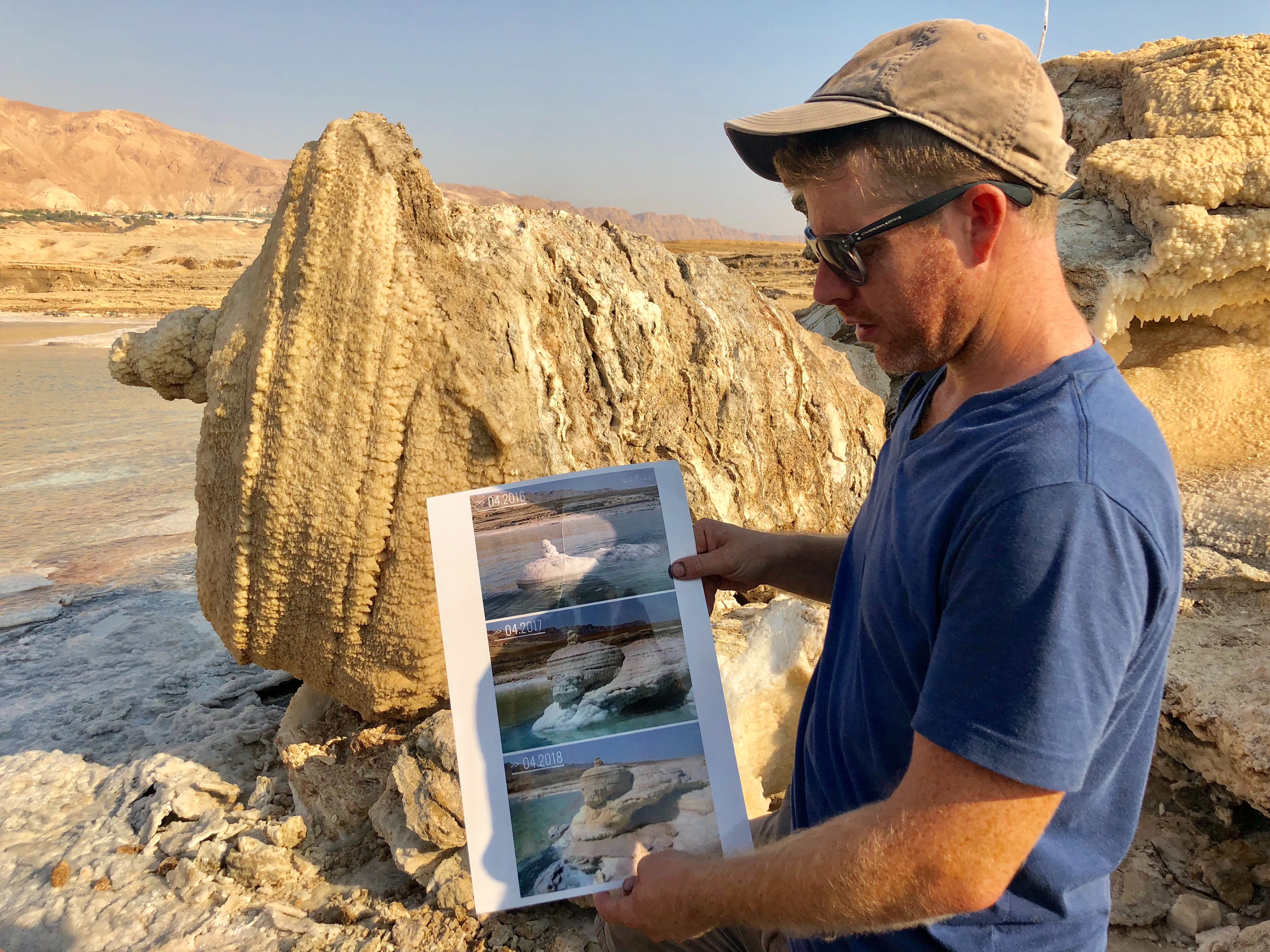 to Noam Bedein, Israeli photojournalist for the Dead Sea Revival Project, shows pictures of changes in the level of the Dead Sea in recent years. Photo by Eliana Rudee.

Speaking to Birthright-Taglit groups who “only go to Ein Bokek, are there for a half-hour, and have no education or content for that site,” Bedein says there is tremendous opportunity for discussions about water diplomacy, land preservation and one of Israel’s water treasures, which he calls the eighth wonder of the world.

‘Importance of its preservation’

Indeed, one of Bedein’s recent kayak excursion participants, Emily Faber, told JNS that she was especially interested to see and learn about “the geopolitical makeup of water in this region and what the diminishment of the Dead Sea means with regards to an environmental, social, cultural and historical impact.”

Faber, who is from Brooklyn, N.Y., said her previous visits to the Dead Sea as a part of Jewish fellowships included “floating and mud,” but not education.

Learning about the Dead Sea, she said, could provide education and context to the “history and importance of an environmental anomaly like this,” as well as its “protection and importance of its preservation.” 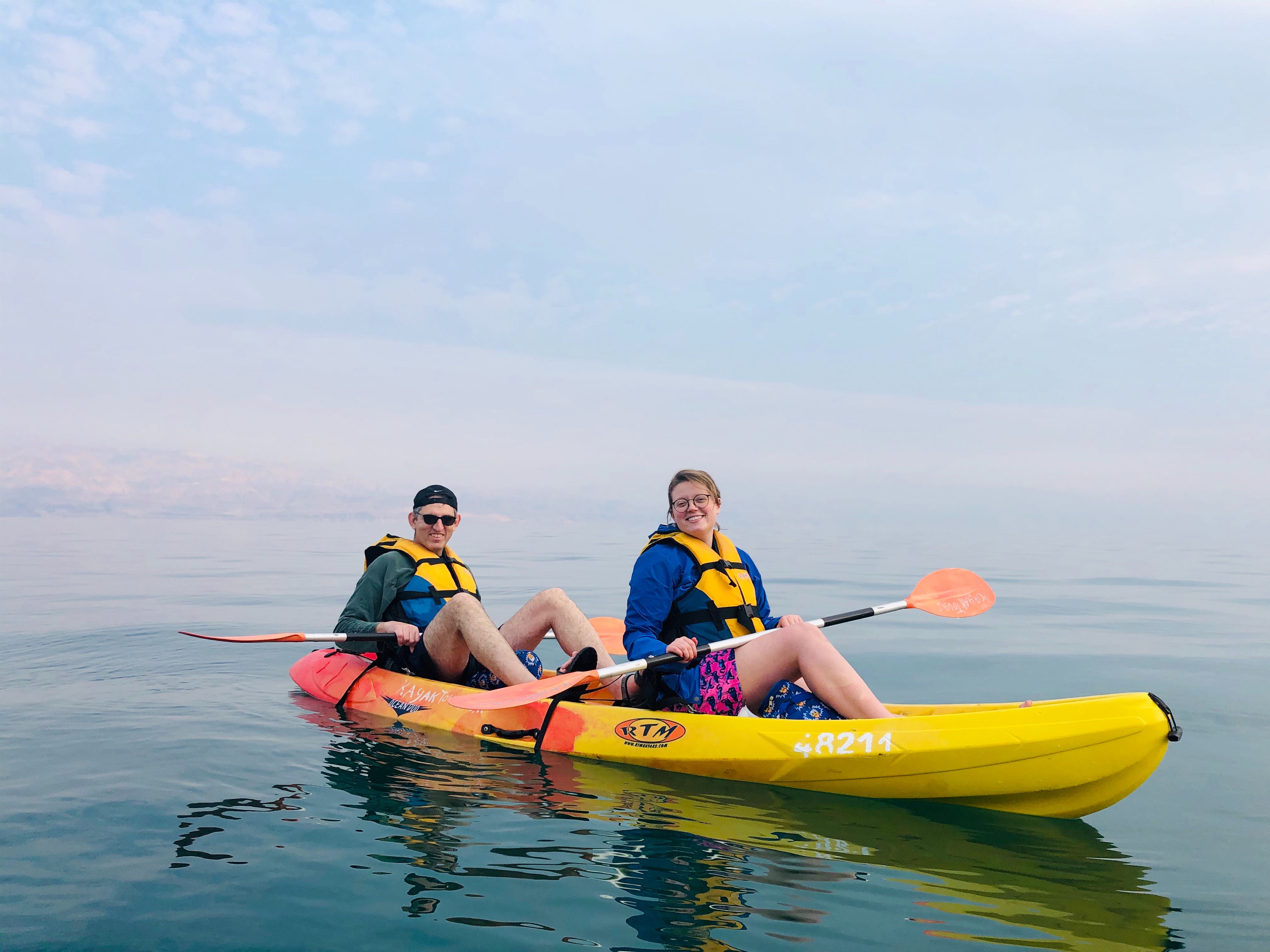 Emily Faber, right, on a kayaking tour of the Dead Sea. Photo by Eliana Rudee.

“Having these discussions is a great way to connect people to Israel,” said Bedein, who is writing a master’s thesis about how Israel can learn from American environmental causes.

Part of the Ruderman Program for American Jewish Studies at the University of Haifa, Bedein has learned during his tours and studies that in the context of a disconnect between Israel and America, the decreasing relevance of institutional Judaism and an increasing relevance of Jewish values of tikkun olam—the repair of the world—“this is a great way to connect people, and especially the youth, to a new Jewish identity through environmental causes.”