Israeli-developed robotaxis to debut in Munich next year

Naftali Bennett departs for US to address UN General Assembly

Hundreds of Iraqi leaders call for normalization of ties with Israel

What Jews are voting for in Germany’s national elections

A recent mass arrest of Hamas members in the West Bank offers a glimpse into the deceptive nature of the ongoing quiet in the area and how hard the terror organization based in the Gaza Strip is working to puncture the relative calm.

At any given time, Hamas is trying to set up tens of terror cells, and only the determined efforts by the Israeli defense establishment prevents these efforts from maturing into waves of shootings and bombings against Israelis.

Earlier this month, the Israel Defense Forces and Shin Bet intelligence agency announced the arrest of dozens of Hamas operatives in the village of Turmus Aya, north of Ramallah. Assisted by the Border Police, the arrest operation enabled Israel to break up a Hamas student cell at Birzeit University near Ramallah.

Some of those apprehended “were directly involved in terror activities, including money transfers, incitement and the organization of Hamas activities,” the IDF said in a statement. The suspects were taken into custody for questioning.

These results were made possible by high-quality intelligence, operational preparations and tight cooperation between multiple Israeli security organizations in the West Bank. The arrests are merely the tip of the iceberg.

A broad campaign by the Israeli security forces against Hamas occurs around the clock, mostly behind the scenes, and it is the central factor behind the relative quiet. The Palestinian Authority, which is directly threatened by Hamas’s activities, has an interest in the coordination it conducts with the IDF; the official resumption of this coordination in November 2020 means more effective repression of Hamas’s terror activities in the area. 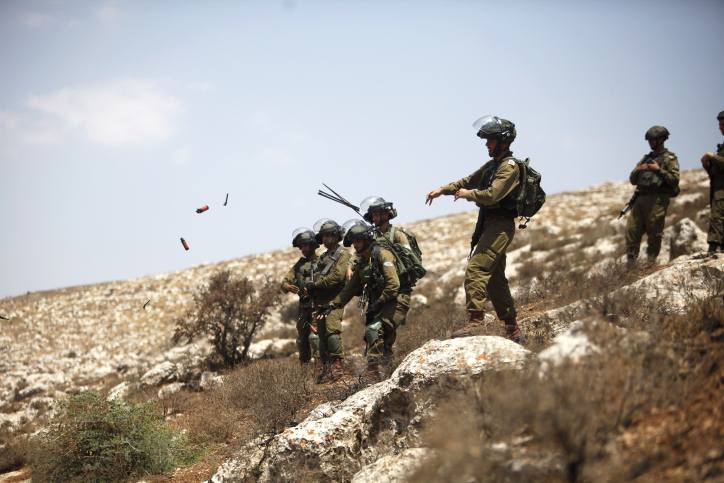 Israeli army forces clash with Palestinians during a protest in the village of Beit Dajan, near Nablus on July 16, 2021. Photo by Nasser Ishtayeh/Flash90

Hamas often disguises such recruitment programs as social-welfare activity. The Islamic student organizations, known locally as a Kutla, form a strategic recruitment mechanism for Hamas. The organization’s Gaza headquarters, as well as operatives in its overseas branches in Turkey and Lebanon, are often behind attempts to remotely set up West Bank terror cells, fund them, recruit more members and eventually activate them to conduct attacks against Israeli targets, including plots to conduct mass-casualty shootings and bombings in Israeli cities.

‘Paradigm shift in public attitudes against the P.A.’

While Hamas is continually working “under the radar” to undermine stability in the West Bank, the current timing of the arrests is of particular interest since the terror faction clearly recognizes a potential to improve its foothold in the West Bank due to the growing unpopularity of and ongoing power struggles within the Fatah-led P.A. Hamas is committed to eventually toppling and replacing Fatah as a ruling movement, as it did in Gaza in 2005. It remains “flexible” on how to do this—whether via ballot, elections or bullet, as occurred during the bloody Gaza coup against Fatah.

It is this objective of weakening Fatah that led Hamas to fire rockets at Jerusalem and southern Israel on May 10, sparking a destructive 11-day conflict with Israel. One of the key considerations behind Hamas’s choice to risk war was the idea that marketing itself as Jerusalem’s “genuine” defender would strengthen Hamas’s status at the expense of the P.A. in Palestinian public perception.

A recent opinion poll among Palestinians by the Palestinian Center for Policy and Survey Research found that Hamas made considerable progress towards this goal in its war with Fatah for Palestinian hearts and minds. The center stated that its report found a “semi-consensus that Hamas has won the May 2021 confrontation with Israel,” adding that this represents “a paradigm shift in public attitudes against the P.A. and its leadership and in favor of Hamas and armed struggle.”

The poll also found a two-third majority rejecting the decision by P.A. chief Mahmoud Abbas to postpone the Palestinian elections—a decision driven by the knowledge that a splintered Fatah was on its way to elections defeat and that Hamas was en route to victory.

Meanwhile, Hamas’s efforts on the ground are occurring around the clock. In 2020, 430 significant terror attacks were thwarted by Israel in Jerusalem and the West Bank; in 2019, that number topped 500. The drop in attempts last year represents a temporary slowdown caused by the coronavirus pandemic.

The current year shows no sign of letting up, and Hamas is encouraged by the weakness it identifies in the rival Palestinian ruling entity it wishes to replace.

These factors lead to the conclusion that the calm in the West Bank is highly deceptive. At the surface level, the quiet seems to be secure, but it rests on the ongoing ability of the Israeli defense establishment to successfully thwart Hamas terrorism recruitment and orchestration efforts, using top intelligence.

The post Deceptive nature of current quiet in the West Bank appeared first on JNS.org.