Military veteran Tony Gonzales, an advocate of peace through strength

Lebanese president to US official: Impasse in maritime border talks can be overcome

A threat by Hezbollah to revenge the death of one of its operatives, killed in July in an alleged Israeli airstrike, remains in place, though there has been no dramatic change in the dynamics on Israel’s northern front following a significant series of Israeli airstrikes overnight on Wednesday targeting Iranian forces, a senior security analyst told JNS.

Ely Karmon, a senior research scholar at the International Institute for Counter-Terrorism (ICT) in Herzliya, spoke hours after the Israel Defense Forces launched strikes on Iranian Quds Force targets in Syria and on military targets of the Bashar Assad regime, including surface-to-air missile batteries that fired on Israeli jets.

The Israeli strikes came after the IDF discovered improvised explosive devices planted on the Israeli side of the Alpha Line on the Golan Heights, which it said were placed by a Syrian attack squad operating under Iranian command.

“The response of the Israeli defense establishment is very natural,” said Karmon. “In past incidents of bomb attacks and intrusions, the IDF has responded with strikes. There has been no dramatic change.”

The recent escalation has not altered the promise by Hezbollah chief Hassan Nasrallah to revenge the death of his soldier, which “apparently still stands,” stated Karmon.

The fact that a big section of the IDF has been on high alert on the two northern borders, Lebanon and Syria, for months since Hezbollah’s threats and so far failed attempts to exact revenge forms a “comfortable situation for Hezbollah,” said Karmon. “In addition to the nerves on the Israeli side, this alert costs a lot of money.” 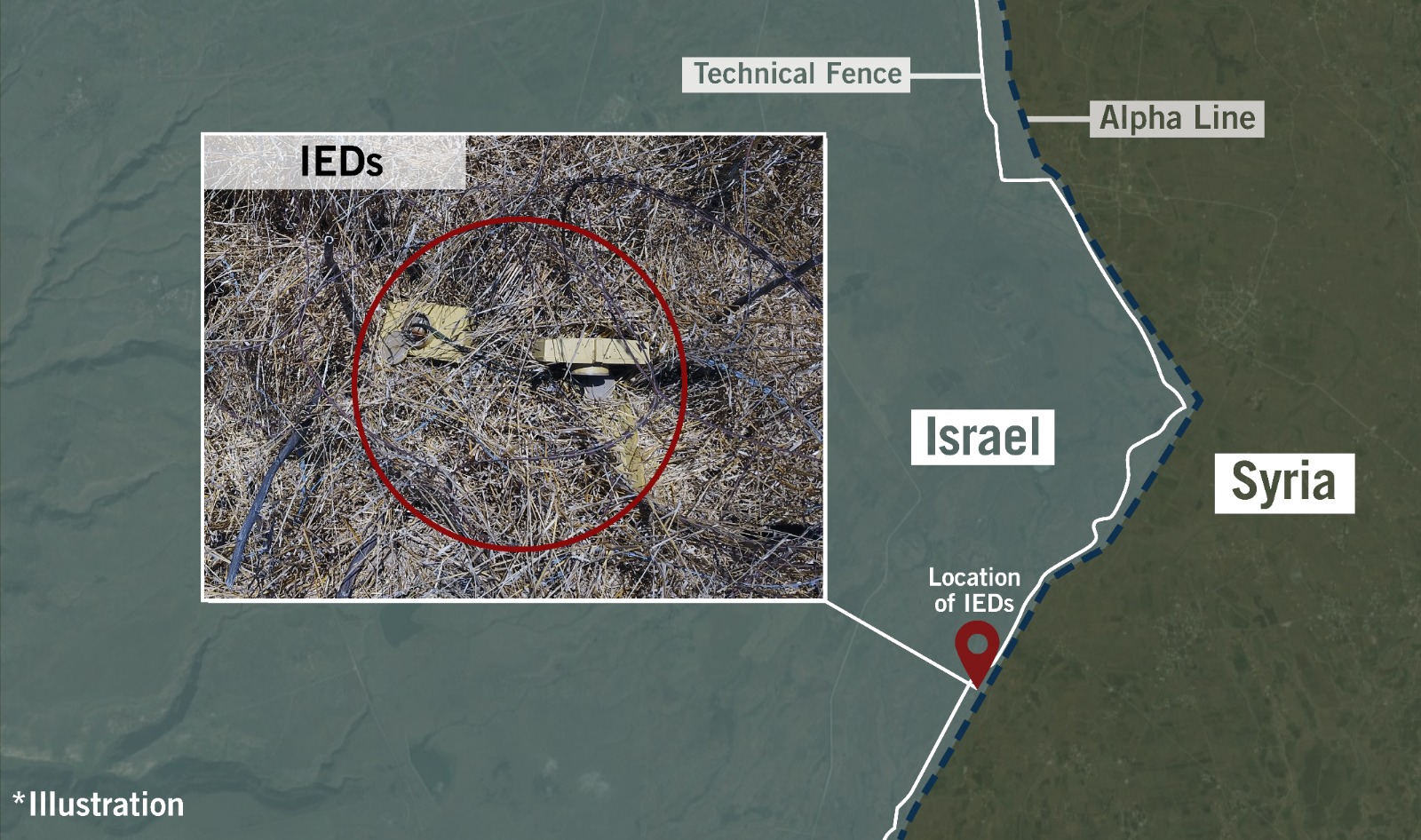 A map depicting the location of IEDs uncovered by the IDF along the border with Syria in the Golan Heights. Credit: IDF Spokesperson’s Unit.

The IDF said that in its overnight retaliation, aircraft hit storage facilities, headquarters and military compounds, as well as Syrian surface-to-air missile batteries.

“The Assad regime does not control southern Syria,” insisted Karmon. “Russia had promised that there would be no hostile forces within 80 kilometers of the border, but did not succeed in doing that. Yet apparently, it has reached the conclusion that it should give Israel a free hand. For many months, we have not heard any Russian responses [to reports of Israeli strikes], including serious attacks in the Damascus area,” he stated.

He added that “the Russian interest today runs parallel to the Israeli interest vis-à-vis the Iranians, who continue to be much more aggressive and who are trying to continue—unsuccessfully—to challenge Israel.”

‘A hole in the Iranian leadership’

After the U.S. drone strike assassination of Quds Force Commander Qassem Soleimani in January in Baghdad, his deputy, Esmail Ghaani, does not appear to have been able to formulate a new strategy that challenges the IDF, observed Karmon. “Today, we can say that the assassination created a hole in the Iranian leadership,” he said, describing it as a “strategic strike, perhaps much bigger than strikes on Iranian weapons transfers.” It also said that the military is on an elevated level of readiness and “is prepared for various scenarios.”

A recent report by the Israeli Alma Research and Education Center found that Hezbollah’s presence in southern Syria is significantly larger than previously known by the public.

The report revealed the location of 58 sites linked to Hezbollah’s activities in southern Syria in the Quneitra and Dara’a provinces, and listed two primary Hezbollah units acting under Iranian patronage as being responsible for this deployment: The “Southern Command,” made up of veteran Hezbollah operatives embedded in the ranks of the Syrian Armed Forces; and the “Golan File” unit, which involves Hezbollah commanders orchestrating localized terror cells, made up of Syrians.