Greater awareness over the presence of China in worldwide technology and infrastructure spheres competing directly for influence against the United States will require more careful consideration of the type of investments allies such as Israel accept from China.

A panel of experts from three think tanks from the United States and Israel came together on April 29 for a discussion titled, “Aligning U.S.-Israel Cooperation on Technology Issues and China.”

The experts were representatives from a collaborative project that is expected to release a report in the coming months with strategies on how to foster bilateral cooperation between Israel and the United States in getting both nations on the same page when it comes to their threat perception of China.

The virtual panel was moderated by Ilan Goldenberg, director and senior fellow of the Middle East security program at the Center for a New American Security (CNAS) and featured former U.S. ambassador to Israel and distinguished visiting fellow at the Israel-based Institute for National Security Studies (INSS) Daniel Shapiro; Shira Efron, senior research fellow at INSS; Jacob Nagel, former head of Israel’s National Security Council and senior fellow at the Foundation for Defense of Democracies; and Martijn Rasser, senior fellow for the technology and national security program at CNAS.

Shapiro recalled how in 2015, Israel rehabilitated its port in Haifa and hired a Chinese company to do the work. At the time, nobody in the U.S. intelligence community contacted Shapiro to indicate that the selection of a Chinese contractor would be a problem for the United States.

“Fast-forward about three years, about 2018, and suddenly Israel was hearing all kinds of alarm bells going off from the U.S. Navy, from the intelligence community, from all sorts of people in the U.S. defense community about the prospect of China being a major investor and operator of a port in which the U.S. Navy operated,” said Shapiro. 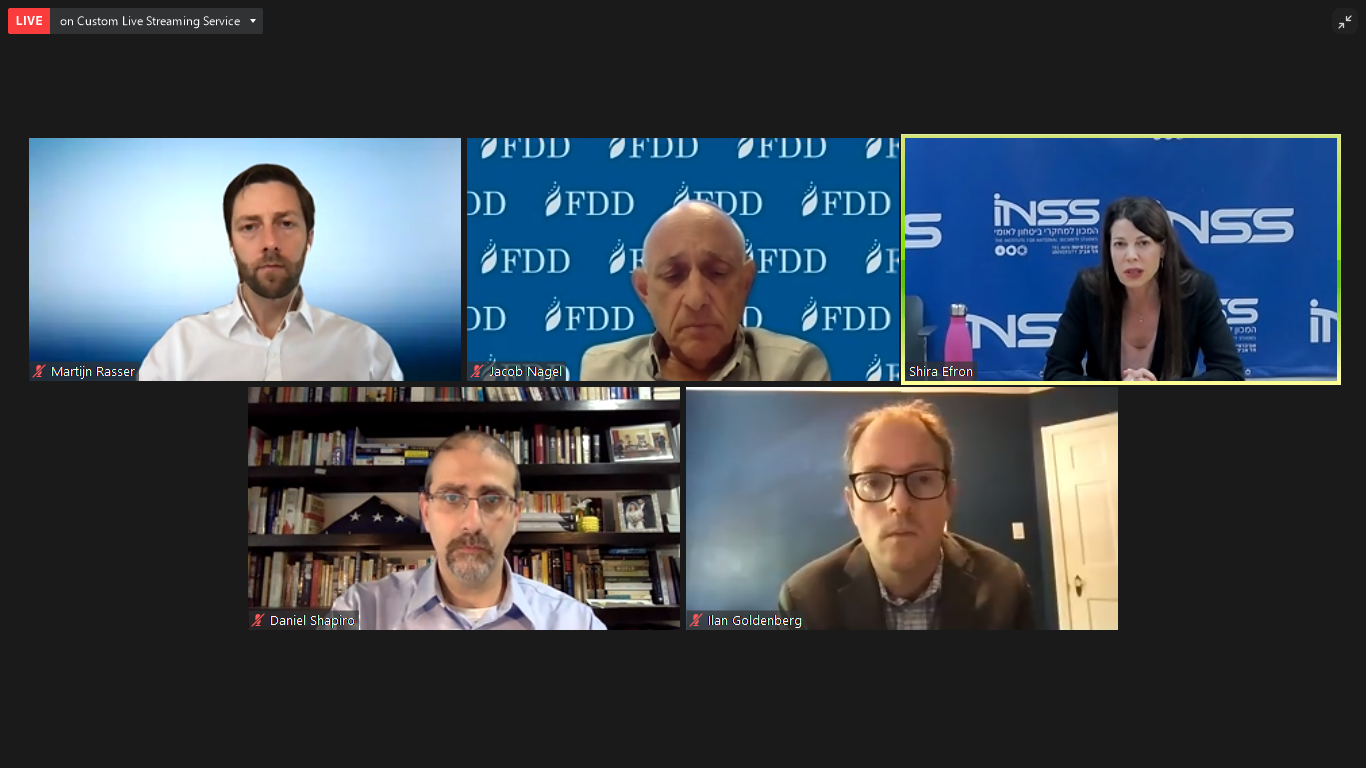 The virtual panel was moderated by Ilan Goldenberg, director and senior fellow of the Middle East security program at the Center for a New American Security (CNAS) and featured former U.S. ambassador to Israel and distinguished visiting fellow at the Israel-based Institute for National Security Studies (INSS) Daniel Shapiro; Shira Efron, senior research fellow at INSS; Jacob Nagel, former head of Israel’s National Security Council and senior fellow at the Foundation for Defense of Democracies; and Martijn Rasser, senior fellow for the technology and national security program at CNAS. Source: Screenshot.

Shapiro told the story to illustrate how the issue has grown in importance in the past decade, as tensions between the United States and China has grown, along with awareness of the vulnerabilities posed by Chinese technology in vital infrastructure.

While America and Israel had reached an agreement in 2005 to prevent Israel from exporting defense systems to China, trade between Israel and China in other economic sectors has expanded, with China now Israel’s second-largest trading partner.

But even innocuous technologies such as artificial intelligence could have both civilian and military purposes with little adaptation and China is known for not making a distinction.

Shapiro called the process of absorbing civilian technology into the arsenal of the People’s Liberation Army, military-civil fusion. These technologies could be used for surveillance, censorship, disinformation and curtailing the rights of Chinese people.

“And, of course, China also has been known to use economic investments to gain leverage over countries in which it invests and then uses that leverage for coercive purposes,” said Shapiro.

In Israel, said Shapiro, while the defense and security segments are taking the Chinese threat into account, it’s different for the private market, especially technology sectors, which could lose significant amounts of investment if they do not have a good alternative to China and the sector’s relationship with China is unregulated.

“United States still has work to do to establish that comprehensive set of its own rules, a comprehensive set of alternatives for allies like Israel who forego cooperation with China,” said Shapiro. “And to build that collaborative technological innovation framework that builds on the cumulative strengths of the U.S. and its allies and benefit them all while helping tip the balance in the technological competition with China.”

Israel’s interests should align with America’s

Nagel, who presented his opinion on what the Israelis may be thinking on the issue, said that he doesn’t think there should be any question of who Israel should side with, even if the United States is working to re-enter the 2015 nuclear deal with Iran.

Israel’s interests in this matter, he said, should be the same as that of its closest ally, the United States.

He said that part of the reason the working group considered this topic, is that there is a need for Israel to be more careful with Chinese investment going forward.

“I think Israel, should take the Chinese very seriously [about] their ambitions to not conquer but to acquire some of our technologies, spending some more money to get big technologies to control some of our infrastructure, even sometimes critical infrastructure, or very, very problematic technologies,” said Nagel. “There are some people in Israel, some of them they have their own interests, they don’t see the overall picture of the damage that can be caused and sometimes they don’t care because they have their own interests.

The small benefits gained by companies that seek Chinese investment or share technologies with China could end up doing massive damage to Israel’s relationship with the United States, he continued.

The United States, he added, will not want to work closely with even an ally unless it has the assurance that its investments and knowledge would not spill over to China. “[If] we want to cooperate with the United States, we have to understand there are things we cannot do with China,” he said.

Efron was asked to preview some of the recommendations that will be included in an upcoming report that the group will be sharing with government officials and then the public in the coming months.

He said that it is clear the United States and Israel have very different approaches to China, and that a bilateral, multiagency working group must be established on China.

“Because of so many cross-cutting issues, we believe that it should be led by both country’s national security councils with different representation. We have some specific accommodations in the paper itself at what level and who should be in charge,” said Efron. “This big overarching work group in turn should be informed by their subgroups, each of which should be managed at a different level by different agencies.”

The plan divides the subgroups into a strategy group, regulation group, economic and technological incentive groups.

Even after being in these groups, she said, there is no expectation that the United States and Israel would be completely on the same page, but it would help prevent misunderstanding. “The onus here would have to be on the U.S., because we know that intelligence-sharing on this issue has already improved and that is great, but it would have to grow,” said Efron.

She agreed with Shapiro that the United States needs to have better-defined guidelines for what is acceptable or not with regards to doing business with China.

“I don’t think it’s going to be that easy because Israel is reluctant to regulate technology at all for very good reason,” she said.

Efron continued to describe the various groups included in the plan such as the strategy group, the investment regulation group and the incentives group.

Rasser said that what he found exciting about the collaborative effort towards making the report was that a framework was created that could be used for the same purpose with other nations allied with the United States.

“Ultimately, what I see these constellations of bilateral efforts and many lateral efforts leading towards is you want to create a true tech alliance where you have a core group of tech leading democracies, really aligning themselves on some key issues,” explained Rasser.

Still, the working groups will be needed in cases where self-regulation is not sufficient.

Efron agreed with Shapiro that the public statements from former U.S. President Donald Trump had a cooling effect on Chinese investment among technology companies. She noted another report from the INSS that estimated 7 percent to 10 percent of investment in Israel in 2020 coming from China.

She said that Israel would have to consider whether that percentage of investment is worth creating tensions between itself and the United States.

The discussion, which lasted an hour, did not reveal the date of the upcoming report’s release.

The post How can the US and Israel better align to meet the challenges posed by China? appeared first on JNS.org.