The Israel Defense Forces’ elite naval commando unit, Shayetet 13, has been making nonstop deliveries of oxygen cylinders to civilian care facilities that were struggling to get hold of supplies in recent weeks as hospitals raced to stock up on their own oxygen tanks.

The Shayetet 13 Unit is the navy’s marine commando unit that operates at sea, on land and in the air, and is known for its daring operations. During normal activities, it’s designed to be able to inflict strategic damage to enemy maritime infrastructure and gather critical intelligence. While the unit’s core activities have not been harmed, it has taken on a new role during the coronavirus pandemic due to its extensive experience in scuba-diving and the ability to compress oxygen gas into cylinders.

In recent weeks, a number of teams from Shayetet 13 have developed solutions for civilians in need of oxygen cylinders for medicinal purposes. Maj. N (full name withheld), head of the project, told JNS about some of those efforts.

“In Atlit [where the unit is based], there is a kind of small factory for compressing oxygen,” he said. “We saw that nursing homes and organizations that care for vulnerable populations had a bit of a hard time getting hold of oxygen cylinders. We carried out a conversion of our factory and began producing two main products.”

The first of these is a service for civilian organizations, in which they send over empty oxygen tanks and the Atlit center compresses oxygen into them and returns the cylinders ready for reuse. Shayetet 13 is also responsible for the logistical operation of picking up, disinfecting and delivering the cylinders. In the past three weeks, it has delivered more than 500 oxygen tanks with compressed oxygen to care centers around the country. 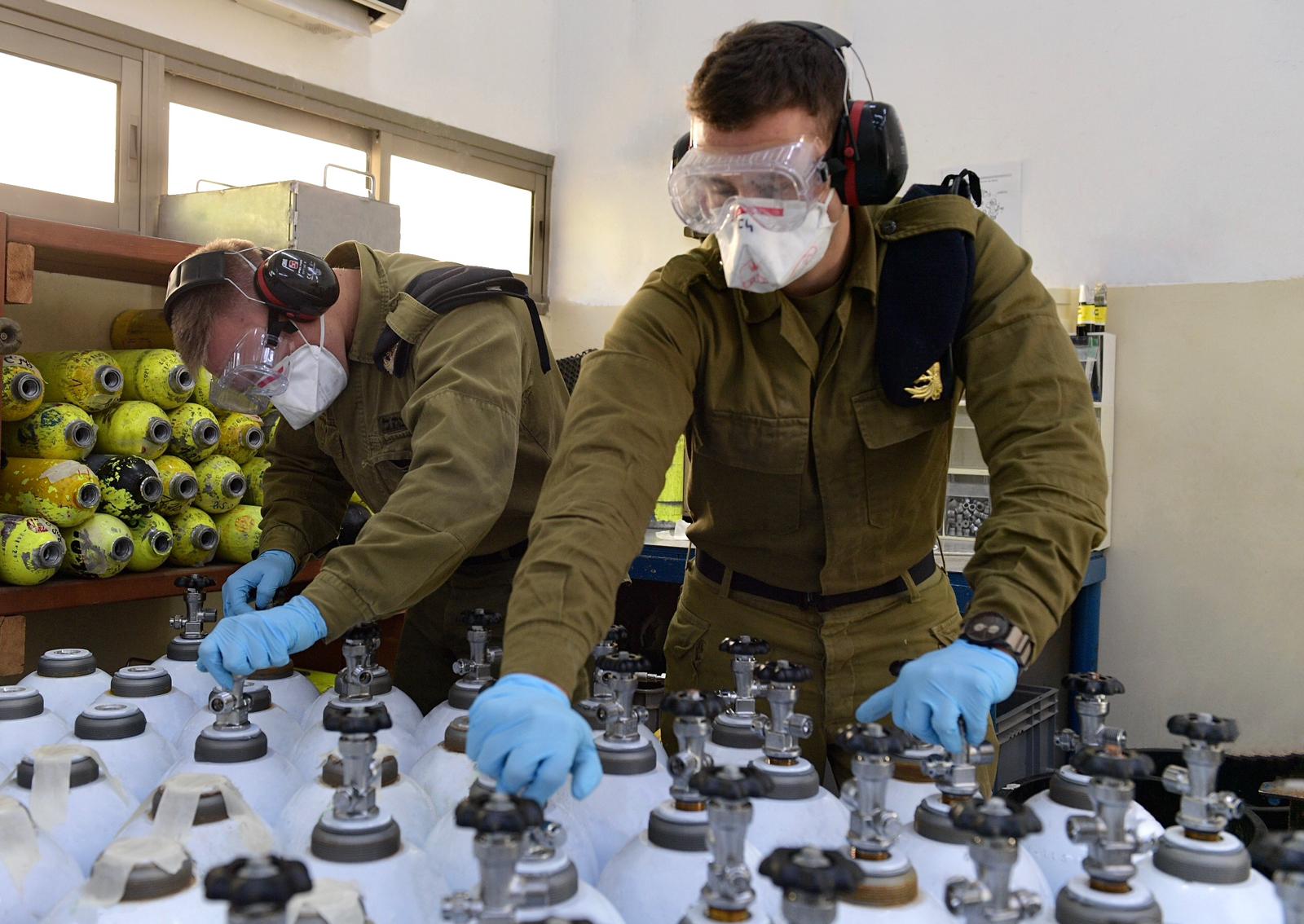 Shayetet 13 is also responsible for the logistical operation of picking up, disinfecting and delivering the cylinders. Credit: IDF Spokesperson’s Unit.

“The second product is something that we have developed in Atlit. We take a 12-liter cylinder, which is relatively bigger than the usual oxygen cylinders, and fill it up—up to 150 to 200 units of atmospheric pressure. We install a faucet and an adjustment control, and then deliver it to those in need. This service includes the entire logistical delivery package,” said Maj. N.

The unit receives phone and email requests from civilian centers asking for the equipment and services, and the request is examined by the national coronavirus control center at the Sheba Medical Center at Tel Hashomer. After receiving approval from the Health Ministry and the IDF Medical Corps, the unit springs into action.

“At the moment, this provides a solution to institutions that cannot get hold of their own supply. For example, a center for people with special needs that struggled to get hold of oxygen tanks because of hospital demands,” related the officer.

An additional service provided by the unit is the repair and upgrade of cylinders. The United Hatzalah volunteer medical service sent 200 cylinders to the naval commando unit, which carried out an examination and repair service.

The officer said that the assistance does not come at the expense of any of the unit’s main security missions, stressing that “our main goal is to create security activities, and we do this continuously.”

He added that the unit uses gaseous rather than liquid oxygen, meaning that hospitals, which rely on liquid oxygen, are not negatively affected by the unit’s activities.

Shayetet 13 is on standby to provide additional services in case of a sudden deterioration of the health situation, he said. Places like senior homes “are not built for a sudden breakdown in oxygen supplies or for a national disaster. We took it on ourselves to provide them with assistance and to prepare to help them further if necessary.”

Organizations that have benefited, such as the Yad Sarah national volunteer organization that delivers medical equipment to the elderly and homebound population, have sent the unit photographs of people receiving the oxygen treatment, as well as children with special needs, and messages of thanks.

“Although we are not designed to deal with such things, we do not choose the responses that we need to provide. This is the need of the hour,” said Maj. N.

Instructing children, feeding those in need

Meanwhile, the IDF’s Education and Youth Corps is leading a program in which IDF personnel care for the children of frontline medical personnel, enabling the hospital staff to show up for their round-the-clock shifts.

Lt. Col. Yaarit Gozlan, head of the Gadna and Nahal Unit, directs the Educational Framework project, which is designed to relieve pressure on hospital staff.

“We are focused on the effort of setting up educational frameworks for children of essential Health Ministry workers,” she told JNS. “This includes all of the nurses who working in the coronavirus wards.”

“We began on March 22 and have grown from one day to the next until we ended up opening 49 child-care centers from north to south,” said Gozlan. 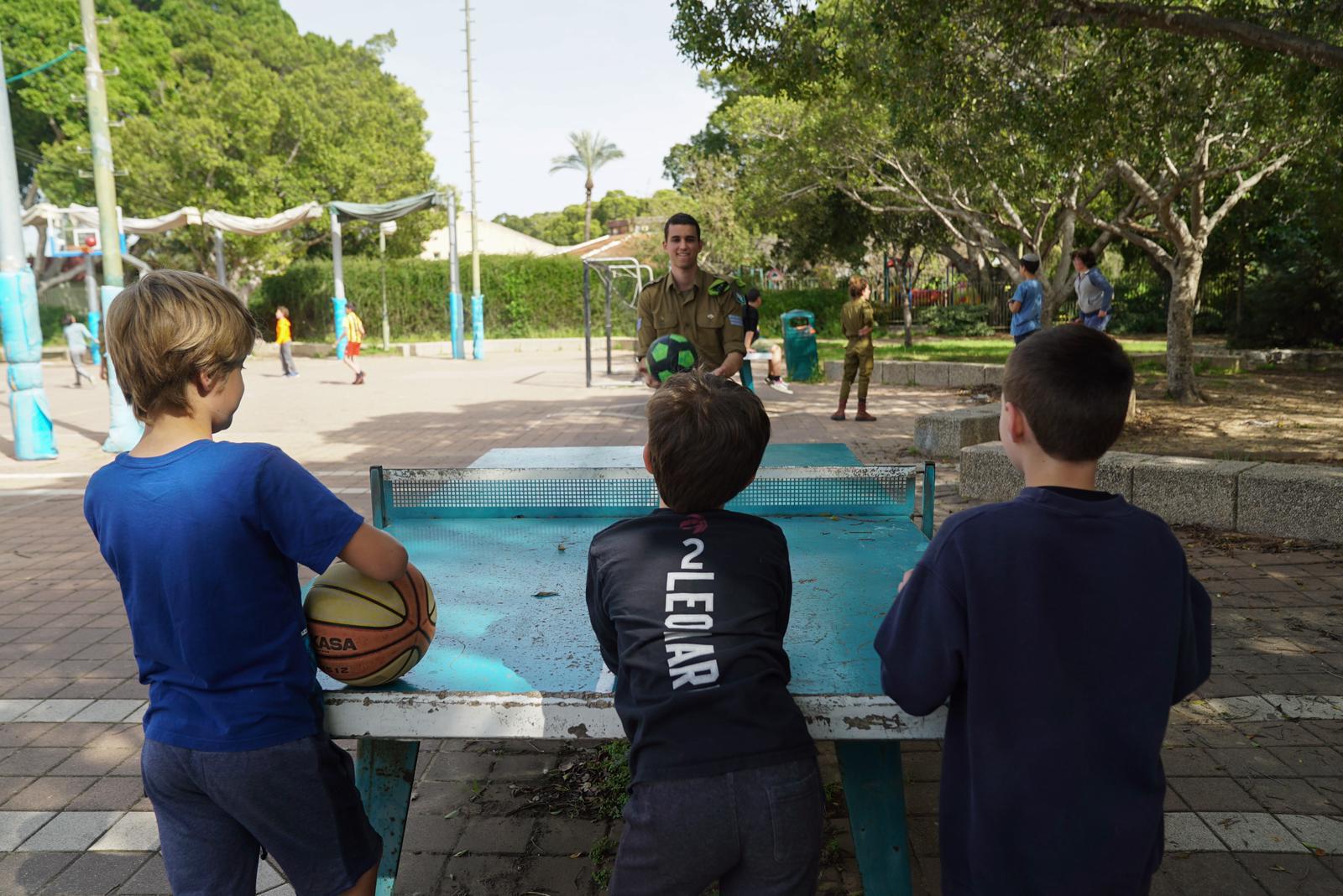 The initiative has seen soldier-teachers from Nahal and Gadna, a military program that prepares youths for service, activate the care centers on a daily basis and supervise children ages 4 to 12. Credit: IDF Spokesperson’s Unit.

The initiative has seen soldier-teachers from Nahal and Gadna, a military program that prepares youths for service, activate the care centers on a daily basis and supervise children ages 4 to 12.

Children have their temperatures taken at the entrance to the centers, and together with the staff, are equipped with masks and gloves under meticulous regulations to ensure that no infections take place.

“To support this program, we created a counselor control center made up of highly creative soldiers from our unit. They prepared teaching material and activities to help the children mark recent days like Passover, Remembrance Day and Independence Day,” described Gozlan.

The centers are active from 7 a.m. until the evening hours, an effort Gozlan said was “not simple” to implement, particularly when large numbers of children are involved. “But our soldiers are very knowledgeable about working with civilian populations, which they do during routine times, though usually with teenagers,” she added. “They were able to adapt to this very well.”

The program caters to some 1,600 children around the country and is being run in coordination with the Education Ministry. “Our soldiers understand this is the national mission and the significance of their contribution. That we need to help free up medical personnel,” said Gozlan.

The fact almost all of the soldiers were youth-movement counselors means that instructing children is second nature to them, she added. “We are receiving incredible feedback from the medical personnel. Doctors who come in the morning know the names of soldiers, and we have received lots of thank-you messages.”

In addition, at the end of April, the IDF Home Front Command conducted a large-scale food-distribution operation and corona testing in the Galilee Arab village of Deir Al-Assad, which had experienced a jump in virus-case numbers. The operation was designed to ensure that families had sufficient food for the Ramadan holiday, and that those who needed to could easily arrive at a drive-through testing center.

While overseeing operations at the food-distribution center, Col. Guy Berger, head of the Home Front Command’s Northern District, said “we will do whatever it takes to help these dear people get over this illness.”