Trump’s plan the ‘best deal’ Israel’s right will ever get, US official says

The US peace plan has trapped the Palestinians

Israel launched a broad wave of precision airstrikes early on Wednesday morning, hitting dozens of Iranian and Syrian military targets, and sending a very strong message that Israel is rejecting Iran’s attempt to force new “rules of the game” against it.

Most of the Iranian military targets that were hit were situated within Syrian military bases, underlying the Iranian tactic of embedding and disguising its threatening presence within the Syrian Arab Army.

According to international media reports, 23 people, including 16 “foreigners”—an apparent reference to Iranian operatives—were killed in the strikes.

The Israeli action came in response to an Iranian-directed rocket attack on Tuesday morning, in which projectiles were launched from the Damascus area in the direction of Israel. An Israeli Iron Dome battery intercepted the four rockets, which set off warning sirens in northern Israeli communities.

That rocket attack could be linked to a reported Israeli strike on a key Iranian military installation in the Damascus area this week, though Israel has not commented on such reports.

Iran is continuing its efforts to build a war machine in Syria and entrench itself militarily by moving weapons, military forces, militias and building missile bases on the territory controlled by the Bashar Assad regime. The goal of Iran is to build a second Hezbollah in Syria and to move its own military capabilities into the area so that it can threaten Israel from multiple fronts. 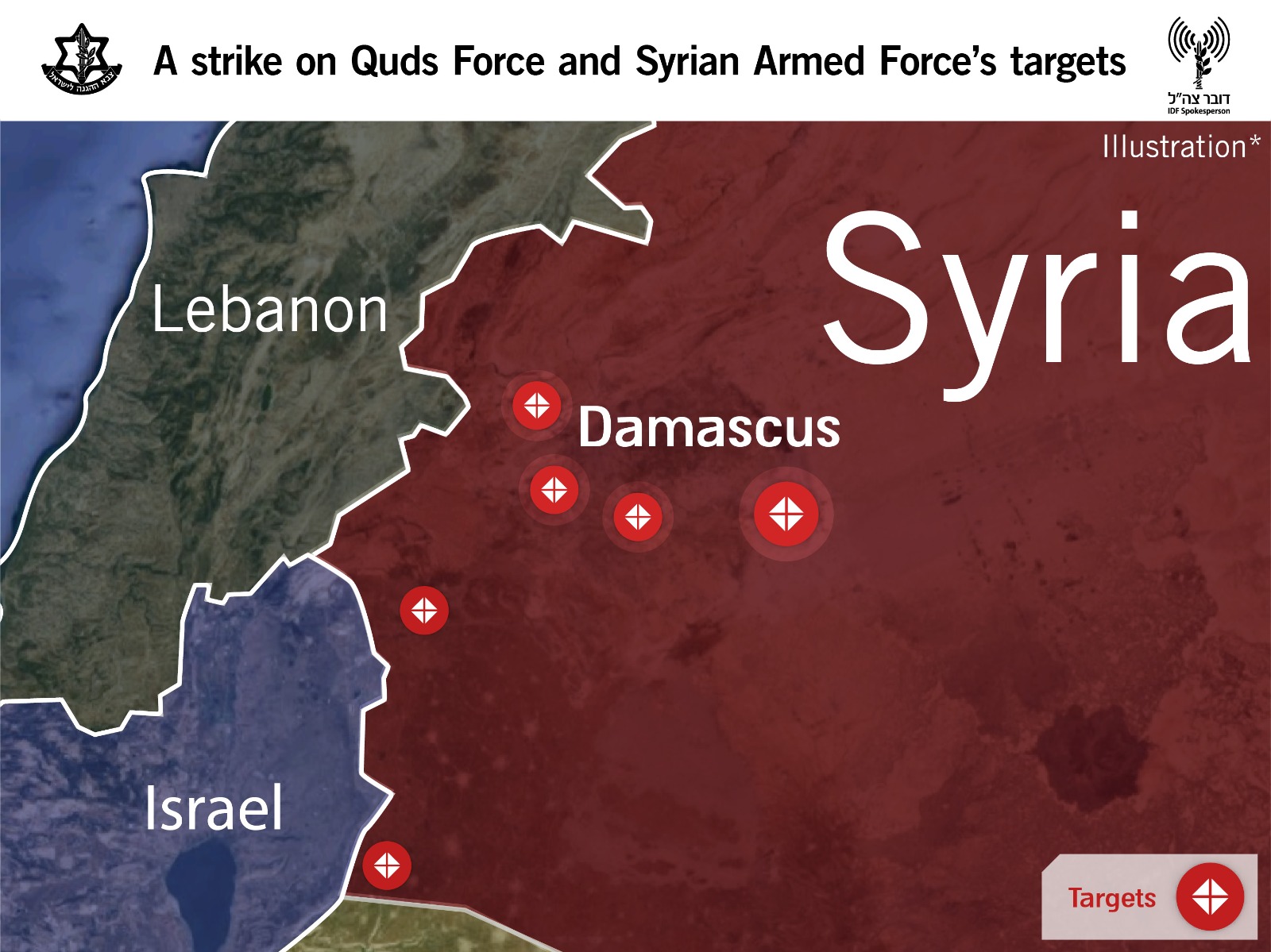 An IDF map of where it carried out air strikes against Iranian and Syrian targets on Nov. 20, 2019. Source: IDF Spokesperson’s Unit.

Israel has been pursuing an active campaign of removing these threats as it detects them, taking the initiative, and relying on high-quality intelligence and precision firepower to deal with the ongoing Iranian challenge from Syria. The goal is to nip the threat in the bud and not wait until it takes on monstrous proportions, as Hezbollah’s rocket and missile arsenal has become in Lebanon.

The Quds Force, Iran’s overseas special operations unit, is in charge of the Iranian expansion program in Syria. Its commander, Gen. Qassem Soleimani, has attempted to enforce new rules on Israel, according to which any Israeli preemptive strike will result in Iranian retaliation.

This Iranian equation is essentially designed to deter Israel from taking the initiative and removing threats to its security preemptively. Iran wants to impose a “price tag” on Jerusalem for the active defense campaign that Israel has been pursuing with much success. Hundreds of Israeli airstrikes in recent years have prevented the Iranians from achieving most of their goals in Syria, leading to frustration in Tehran, though its confidence has been rising recently.

The successful Iranian cruise missile and drone attack on Saudi state-oiled oil fields on Sept. 14 were a display of highly advanced, long-range firepower. The Iranian attack was a threat directed at Israel as much as it was to Iran’s other regional arch-foe: Saudi Arabia. Israel heard the message and sent one of its own on Tuesday, rejecting Iran’s attempt to deter it from taking action in the region to defend itself.

It appears as if the Iranians absorbed a painful blow in Syria, just as they did in May 2018 during “Operation House of Cards,” when Israel struck a series of Iranian targets in response to an Iranian truck-mounted rocket attack.

Iran now has three options going forward: It can choose not to respond, launch a minor response or order a more significant response.

The fact that the regime is under pressure at home due to domestic unrest, that its economy is bleeding due to biting American sanctions, and that it is facing unrest in other zones of influence—like Lebanon and Iraq—means that Iranian decision-making may become more unpredictable going forward.

‘We are prepared for any scenario’

Speaking to reporters on Wednesday after the strike, Israel Defense Forces’ spokesman Brig. Gen. Hadi Zilberman stressed that the IDF still has the initiative. “We will not allow Iran to entrench itself in Syria,” he said.

“We prepared a battle procedure that included deployment of air defense and attack preparations. The wave of strikes was broad in its targets.”

According to an IDF statement, dozens of targets were struck in the Damascus area, south and west of Syria’s capital, and on the Syrian Golan Heights near the Israeli border.

In addition, the Israeli Air Force destroyed Syrian surface-to-air missile batteries that are considered advanced after they fired at Israeli aircraft. Syrian weapons storage facilities, military headquarters and observation posts were all destroyed by Israeli aircraft.

When it came to the Iranian assets, the IAF demolished Iranian military buildings, a headquarters situated in Damascus International Airport and an observation post on the Golan Heights.

“We acted against the Syrian host and the Iranian guest,” said Zilberman.

Outlining Israel’s posture, he assured that “we are prepared for defense and offense, and we will act with severity against any attempt to respond. We are prepared for any scenario. We will not accept Iranian entrenchment. This is a red line.”

It also appears as if the Assad regime keeps failing to heed Israel’s warnings to refrain from joining the Iranian-Israeli showdown, and Syria’s decision to fire surface-to-air missiles resulted in a loss of a number of its air-defense batteries.

Referring to Tuesday’s rocket attack on the Israeli Golan, the IDF stated, “Yesterday’s Iranian attack towards Israel is further clear proof of the purpose of the Iranian entrenchment in Syria, which threatens Israeli security, regional stability and the Syrian regime. Furthermore, the IDF holds the Syrian regime responsible for actions taken in its territory and warns it from operating or allowing hostilities against Israel. Such actions will be followed by a severe response. The IDF will continue operating firmly and resolutely against the Iranian entrenchment in Syria.”

Israel has heard Iran’s message and sent its reply. The ball now returns to Iran’s court.

The post In Syria strikes, Israel sends a strong message to Iran that it will not be deterred appeared first on JNS.org.