More than 30 of influential pro-Israel advocates participated in a special Knesset panel to address the diplomatic challenges Israel faces amid a growing wave of global anti-Semitism and anti-Israel media bias.

The panel was the result of a recent feature designating the “JNS top 40 global advocates for Israel online.” All 40 of the designees were invited on Tuesday to participate in a special meeting of the Subcommittee on Israel-Diaspora Relations chaired by Knesset member Michal Cotler-Wunsh, who was also included in the ‘Top 40’ list.

Titled “Meeting with JNS Top Advocates for the Jewish State: Recognition, Learning, Trends, Analysis and Preparation for 2021,” it took place simultaneously at the Knesset, as well as via Zoom.

This network of independent online advocates plays a central role in presenting Israel’s narrative as a diverse, multicultural startup nation, with legal, historical and moral rights to build and sustain a Jewish and Democratic state in the ancestral homeland of the Jewish people. At the same time, the network is on the frontlines of a multidimensional battlefield to fight delegitimization, misinformation, boycotts, legal challenges, propaganda and classic anti-Semitism.

It was pointed out at the panel that the social-media presence of all of the advocates total 6.7 million followers—a figure that doesn’t begin to scratch the surface of the total reach of the collective group.

Panelists noted the difficulties that the Israeli government faces in playing a central role of defending the Jewish state’s rights around the globe, making the network of self-motivated advocates all the more critical.

Deputy Mayor of Jerusalem Fleur Hassan-Nahoum called the panelists “brothers and sisters in the war against delegitimization,” and noted that “we are all ambassadors for Israel in all different shapes and forms.”

She explained that the work of defending Israel on the government level is split across half a dozen government ministries “without a central command system,” and said such an arrangement is like “having the IDF [Israel Defense Forces] fighting without a HQ [headquarters].”

It is specifically “because of this vacuum” created by the government that “you have wonderful dedicated people step up to the plate to do the job,” she said, adding her hope that a cohesive government strategy can only be formed “once we realize that we are fighting a war.”

‘Take over the conversation on social media’

Knesset member Tehilla Friedman, a member of the Knesset’s Diaspora Affairs committee and chair of the subcommittee on religious education, renewal and Jewish identity, called the meeting “revolutionary” and said the event should not be limited to the realm of Diaspora relations. “The framing should move to being about diplomacy,” she said, noting that the work of the advocates is “an important element of our national security in Israel.”

While many of the advocates efforts are focused directly on parliaments around the world, and in international forums—such as the United Nations and the International Criminal Court—others are focused on fighting against campus boycotts and delegitimization, or online anti-Semitism. Others still focus on engaging and connecting Jews abroad with the Jewish state, and training more supporters of Israel’s rights to become active pro-Israel advocates, thereby expanding the network. 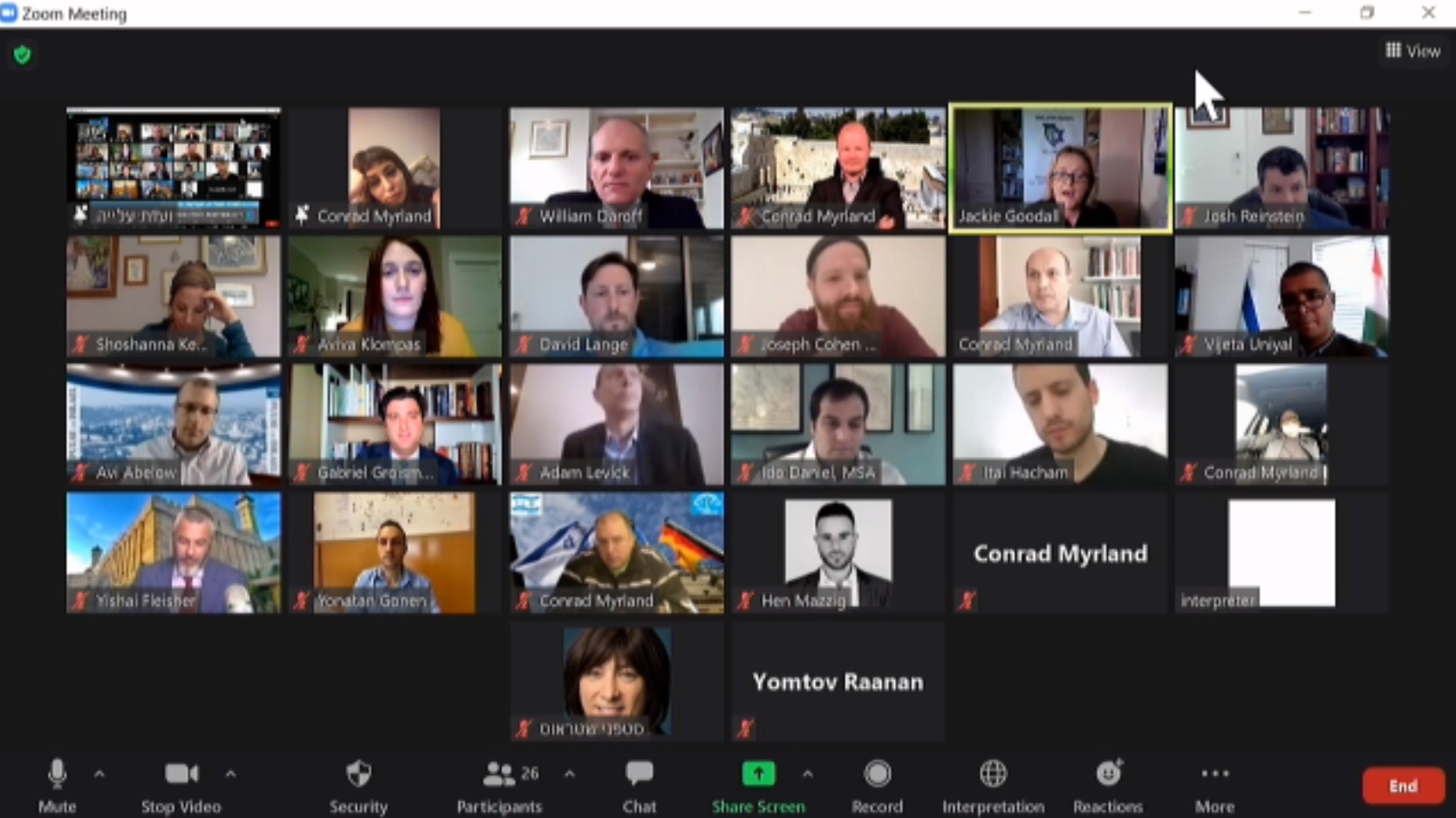 The participants of the “Meeting with JNS Top Advocates for the Jewish State: Recognition, Learning, Trends, Analysis and Preparation for 2021,” which took place simultaneously at the Knesset, as well as via Zoom. Source: Screenshot.

Former Knesset member Dov Lipman said that “each organization does incredible work individually. But the other side [of anti-Israel combatants] is very unified and coordinated with its messaging. We must be that way as well.”

He proposed that when necessary, “all of the organizations post the same material at the exact same time, whether it’s a video or a message,” in order to “take over the conversation on social media.”

He said such a strategy “has to be well-planned and strategized, but it will be a game changer and finally put Israel on the strong offense online.”

Arsen Ostrovsky, executive director of the Israeli-Jewish Congress, called on the pro-Israel community to focus more on “telling Israel’s story and not allowing our detractors to define us.”

He said “for too long, we have looked at Israel almost exclusively through the lens of the conflict with the Palestinians,” and urged “broadening the conversation and never forgetting that the Jewish state has perhaps the most compelling story in modern history—a story of hope, of courage, of freedom, innovation and resilience.”

Arab-Israeli Yoseph Hadad, a staunch advocate for Israel, said for Israel to reach the greater Arab world with its messages of peace, “it is an imperative that Jews and Israelis learn to speak Arabic.”

He noted that “we are fighting for the hearts and minds of the next generation. We are engaging with them in only greater numbers. Our community is resilient and strong. We come together as a unified front to fight back against this ancient hatred, together with those of good faith around the world. We have built a movement. And we won’t stop.”

Cotler-Wunsh said “it is both an honor and responsibility to be featured among the JNS’ ‘Top 40’ list of advocates for the Jewish state with such notable voices. I am thankful to have been able to utilize this opportunity, as chair of the subcommittee on Israel-Diaspora Relations, to gather the overwhelming majority of these important voices in Knesset.”

She added that “it is imperative that the State of Israel learn from their expertise and recognize them as role models advancing and protecting the rights of the Jewish people and the existence of Israel as Jewish and democratic. I hope that this is the first of many engagements between this group, the Knesset and Government, and beyond.”