In wake of antisemitism spike, here’s how Jewish institutions should be thinking about security

Israel's new government gets to work after Netanyahu ouster

An agreement was signed in Abu Dhabi to launch a joint Israeli-Emirati water research program as part of a collaboration between the Israeli Watergen company and Baynunah, a sister company of Al Dahra Group, an Emirati agriculture group that specializes in food security.

It will also be working with the Moshe Mirilashvili Institute for Applied Water Studies at the Tel Aviv University.

“Tel Aviv University has a strong commitment to excellence in research and to extensive international collaboration,” said Shamir. “Research at the joint water program will build on our special academic strengths, and will open a path for collaboration with the UAE in other mutual areas of research, as well as to student and faculty exchange programs.”

In addition to academic cooperation, Watergen and Baynunah laid the cornerstone for a Watergen production facility in the UAE. The joint venture will also commercialize similar facilities in the Gulf States and Africa.

Watergen’s technology enables the production of top-quality clean water solely from the air. Its devices use a standard connection to electricity or other alternative energy sources, such as solar panels, and can produce up to 6,000 liters of fresh drinking water per day.

Its devices are deployed in more than 80 countries around the world and are located in remote villages, hospitals, city centers, public parks, schools, office buildings and even in disaster-struck areas.

“The Abraham Accords has given countries in the Middle East the opportunity to improve and advance relations in various fields,” says Mirilashvili. “Thanks to the agreements, we—an Israeli company—are able to cooperate with our Middle East neighbors to solve one of the region’s difficult problems: water scarcity.”

He continued, noting “throughout history, conflicts have been centered around controlling water sources. Today, we are doing the opposite: building peace and a common future around a groundbreaking Israeli technology to provide a plug-and-play solution that allows all residents of the UAE and the world unlimited access to off-grid, pure drinking water.” 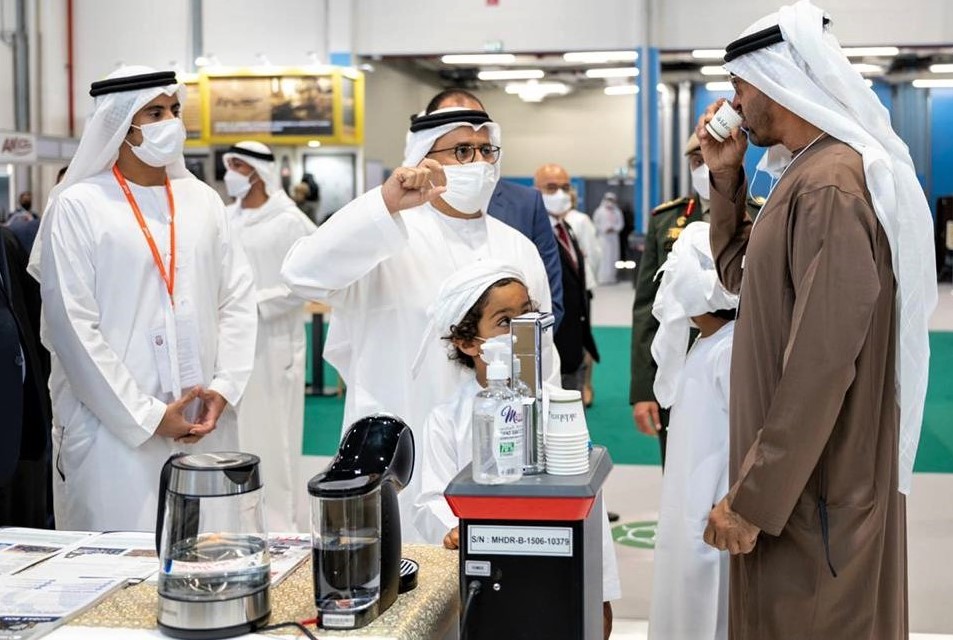 Tasting water in Abu Dhabi after an agreement was signed to launch a joint Israeli-Emirati water research program as part of a collaboration between the Israeli Watergen company and Baynunah, a sister company of Al Dahra Group, an Emirati agriculture group that specializes in food security, May 2021. Credit: Watergen.